A Land Fit for Heroes

The end of World War I enabled equipment to be gradually become available to the Transport Department to be able to repair equipment that had suffered from reduced maintenance during the war and also to be able to extend operations. In 1919 ten new cars were purchased from Brush numbered 40 to 49 and it was decided to renew the track   at the outer end of the Bloxwich route. The possibility of creating a through service to Wolverhampton came a step nearer in 1921 when that town converted its tramways to conventional overhead electric supply but due to a low bridge at Horsley Fields the lack of single deck passenger cars at Walsall created another stumbling block. 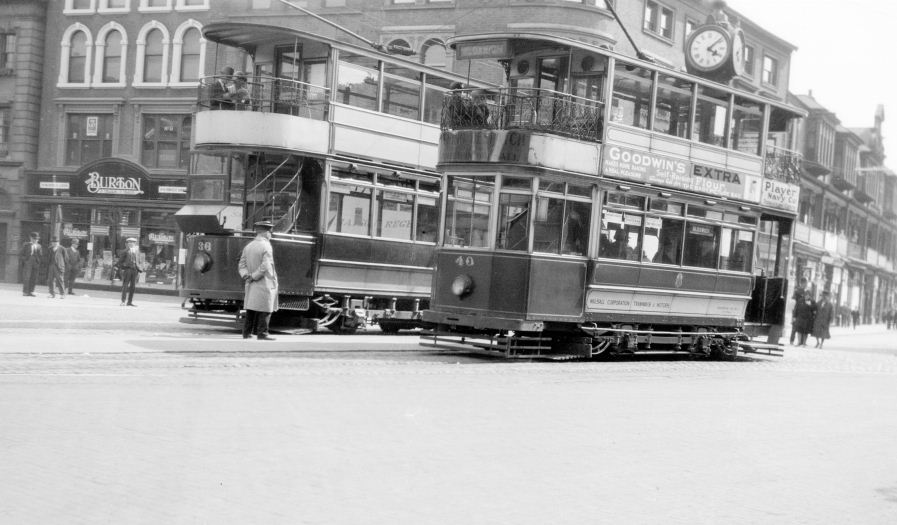 Walsall Corporation tramcar no 40 stands in the town centre in 1930, with South Staff’s tramcar no 36. Photographer H.Nicol

However other developments were taking place. New housing was being built in Walsall but unlike nearby Birmingham existing or new tram routes did not serve these areas. Likewise the new factory of J A Crabtree & Co was away from the tramway and served by the bus network which was now gradually expanding.

In 1923 the sections of line from the Pleck junction to the borough boundaries on the Wednesbury and Darlaston leased to the South Staffordshire (Lessee) Company reverted to the Corporation. To the public this made little difference but fares collected on these sections were now paid to the Corporation, the company being paid for the services operated. However, the future of the company’s operations was under threat as the leases on its lines in West Bromwich were due to revert to that corporation in 1924. Whilst that corporation did not want to actually operate trams, it did feel that improvements could take place and approached Birmingham to take over operation.

The company services to Wednesbury and Dudley were operated until 1939 by Birmingham Corporation and all other services including those joint from Walsall to Darlaston and Wednesbury were operated by the Wolverhampton & District Electric Traction Company.

From 1st October 1925 Walsall Corporation took over operation of the Willenhall – Darlaston tramway for a maximum of three years. The system was now at its maximum but it would not stay like that for long.