Going off the Rails

Birmingham Corporation continued to develop – and expand – its tramway network until 1929 but as long ago as 1922 it had already phased out one former tram route – the Nechells route – in favour of trolleybuses, or “trackless trams” as they were known at the time.  The decision was prompted in part, by the cost of reconstructing the worn-out track on the Nechells route, but also meant that the transport undertaking could continue to make use of the overhead electrical equipment and the municipally produced electricity.

The first replacement of trams by motor bus services took place in 1930, by which time some of the older trams were becoming life-expired at a time when other parts of the network were in need of track renewal.  The first service to be converted was the lightly used Bolton Road route, which was converted to small one-man operated motor buses in February 1930 and from then on increasing numbers of tram routes were converted to either trolleybus or, particularly after 1936, motor bus operation.

The onset of war in 1939 granted a temporary reprieve to a number of services that would otherwise have been abandoned sooner but although 26 tramcars were destroyed in air raids on the city, the remaining sections of the tramway itself survived intact until the end of the war.  Indeed, the tramway showed a remarkable resilience as temporary repairs bridging bomb craters frequently enabled tram services to be resumed before the road became passable to other vehicles. 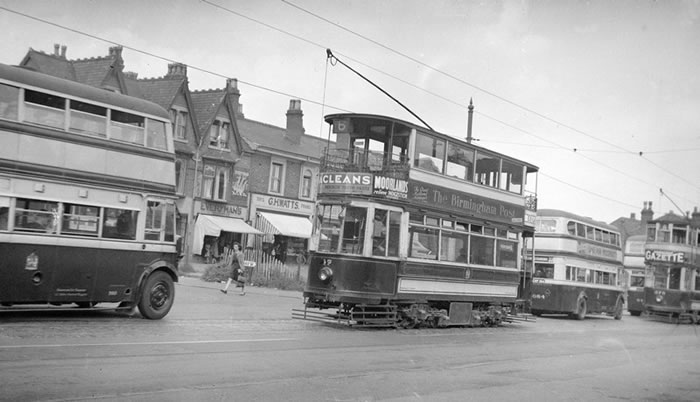 A view of motor buses and tramcars operating together in 1947. Photographer R.B. Parr.

As soon as the war was over, however, the routes that had already been earmarked for closure were abandoned and a general abandonment programme covering the remainder of the network was also announced, which culminated in the disorganised and unceremonious transition from trams to buses that took place on 4th July 1953. 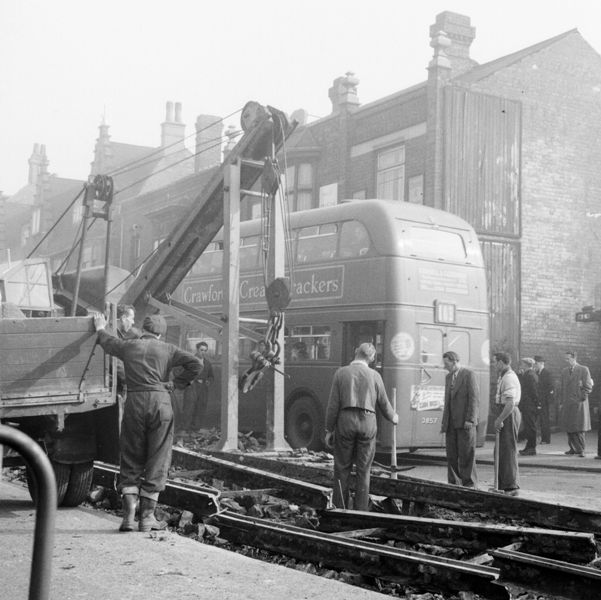 This photograph taken in October 1953, shows the continued work to remove tram track from Birmingham’s roads, three months after the closure of the system in July 1953.