The early development of Birmingham’s tramways was somewhat piecemeal and involved a number of false starts.  The first trams to run in Birmingham were drawn by horses and appeared in 1872, but for the subsequent three decades Birmingham Corporation was only authorised to construct tramways, which were then leased out to a variety of private operators.  Some of these used horse-drawn trams but various other means of propulsion were used, including steam, cable and electrically operated tramcars. 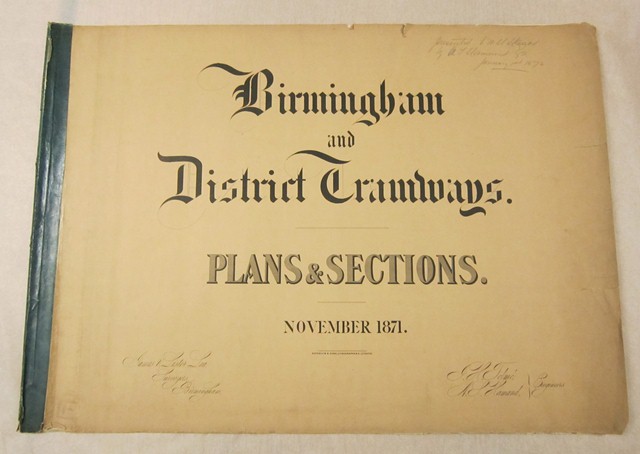 Original 1871 Birmingham and District Tramways Plans and Sections, that are part of the collections held in the John Price Memorial Library.

It was not until 1903 that the Corporation acquired the power to operate its own tramways and it then set about electrifying and expanding the still rudimentary network. It was quite an achievement that by 1914 – just over a decade after the Corporation’s tramway operations had commenced on 4 January 1904 – over 500 cars were in service on a rapidly expanding network. A quarter of a century later, in 1930, the total route length had been extended to 80.5 miles as the remaining private operators were taken over and new routes were opened both within the suburbs of the rapidly expanding city and also beyond to Wednesbury and Dudley, via both Oldbury and West Bromwich.  At the height of its development, Birmingham had a passenger fleet of 843 trams, of which a maximum of 825 were in service at any one time, operating out of 20 depots.  This made the tramway the fourth largest in the United Kingdom after London, Glasgow and Manchester though with a gauge of 3′ 6” it was easily the largest narrow-gauge tramway in the country. 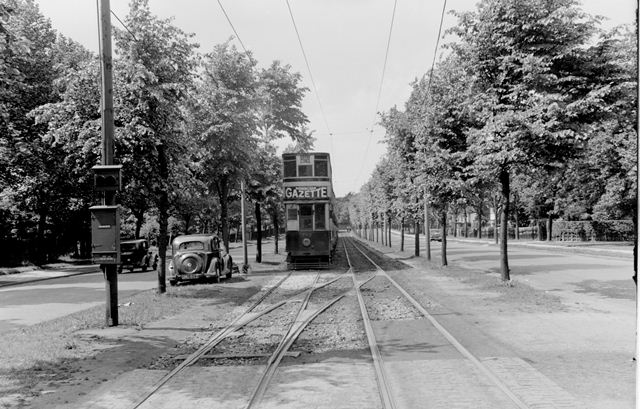 The rapid expansion of new routes serving newly built out-of-town suburban housing developments during the 1920’s enabled many working class families to move from overcrowded inner city locations to pleasanter and healthier surroundings while still enjoying affordable tram fares on the frequent and efficient services that connected the various parts of the city.  Birmingham Corporation was also a pioneer in its use of ‘reserved track’ configurations that segregated trams and motor vehicles by incorporating dedicated tracks down the middle of 120-foot wide dual carriageways, though some bottlenecks remained including much of the city centre and also the shopping districts of Selly Oak and Northfield.