‘Bluebird’ moves under its own power for the first time since 1957! 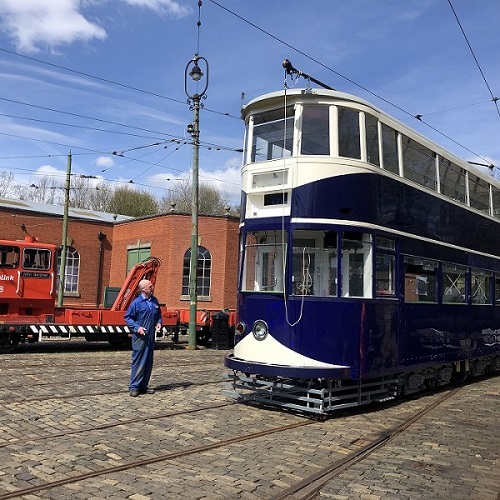 ‘Bluebird’ shining in the sunshine after its successful power test. Alongside is driver Ian Ross, President of the TMS and Chairman of the LCCTT (project funders)

Friday 22nd April was a momentous day at Crich when LCC No. 1 ‘Bluebird’ moved under its own power for the first time since 1957! LCC No. 1 has been undergoing a major restoration project at Crich since 2014 to restore it to its original condition, as built in 1932.

After running in London, LCC No. 1 was sold to Leeds City Transport in 1951 and ran there until 1957, when it was donated to the British Transport Commission and displayed in their Clapham museum. In 1972, the tram was donated to the Tramway Museum Society and arrived at Crich. Since then, it has been on static display (although LCC No. 1 has technically moved at Crich in the past, this was being towed by another vehicle, not under its own electrical power). April 22nd marked a significant milestone in the project and reflects the many hours of painstaking work carried out to reinstate the electrical system.

The restoration is making good progress thanks to the hard work of Museum staff and volunteers, with the project being generously funded by the London County Council Tramways Trust (LCCTT). Keep checking back for more updates!