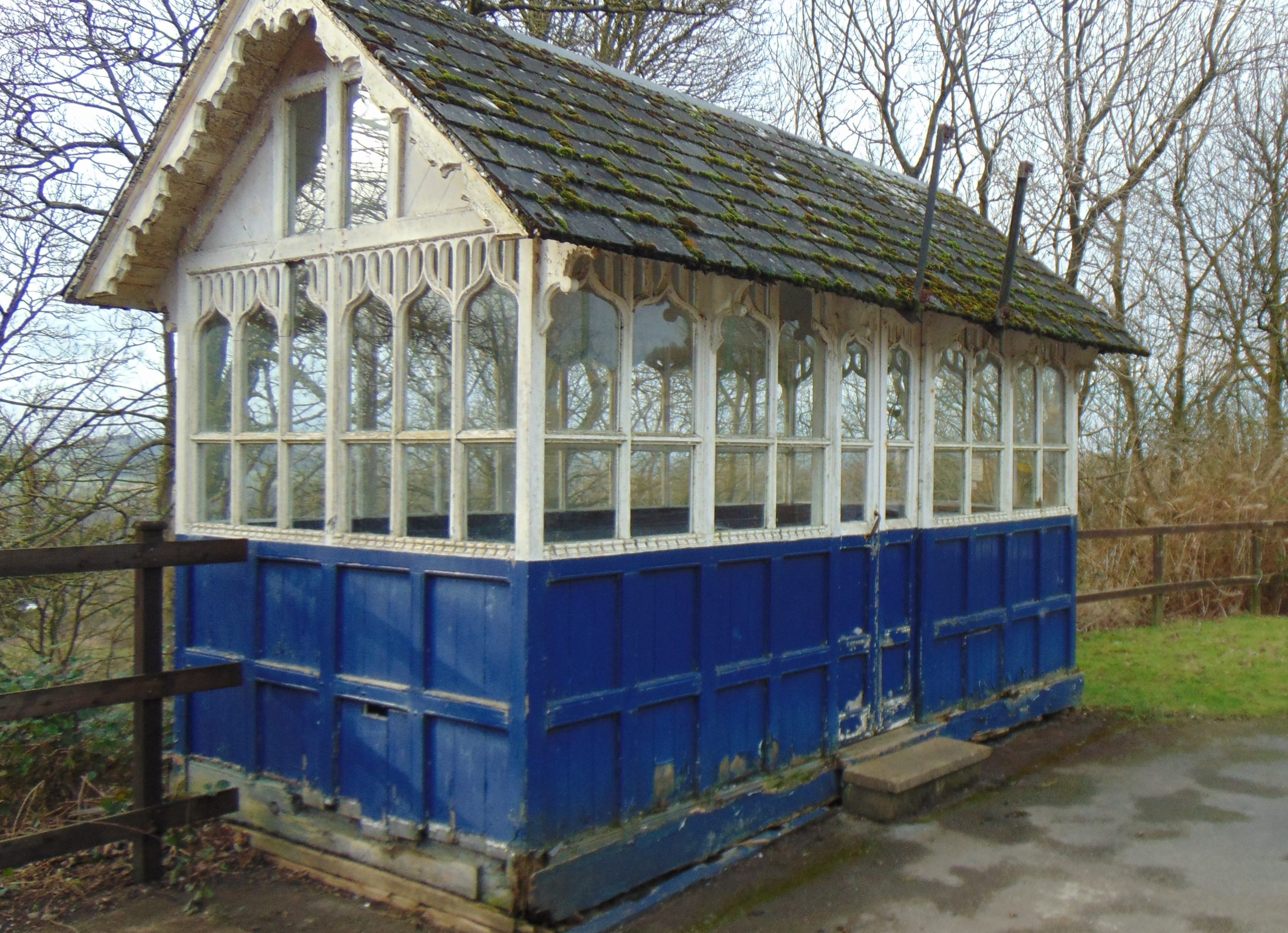 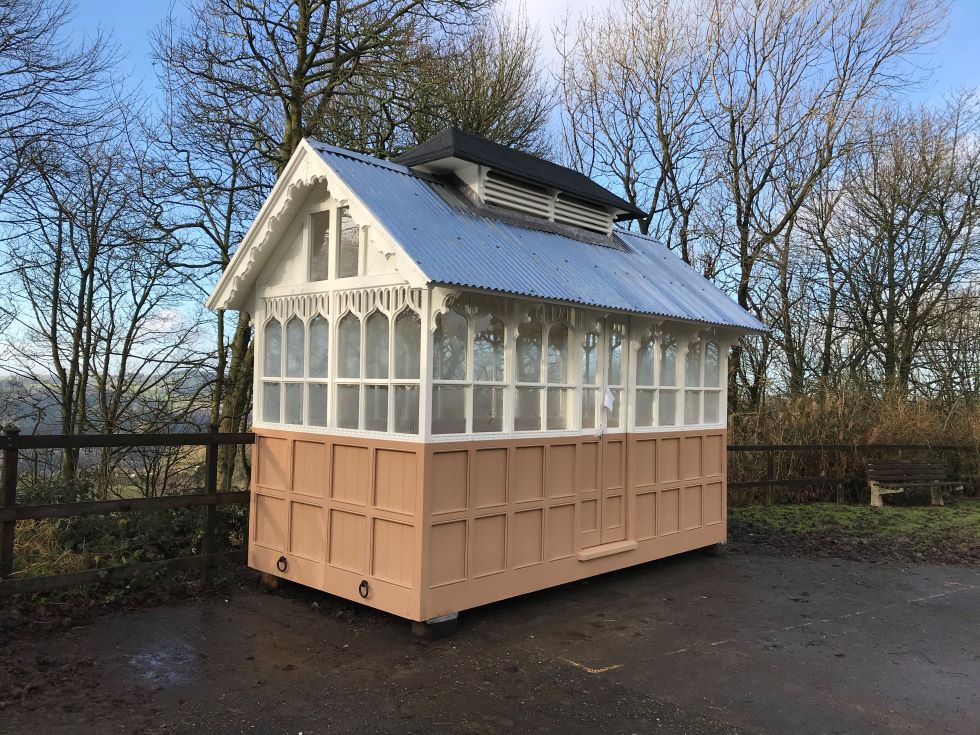 At the beginning of 2020 the Museum started a project to restore and interpret a rare and early example of a Cabmen’s Shelter. We are very pleased to report that the restoration of the main structure is now complete and that the shelter was returned to the Museum site a couple of weeks ago.

The first cabmen’s shelters appeared in Britain in 1873, and ours from 1877 was the first in Bradford. Cabmen’s Shelters provided a place for the drivers of hackney carriages and hansom cabs to take refreshments, warm themselves, and shelter from the elements while they waited for ‘fares’. Water for the horses was also available at the shelters; this could be warmed during the winter months.

The shelter started its life in 1877 outside the old Christ Church, at the top of Darley Street in Bradford. The Church was demolished in 1879 and the shelter was moved to the entrance of Exchange Railway Station, itself demolished in 1973. The shelter was donated to the Museum by the Bradford Taxi Association, who were responsible for it, early in 1973, to save it from likely demolition.

The shelter was designed gratis by local architects T.H. & F. Healey and built by Messrs. Johnson and Smith. It cost £194 which was paid for by funds raised by the ‘Ladies’ Committee’. 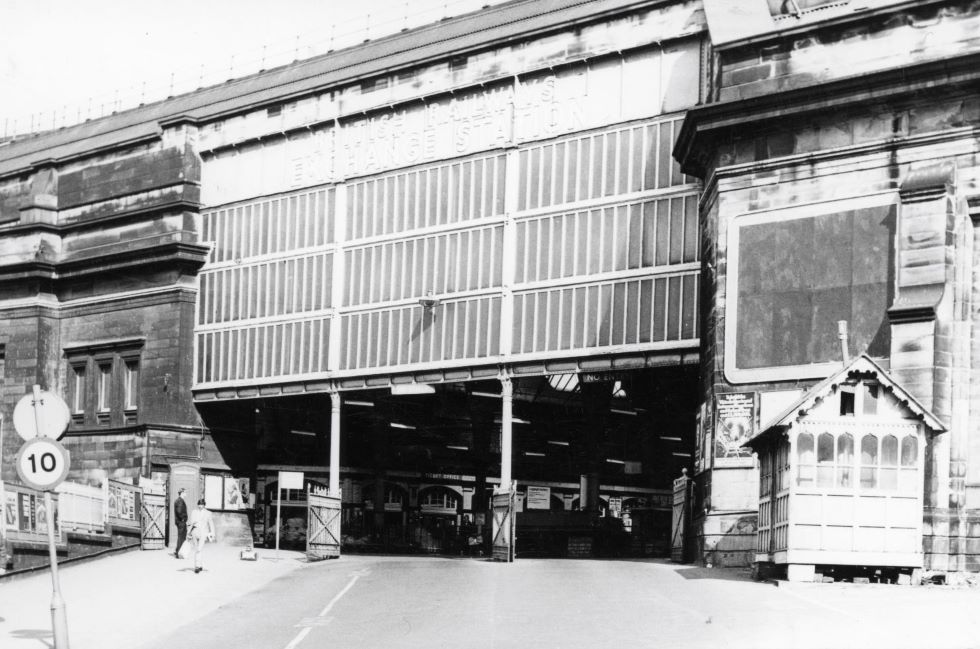 The Building News of 1878 reported that “The structure is of pitch-pine, stained and varnished, the roof laid with felt upon the boarding, and then covered with sheet zinc. The stove, which is very compact, contains oven, hot-plate, and boiler for supplying warm water for the horses – an arrangement much appreciated by the cabmen.” In addition, the architects’ drawings show the interior of the shelter fitted with lockers under the bench seating, a table with coal locker beneath, and a lavatory, clarified by The Bradford Observer of 26th November 1877 as a ‘wash basin’.

The aim of the restoration was to take the shelter back as near as possible to its original form when first in use in 1877, while retaining as much as possible of the original structure which remained in a sound and conservable condition. The condition of the shelter had deteriorated to a point where it was becoming structurally unsafe and unsuitable for visitors to enter. It was important that we make it again accessible to our visitors while enabling them to learn about its history.

Most of the exterior of the shelter was still original, apart from the roof which had already lost the zinc before it arrived at the Museum in the early 1970s and had been covered with tiles at some point since then. There was no visible evidence of the clerestory roof, as seen in the drawings. A very similar surviving shelter that has been restored at Embsay Station on the Embsay and Bolton Abbey Steam Railway and is Grade II listed, was also used as a point of reference for both the corrugated zinc roof and the clerestory.

The interior of the shelter was fitted with open bench seating which must have replaced the original seating during its life in Bradford. It was used by Bradford taxi drivers for over 90 years so some alterations and adaptations to suit the needs of the times were undoubtably made over this time. The flue pipe from the stove, still in place when the shelter came to Crich, had subsequently and for reasons unknown been removed.

No records of the original colour of the shelter have been found except the reference in The Building News of 1878 which reported that it was ‘stained and varnished’. To confirm this, our Conservation Workshop’s Coach Painting Technician carefully stripped back the layers of paint on samples of original wood taken from the lower half of the shelter. Beneath the numerous layers of dark and pale blue a base layer of tan paint was revealed, with no evidence of either stain or varnish beneath it. The restorers found only evidence of white paint on the upper half. It is considered that it was painted with various shades of blue during its time outside Exchange Station Bradford, as this was the colour used on other parts of the station, possibly in line with the occupying railway companies (L&YR/GNR Joint, L&NER, British Railways, North Eastern Region). There are some photographs of it painted in a pale blue colour whilst outside the station. It looks from the photographs we have of it at Exchange Station that the darker blue paint seen in the pre-restoration photograph was applied after the shelter arrived at the Museum.

Although cared for by the Tramway Museum Society, the shelter was never owned or used by Bradford Corporation Tramways as far as we are aware, so it would not have been painted in their livery. The shelter predates the tramway in any case.

It was very difficult to match the shade of the tan paint exactly, as the samples were affected by age-related degradation. We concluded that the original colour was likely to have been created from a mixture of white lead paint and iron oxide which could not be accurately replicated using modern non-toxic surface finishes. The colour eventually chosen, which was considered to be the most accurate representation of the base layer of tan paint, was GWR Light Stone. 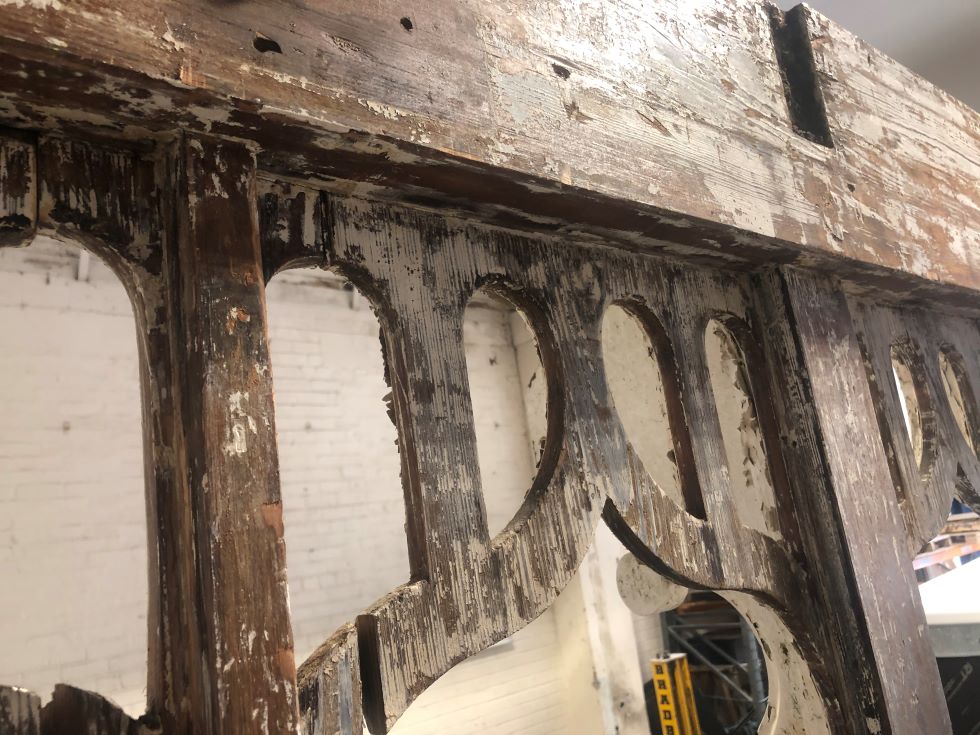 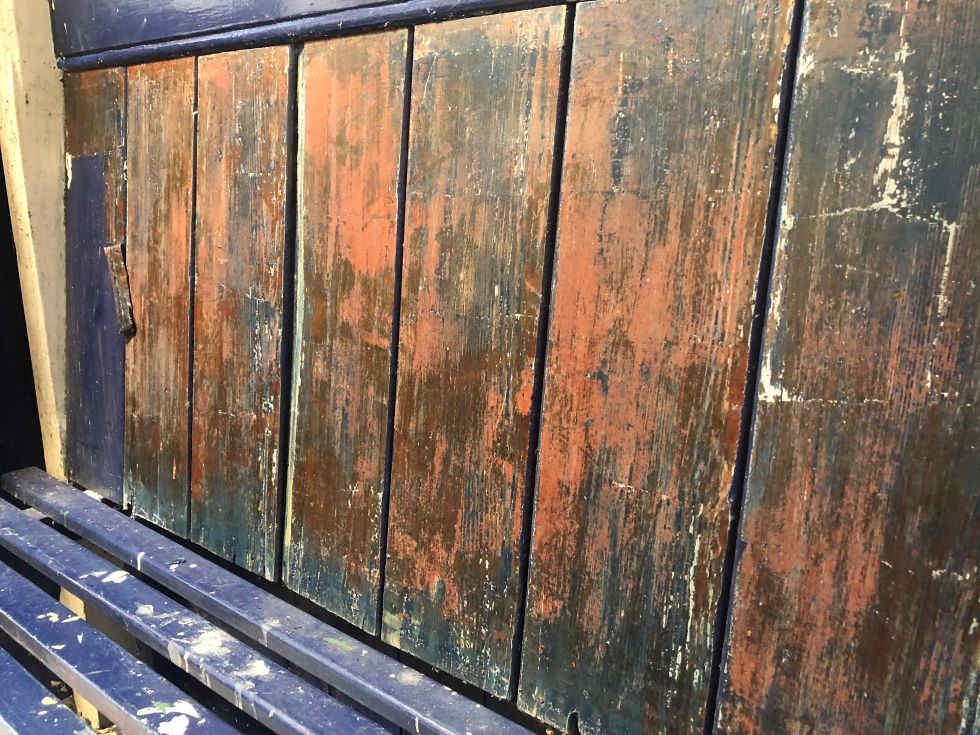 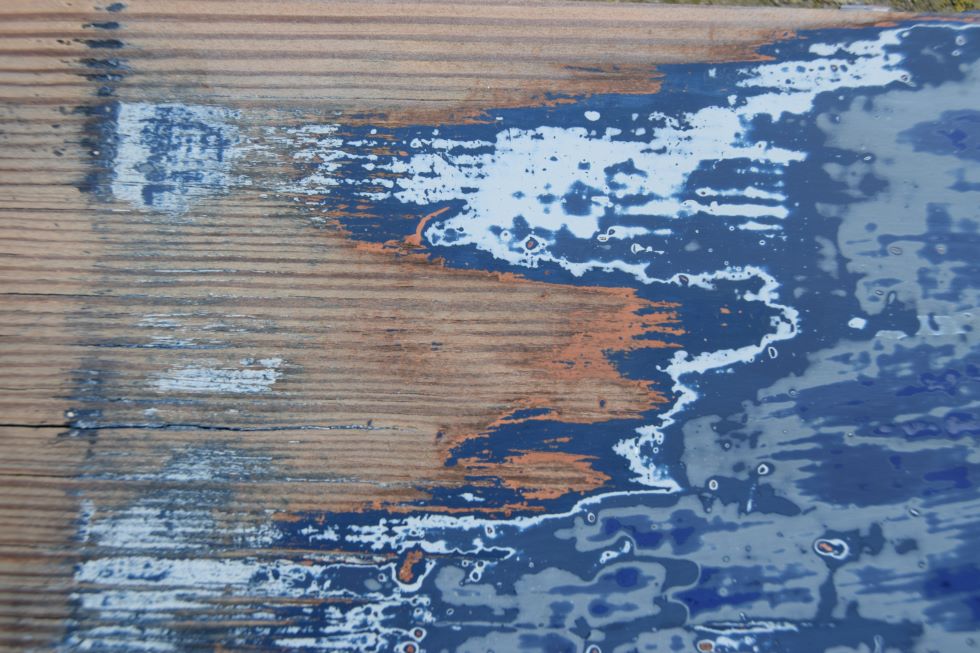 The start of the restoration was delayed until July 2020, when Dorothea Restorations were able to remove the shelter from the Museum and take it to their workshop near Bristol. The roof, glass and gables were removed and the rest of the shelter braced with support bars before it was lifted onto a lorry for transportation. 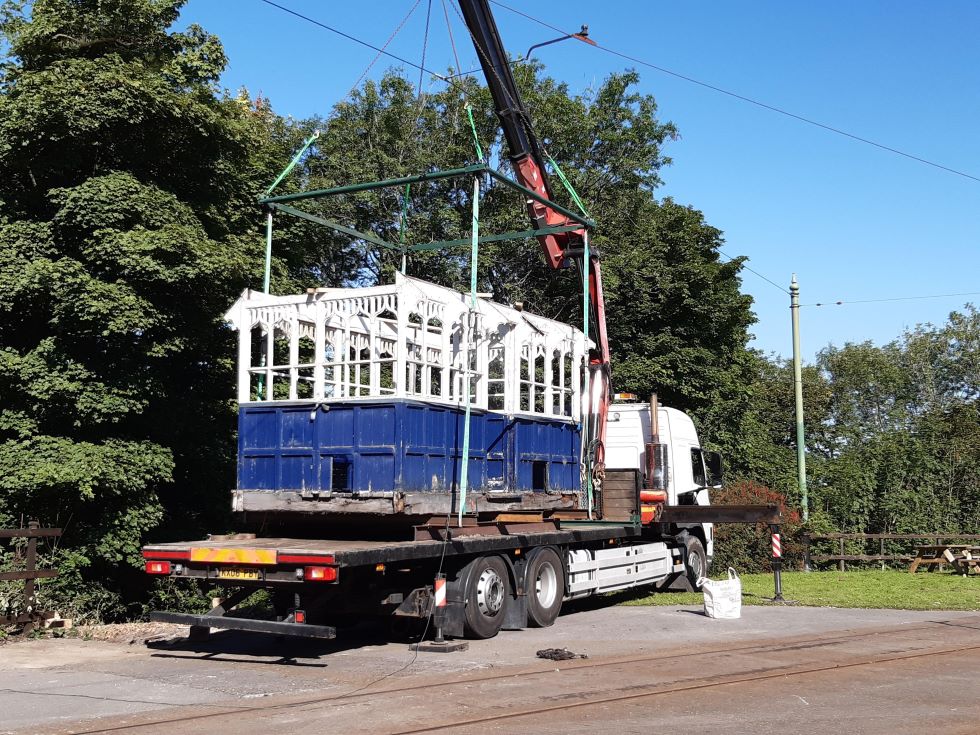 Above: The Shelter is lifted ready for transportation

Once in their workshop, the paint was stripped back to the bare timber. All the timber that was in suitable condition to be conserved was re-used in the same position. Most of the upper half of the shelter was in good enough condition to be conserved and re-used, but large parts of the lower half were decaying from moisture ingress and needed to be replaced. The original structure was constructed from pitch pine, but as this is no longer commercially available, Douglas Fir was chosen as the closest alternative for outdoor use. The backs of the interior seats were retained as these are thought to be original.

The shelter was originally set on two iron axles and four cast steel wheels. One of the axles and wheel sets, plus one wheel bearing, were still in situ and in suitable condition to be refurbished for re-use. The remaining three bearings had to be re-manufactured along with the other axle and wheel set. What the team at Dorothea originally thought were tie bars turned out to look more like draw bars, the protruding parts of which had been lost through either removal or corrosion. The draw bars were also in a poor condition. Replacements were manufactured with a towing loop where each bar protruded through the wood, like those shown in the detail of the architects’ drawings. 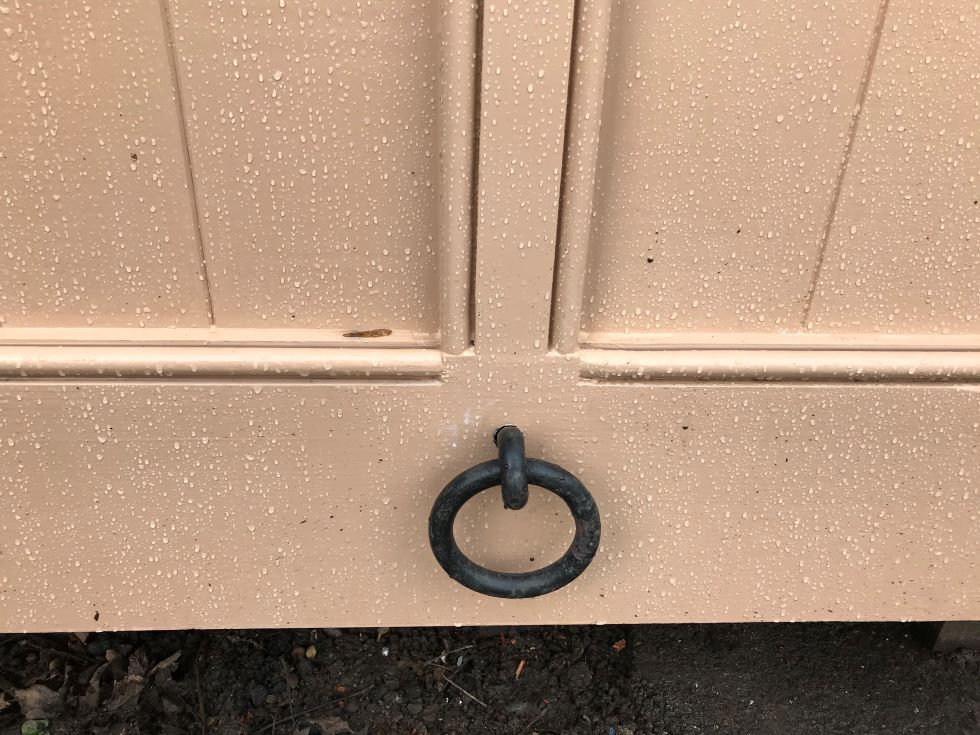 Dorothea Restorations also designed and built a new clerestory as close as possible to the architects’ drawings and the shelter at Embsay Station. This allows ventilation through fixed louvres on either side of the clerestory, with two hatches on the roof beneath which can be opened and closed independently using a pulley system. 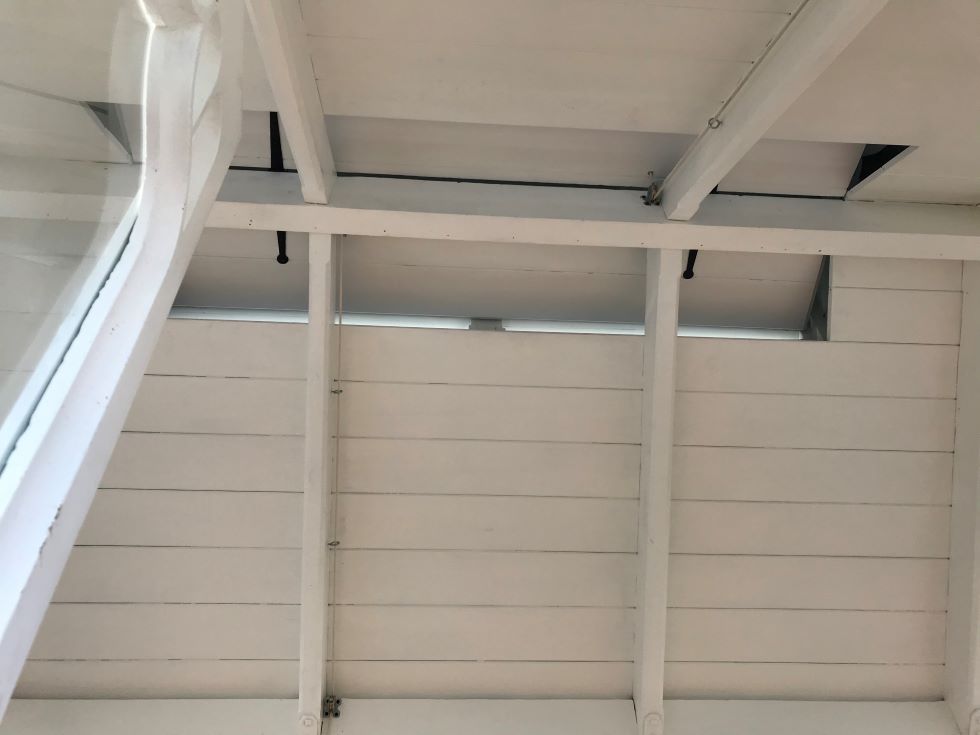 At the point of writing this article, the shelter, having arrived back at the Museum site in mid-December 2020, is complete apart from its wheels. A hardstanding is being installed and the shelter will be placed on this, on its wheels, early in the New Year. The interior will be fitted with bench seating, a table with coal locker beneath, a stove and wash basin, which have yet to be sourced. A range of interpretation, sympathetic to the restoration, will be installed. In addition, V21 Artspace will complete a further 3D scan of the fully restored shelter which will be turned into an enhanced virtual tour. As the shelter is not wheelchair accessible, this will allow people who cannot get inside or people who cannot visit the Museum to see the inside of the shelter. 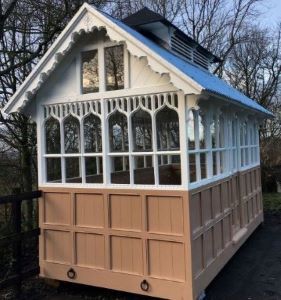 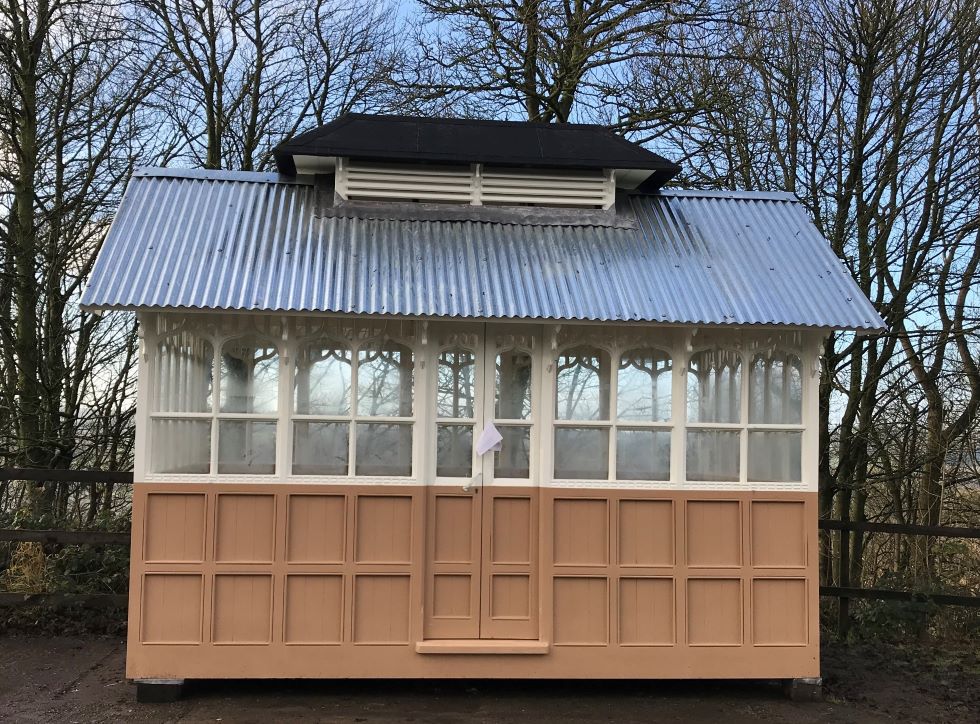 Thanks go to the project funders who have made the restoration possible it has been supported by Arts Council England through National Lottery Project Grants, The Association for Industrial Archaeology and The Pilgrim Trust.