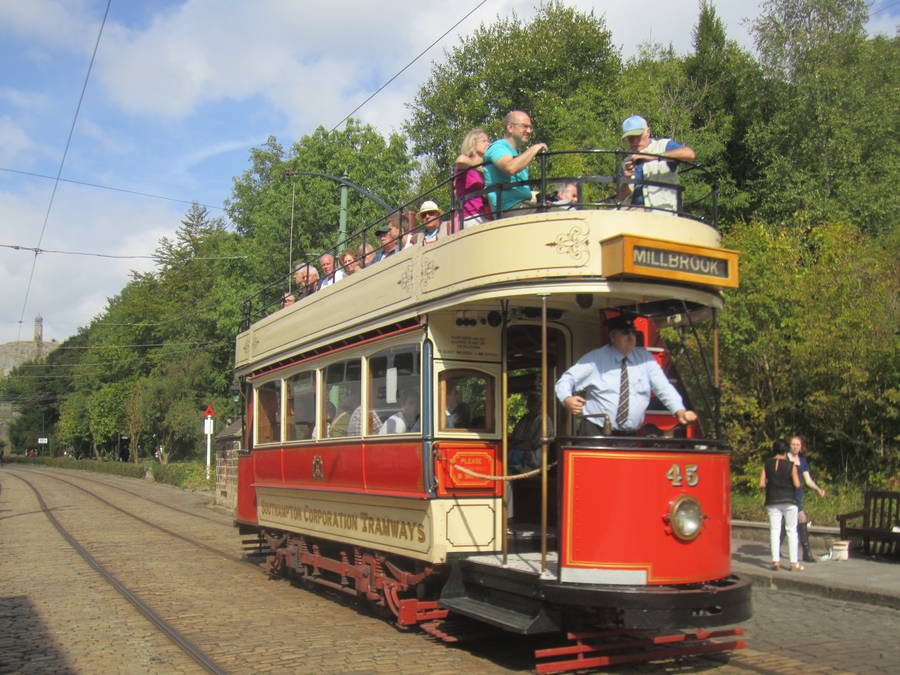 But for Southampton 45, the tramway museum at Crich might well never have come into being, for this was the tramcar that single-handedly launched the tramway preservation movement in Britain. Back in 1948 Britain’s first generation tramways were in a state of near terminal decline. Many systems had already closed before the war and most of the remainder seemed doomed to follow them into oblivion during the coming decade. Sister car 43 in St Denys scrap yard, Southampton; an all too common fate for most of Britain’s remaining tramcars after the war. H.B. Priestley, 11/6/1949

Faced with this prospect, a group of tramway enthusiasts had already begun to organise tours of the systems that remained in operation, partly for nostalgic reasons, and partly to record this fast-disappearing mode of transport for posterity. Thanks to their enthusiasm and foresight many of the photographs taken during these tours are now to be found in the extensive photographic archives at Crich.

One such tour – the final tour of the Southampton system before its closure to be undertaken by the Light Railway Transport League – took place in August 1948. By a quirk of fate the original car used for the early part of the tour – top-covered car number 37 – became de-trolleyed and a replacement open-topped tram (number 44) was used for the remainder of the tour. Sister tram 44, the one that was originally selected for preservation on an LRTA special tour in August 1949, pictured in Prospect Place. D.W.K. Jones, date unknown.

During that tour members of the League’s Museum Committee took the momentous – and bold – decision to purchase a tram for the princely sum of £10 (equivalent to £263 in 2012) even though there was at that time no dedicated museum in which to store it. In the end the tramway manager persuaded them that sister tramcar number 45 would be a better proposition as it had recently been re-wheeled and overhauled, since when it had only covered 500 miles.

The car they purchased was originally built in 1903 by Hurst Nelson of Motherwell as an open-topped vehicle with a three window lower saloon. This particular class of twelve tramcars shared a number of distinctive features that enabled them to negotiate the extremely low clearance beneath Southampton’s medieval Bargate Arch and which account for its slightly squat appearance.

They include a slightly lower profile and the provision of back-to-back ‘knifeboard’ seating on the upper deck, which was intended to make maximum use of the very limited clearance under the arch. Elsewhere such seating arrangements – which had been quite commonplace during the horse tram era – had long since been abandoned.

Even with these features, it was still necessary to warn passengers by means of a notice on the upper deck to remain seated while the car was passing under Bargate and not to touch the overhead wire. Because this design provided insufficient support for the upper deck, however, Southampton Corporation gradually rebuilt the twelve Hurst Nelson cars to a four window configuration.  The exact date of this conversion is not entirely clear from the original Southampton tramway minutes that have survived.  These suggest that some alterations were carried out in 1914, though a major rebuilding of 45 did not appear to have taken place until 1917.

The restructuring involved an alteration to the platforms, the fitting of canopies, top cover and reversed stairs.  At some point the tramcar must have been converted from three-window to four-window configuration but there is no photographic or documentary evidence to confirm exactly when this change – 1914 or 1917 – took place. A further alteration in 1929 involved the removal of the top cover and a reversion to open top guise in order for the tramcar to be capable of passing under the Bargate; and it is in this guise that the tram now appears. Buying a tramcar for posterity following its withdrawal from service was the easy part, however. A much bigger challenge was finding somewhere to accommodate it, which necessitated a number of moves until a permanent home could be found for it.

Accordingly, the tramcar was stored for several years in Leeds and Blackpool until a temporary home was provided for it in 1958 at what was then the Montagu Motor Museum at Beaulieu, in Hampshire, where it was put on display together with another preserved tramcar (Newcastle 102).

Fortunately it was not too long before a more permanent home was acquired at what was to become the National Tramway Museum in Crich, which enabled it to be moved up north on 29 October 1960 after paying a final nostalgic visit to its native Southampton on the previous day.

Since arriving at Crich, Southampton 45 has been in regular demand, particularly on sunny days, as a popular open-topped tram. It was also the first tram to reach Glory Mine after the track was extended there in 1978. After many years as one of the mainstays of the operational fleet, the tramcar was in need of an overhaul by the end of the 2012 season.  With an important celebration looming in a couple of years’ time, however, it was decided to withdraw it temporarily from service so that it would be available to participate in the 50th anniversary of the start of electric tramcar operations at Crich.

Following this important event, which was celebrated in style in September 2014, number 45 was again withdrawn from operational service until time and space in the workshop can be found for a by now much-needed major overhaul.

Interestingly, 45 is not the only Southampton tramcar to have survived into preservation.  Indeed, a small band of committed enthusiasts have for many years been working on the restoration of a further two  Southampton tramcars with a view to putting them on display in the city in which they operated.  They have also been involved in the restoration of a third tramcar though this is no longer in the group’s collection.

Built as 3-window open-topper.
Rebuilt probably in 1917 as 4-window front-exit car with reversed stairs installed. Saloon height raised, flat top-cover fitted.
It reverted to open-top guise in 1929 in order to pass through the Bargate. The gaps in the dashes for the front exit under the stairs, which were originally fitted with ornate wrought-iron gates, were fitted with solid metal sheets instead.

Following withdrawal it was given a new truck and repainted. It then spent time in storage in Leeds (from January 1949) and Blackpool (from June 1949) before being put on open-air display in 1958 at the Montagu Motor Museum in Beaulieu. The tramcar was moved to Crich on 29 October 1960.

Re-trucked and repainted free of charge in the Corporation workshops in preparation for preservation.