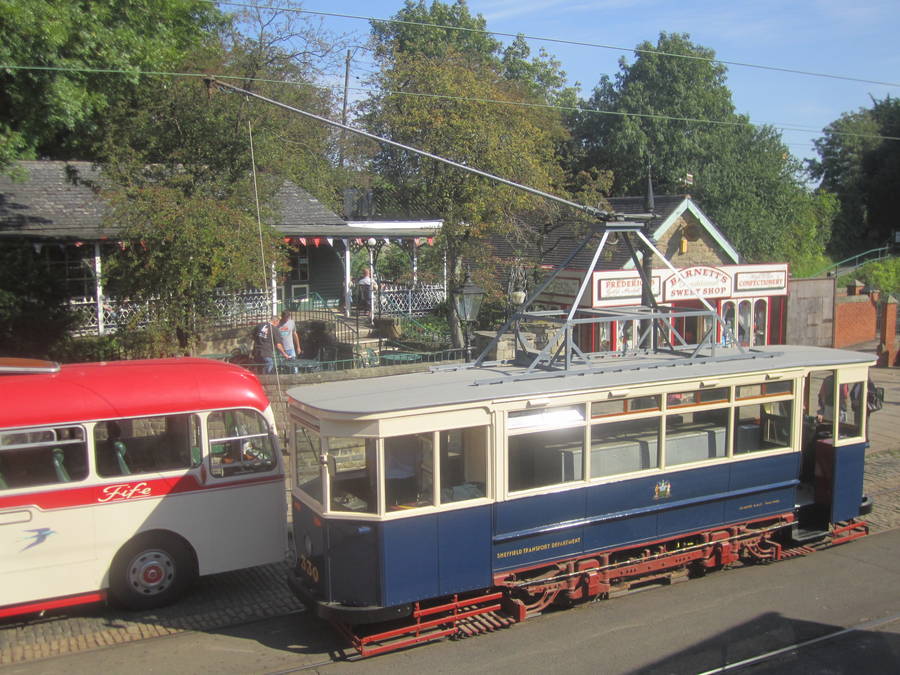 During the early years of the electric traction era, it was normally necessary for tramway undertakings to purchase directly from the manufacturers any vehicles they required – whether passenger trams or works cars (as in the case of Cardiff 131). As time went by, however, it was common for operators to fill any gaps in their works fleet by converting redundant passenger trams, a practice that is illustrated by Sheffield 330. 330 began life as an open-balconied double-deck passenger tram that was built in 1919 by English Electric to the somewhat narrower 4-foot gauge for Bradford Corporation. It operated there in this guise for over twenty years as car 251 before being purchased by Sheffield Corporation in 1943 as part of a batch of 24 second-hand trams from Newcastle (14) and Bradford (10) in order to replace cars that had been destroyed or damaged in the blitz, at a time when new tramcars were impossible to come by. Before it could operate in Sheffield it had to be regauged, but its body-work was also fully enclosed at this time and, as well as being painted in the wartime grey livery, it was renumbered as 330. Even with these modifications, however, its slightly angular appearance always set it apart from the rest of the Sheffield fleet, though it was most likely to be seen working additional services during peak period rush hours.

Eventually, the war-time restrictions that had prompted the urgent quest for second-hand tramcars were relaxed and, as the newly-built Roberts streamlined cars began to enter service in 1950, the rest of its class became redundant and were scrapped. By this stage, however, most of Sheffield’s fleet of works and departmental trams had themselves become life-expired and so 330 narrowly avoided the same fate by undergoing a second conversion, this time becoming a type of water car known as a carborundum car or, more colloquially, a ‘scrubber’. This involved the removal of its top deck and stairs and also further modification to the remaining single deck body by inserting large water tanks inside the saloon and extending the vestibules further round the platform, which had the advantage of reducing the width of the entrance and affording the crew with at least some protection from draughts on chilly nights. An additional concession towards the comfort of the crew – the addition of platform doors – was considered but not, in the end, adopted though, somewhat incongruously, the body was equipped with a pair of luxury coach style direction indicators.

A steel gantry tower was attached to the roof to enable normal trolleys, of the kind fitted to double-deck tramcars, to be deployed in order to collect the current. Finally, the heavily modified tram body was then united with the presumably strengthened truck belonging to one of the retiring water cars and carborundum blocks were fitted to the track brakes.

The newly converted works car was then painted in the older Sheffield livery of dark blue and cream with ornate numerals and, in this guise, 330 embarked on a new role as a rail grinder and was also used to flush grit and sediment from track grooves in dry weather, in order to reduce friction. It continued to perform these vital functions to the end of the Sheffield system, whereupon it found itself lying in the Tinsley depot awaiting its fate.

At this point, fortune once again smiled on this born survivor when Tho. Ward, who would have been responsible for scrapping it, gave a group of enthusiasts the option of buying this by-now only remaining example of a once ubiquitous type of car that had played a key role in maintaining the fabric of most of our large tramway systems. The car was transported to Crich in December 1960 and, having been extensively overhauled and maintained in full working order, it has continued to perform occasionally as a ‘maid-of-all-work’ including point and track cleaning duties.  It has also served in other capacities over the years, including the occasional appearance at Santa special events at a time when these formed a regular part of the Crich tramway programme of events…

More recently, the renovation and inauguration of a second water car with rail scrubbing equipment (Cardiff 131) brought with it the threat of final redundancy for 330.  While 131 was performing its vital services away from home in Blackpool in 2012, however, Sheffield 330 was recalled from retirement yet again to help prepare the trackwork at Town End for the new season.  And it made several further appearances in 2014. 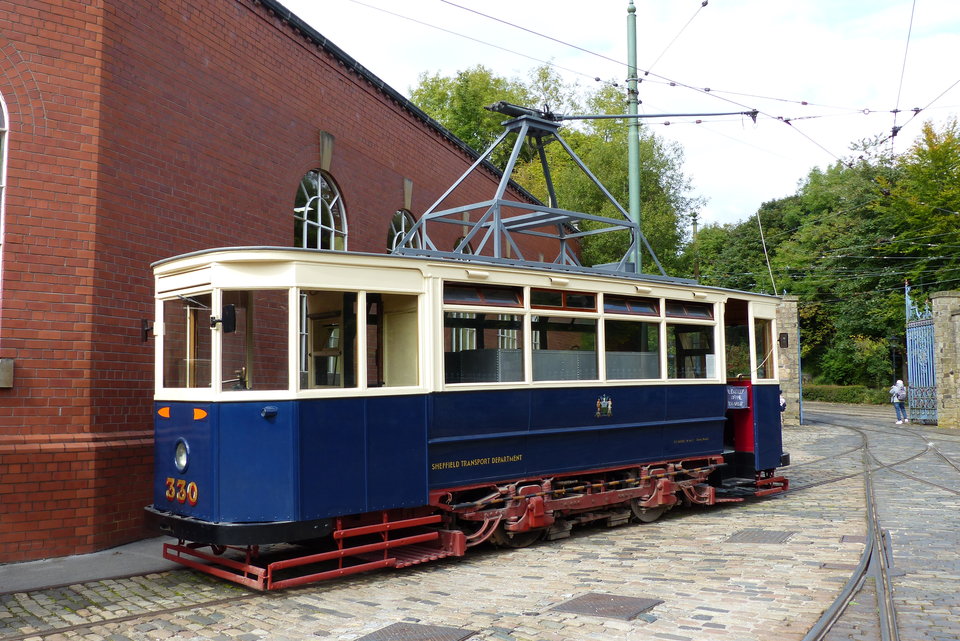 It remains to be seen whether these were just temporary reprieves or simply the latest in a long-running series of reprises for a tram that doesn’t appear to know the meaning of retirement.

Regauged to standard gauge, open balconies enclosed, painted in wartime grey and renumbered as 330 on acquisition by Sheffield Corporation in 1943.
1951 conversion to works vehicle, by removal of top deck and stairs; fitting of water tanks in lower deck saloon; extension of vestibules further round platform; fitting of gantry tower to roof to support trolleys; replacement truck; fitting of carborundum blocks to track brakes; addition of motor coach traffic indicators.

Converted to works car and survived till closure of the Sheffield system in 1960.

Extensive overhaul and restoration to operational condition over a number of years while at Crich.

Current status
Restored and maintained in operational condition. Commissioned for occasional use during the current season.
Date started operating at Crich
1986. Has operated in 10 seasons, most recently in 2014.
Total mileage covered at Crich
193
Current location
Depots