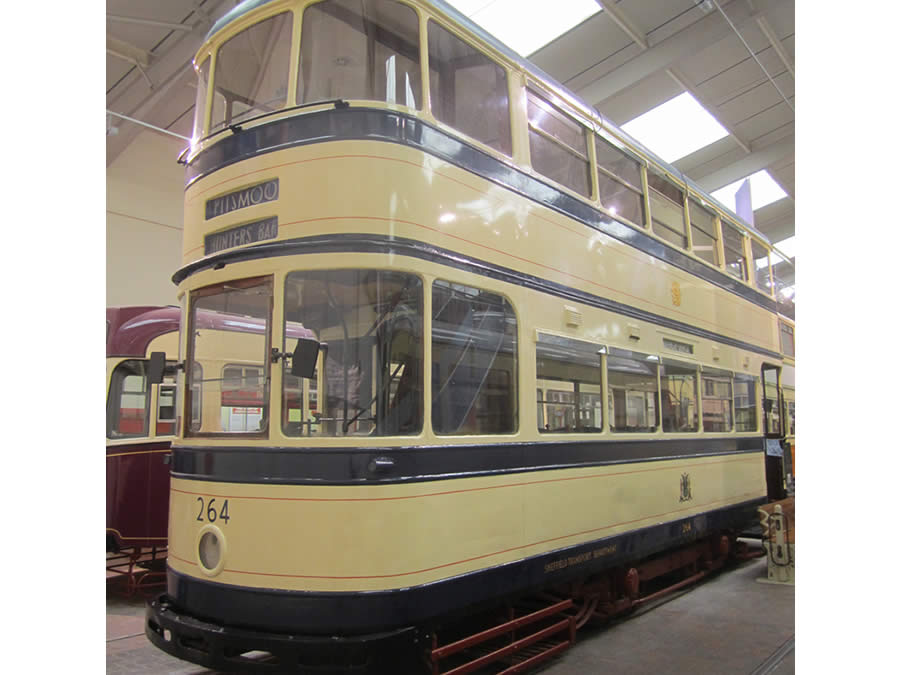 Although only three years younger than its stable-mate, number 189, Sheffield 264’s altogether sleeker and more modern appearance shows the benefit of Sheffield Transport Department’s continuing quest to keep pace with the latest advances in tramcar development that were being developed in other comparable undertakings. (Edinburgh 35 provides a contemporary example). The result was a batch of ‘improved standard’ tramcars that were often referred to as ‘domed roof’ cars, since this was one of the most obvious visual features that set them apart from their ‘flat-roofed’ predecessors. 264’s semi-streamlined design with its domed roof contrasts with the more traditional flat-roofed design of its predecessors such as 189. Photo: Jim Dignan.

The 67 new cars that were built to this design retained the same dimensions and technical specifications as their forebears, but their pleasingly clean styling with ‘semi-streamlined’ upper deck ends and new cream and blue livery clearly set them apart even though the changes were largely cosmetic. Although they still lacked platform doors, the trams did feature individually opening windows augmented, on the lower deck, by air deflecting ventilators. A further fourteen cars were also built by the transport department’s Queens Road works to a slightly more utilitarian design during the war to replace vehicles that were destroyed by the blitz. Number 264 was perhaps fortunate in avoiding a similar fate as it also received minor bomb damage but, apart from needing a replacement window, was able to continue in service until the end of the war and beyond.

Likewise Sheffield tramways as a whole were fortunate – given the city’s strategic importance – not to have suffered the total destruction that other British cities such as Coventry and Bristol experienced during wartime bombing raids. Number 264 initially serviced the Crookes to Woodseats route and after the war was used on the Handsworth route. It is the only Sheffield tram at Crich to have run a normal service on the final day of operation on 8 October 1960. It owes its survival to the fact that it had previously been purchased privately by an enthusiast and found itself in Queen’s Road depot in the company of a number of other trams that had been selected for preservation at Crich rather than the Tinsley depot, which was the final resting place for trams that were destined to be scrapped. Like a stowaway, it was thus transported to Crich in December 1960, thereby narrowly avoiding the fate that awaited most of the remaining Sheffield tramcars following the closure of the Sheffield system. Its lucky streak continued when, its original purchaser having disappeared, it was effectively adopted by a handful of supporters, who not only paid for its upkeep but also lavished an enormous amount of work during its early years at Crich, protecting it from the elements, restoring its paintwork and, ultimately, getting it back in running order in the days before the museum had the luxury of a workshop and associated facilities.

The lengthy rejuvenation process was eventually completed by August 1970, just in time for that year’s Transport Extravaganza, and the tram continued to form part of the museum’s operational fleet for the next ten years until concerns about the state of its bodywork prompted a withdrawal from passenger service. It has continued to feature as a popular static exhibit, however, and currently resides in the main Exhibition hall. 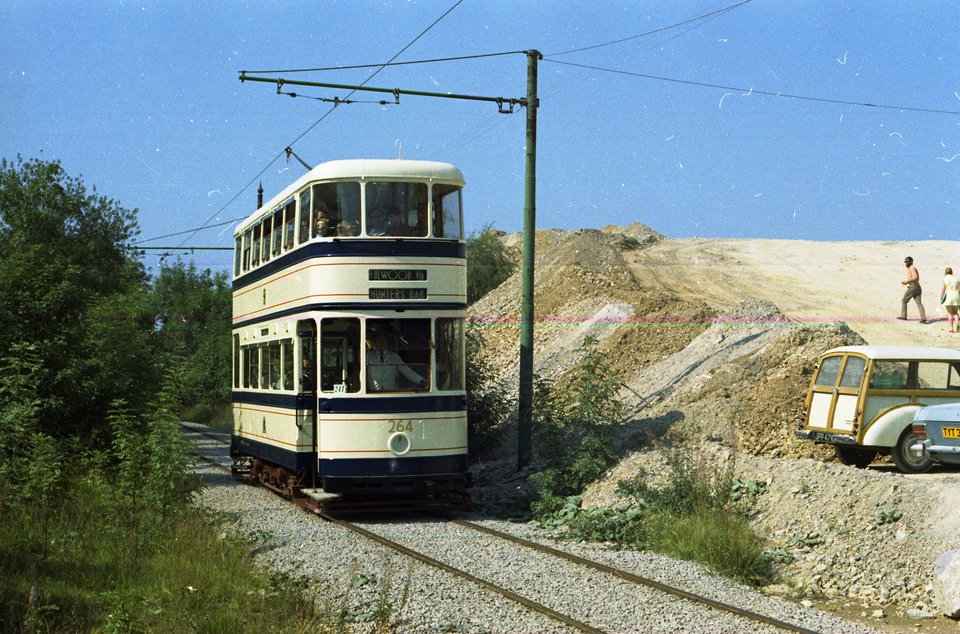 Because the tramcar is one of the few in the collection to retain its original bodywork, interior furnishings and equipment it gives a relatively good idea of the typical state of a working tramcar at the time of its withdrawal from service. This, in addition to the fragility of its bodywork, has prompted the decision to conserve the tramcar as a static exhibit rather than undertaking a full restoration to operating condition.

In view of 264’s singular good fortune in surviving – against the odds – into preservation, it is all the more remarkable that it is not the only Sheffield tramcar bearing this number to have done so. Its numerical ‘double’ is a much older tramcar that entered service thirty years earlier in 1907, only to be renumbered as 342 when the current 246 and its contemporaries were about to join the fleet. After surviving in service until 1956 it was initially exhibited at the Clapham Transport Museum but eventually ended up at the Beamish open-air museum in 1973, where it was eventually restored to its 1920’s open balconied condition, whereupon it reverted to its original number. The ‘other’ Sheffield 264, photographed at Beamish Living Museum of the North on 14th May 2018. Photo: Jim Dignan.

Continued in normal operation until the final day of service on 8 October 1960.

Purchased privately and transported to Crich on 17th December 1960.

Restored over an extended period of time by a small band of volunteers without access to workshop facilities and resources. A detailed account of the restoration process appeared in the Society Journal (no. 213) for January 2011.