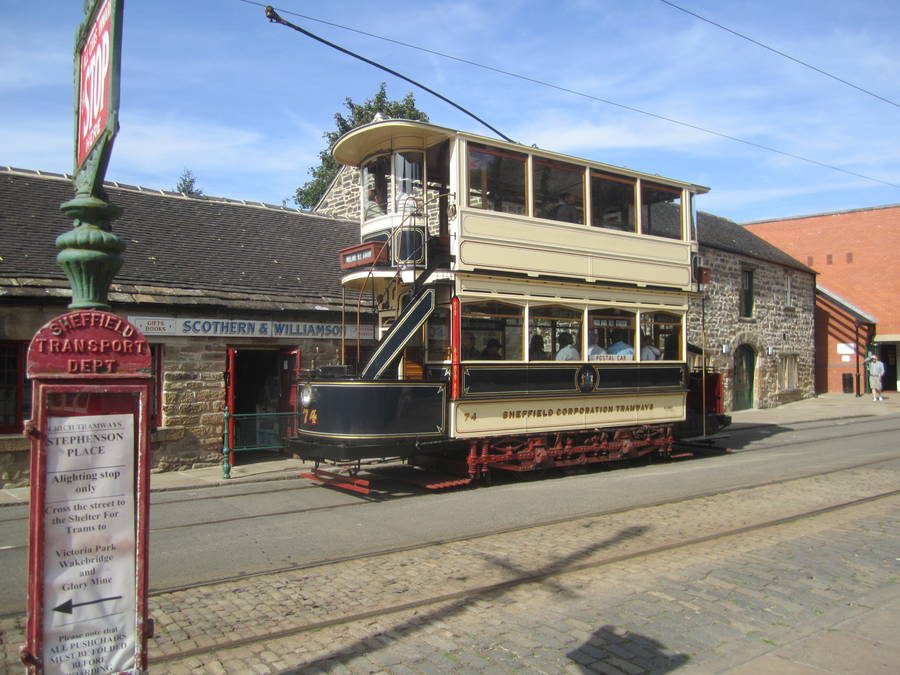 Appearances can often be deceptive and the field of tramcar preservation is no exception, Sheffield 74 being a case in point. Thanks to the skill and ingenuity of the workshop team at Crich, this image of Edwardian elegance looks for all the world as if it has miraculously survived intact and unblemished for over a century; but the truth is far more complicated, remarkable and, for some, perhaps, even a little controversial.

Sheffield 74 was originally built as an open-topped tram by the Electric Railway and Carriage Company based in Preston in 1900. The very first electric tramcars had only been delivered to Sheffield the previous year and by 1904 the Corporation’s Nether Edge workshops were already producing their own tramcars to a broadly similar open-topped design. Similar looking cars also operated in Bristol, Hull and Glasgow but all these early designs pre-dated by a couple of years the era of standard ‘off-the-peg’ vehicles that were later offered by established tramcar manufacturers such as Brush and Dick, Kerr. The only modification the tram received while in Sheffield was the addition of a short top cover in 1909, which provided passengers with protection from the elements (thereby boosting revenue in inclement weather) while leaving drivers exposed. Instead of modernising the car still further, which would have required much more extensive rebuilding, the by now rather outdated-looking tramcar was one of a batch sold in 1922 to Gateshead Corporation, where it was renumbered 33.  Although vestibules were added to the lower decks, the top deck balconies remained open to the elements for the remainder of its life in service. The car continued in service at Gateshead until 1951 when the lower saloon was sold off and converted into a suburban garden shed. There it remained for the next forty years until members of the Tramway Museum Society were alerted to its existence by colleagues at the Beamish open-air museum.

Fortunately, the Society already had in its possession top-covers (in effect the upper decks) from two similar Sheffield-made trams (numbers 215 and 218) built in 1904. These had been sold in 1929 to an Inspector in the Tramways Department who had them converted into a bungalow in the village of Holmesfield, six miles south of Sheffield. They were offered to the Society after his death in 1968 and, given their rarity, had been stored by the museum after their removal in 1970.

The final pieces in an intricate jigsaw puzzle consisted of a broadly appropriate, though not entirely authentic, truck (a Peckham Cantilever) from an ex-Leeds tramcar plus motors obtained from stock and a huge variety of components that had to be either reconditioned or manufactured from scratch. Contrary to appearances, therefore, Sheffield 74 is in fact a composite vehicle that has not so much been restored as completely reconstructed using major components from at least three other salvaged tramcars.

Purists may disapprove, but the dilemma facing the society was that in order to be able to represent a uniquely significant stage in tramcar design and development – a short-canopied top-covered car, which is a veritable missing link between the earliest open-toppers and their completely enclosed successors – it was necessary to undertake a much more radical project than the conventional restoration of a more-or-less complete tramcar.

It is interesting to note than in other countries that are less well-endowed with tramcar relics preservationists have on occasion even resorted to the complete manufacture of a brand-new replica of a previously extinct tramcar, one example being the re-creation of a 1929 Beijnes tramcar (GETA 76) from Arnhem, which now operates at the Openluchtmuseum on the outskirts of the city. 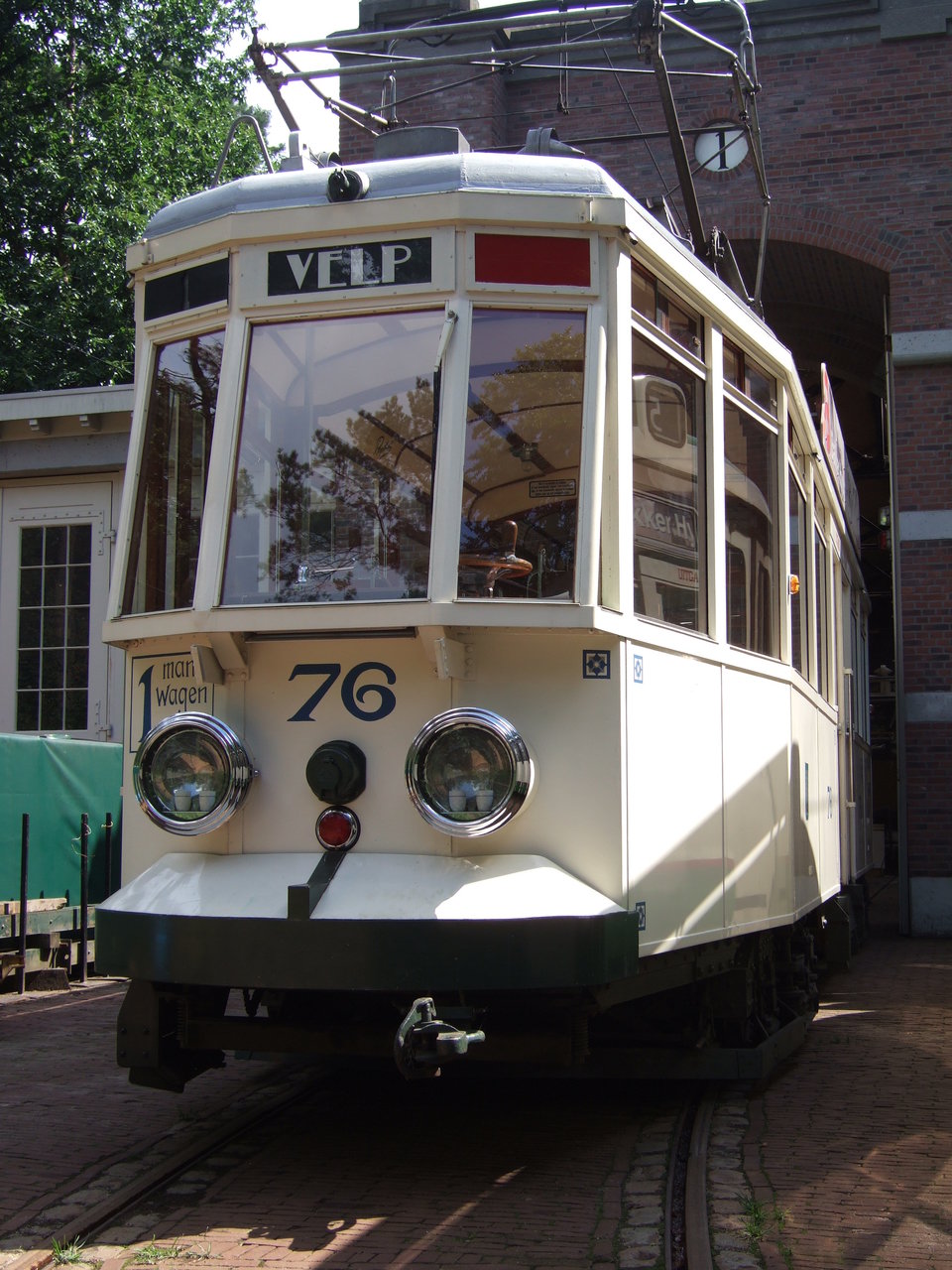 Arnhem’s GETA 76, which operates at the city’s Openluchtsmuseum, is an exact replica of ones that were destroyed by bombardment during the Battle of Arnhem in WWII.  Photo: Jim Dignan, 13/8/2006.

The hugely ambitious and expensive reconstruction of Sheffield 74 was the first to be sponsored by the Tramcar Sponsorship Organisation (with additional funding from the Science Museum) and was undertaken at Crich during the early 1990s. 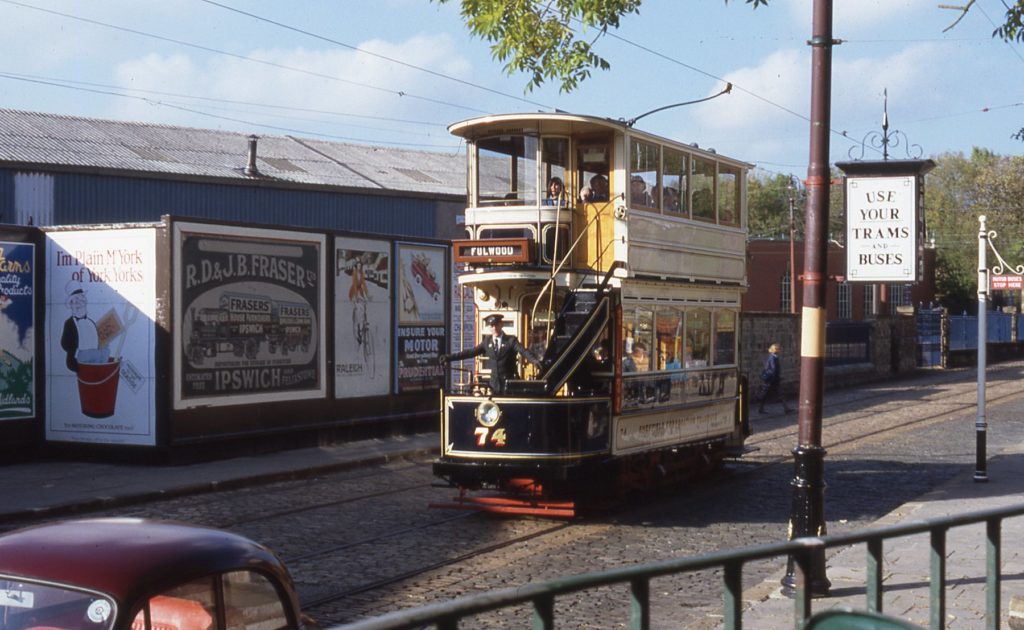 Following its completion, Sheffield 74 has been in regular passenger service ever since May 1995 though it truly comes into its own during the annual themed Edwardian weekend at Crich, which is an event not to be missed by those seeking to experience some of the sights and sounds of a by-gone era.

1909 short top cover added; sold to Gateshead in 1922 after which it was extensively rebuilt and given the number 33, acquiring conventional-looking canopies and top cover. It also ‘inherited’ the trucks and electrical equipment that had previously belonged to the original Gateshead 33, which was scrapped in 1923

Withdrawn from service in Sheffield and sold to Gateshead in 1922; final withdrawal in 1951

Lower deck of 74 sold and converted into a garden shed; acquired by the TMS in 1990.

Current status
Restored to operational condition and commissioned for service during the current season.
Date started operating at Crich
1995. Has operated in 23 seasons, most recently in 2019.
Total mileage covered at Crich
15,226
Current location
Depots