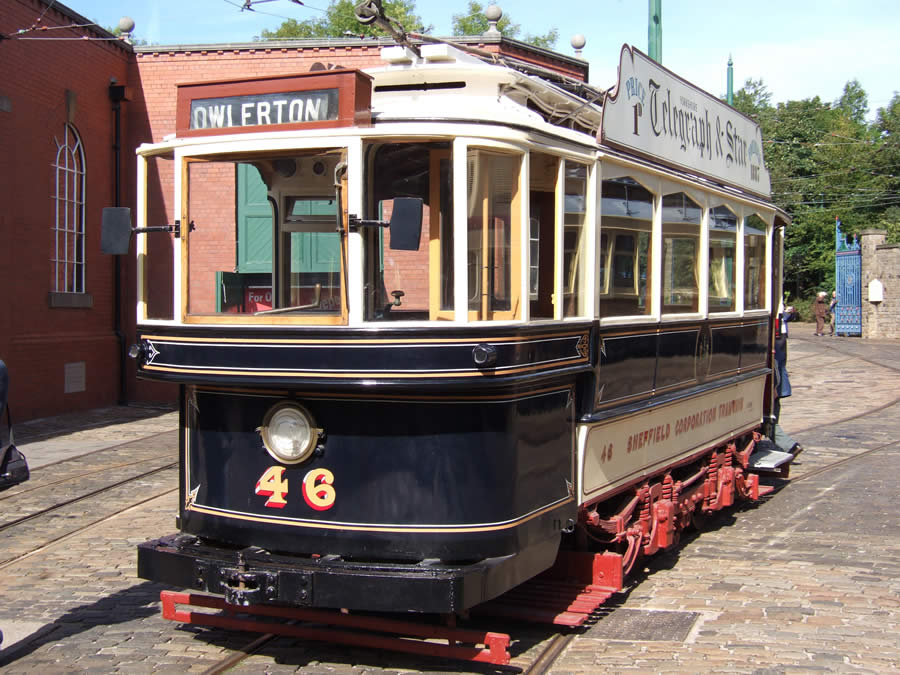 Despite its generally hilly terrain, the bulk of Sheffield’s passenger fleet consisted of double deck cars. Sheffield 46 was a rare exception, dating back to the earliest days of electrification when an order for twelve single deck trams was placed with G F Milnes for use on the particularly steep Walkley route.

The rationale for adopting smaller, single deck tramcars on these routes was largely to minimise the possibility of accidents on the exceptionally steep gradients and sharp curves, though it was also felt that the reduced time needed for loading and unloading might permit a quicker service than that provided by double deck cars. Elsewhere on the system single deck tramcars were required on a small number of other routes where the headroom under low railway bridges did not provide enough clearance for double deck cars.

These single deck tramcars were built as unvestibuled saloons that were originally equipped with 5 Tudor-style windows and a clerestory roof housing 15 small glass roof lights on each side. The 28-seat tramcar shared not only the same “Tudor” window design as contemporary double deck cars but also, more unusually, a similar design of trolley standard. Originally the tramcar was designed without any internal compartments and was fitted with longitudinal seating. The headlamps were carried on the end of each roof canopy at this stage.

By the end of the first World War all tram routes – even the steepest ones – were being worked by double deckers following the reconstruction of the roadway on the remaining low bridge routes in order to facilitate the passage of double-deck cars. This rendered the small fleet of single deck cars redundant and most of these were sold to other operators between 1918 and 1923. Number 46 was one of two remaining single deck cars that were converted into snowploughs in 1921 and it continued to operate in this role until 1950 though it was renumbered on three different occasions during this period. The conversion altered the appearance of the tramcar as the body was shortened by one bay and it received the grey livery that was reserved for works cars. The protruding vestibules that give it such a distinctive appearance were added in 1940. The tram was set aside for preservation and placed in store in the Tinsley depot in 1950. It was restored as vestibuled passenger car 46 in time to take part in the closing ceremonies of October 1960 as the oldest surviving electric tramcar in the fleet. Later that month it was moved to Crich and in the early days it ran in passenger service every year between 1964 and 1973 apart from 1969. Sadly, however, its many years of faithful service and particularly its life as a snowplough/salt car had by this stage taken their toll in the form of corrosion to its running gear and underside.

So in 2005, after many years on display at Crich, it was moved to the museum’s off-site storage facility, where it awaits further restoration. If returned to its original condition as a single deck passenger tram it has the potential to depict a very early stage in the design of British single deck tramcars and is possibly unique in this respect, though a considerable amount of restoration would be required in order to achieve this.

Was converted into works car/snow plough in 1921 which shortened the body by one bay and carried the numbers 97 (1924) and 275 (1926) before being renumbered as 354 in 1937. At this time the car’s livery was grey. A number of original features were replaced including its Peckham cantilever truck and B13 controllers.
Protruding vestibules were added in 1940.

1950 placed in storage in Tinsley deport, where it was restored to passenger car 46.

Restored as passenger tram in 1959 or 1960 using seats and other fittings from the lower deck of Sheffield 133, which had previously been used as a tea room at Calver Sough. Brought to Crich in October 1960

Funding has now been secured to support the restoration of Sheffield 46 but a full programme of work in the workshops means that it will be some time before this major project can commence.