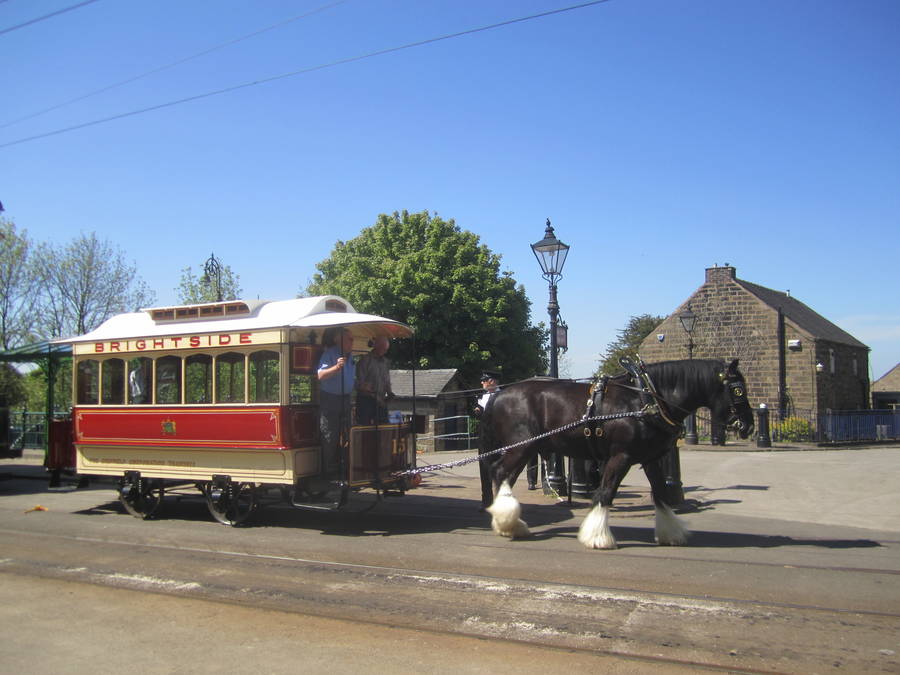 Built in 1874 by the Starbuck Car & Wagon Co. of Birkenhead (in the days before the name had become associated with coffee shops), Sheffield horse tram no. 15 is one of the oldest exhibits at Crich. It actually pre-dated the acquisition of the horse tram system by Sheffield Corporation in 1896, but retained the same number and route colour after the change-over.

The single deck car one horse tramcar was one of a batch of 8 that were built for the Sheffield Tramways Company.  It weighed 29 cwt when built, cost £200 and could accommodate 16 passengers. The car was initially used on the Brightside line and was stabled, along with the horses, at the Tinsley tram depot.

Instead of being scrapped when Sheffield’s tramway was electrified in 1902, number 15 was converted into an electric breakdown car at the Nether Edge depot. In its new Prussian blue livery and bearing the number 166, it was then given a new lease of life towing tram trucks from Tinsley to Nether Edge before returning with partly completed trams to the paint-shop at Tinsley. In 1913 a heavy duty girder truck was fitted to the breakdown car (presumably in the interests of added stability). The tram continued to serve as a works car (after being further renumbered as 375 in 1933) until 1946 but was then given another makeover by being reconverted back to a horse tram in time for the Jubilee celebrations for Sheffield Corporation’s tramways.

On 11 July 1946, it appeared (perhaps unsurprisingly, but nevertheless inaccurately) for a ceremonial outing as horse tram number 1. Unfortunately for the two brewery horses that were given the ‘honour’ of hauling it, the makeover did not extend to the replacement of the heavy girder truck that had been fitted to the breakdown car in 1913, which must have increased its weight to well beyond the original 29 cwt. After this brief moment of glory the future of the car looked precarious once more as the car was scheduled for disposal and was stored at Tinsley depot throughout the 1950s, losing its girder truck in 1956. A group of local TMS members came to the rescue by purchasing the remains and presenting the tram to Crich in November 1959. The process of restoration then resumed with the acquisition of authentic horse tram wheels and axle boxes from Glasgow and a return to its original Sheffield Corporation livery as Brightside car no. 15. Once at Crich, the tram played an important part in achieving one of the fledgling museum society’s principal aims: that of demonstrating its trams in operation.  On 25th August 1962, 15 clocked up an important ‘first’ by making a return trip from near the Press building to near the Weighbridge building while being pulled by the society’s own horse, Felix, though he turned out to be unsuitable for passenger carrying duties.

Nevertheless, in the following year the tram again made history by inaugurating – with the aid of a specially trained local farm mare called Bonny – a passenger service on Whit-Sunday, 2nd June 1963.  This was over a year before the commencement of electric tramcar operations.

Since then, Sheffield 15 has no longer been required for regular passenger operations, but it still puts in an occasional appearance most years for special events such as the Edwardian Weekends.  It can also be seen on a limited number of horse tram days that are scheduled in the course of each season. A brief glimpse of Sheffield 15 being pulled by Bonny in the early days of tramcar operation at Crich (1964) can be seen on the British Pathé news website by following the link to:
http://www.britishpathe.com/video/trams-and-tram-museum/query/tram
[The sequence appears towards the end of the newsreel] Sheffield 15 back in service on the Moor, in Sheffield, Christmas 1961. Photo courtesy of Crich TMS photo archive.

Even after its arrival at Crich, however, number 15 has maintained some links with its original home tramway by returning on a number of occasions including a visit in 1961, the year after the Sheffield system’s closure, when it appeared as part of the pre-Christmas celebrations by giving rides to the public on tracks that remained on the Moor. A repeat visit was made in 1975 for an open day at the (now closed and demolished) Queen’s Road works.

When Sheffield’s Supertram system opened in 1995, Sheffield horse tram 15 paid a further visit on 17 October, when it posed alongside one of the new second generation trams.  It was also loaned to the Kelham Island industrial museum in 1995 for a display featuring ‘Sheffield on Wheels’. During its long and eventful life, Sheffield 15 has served under two different operators, been powered by two distinct forms of traction, operated as both a passenger tram and also a works vehicle and has carried four separate numbers.  Even while in preservation it has frequently acted as a trail-blazer at Crich and also as an ambassador for the Tramway Museum Society, particularly during its regular return visits to its home city. Not bad for a tramcar that is just five years short of its 150th anniversary!

Converted into electric breakdown car no, 166 in 1902, fitted with GE 58 motors, B18 controllers and Brill 21E truck initially and repainted Prussian blue.
Truck replaced with Milnes girder truck in 1913.
Re-numbered as 375 in 1933.
Re-converted to horse car by Sheffield Corporation in time for Jubilee of Sheffield Corporation tramways on 11 July 1946 and renumbered as ‘1’

No longer used as works car after 1946 conversion back to being a horse car; stored in Tinsley depot for most of the 1950s, while scheduled for disposal.

Bought from Sheffield Corporation in 1959 by local TMS members and delivered to Crich on 21 November. Fitted with genuine horse tram wheels from Glasgow and repainted in original Sheffield Corporation livery as Brightside car no. 15. The tramcar was given a thorough overhaul between the summer of 1993 and spring 1995.

Current status
Restored and operational. Commissioned for occasional passenger service during the current season.
Date started operating at Crich
1963. Since 1984 has been used on a restricted basis in 33 seasons, the most recent of which was 2019.
Total mileage covered at Crich
257
Current location
Exhibition Hall