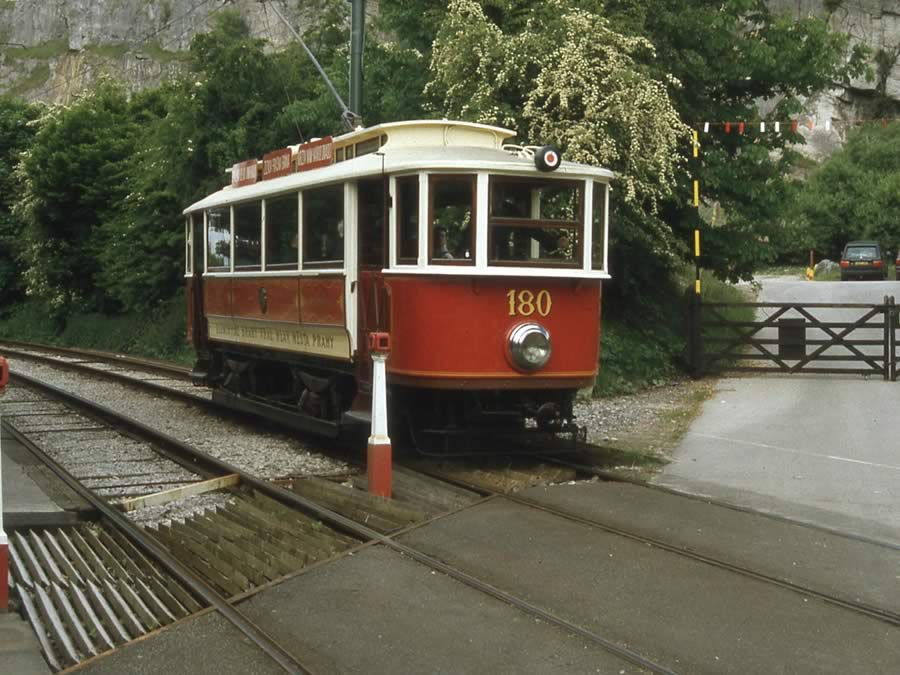 Although tramcars can fairly claim to have changed the course of history as they contributed to the transformation of predominantly agricultural countries into modern industrialised nations, few individual tramcars have entered the history books. One rare exception is Prague 180 (originally numbered as 266), which hit the headlines in August 1968 while en route from its native Czechoslovakia to its new home in Crich, Derbyshire, when it narrowly escaped being blockaded by the invading Russian army as it put an end to a period of political liberalisation known as ‘the Prague spring’.

The original tramcar no. 180 dates back to 1905, when it was built by Franz Ringhoffer and Co., and has an interesting history. It was one of a small number of tramcars that were equipped with an unusual method of current collection that made use of surface contact studs laid at intervals between the tracks instead of the more commonplace overhead wires or central conduit rail.

The fifteen tramcars that were adapted in this way were used on a route that crossed the historic Charles bridge, which is one of the oldest stone bridges in Europe and dates back to 1357-1362. Because of its antiquity there was no overhead wiring on the bridge itself during the early years of tramway operation and a famous photograph featured number 180 crossing the bridge without any visually intrusive wiring to detract from the scene.

However, surface contact stud operation was abandoned in 1908. In that same year tramcar no. 266 (the car that is now in Crich’s collection) was built. Although superficially similar in appearance to 180, this tramcar belonged to a different series and was never equipped to take up current by means of surface studs.

Continental tramways differed from their British counterparts in generally favouring small single deck motor trams pulling one or more trailers in preference to double decked tramcars. The characteristic design of single deck tramcars such as Prague 180 and 266 influenced the appearance of tramcars in a variety of other Czech cities and others as far afield as Dubrovnik and Moscow. After surviving the conflict of World War 1, car 266 was slightly modernised during the inter-war years by equipping it with platform doors, redesigned seats and new electrical equipment. By the end of the second world war the tramcar, which by now had also survived the Nazi occupation, was becoming obsolete and in 1949 was transferred to a provincial system at Olomouc, where it was renumbered 61.

In 1967 Crich hosted a visit by a group of representatives from CKD Tatra (the tramcar manufacturers who had taken over from Ringhoffer), who generously offered to donate a tramcar to the TMS collection. Olomouc tram number 61, which by this stage had been relegated to serving as a depot shunter, was selected for this purpose and was largely restored to its original Prague condition prior to its transfer.

Instead of reverting to its original number (266), it was given the same number as its somewhat more illustrious forebear (the one that featured in the famous photograph taken on the historic Charles bridge) and restored to the same livery. The restoration and despatch to the west was completed just in time, for a mere 36 hours after 180 was loaded onto a transporter and exported to West Germany the Red army invaded Czechoslovakia and sealed it off. The story of this dramatic escape featured prominently in contemporary news reports and captured the public’s imagination, bringing some welcome publicity for the museum itself. A British Pathe newsreel of the time shows the tramcar on a Czech low-loader flying British and Czech flags as it heads up the dual carriageway towards the end of its journey to Crich. The sequence can be viewed by following the link (below) to the British Pathé newsreel website.
http://www.britishpathe.com/video/czech-tram/query/Czech+tram Following its arrival at Crich, Prague 180, as it was then officially known, was inaugurated by local MP George Brown and became known for a while as the ‘freedom tram’, in recognition of its dramatic escape. It then ran almost every year until 1997, by which time it needed a major mechanical overhaul. It did return to passenger service briefly in 2001 but is currently displayed in the depots in non-operational condition. 180 shortly after its arrival at Crich. Photo courtesy of Crich TMS photo archive.

Tramcars somewhat similar in appearance to Prague 180 can still be seen operating in its native city on the nostalgic tramline no. 91, which was electrified in 1891 and commenced as a nostalgic tourist tram route exactly a century later. 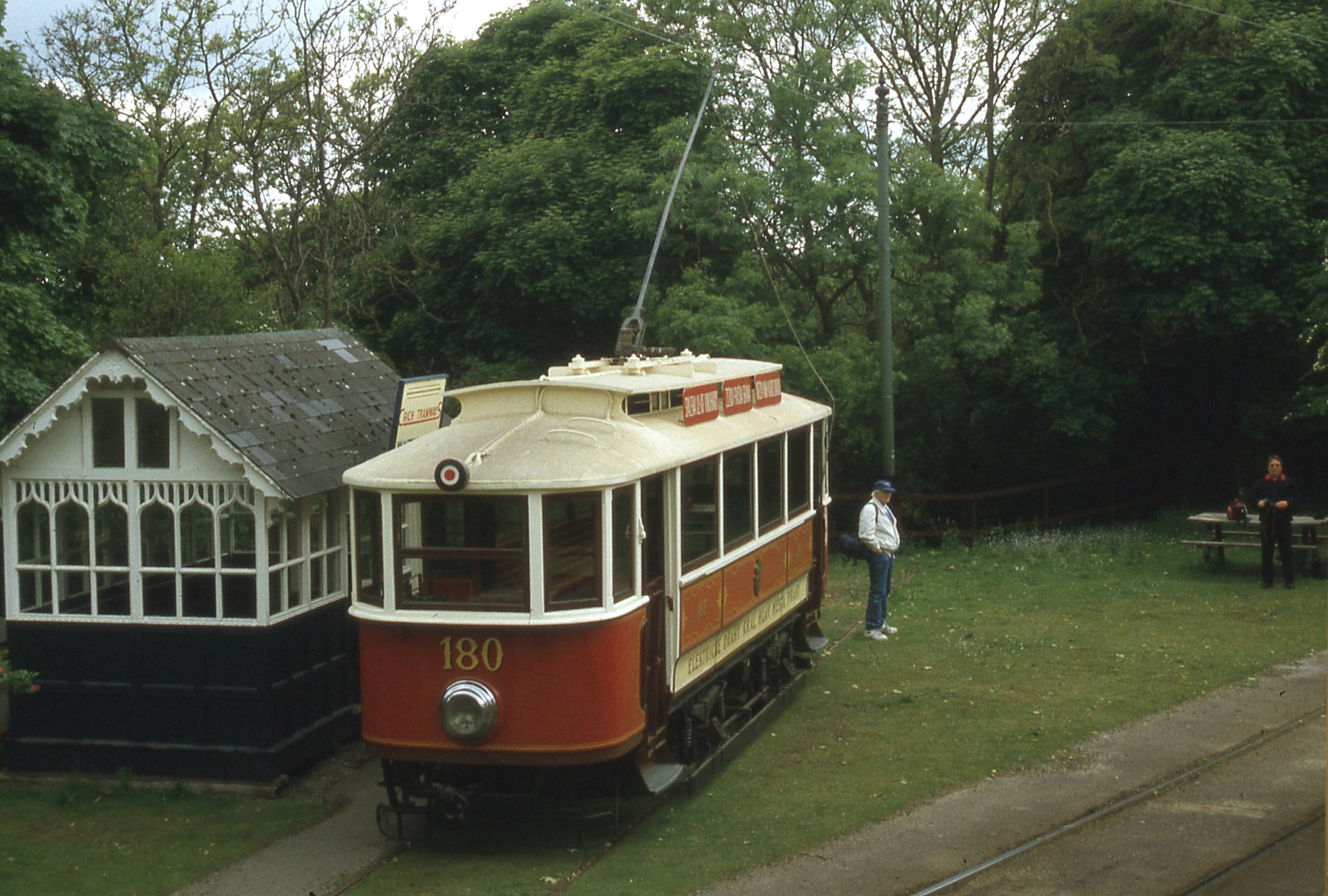 Somewhat modernised during the inter-war period.by the addition of platform doors, redesigned seats and new electrical equipment. During the 1930s the wheelbase on the trucks was reduced from 3.6 to 3.1 metres. At some state the original trolley pole was replaced by a pantograph.

Withdrawn from service in Prague in about 1949 and transferred to the provincial town of Olomouc, where it was renumbered 61.
Withdrawn from Olomouc in 1967

Eventually it was relegated to the role of depot shunter but it was offered to the tramway museum in 1967.

Restored to its original 1905 condition in Prague but now numbered 180 and shipped to Crich in August 1968 immediately prior to the Russian invasion of Czechoslovakia.