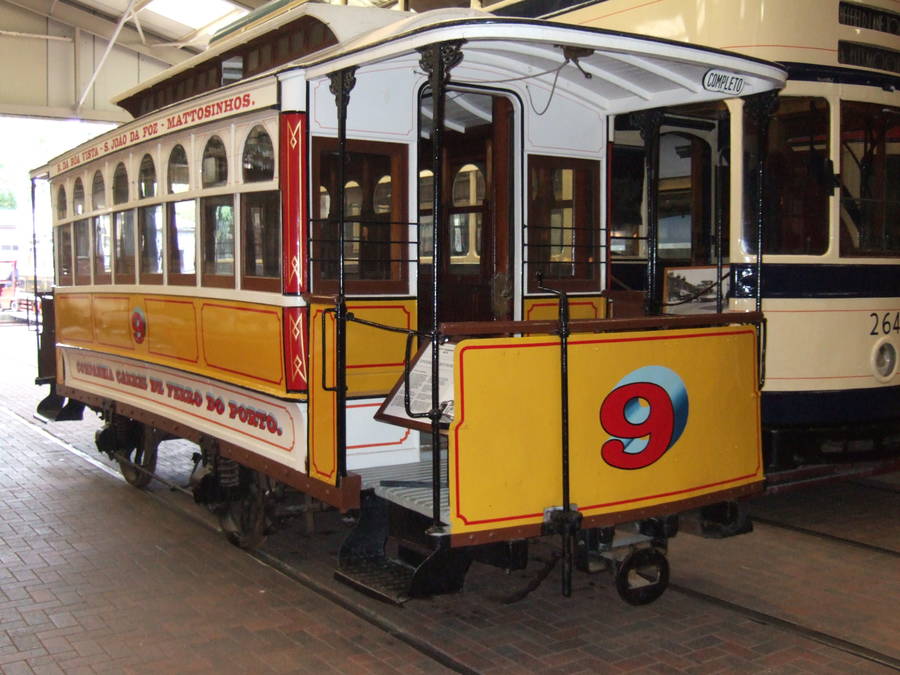 Oporto 9 was built by Starbuck Car & Wagon Company of Birkenhead in 1873 to a design that was derived from the very first tramcars to be imported into Britain by George Francis Train, who founded tramway operations in this country in 1860-1. As one of the oldest and longest-serving tramcars in the world it occupies a very important place in the history of British tramway development.

The tramcar was almost certainly built as a two-horse single deck tramcar (though similar double deck cars are also known to have existed) with an 8-window design that had also been supplied for a tramway in Buenos Aires. This particular car was destined for Portugal’s second city, Oporto, which had opened Portugal’s first urban tramway in 1872.  Similar tramcars were also supplied by Starbucks to tramways in Birkenhead, Govan, Hoylake, Leicester and London.

The motive power was initially provided by mules (at least two, though four or even six mules were required for one particularly steep section of track) but subsequently this particular car was converted into a trailer for use with both steam and electric tramcars.

The tramway in Oporto was somewhat unusual insofar as it also operated – in addition to its regular passenger services – a number of freight and goods services including the carriage of coal and also sardines. In fact it is unlikely that such a venerable tramcar as Oporto 9 would have survived but for the need to convey workers to and from the sardine fisheries, for which purpose the services of wooden-seated trailers such as number 9 were retained, often with a board reading “Operario”, which designating them as being reserved for the use of workmen, whose clothing might otherwise ruin the rattan seats of the company’s electric tramcars. Oporto 9 continued to operate this service until 1960 when it was finally placed in store some 87 years after its inauguration. Realising its significance in the annals of British tramway history, one of the founding members of the Tramway Museum Society purchased the car in 1963. Its very well publicised return to Britain the following year was accomplished with the support of Geo. Sandeman, shippers of port from Oporto, who arranged for it to be transported on one of their regular ships along with the more conventional cargo of wine and cork. Oporto 9 arriving at the museum on a low loader. Photo courtesy of Crich TMS photo archive, circa 14/10/1964.

After a 24-hour delay brought about by gales in the Bay of Biscay, the tram – replete with a pair of roof boards advertising the products of its sponsor – was unloaded by means of a floating crane, after which the postponed reception was finally able to take place. The tramcar’s journey then continued up the relatively-recently opened M1 motorway – almost certainly the first time it had been used to transport an entire tramcar – with further receptions en route.

When it eventually arrived at Crich in October 1964 the car was attached to one of the resident tramcars (Blackpool 49) for a successful trial run, having generated a huge amount of very welcome publicity for the museum as well as its sponsor. Oporto 9 being towed by steam tram John Bull at the museum. Photo: courtesy of Paul Abell.

The original role designated for Oporto 9 after its arrival was to provide a trailer car for the society’s steam-powered tram, John Bull. In its early days (starting in 1966) it provided a regular service in this capacity, at a time when the electricity supply to the museum was not fully dependable. Indeed, in acting as a trailer behind both steam and electric tramcars during its early days at Crich, Oporto 9 was reprising the role that it had originally performed many years previously in its native city. Oporto 9 featured in a Victorian street scene photo-shoot together with costumed actors on 14/8/1971.  Photo: Richard Lomas.

In the early days it was also occasionally pulled by a horse. Since then, however, the tramcar has been displayed in the main exhibition hall, where it not only helps to illustrate the very earliest era of Britain’s involvement in tramway development, but also provides a visible reminder of the long-standing mutual trade links between Britain and Portugal.

Type of tram
Originally built as a single deck two-horse tram, but later converted to a trailer tram for use with either steam or electric tramcars
Livery
Yellow, white and red
Seating capacity
18
Date built
1873
Manufacturer of body
Starbuck Car & Wagon Co.
Manufacturer of truck
Trunnion
Gauge
4’ 8½”
Withdrawn from service

Placed in storage and repainted in 1960, prior to purchase by a member of the Tramway Museum Society and eventual repatriation to Britain in 1964 with assistance from Geo. Sandeman, shippers of port wine.