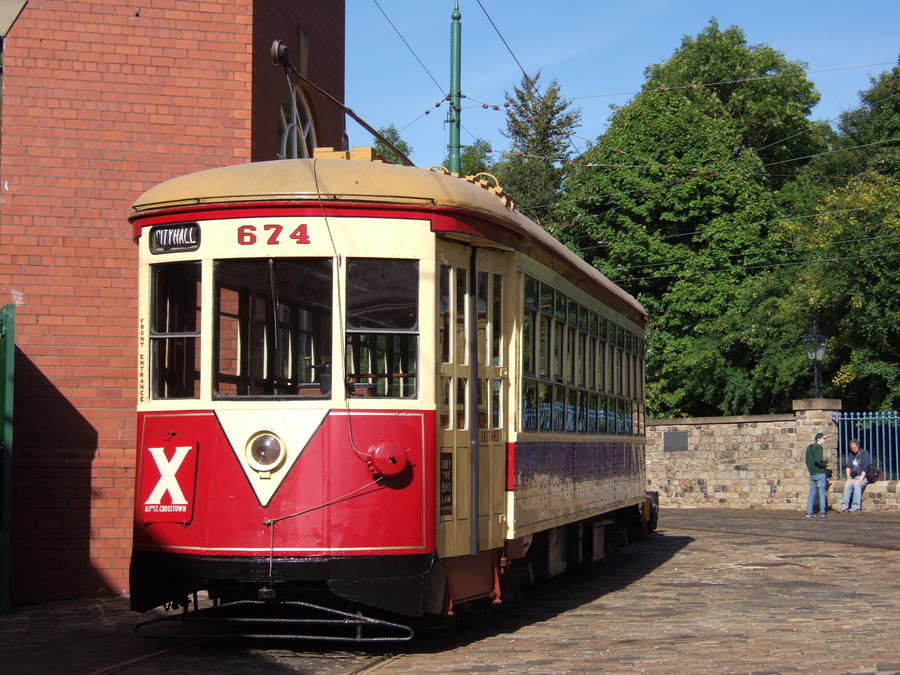 New York Third Avenue Railway System number 674 is the sole representative at Crich of the vast North American tramway systems that by 1917 covered some 45,000 miles of track across the United States alone, over which around 80,000 trams (or trolley cars as they were referred to over there) plied for service.

The Third Avenue Railway System was a street tramway operator whose main line ran along Manhattan’s Third Avenue with additional lines in the Bronx, Westchester County and elsewhere in Manhattan.

By the time 674 came to be built, in 1939, streetcars in New York were facing an uncertain future as the mayor (Fiorello La Guardia), who had taken office in 1934, took the view that they failed to project the modern image that he favoured. He indicated that he didn’t want to renew tramway licenses once the current ones expired, which would have entailed a total replacement of the trams by 1960 at the latest. By the end of the thirties the TARS was, in any event, in a dire financial situation; having gone bankrupt in 1908 it had never fully recovering since then and the fleet was, by this stage, worn out.

Consequently, investment in completely new tramcars was out of the question. Instead, 61 relatively new second hand cars were bought. In addition, the existing fleet was reworked by the TARS workshops to produce new looking cars using as much existing equipment as possible to fill the gap. No fewer than 336 of these ‘renewed’ cars were built by TARS in its own workshops between 1934 and 1939, 674 being one of the last of these to be constructed.

This precarious outlook may explain why 674 was constructed in-house in 1939 to a relatively outmoded traditional streetcar design using many second-hand components from cars that had already been scrapped, at a time when many other operators were turning to a much more modern design known as the “PCC” tramcar (as exemplified by The Hague 1147).

As befits the popular image of many American products, the all-steel body of the car is much more amply proportioned – particularly in the width – than standard British tramcars of the era and this was to present something of a challenge when the car came to be housed in the running sheds at Crich once it had been acquired for preservation. The body itself is likewise rather rugged in appearance, with a profusion of rivets along the sides.

A typical feature that it shares with many American streetcars is its semi-convertible design, which incorporates windows that are fully retractable and capable of being slid up into the capacious roof space in the event of hot and humid weather. Another tramcar in the collection that is built to a similar semi-convertible design is Oporto 273. A more advanced and somewhat less typical feature is that 674 was designed for driver-only operation – known as Pay As You Enter, or PAYE -with separate entrance and exit at front and rear respectively. It was also equipped with air-operated doors and folding steps. The rather spartan driver’s cab. An unusual feature is the foot-operated brake. Photo: Paul Abell.

As the second world war drew to a close, number 674 was facing redundancy since New York Third Avenue Railway System was no longer able to renew its operating franchises for ‘trolley services’ as the various routes came up for renewal, forcing it to switch to diesel powered motorbuses instead. Consequently, 674 was withdrawn from service in 1948 after less than ten years of service.

An additional factor which hastened the demise of New York’s trams was America’s decision to launch the Marshall Plan, which was intended to aid European reconstruction in the aftermath of the war. One aspect of this plan involved the shipment of surplus American equipment, including tramcars, to replenish war-damaged tramcar fleets and other industrial infrastructure in mainland Europe. As a result, New York’s last tramcars operated in 1952.

However, the introduction of the Marshall Plan did give a new lease of life to Number 674, together with 41 of its 3rd Avenue contemporaries, when they was despatched to Vienna. Most of Vienna’s 4,000-strong pre-war fleet of trams had been badly damaged in the conflict, 400 of them beyond repair. So the ‘Amerikaner’ trams, as they became known, were badly needed, though their wide bodies restricted their use to routes where the tracks were more widely spaced than usual. Fortunately, some former steam tram routes, such as Line 331 to Stammersdorf, proved suitable for the newcomers.

Although it had originally been equipped with double trolley poles, these were removed and replaced with a pantograph after its arrival in Vienna. Before entering service it was also renumbered as Vienna 4225 and repainted in the appropriate (red and white) livery.

Following these modifications, the tramcar provided another twenty years of service in its adopted city before being withdrawn for a second time in 1969 after a new law came into force requiring track brakes on trams that operated over 40 kph (25 mph). The tramcar was then donated to – and received by the British Ambassador to Austria on behalf of – the Tramway Museum Society, before arriving at Crich in April 1970 after a journey by rail, cargo ship and low loader. To begin with, it continued to operate at Crich in its latter guise as Vienna 4225, and still sported a pantograph until 1976. Vienna 4225 in service at Crich shortly after its arrival. Photo courtesy of Crich TMS photo archive.

When the car was repainted in 1979 it was restored to its New York livery and was reunited at the same time with its original twin trolley poles. It continued in service as part of the regular passenger fleet in most years until 1985, since when it has been on display as a static exhibit. For many years it was included in a display devoted to PCC tramcars. New York 3rd Avenue 674 in service at Crich some time between 1980 and 1983. Photo courtesy of Crich TMS photo archive.

North American streetcars represented a major milestone in the evolution of tramcar design and technology, even though they differed considerably from those developed in the UK and also the rest of Europe.

In one respect, however, they achieved a degree of global recognition that is unique among tramcars thanks to their immortalisation in Tennessee Williams’ 1947 play ‘A Streetcar named Desire’. Even though the streetcar in question took its evocative name from a district in New Orleans rather than New York, in appearance it would have closely resembled number 674. As such it is, both historically and culturally, a very significant vehicle to have in the museum’s collection.

Trolley poles replaced by pantograph on entering service in Vienna. Renumbered as Vienna 4225 and painted in Vienna’s red and white livery

Presented to the British Ambassador in Vienna who received it on behalf of the TMS in 1969.

Brought to Crich in April 1970 and formed part of the operational fleet until 1985. At first it operated as Vienna 4225 with a slightly raised pantograph. In 1979 it was restored to its original Third Avenue condition as 674 including the fitting of twin trolleys.