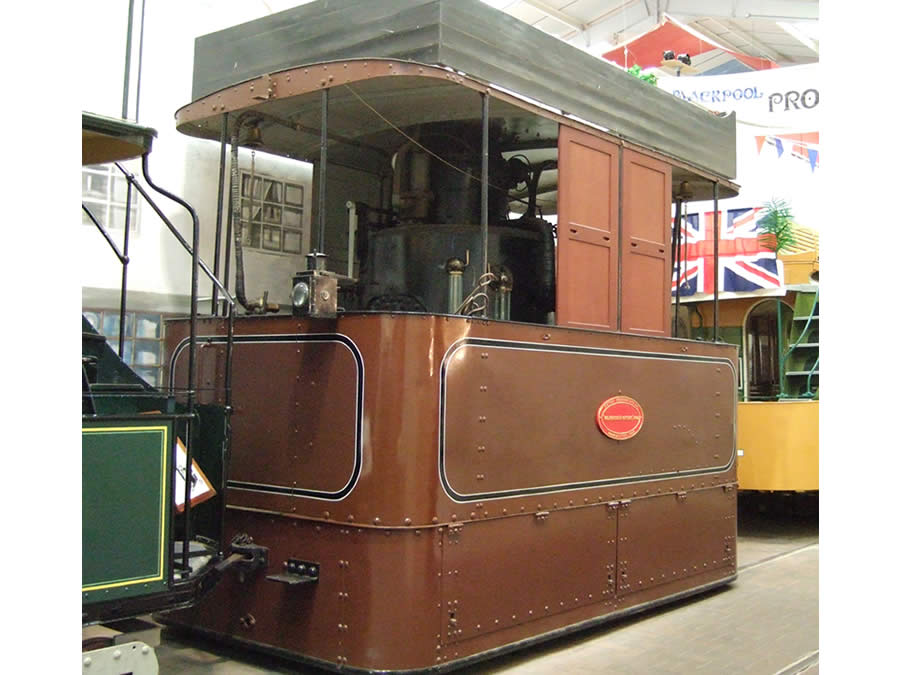 Although steam-powered trams were once a reasonably common sight on Britain’s roads, they would have borne only a superficial resemblance to NSW Government number 47, even though it was built in the Beyer Peacock works in Gorton, Manchester, in 1885. This is because it was destined for export and as it was expected to be pulling much heavier loads it was much larger than those built for the home market. With 30 inch driving wheels and weighing almost 16 tons it was a true giant of a tram engine, though it did boast a number of features in common with other road-going locomotives including the fully enclosed wheels and a mechanism – in this case a “Wilkinson Patent” exhaust superheater – that was designed to reduce the amount of smoke emitted.

It was shipped out to Australia in April 1885 so that it could be assessed by the New South Wales Government Tramways for possible use on the Redfern Station route in Sydney, but because it proved unsatisfactory in operation – running short of steam despite being heavy on fuel – it lost out to a rival design (the Baldwin steam tram). “John Bull”, as it was then known, was then employed for a time on certain railway and colliery construction projects on the New South Wales railways’ Wellagong-Clifton line between 1887 and 1888.

What happened to it next is a bit of a mystery since the next time it was heard of was when it resurfaced again in 1890 back at the Beyer Peacock works in Manchester. The company’s records intriguingly indicate that it was ‘salvaged’ in 1890, which suggests a narrow escape from a watery grave, but beyond this there are no details of its return journey. From such ignominious beginnings, few could have imagined that the tram would go on to lead a long and active life back in its native land. By now known as Beyer Peacock number 2, the tram was converted into a railway-style works shunter, which entailed the removal of its wheel skirts and conversion from double-ended to single-end controls along with the fitting of railway-style buffers and couplings. A steam brake was added in 1915 and a new boiler (built to the exact design and specification as the original) in 1930. A new superheater was fitted in 1958.

Apart from these modifications, however, the tram is almost uniquely authentic with most of its components dating back to 1885. This includes the wheels and axles which, surprisingly, were made by Krupp in Germany. So while it might not be historically all that significant from a purely British tramway perspective, from an industrial archaeological standpoint it is incomparably valuable. As a works shunter, the tram operated in the firm’s large works complex towing huge Beyer-Garrett locomotives from one shed to another. By this stage unofficially known as the “Coffee-Pot” it continued to undertake such heavy duties, remarkably, until it was finally withdrawn from service and put into storage in 1959. The tram arrived at Crich in 1962 and was operated under steam for some years from 1966. A period of off-site storage between 1971 and 1978 was followed by a return to steam in the 1980s, during which it even performed on the Santa specials. However, the work involved in firing it up, supplying it with coal and clearing away the ash helped to explain why steam traction gave way to electricity on Britain’s tramways in the early years of the twentieth century. Arguably, number 47’s finest hour in preservation came in 1985 when – during its own centenary year – it was invited to participate in the centenary celebrations for Blackpool Corporation Tramways: the first and only time it has operated on a British street tramway. During that brief period it clocked up a notable first when it became the first steam tram in Britain to run through traffic lights while under its own power. This was also the first time that the Tramway Museum had been granted running powers over an operational tramway. Sadly, the failure of an inaccessible component in 1989 put an end to its steaming operations at Crich, since when it has largely been confined to a more sedentary existence as a static display exhibit. It did enjoy another brief spell in the spotlight in August 2009, however, when it was invited to Manchester Museum of Science and Industry to help celebrate the centenary of the first Beyer Garratt articulated locomotive. This also provided an opportunity for a nostalgic return visit to the factory in which it had been built and spent most of its working life.  Another bonus was that the damaged suspension unit – thought to have been inaccessible – was in fact repaired prior to the visit. Although “John Bull” is not a typical British steam tram engine, the Tramway Museum Society does have within its possession the remains of a second such engine – Manchester Bury Rochdale and Oldham steam tram no. 84 – which is much more representative of the 500 or so steam tram locomotives that operated in Britain in the 1890s. Unfortunately, prior to its acquisition the engine had been dismantled as part of a restoration project that was never completed and so currently consists of a collection of parts. Completing the restoration would be a long and expensive project but there is at least the potential to bring back to life a working British steam tram provided the necessary resources can be found to complete such an ambitious undertaking.

Although it is no longer possible to see steam trams in operation in the United Kingdom, there is some interesting footage on a British Pathé newsreel that was filmed in 1957 of the last journey of a Dutch steam tram that used to operate in the Arnhem area. This can be viewed by following the link to:
http://www.britishpathe.com/video/the-flying-dutchman/query/tram

Removal of wheel skirts and conversion from double-ended controls to single-ended in 1890 together with the fitting of railway-style buffers and couplings. New steam brake added in 1915. Re-boilered (but to the original design) in 1930. Fitted with a new superheater in 1958.

Repatriated.to Britain in 1890 and converted into a works shunter known as Beyer Peacock number 2

Renovated by Beyer, Peacock; re-equipped with wheel flanges and re-tyred. It arrived at Crich in May 1962.
July 2009 – damaged suspension unit repaired prior to temporary loan of steam tram to the Manchester Museum of Science and Industry.