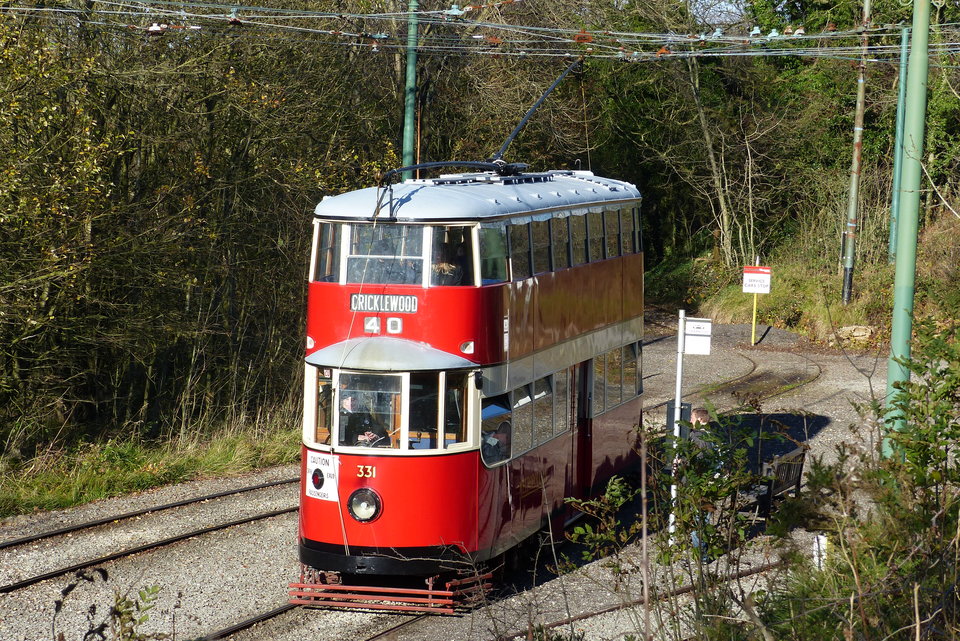 In the early years of the electric traction era, tramcar construction was mainly concentrated in the hands of two or three specialist manufactures such as G F Milnes of Birkenhead, Brough of Loughborough or English Electric of Preston.

In later years, however, and particularly as competition from motor buses and coaches intensified, a number of operators turned to other suppliers, some of whom were themselves involved in bus manufacture or even, as in the case of MET 331, the construction of underground trains.

Very often their products differed markedly in appearance from those emanating from more traditional manufacturers just a few years earlier (such as Blackpool 40, which is less than five years older than 331 but looks as if it hails from a much earlier era)

Metropolitan Electric Tramways was always a pioneer in tramcar modernisation and number 331 was built as the third and final prototype in a batch of experimental tramcars (each incorporating slightly different design features) in a quest for the most suitable kind of vehicle for contemporary traffic needs. Elements of each of the prototypes’ design were incorporated in a fleet of 100 modern trams that came to be known as “Felthams” because they were built by the Union Construction Company that was based in Feltham

The most distinctive and radical design feature of 331 was the incorporation of a central entrance doorway with twin internal staircases instead of the normal access via the end vestibules. This arrangement was intended to facilitate rapid loading and unloading and could have lent itself to a cost-saving ‘pay-as-you-enter’ system, particularly as the driver had a clear view of the nearside doors from his compartment. Unidentified ‘Feltham’ tramcar that was derived from MET 331 and the other two prototypes though without 331’s central entrance. D.W.K. Jones, Hanwell depot; date unknown.

This particular aspect did not feature on the ensuing fleet of Felthams, largely because the metropolitan police objected to it (presumably on safety grounds). They would not have objected if an extra conductor had been deployed, though this would have defeated the cost-saving objective. However, a second distinctive aspect of 331’s design – its raised cab, which afforded a much better view of the road – did make it into production on the rest of the fleet.

Another innovative feature of the tram’s design related to the elaborate reversing mechanism on the upper deck’s transverse seats, which not only kept the ironwork hidden from view – where it was unlikely to cause injury to passengers – but also tilted the seat so that the slightly raised front edge afforded a more comfortable ride.

Attention was also given to the design of the driver’s cab, which was screened from view behind a safety glass partition equipped with a blind in order to reduce glare. Access for the motorman was secured via a swing door, to which a driving seat was also attached. The weight of the driver activated a bolt that slipped into the floor and prevented the door from being either blown open or interfered with from the passenger saloon.

The safety of passengers was not overlooked since the air-operated doors were designed to remain closed if the vehicle was travelling at more than two miles an hour, while the leading sides of the doors were protected by special sensitive edges intended to prevent injury to passengers or even damage to their clothing.

MET 331 acquired the nickname “Cissie” early in life, entered service in December 1930 together with two of the other prototype Felthams (320 and 330) and was initially deployed on the Cricklewood – Whetstone service 40.

In many ways it may be considered to have been a very successful initiative.  For one thing, it demonstrated that modernised trams were capable of generating an increase in passenger traffic and revenue for their operators.  In addition,it paved the way for a substantial production batch of 100 ‘Feltham’ tramcars that incorporated many of the design features pioneered by the three prototypes. It also influenced the design and construction of modern trams in other parts of the country including Aberdeen, Blackpool and Darwen.

Despite its many innovative features MET 331 was not destined to remain in London for long, however, and, ironically, it was these very innovations that were to seal its fate once London’s existing tramway operators were taken over by the newly-formed London Passenger Transport Board, or London Transport, as it became commonly known, just three years after 331 was built.

The new organisation first inaugurated a process of standardisation and then decided to replace all of London’s trams with trolleybuses. MET 331 (now renumbered as LPTB 2168), was definitely something of an oddity with its non-standard control gear and unique bogies. Moreover, because of its central entrance doors it lacked the space required to carry a conduit plough, and so was confined to overhead-only services, many of which were being converted to trolleybus operation. It was only a matter of time, therefore, before the tram was withdrawn in August 1936. As it was only six years old by this stage, however, it found a ready buyer in Sunderland Corporation, which had a long history of acquiring second hand trams from other operators to add to its eclectic fleet of vehicles.

Renumbered for a second time as Sunderland 100 and equipped with a pantograph in place of its twin trolley poles, the tram embarked on a second lease of life in a new livery.

Although it spent the war years in storage, it continued in service until May 1951 when it was withdrawn for a second time and sold, the following year, to the Light Railway Transport League, whose founder member, JW Fowler, was responsible for its preservation. It was then stored in various locations before arriving in Crich in 1961. Sunderland 100 arrived at Crich on the back of a Foden low-loader in 1961. Photo courtesy of Crich TMS photo archive

The tram was repainted in its MET livery and restored mechanically and electrically by volunteers at the museum in the early 1970s.  A number of test and demonstration runs established its viability as a working tram at around this time.  As with many other recently preserved trams, however, it was to be some time before sufficient time and funds were available to support a full restoration.

An unusual opportunity eventually presented itself when the Tramway Museum Society was asked to provide a number of trams to carry visitors at the Gateshead Garden Festival in 1990. As a large capacity working tramcar with a north eastern connection, Sunderland 100 was an obvious choice of vehicle and it was in this guise that it was initially restored, and briefly ran at Crich, in 1989. Although 331 was initially repainted in its original MET livery, it was reborn as Sunderland 100 in anticipation of the Gateshead Garden Festival and ran for a while in this guise during 1989. Photo courtesy of Crich TMS photo archive.

A subsequent offer of sponsorship by British Steel provided additional funding but also resulted in a rather garish and decidedly non-standard blue and silver corporate livery for the duration of the festival. Following its return to Crich the tram was swiftly returned to its original MET livery since it was felt that its greatest historical impact was registered in the first two years of its existence while 331 was operating in effect as a pre-London Transport North London ‘demonstration’ tramcar.

Since 1991, the tram has been part of the regular operating fleet and there have only been a few years when it has not seen some service. Although 331 is the only one of the three prototype Felthams to have survived, two of the production models did also pass into preservation, one of which is now in the United States

Replacement of trolley poles with pantograph in 1937 on joining the Sunderland Corporation fleet as car no. 100. The drivers’ seats were also removed at this time, as was the air-powered door mechanism.

Placed in store in 1939 until after the war. Final withdrawal from passenger service in Sunderland in May 1951.

Sold to a group of LRTL members in 1953, and stored for a number of years in West Aukland and Bradford before arriving at Crich in June 1961.

The tramcar was restored to working order mechanically and electrically in the early 1970s by volunteers at the museum but a full restoration was only possible once funding became available.

Initially restored as Sunderland 100 in 1989 in readiness for service at the Gateshead Garden Festival the following year, where it appeared for a time in non-standard British Steel livery as part of a sponsorship deal. On returning to Crich it reverted to its original MET livery.

Current status
Restored to operational condition. Commissioned for service as part of the operational fleet during the current season.
Date started operating at Crich
1989. Has operated in 27 seasons, the most recent of which was 2019.
Total mileage covered at Crich
17,071. This includes 2127 miles as Sunderland 100 (in a non-standard British Steel livery) at Gateshead Garden Festival in 1990.
Current location
Depots