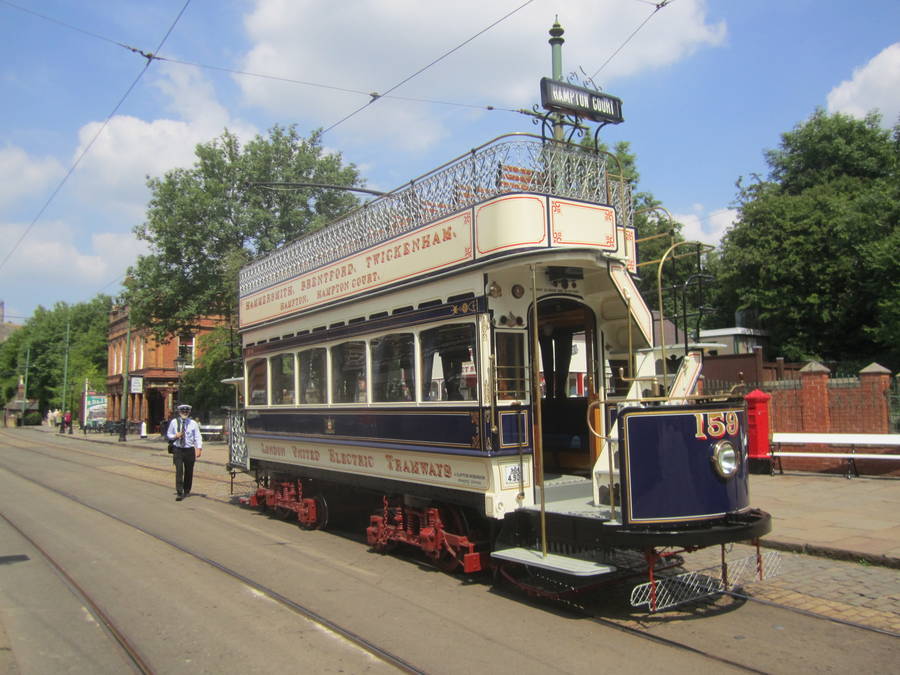 As a mode of mass transportation, tramcars are not normally associated with the luxury end of the transport market, but in early Edwardian days, when private cars were still a rarity, tram operators in affluent areas might expect reasonable levels of patronage provided they were able to offer superior levels of comfort and style. One such operator was London United Tramways, which began providing electric passenger tram services in the fashionable West London districts of Hampton Court, Hammersmith and Wimbledon in 1901. In order to appeal to the well-heeled passengers living along many of their routes, LUT purchased a large batch (150) of W class tramcars built to an elegant Edwardian design featuring six Tudor arch windows from the Shropshire-based factory of G.F. Milnes. The basic design was an open top, short canopy, double deck bogie car whose lower deck was sumptuously furnished with carpets, curtains, padded seating and inlaid walnut ceiling while the upper deck was finished off with an elaborate wire mesh screen. LUT 249, from the same class of type W tramcars as 159 photographed at Teddington. Photo courtesy of Crich TMS photo archive

The trams also boasted an unusual design of staircase in which the more usual spiral pattern is replaced by two short straight sections at an angle of 180 degrees, separated by a small ‘landing’. Known as the ‘Robinson’ staircase after the flamboyant and energetic tramway manager who designed and commissioned them, 159 is the only tramcar in the collection to feature them. 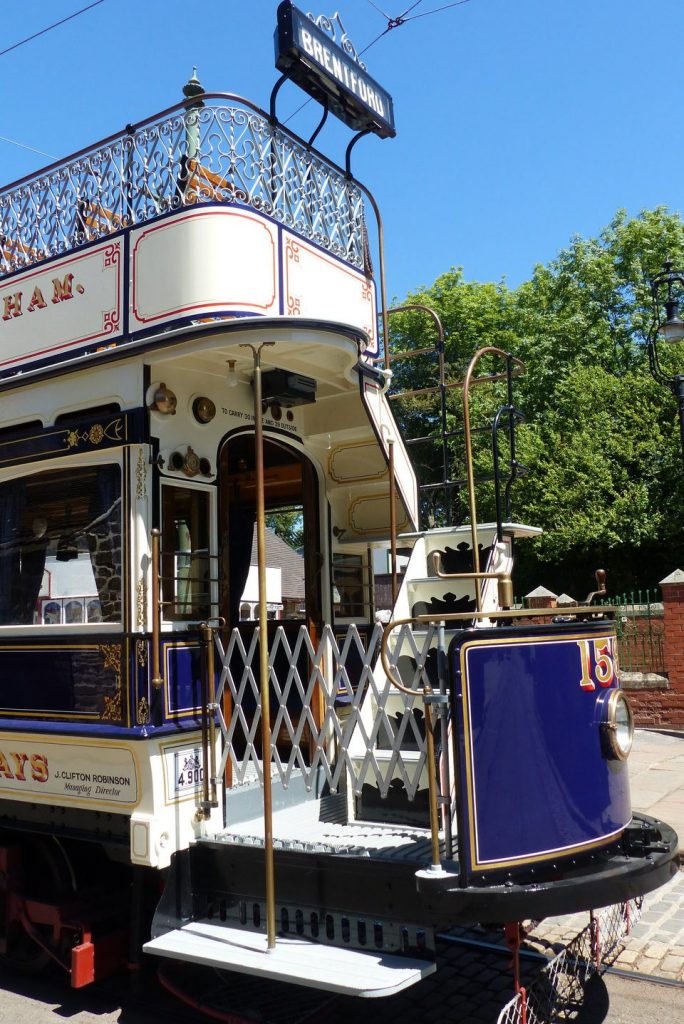 The unusual ‘Robinson staircase’ sets 159 apart from other tramcars in the collection. Photo: Jim Dignan, 22/6/2018

As for the colour scheme, in its early days London United Tramways adopted the old horse-bus practice of designating one colour for each route, which is thought to have aided identification by passengers at a time when many were likely to have been illiterate and thus unable to cope with route indicators. Consequently, the royal blue colour that was sported by 159 was reserved for cars serving the Hammersmith-Shepherd’s Bush-Hampton Court and Richmond Bridge routes while other routes were served by scarlet, white or even scarlet and white cars.

Each set of trams initially had curtains and cushions to match before these were discarded when they were found to ‘harbour vermin’ and the sumptuous padded seats were replaced by the more serviceable if less comfortable woven rattan.

Unfortunately, LUT’s expectations regarding the popularity of its luxury tramcars proved to be over-optimistic and many of the class, including 159, found themselves surplus to requirements and under-used. Consequently, many were put into store at Fulwell and, by 1923, 159 and 43 of its contemporaries were declared redundant and withdrawn from service after just 21 years.

As a result, 159 was not equipped with top covers (as 50 of its contemporaries were); nor was it sold on to other operators (as another ten of the class were).  Many of the surplus cars were scrapped, but a few, like 159, were dismantled and the bodies sold on for other uses.

Its lower saloon, together with those of two of its contemporaries, was converted into a house located in Ewhurst Green in Surrey, where it provided living accommodation for a couple for 55 years before being donated to the TMS in 1978. It was transferred to the museum’s off-site storage facility soon afterwards, where it remained in store until 2005, at which point sufficient funding became available to enable the lengthy and challenging process of restoration and reconstruction to finally begin.

As little of the original body material remained and none of the electrical equipment or running gear, getting the car back into running order presented a massive challenge.  This was accomplished thanks to generous financial support from the London County Council Tramways Trust, a grant from the Prism Fund (part of the Arts Council) and the skills and resourcefulness of the society’s workshop staff and volunteers. Many of the parts proved impossible to source from component suppliers and had to be designed and made in-house, using the limited amount of information that was still available after all this time.

Seven years later, on 7 July 2012, LUT 159 was launched as the latest – and most luxurious – addition to the passenger tram fleet at Crich during a ceremony that was attended by a descendant of the founder of London United Tramways and a member of the family who had once lived in the tram for so many years.

The arrival of 159 plugged a significant gap in the museum’s collection since it represents an early example of a high-capacity Edwardian era bogie tramcar that heralded a departure from the far more typical four wheel double deck tramcars of the time.

Since then it has become a popular member of the operational fleet and has now clocked up over 3,500 miles.  The tramcar entered the workshop in 2021 for remedial work to address its tendency to derail, so it is hoped that it will soon return to active service.

Upper deck removed and lower saloon sold off to serve as living accommodation. Donated to TMS and transferred to the museum’s off-site storage facility to await restoration in 1978.

A seven year process of restoration/reconstruction funded by the LCCTT with support from the Prism Fund began in 2005 and was concluded in July 2012.

Current status
Restored to operational condition but not currently commissioned for service.
Date started operating at Crich
2012. Has operated in 8 seasons including (most recently) 2019.
Total mileage covered at Crich
3,880
Current location
Depots