London Passenger Transport Board No. 1622 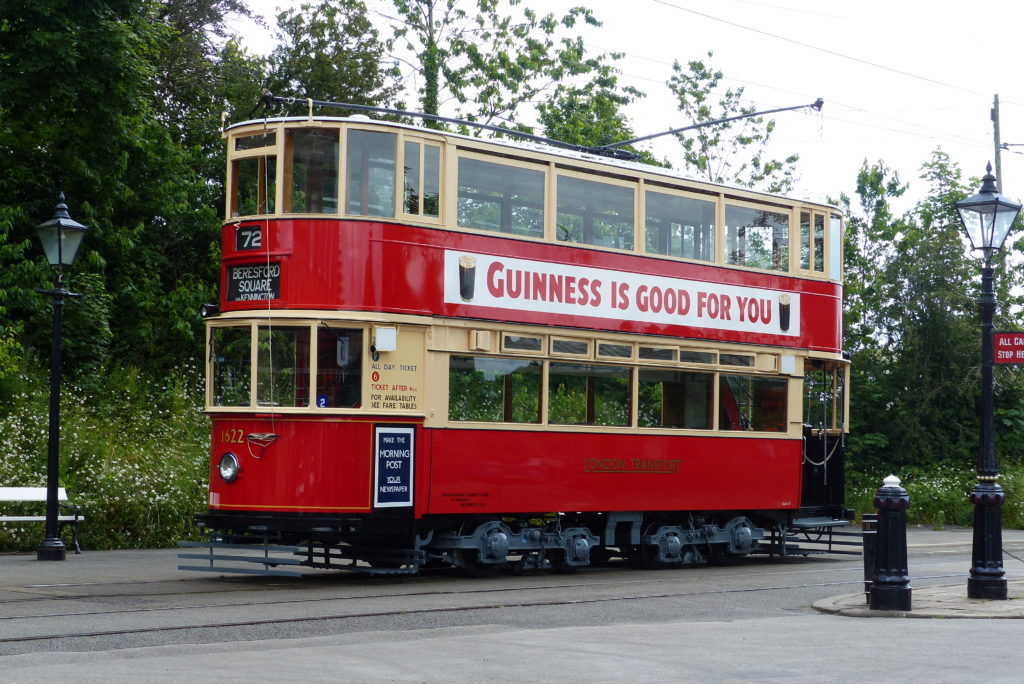 LPTB 1622 is the only remaining working example of the largest class of tramcars from anywhere in the UK as over 1,000 of these E/1 cars once operated in London; although one other example still survives, this is just a static exhibit. The tram originally entered service on the London County Council tramway in 1912 and is thought to have been assigned to the Poplar depot throughout its working life. Although it was fitted with a top cover from the outset the tram was extensively refurbished in 1928 – a process known as ‘Pullmanisation’ – which involved the addition of platform vestibules and more comfortable seating in an attempt to ward off competition from rival bus operators. Indeed, it was the first ‘Pullman’ E/1 on the northern part of the LCC network. The tram also participated in early trials with lead-free paint.

No. 1622 is one of the few tramcars at Crich to be equipped for operating on the capital’s extensive conduit rail system, which provided an alternative method of current collection to the more common but also more visually intrusive overhead line system. So, in addition to the normal trolley pole, No. 1622 is also capable of carrying a ‘plough’ under the body of the car, which enabled electrical current to be picked up from the central conductor rail instead of the overhead wire. At various points on the system tramcars had to switch their method of current collection from conduit to overhead line (or vice versa). This necessitated the inclusion of a “change pit” by the side of the track, which is where the tramcar relinquished (or picked up) its plough. the point at which a tram driver would ‘shoot the plough’ and raise the trolley pole on leaving a conduit section of track. Tramcar 1937 at Effra Road, Brixton. H.B. Priestley, 21/5/1949.

When travelling from a conduit section of track to one that was powered by overhead line a driver would need to stop the car short of the change pit at a short section of track that was supplied by both conduit rail and overhead line. Here the conductor would raise the trolley pole to the wire at which point the driver would “shoot the plough” by accelerating briefly, whereupon the plough would become detached from the tramcar and shoot along the grooved centre rail where it would be carried by its own momentum off to the side of the running tracks and end up in a short ‘siding’. Any spare ploughs in the siding could be removed if necessary and stacked up by the side of the track. When making the reverse manoeuvre the plough would need to be manually attached to the tramcar by the change pit operator. In order to do this, the operator would need to pull a plough back along the siding towards the tracks using a device somewhat like a garden fork with two ‘tines’ that were designed to slot under support points at each end of the plough. Once the plough had been brought to the point at which the siding was about to cross the running rail, the tramcar – still drawing its current from the overhead power lines at this point – would need to be driven slowly forward.

At this point the change pit operator had to locate the two tines onto the tramcar’s channel-section beams and signal the driver, who would then move the vehicle forward while the change pit operator walked alongside a step or two as the plough continued to move from the siding to cross the running track and take up its position in the grooved rail, which would by now be located under the centre of the tramcar.in readiness for it to start drawing current from the conduit itself.

Once the plough was on the carrier the fork could be withdrawn and the only remaining task was to stop the tramcar to enable the conductor to lower and secure the trolley pole in readiness for the next stage of the journey,.

In 1933, No. 1622 became part of the massive London Passenger Transport Board fleet which resulted from a massive reorganisation of London’s entire public transport system, but it was withdrawn from service in 1940 and moved to the Hampstead depot, where it was assigned to the ‘reserve fleet’ shortly after the outbreak of hostilities. Instead of returning to service after the war, the tram was sold off and both decks were moved to a caravan site in Hayling Island though the lower deck was subsequently transferred to an orchard at Liss, in Hampshire.

After providing a home for an elderly farm worker for many years, the remains of the tram then served as a chicken shed, dog kennel, apple store and general store for tools and hay before it was discovered by a hiker in 1969. Eventually it was transported back to London to commence a ten-year restoration programme that also necessitated the construction of a new upper deck and the sourcing of suitable trucks and underframe.

Fortunately, an appropriate upper deck was found not too far away at around the same time and this was dismantled on site in order to provide patterns and fittings for 1622. Much of the early restoration on the lower deck was undertaken by the London County Council Tramways Trust at various premises in London but the complex task of constructing a replacement upper deck, refurbishing trucks and uniting the various components was completed at Crich on 5th July 1997, which coincided with the 45th anniversary of the closure of London’s tramway system.

In view of the extensive reconstruction, substitution and renovation that has been required in order to get 1622 back into service it is technically more of a replica than a genuine restoration of the original vehicle; but since only one other member of the class is known to have survived, this was the only way to ensure that such an iconic tramcar could be represented in the operating fleet at Crich. 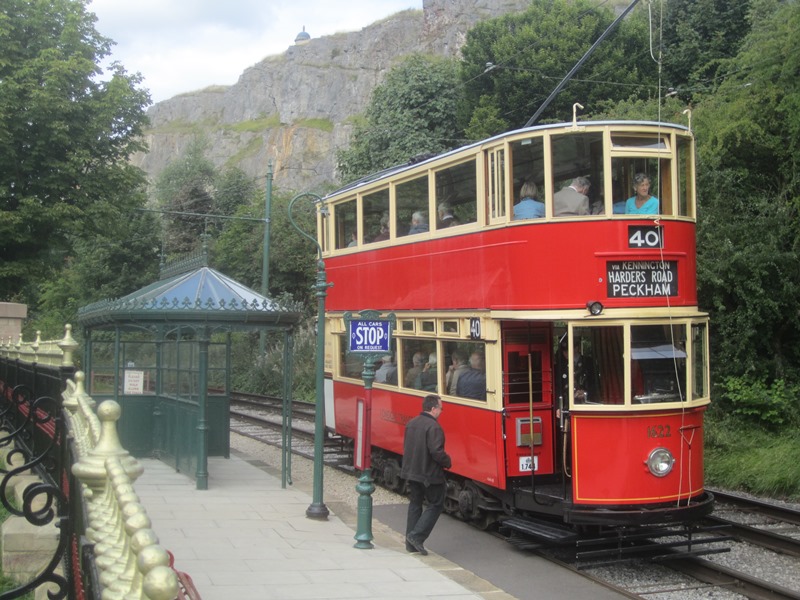 1622 at Victoria Park before its overhaul and repaint, 14th September, 2013. Photo: Jim Dignan

In the spring of 2020, 1622 was given a face-lift that entailed a complete repaint of the tramcar body and the attachment of period-style advertisements to the upper deck body panels and also the dash panels.  The trucks and lifeguards were also repainted in the battleship grey colour that was used instead of black during the mid to late 1930s.  The controllers and other electrical equipment were also overhauled at the same time.  Its overhaul has taken longer on account of the disruption caused by the coronavirus pandemic, but the tramcar returned to operational service in 2021. 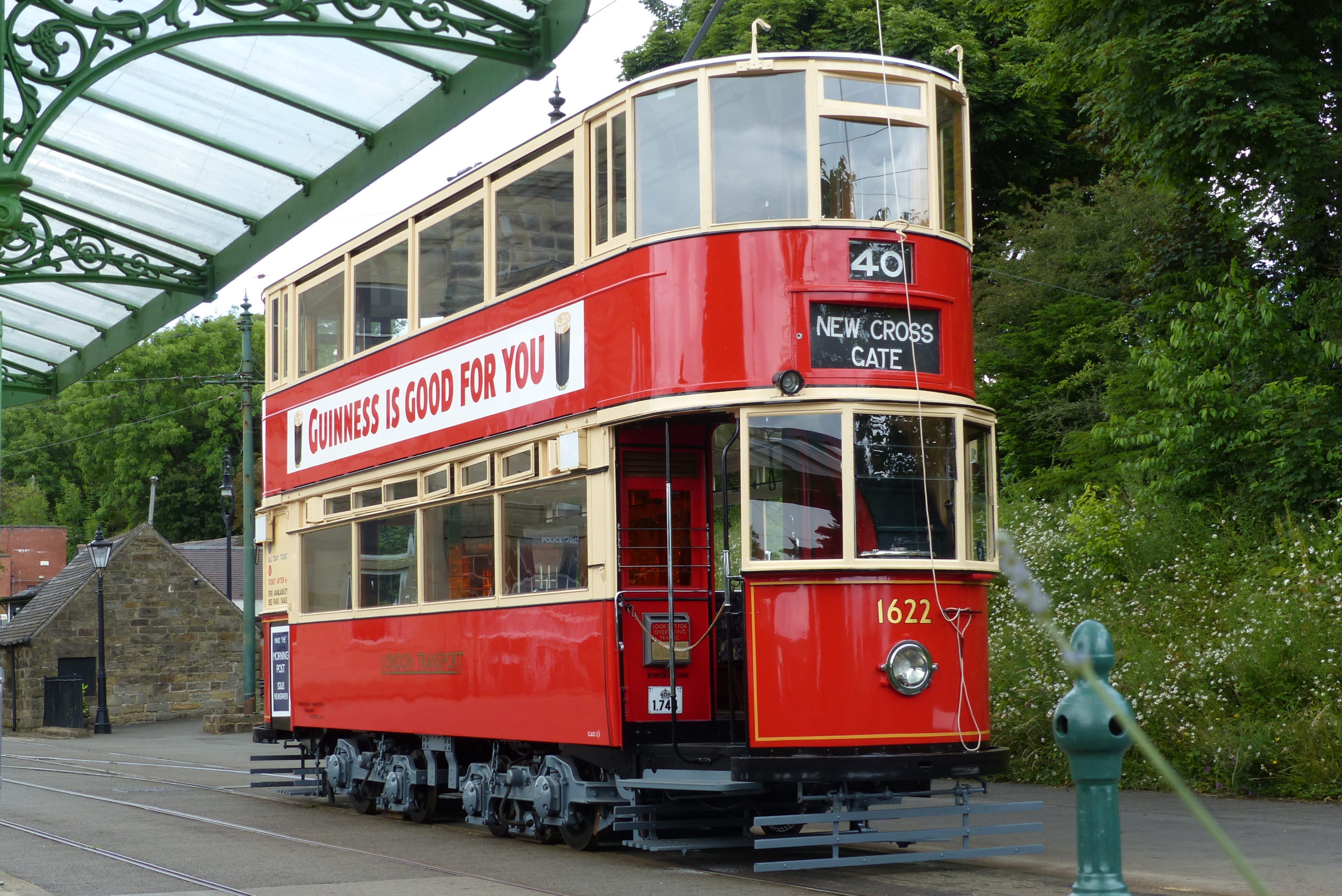 Although equipped with a top cover from new, the tram was ‘Pullmanised’ in 1928, which involved the addition of platform vestibules and more comfortable seating.
150 members of the class – though not 1622 – were further modernised (or ‘rehabilitated’) in the 1930s, which involved renewal of the interior.

Withdrawn from regular service in 1940 and assigned to the ‘reserve fleet’ for the duration of the war but never returned to ‘active service’.

Both decks were initially sold on to a caravan site on Hayling Island after which the lower deck ended up in an orchard in Liss, Hants, for many years. Discovered by a hiker in 1969 and transported by crane and lorry to London in 1979. An upper deck discovered not too far away (at Meonstoke in Hampshire) provided a template for a replacement to be constructed at Crich.
The tram was restored to depict a ‘rehabilitated’ E/1 tramcar with a refurbished interior, even though 1622 was never modernised in this way.

Extended restoration process undertaken in part by the London County Council Tramways Trust (lower body) and in part by the TMS at Crich (upper body, trucks and final assembly) between 1994 and 1997. The trucks came from a Leeds Feltham tram (no. 517) Neither bogies nor motors are historically accurate for this type of tramcar.

Current status
Restored in operational condition and currently commissioned for service as part of the operational fleet after a recent overhaul.
Date started operating at Crich
1997. Has operated in 19 seasons, most recently in 2021.
Total mileage covered at Crich
11,147
Current location
Depots
Future plans