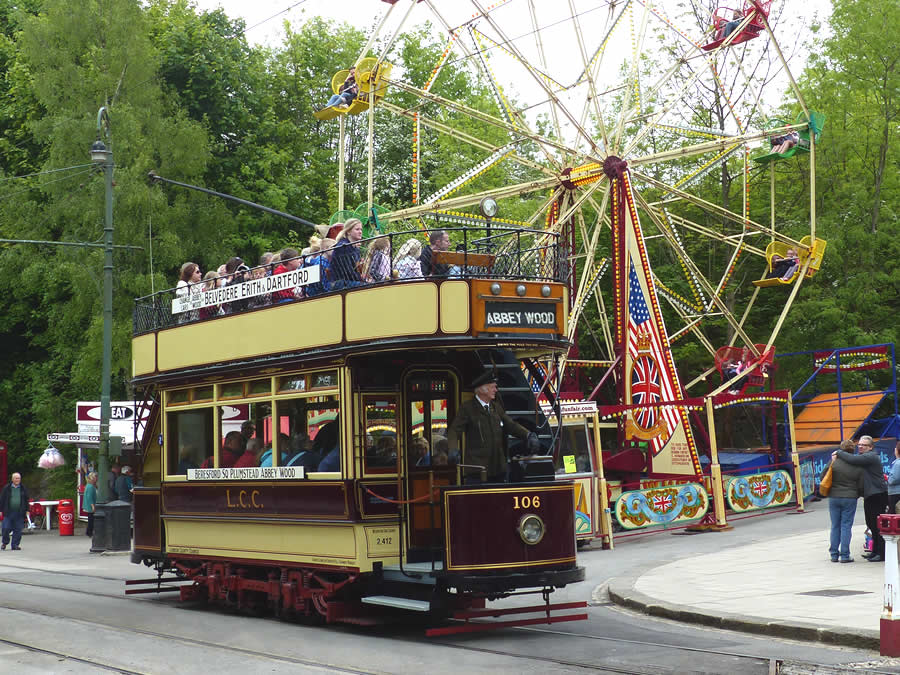 106 is a London County Council “B” class tramcar dating back to 1903 and it represents the typical standard four-wheel open-topped design that was built by established manufacturer Dick-Kerr during the early electric era. This type of tramcar was a standard ‘off-the-peg’ product (known as the ‘Preston’ design) and was supplied to operators all over the country including Leicester, whose number 76 would also have looked remarkably similar when first delivered. Photo courtesy of LCCTT collection. 106 on High Street, Lewisham. Date unknown but appears to have been taken between 1906 and 1910.

During its early years 106 obtained its power from an underground conduit system by means of a ‘plough’ that picked up the current from an additional slot rail rather than an overhead power-line.

Like the rest of its class, No. 106 was subjected to a number of modifications in the years following its introduction. One of the earliest – on the orders of the Metropolitan police – involved the replacement of the original type of staircase, known as ‘reversed’ stairs, with a type known as a ‘direct’ staircase. One of the problems with the original design (which can still be seen on Leicester 76) is that the staircase almost completely obscured the driver’s nearside rearward vision, which made it very difficult to see anything that might be approaching from behind on that side.

LCC 82, which was a Class A bogie tram capable of shifting more passengers than the shortened Class B trams. Seen at Clapham Common Cross circa 1904.  Photo courtesy of Crich TMS photo archive.

Shortly afterwards the entire class of trams was fully enclosed by equipping the top decks with covers. This left only the driver to be exposed to the elements on the still-open vestibules. Even with these modifications, the trams still had a number of shortcomings as they were too small to handle large London crowds, which meant that they tended to be confined to quieter routes. They also suffered from various structural weaknesses. Photo courtesy of LCCTT. 106 in Lewisham.

Consequently, a number of the class were sold off in 1917-18 to a variety of other operators that were experiencing war-time tramcar shortages (some going to Bexley, while others went as far afield as Newport, Sheffield, Rotherham and Southampton). The remainder were largely relegated to peak-hour services only and the last of the class ran in 1925. A few were retained to serve as stores wagons or, as in 106’s case, converted into snow brooms, which entailed the removal of the top deck and raising of the lower single deck above the truck by means of wooden beams in order to accommodate the large revolving broom under the platform ends. A long trolley pole was also fitted during the conversion process to enable the car to operate on parts of the system with overhead wiring.

The need for snow brooms was particularly acute on tramways where power was supplied by means of a conduit system since the slot rails easily became clogged with snow during periods of severe weather. Despite its lowly status as one of the fleet’s extensive array of works cars, this change of role proved to be its salvation, since 106 (by now renumbered as 022) became one of the last of London’s works cars by 1952 and, indeed, was the sole survivor of its type. Consequently, it was selected as an example of an open-topped car, when London Transport Executive decided in 1951 to preserve examples of each of the capital’s principal types of electric tramcar.

The car was placed in storage in London for a time and at one stage was housed in the British Transport Museum at Clapham. It was presented to the London County Council Tramways Trust and the process of restoration, which commenced in 1971, was completed by 1983. A trolley mast was fitted at this time to enable the car to operate at Crich. On 15th May of that year LCC 106 was presented to the National Tramway Museum on the 80th anniversary of the opening of the LCC electric tramway.

While at Crich, the tram has covered over 20,000 miles in passenger service, though it was taken out of service for two years in 1999 to enable a major body overhaul to be carried out. In 2007, the tramcar was withdrawn as by this stage it needed a truck overhaul and a certain amount of bodywork repair. Following a generous offer by the London County Council Tramways Trust to fund the overhaul, it entered the workshops in 2013 and returned to passenger service in June 2015. 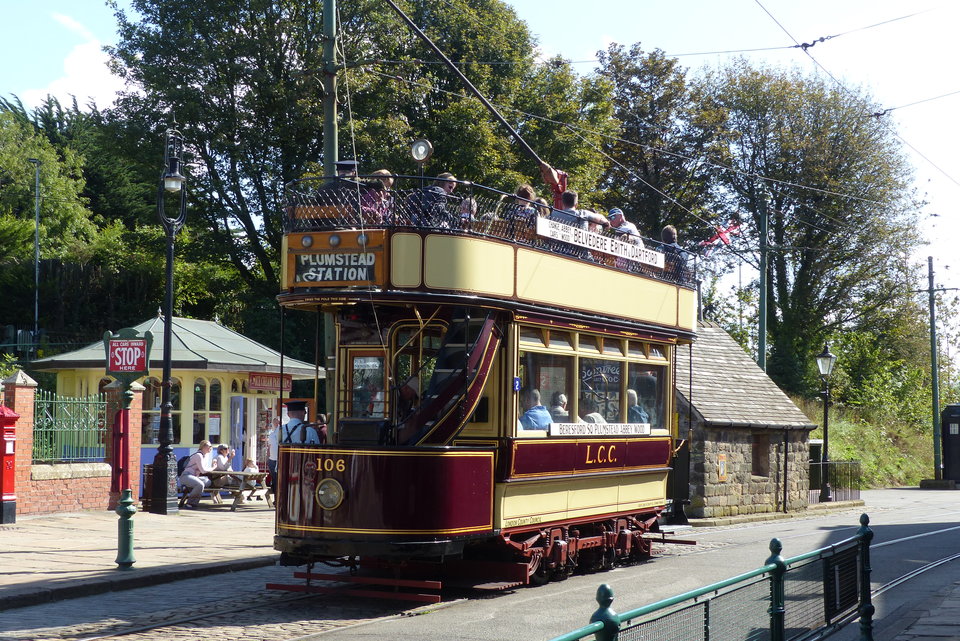 In July 2016, the tramcar spent a weekend at the East Anglia Transport Museum at Clarlton Colville where it participated in their London Event with a number of other London trams, buses and trolleybuses.

By 1906; the original reverse stairs had been replaced with direct stairs and the car had been fitted with a fully enclosed top cover.

Converted into snow broom in 1925 which involved removal of top deck, raising of lower deck to accommodate revolving brooms and the addition of a long trolley pole. Renumbered as 022. Continued in service as a works car until 1952

Earmarked for preservation in 1951 and initially placed in storage for preservation (including a period at the British Transport Museum in Clapham). The process of restoration commenced in 1971 and was completed in 1983.

Current status
Restored in operational condition. Commissioned for service as part of the operational fleet during the current season.
Date started operating at Crich
1983. Has operated in 27 seasons, most recently in 2019.
Total mileage covered at Crich
24,462. It also briefly visited the East Anglia Transport Museum in 2016.
Current location
Depots