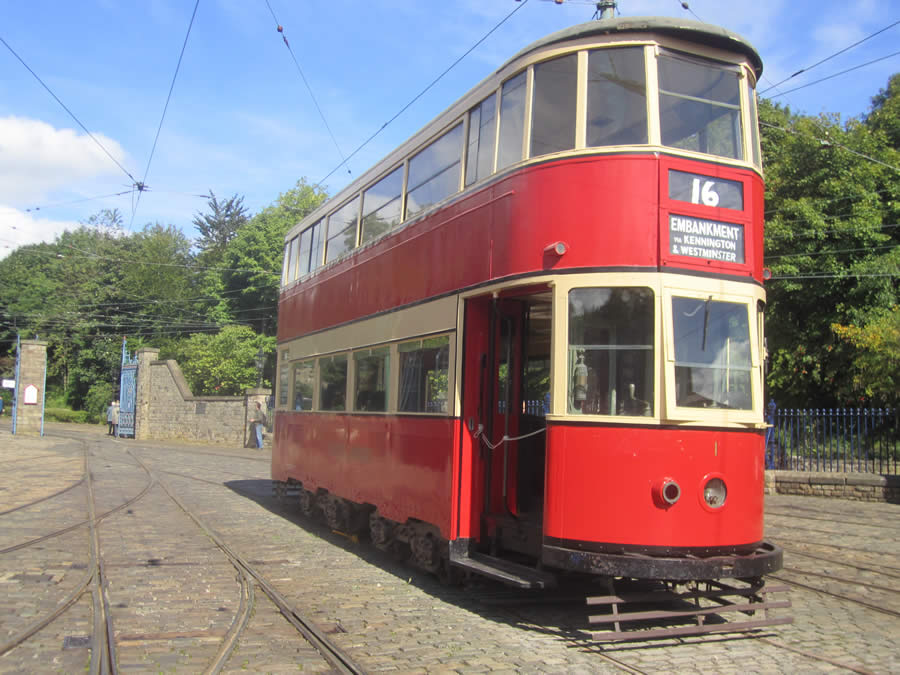 By the time London County Council no. 1 came into service in 1932, Britain’s tramways were at a crossroads. Faced with growing traffic congestion, increased competition from motor buses and ageing infrastructure, many first generation tramways had already closed and been replaced by either trolleybuses or motor buses. Not all tramways were prepared to give up without a fight, however, and other London operators had responded to the challenge by introducing more modern and efficient tramcars. Not to be outdone, the London County Council decided to not only upgrade its existing fleet but also invest in a new experimental tramcar of much more advanced design.

LCC1 (as it was then), boasted a number of innovations including all-metal body and four-motor/equal-wheel bogies, an all-on-one-level lower deck and air-operated brakes and folding platform doors. In an attempt to encourage off-peak tram-riding while retaining additional capacity for rush-hour services, the tram combined superior upholstery, improved heating, recessed lighting and brighter interiors with additional space for standing passengers. Despite its weight – at 21 tons, the tramcar is thought to be the heaviest in Britain – it managed a creditable acceleration rate of 3.5 feet per second and a maximum speed of 30 mph. The tram car was given the number 1 and originally sported a distinctive blue and ivory livery with stream-lined effect, which gave rise to its nickname of ‘Bluebird’.

In spite of these considerable improvements, the car did not lay the foundations for a modernised fleet of LCC trams for, shortly after its introduction, London’s various transport undertakings were unified under a single London Passenger Transport Board, which soon embarked on a policy of systematically replacing trams with trolleybuses. 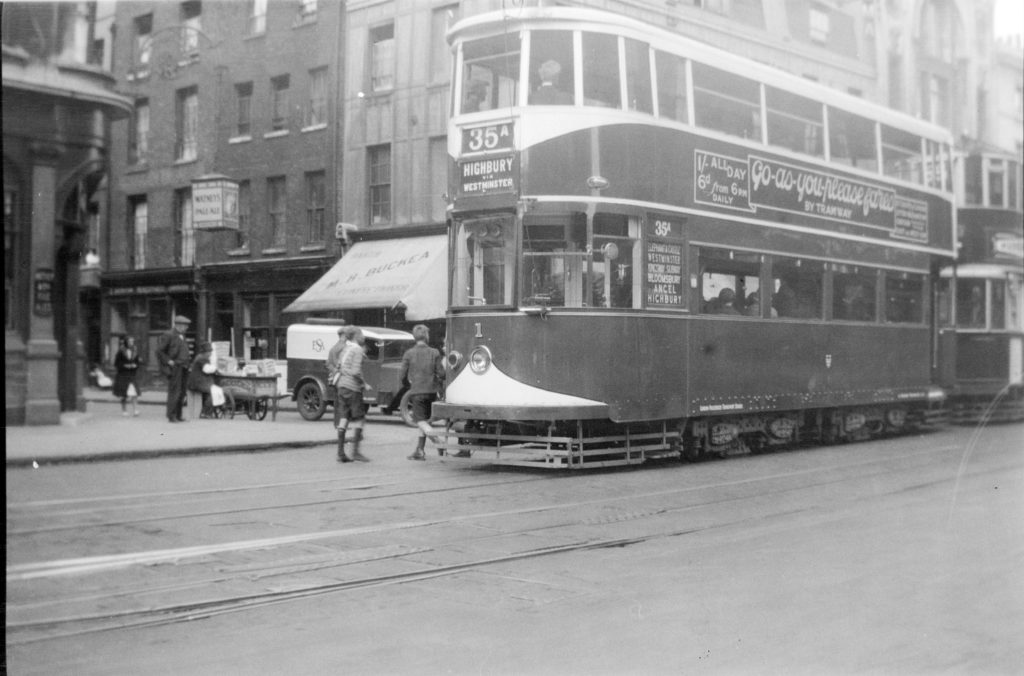 No. 1 in its original ‘Bluebird’ livery. Photo courtesy of Crich TMS photo archive.

However, it is credited with influencing the design of tramcars both elsewhere in the UK and also abroad, including cities as far afield as Bombay (now known as Mumbai).

At Liverpool, for example, the City Electrical Engineer, Percy Robinson had been impressed by LCC No 1 and when he was put in charge of the Tramways Department following the death of Manager Priestly he began building 36 cars very similar in design to No 1 although the Liverpool cars had cased-in 120 degree reversed stairs.

Known as ‘Cabin’ or ‘Robinson’ cars, the first example entered service in late 1933 painted in a streamline livery similar to No 1. These were followed by 50 ‘Marks Bogies’ the first of which entered service in early 1935. These were very similar to the ‘Cabin’ cars but incorporated several changes made by the new Manager, WG Marks. They did not carry the streamline livery. In its new guise as London Transport 1, the tramcar mainly operated from Holloway depot and was often seen on subway services 33 and 35, particularly during rush-hours. As a non-standard air-braked car, No. 1 could only be driven by one of two suitably trained crews and this resulted in a reduction in its use following the death of one of its regular drivers in 1937. It was repainted in the standard London Transport red and cream livery in the same year and was transferred south of the river to Streatham (Telford Avenue) depot in 1938.

Just after the outbreak of war, it was initially placed in store behind sand bags in Telford Avenue depot where it served as an air raid shelter. By 1942, however, a shortage of operational tramcars resulted in a return to service, notably for rush-hour workings on the Streatham route.

Faced with the imminent closure of the remaining network in 1952, No. 1 enjoyed a new lease of life during its final years in London as a charter tram on a series of enthusiasts’ tours that took in as much of the surviving system as possible. Indeed, it enjoys a rather special place in the history of tramway enthusiasts, having been chosen as the preferred vehicle for the first ever Light Railway Transport League (LRTL) tour on 15 May 1938.

This particular tram-ride – from Waltham Cross to Purley and back, a distance of 28 miles each way – was the longest direct journey ever made by a tramcar in London.  It was also on one of these tours that the idea of establishing an independent tramway museum was first mooted.

Shortly before the closure took place, LCC1 was one of a number of ex-London tramcars that were sold to Leeds in 1951 to help replenish that city’s war-ravaged fleet of tramcars. The circumstances regarding its sale were somewhat unusual, however, as the original sale agreement related solely to a batch of 92 soon-to-be redundant Feltham tramcars (similar to MET 331 in the collection). Before the sale was completed, however, a fire in a London depot partly destroyed two of the Leeds-bound tramcars. So LCC1 was drafted in as a substitute and sent to Leeds, where it was painted in the Leeds red and white livery and renumbered 301. It entered service in December 1951, though its inaugural journey was marred by a minor fire! Since it was less than 20 years old by this stage and had not been very heavily used, it is perhaps not surprising that it remained in service until September 1957, just a couple of years before the system in Leeds also closed down in 1959. As Leeds 301, it was initially allocated to the Chapeltown depot (serving routes 1, 2 and 3) before being transferred to Swinegate in 1955.

Following its final withdrawal in September 1957, the tramcar was donated by Leeds City Council to the British Transport Museum at Clapham, which in turn passed it on to Crich in 1973.

Although it is far from being a ‘conventional’ tramcar, for many years LT 1 was displayed in its ‘conserved’ state, which typified the condition that many trams were in shortly after being taken out of service. However, the tramcar is currently coming to the end of a thorough restoration programme in the museum workshops that will see it return to operational service in its original livery. 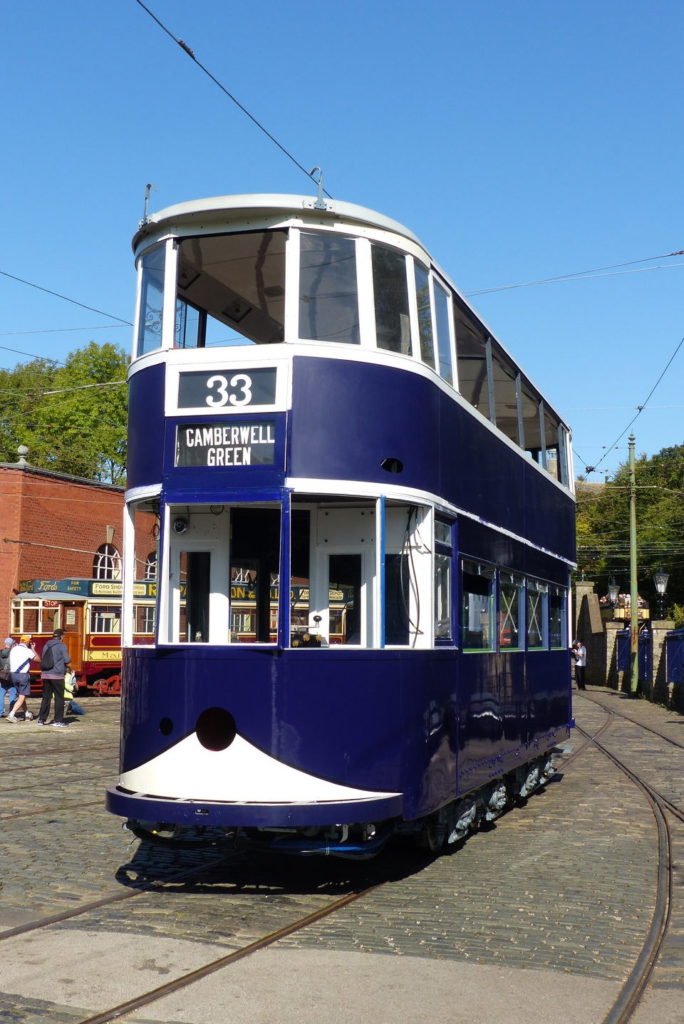 Progress with the restoration was well advanced by the time of the museum’s 60th anniversary celebrations on 21st September, 2019. Photo: Jim Dignan

The completion of this major, ambitious – and expensive – project was severely delayed as a result of the Covid pandemic but hopefully Bluebird will take wing once more at Crich during the current season.  On Friday 22nd April 2022, an important milestone in the tram’s restoration project was reached when it emerged under its own power as part of its initial traction test. 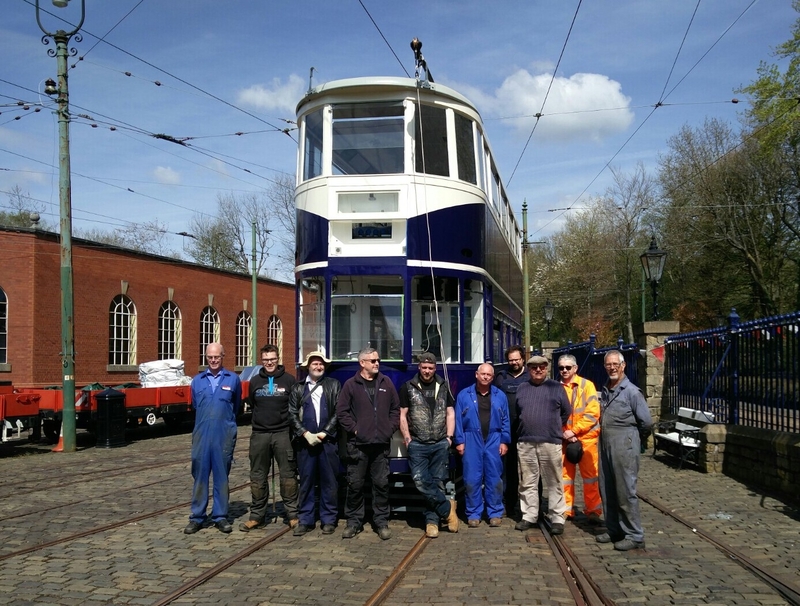 Bluebird taking wing for the first time as part of its restoration, pictured with members of the team who have worked on the tram. Photographed on 22nd April 2022 by Jim Dignan

Plough carrier removed and replacement of trolley poles with bow collector in 1951 and changes to air brake system (different motorman’s valve) plus removal of number boxes. Some cutting away of skirting (to give greater clearances on curves) while in Leeds and some mechanical components are missing.

Placed in store in 1939 until it was recalled to service in 1942. Withdrawn from London service on 7th April 1951. Final withdrawal from passenger service in Leeds on 29th September 1957.

Sold to Leeds in 1951, where it was repainted in Leeds (dark red & cream) livery and renumbered as 301. It entered service in Leeds on 1st December 1951.
Donated to the British Transport Museum at Clapham in September 1957. Transferred to Crich in 1973.

Repainted in London Transport colours after moving to Crich in 1973. In September 2012, the London County Council Tramways Trust launched a a fund-raising appeal to meet the cost of restoring the tram to its original operational condition as LCC no. 1 ‘Bluebird’. The tramcar was moved to the workshop to begin the lengthy restoration process on 14th June 2014.
The project is now at an advanced stage as the tramcar is now being reassembled though much work remains to be done before it is completed.

The restoration programme should result in the return of this iconic tramcar to operational service.