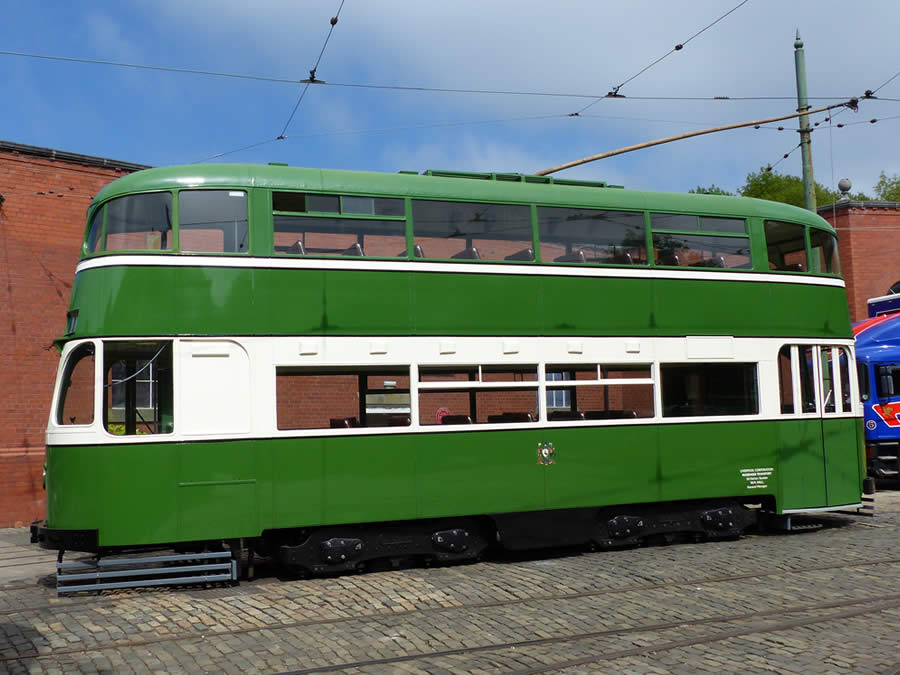 Liverpool was one of Britain’s first generation tramway ‘giants’, being the third largest system in England with 97 miles routes by the end of the war and a fleet of some 744 tramcars, of which a significant number had been built in the 1930s. The city also had 27 miles of segregated tracks, the first section of which opened in 1914 and the last in 1944. Most of these ‘grass tracks’ were built in the centre of broad dual carriageways and were designed as an integral part of a series of new suburban housing estates which enabled the Corporation to move thousands of residents from densely-packed inner-city ‘slums’.

In contrast with many other major British cities, Liverpool was actively investing in its tramway during the 1930s by building new routes and renewing its fleet with more modern cars. The performance of 12 double-decker bogie cars which entered service in 1931/2 radically transformed the public attitude towards the city’s trams as these 70-seat air brake cars were fast, comfortable and represented a clear departure from the rather conventional looking four wheel vehicles that had previously provided the backbone of the fleet.

Further groups of increasingly modern cars with state-of-the-art running gear were built on a production line basis at the Corporation’s Edge Lane works between 1933 and 1936. These were also painted in a striking livery of olive green and cream which quickly earned them the name ‘Green Goddesses’ after a popular film of the period. The bogie revolution culminated with the mass production of a fleet of 163 Streamline cars – known as the ‘Liners’ – which emerged from Edge Lane (at a rate of 14 tramcars in a single month when output reached its peak) during 1936/37. Number 869 was the second of these tramcars to be built, appearing together with 868 on the 11 June 1936 and operating from Prince Alfred Road depot. The last of Liverpool’s new trams were 100 ‘Baby Grands’ – a cheaper, four wheel version of the ‘Liners’ which were built between 1937-1942. During the second world war, Liverpool’s extensive and efficient tramway enabled the city’s heavy industry to continue functioning since it was relatively immune from the fuel shortages affecting other parts of the transport sector. Indeed, the tramway continued to expand with extensions to serve labour-intensive factories at Gillmoss and Kirkby.

After the war, however, the decision was taken to replace the by-now run-down system with buses, the first abandonments occurring in 1948. Number 869 continued in service for a while and was eventually given a much-needed overhaul during the early 1950s, which also involved a number of minor modifications.

As buses took over more routes increasing numbers of cars were withdrawn, most of them destined for the scrap-yard. This gave Glasgow Corporation the opportunity to purchase (for £500 each) 46 of the still relatively modern ‘Liners’ to replace some of its own life-expired cars.

Having moved north in May 1954, 869 was put in store before being re-gauged, overhauled, modified and repainted at Coplawhill works. Entering service as 1055 on 2 November 1955, this particular tramcar was assigned to Parkhead depot and continued to operate in its new home for another five years, but by 1960 it was one of only a handful of ex-Liverpool cars still in use.

On a bitterly cold 21 February 1960 it was hired by the Liverpool University Public Transport Society (LUPTS) for a marathon ‘farewell’ tour of the Glasgow system. It was during the course of this tour that the final cash was raised that allowed for the purchase of the car for £50 plus £31 worth of spare parts. The bulk of the funding came from donations to the LUPTS, the biggest single contribution being £5.

When the University informed the student group that they were not allowed to raise funds for this purpose, the Merseyside Tramway Preservation Society was formed to oversee the long-term future of the tram. It was during this period that Guinness Brewery agreed to pay £130 to move the tram from Glasgow. After being withdrawn from service in June 1960 and stored at Dalmarnock depot, 1055 was driven across the city early on the morning of Monday 8 June 1960 to Coplawhill where it was loaded (minus its bogies) onto a lorry for the journey south to an open site at Parkside Leeds. Eventually, the tram returned to Green Lane depot in Liverpool where the MTPS expended a considerable amount of time and effort restoring it in the period up to 1979, enabling it to be brought to Crich on 4th October for what was initially intended to be a three-year loan period.

Unfortunately a more detailed inspection following its move disclosed a number of remaining problems that would need to be rectified if the vehicle was to return to operational condition. These included major defects in the bogies that were caused by design faults, bodywork problems and unserviceable seat covering, the rectification of which would require considerable additional time and expense.

After a period of protracted negotiations it was eventually agreed to transfer ownership of the tram to the Tramway Museum Society. Although some remedial bodywork was undertaken during the mid-1980s, however, it was not until May 1990 that 869 entered the workshops for the major repair work to its bogie bolsters, which involved a complete redesign and rebuilding of some its components. At long last the tram was eventually able to enter service at Crich in July 1993, since when it has formed part of the operational fleet in most years. 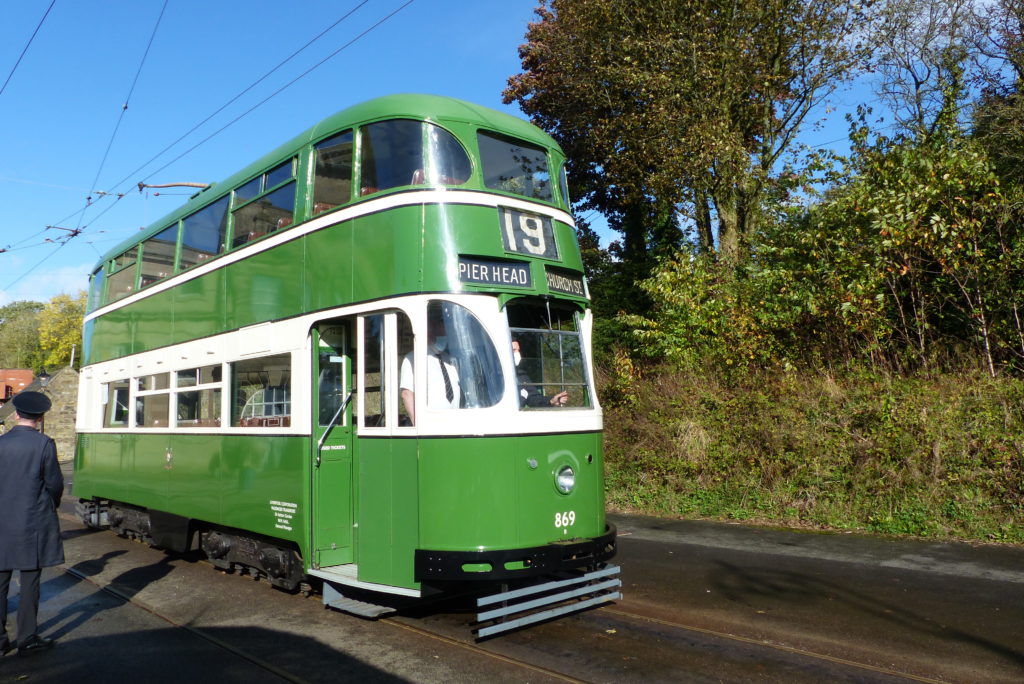 In September 2015 the tramcar re-entered service following a subsequent extensive overhaul. Coincidentally, this event occurred just a few days after the Merseyside Tramway Preservation Society had launched another streamliner – Baby Grand 245 – into service at the Wirral Heritage Tramway following an extensive restoration programme.

When rehabilitated in the early 1950s the original non-slip floor was replaced with wooden slats. On moving to Glasgow it was fitted with bow collector, new lifeguards and trafficator lights. The fenders it had been equipped with in Liverpool were removed.

Initially purchased by Liverpool University Public Transport Society, ownership then passed to the Merseyside Tramway Preservation Society. After a series of moves (to Leeds, Crich and Liverpool) an initial restoration was undertaken within Liverpool’s Green Lane depot.

Following the discovery of further serious defects ownership passed to the TMS who eventually completed the major task of restoring the car to operational condition in January 1993.

Current status
Restored in operational condition. Commissioned for service as part of the operational fleet during the current season.
Date started operating at Crich
1993. Has operated in 24 seasons, most recently in 2019.
Total mileage covered at Crich
15,999
Current location
Depots