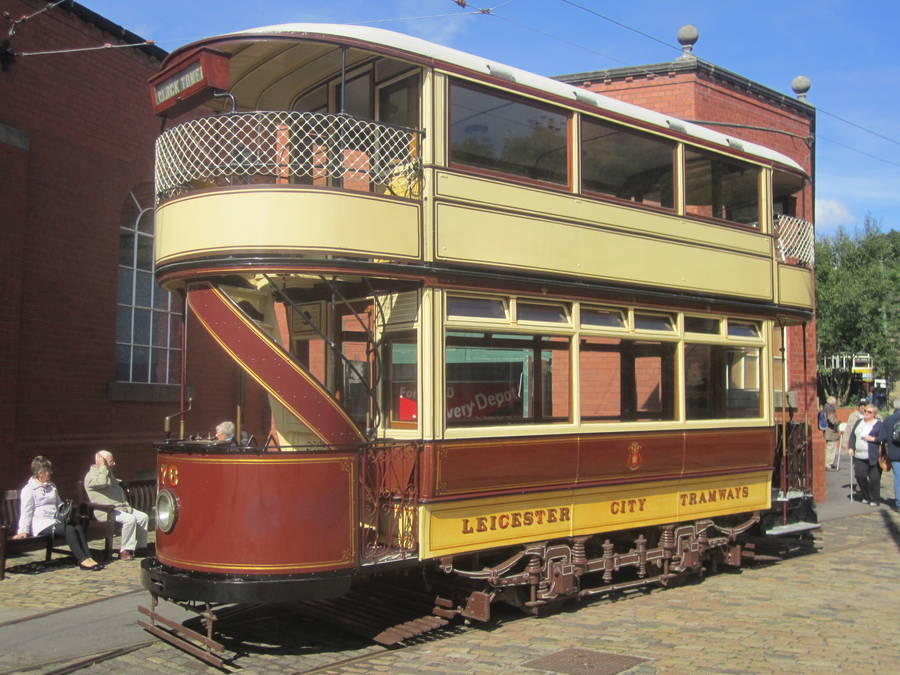 Leicester had a compact, medium-sized tramway and was renowned for having one of the most complicated tramway junctions in the country.  Centred on the area surrounding the Haymarket Memorial Clock Tower, no fewer than six roads converged at this point, posing a serious challenge for the tramway engineers who were responsible for laying the tramlines in 1903.  The tramway itself was well-patronised, however, and in 1919, its peak year, 62.4 million passengers were carried on 160 tramcars. Leicester 76 was originally built in 1904 as an open-topped tram by the Preston-based Electric Railway and Carriage Company.  An interesting safety feature on this type of tramcar was the use of a “reversed” staircase in place of the ordinary outward facing type.  The problem with these was that as the tramcar moved off anyone climbing the stairs would be at risk of falling off backwards – and possibly into the road – unless they had a firm grasp of the hand-rail.  With a reversed staircase a passenger would be more likely to fall against the stairs themselves or the guard rail that would be positioned behind them.

The perennial problem facing early tram operators of lost revenue during adverse weather conditions was addressed in Leicester’s case by enclosing the upper saloon with a domed roof. A programme to modify the entire fleet in this way commenced in 1913, though balconies were still open at this stage. Further upgrading took place during the 1930s when the open platforms and balconies were fully enclosed. A couple of 76’s original design features are also of note as they highlight the contrast in attitudes and values over the intervening period since its introduction. The first might be thought of as a rather serious ‘design fault’, particularly in today’s health and safety conscious age, and involved the positioning of the ‘reversed stairs’, which completely obscured the driver’s vision over his left shoulder. This handicap was partially alleviated by incorporating a series of perforated holes in the vertical section of one of the steps through which the driver might be able to glimpse any approaching cyclist or other traffic coming up from behind on the ‘near’ side. However, the solution to one problem gave rise to another one since the glimpse of a passing lady’s ankle on the tram’s rear stairwell at the conductor’s end of the tram would almost certainly have offended the cultural sensitivities of the day. In order to solve this dilemma a further modification was incorporated, consisting of a ‘decency flap’ of metal, which could be pegged up in the ‘open’ position at the front end of the tram to afford slightly better visibility for the driver and down again in the ‘closed’ position at the rear end of the tram to afford a modicum of decorum for the benefit of female passengers. Determined to leave nothing to chance, the corporation tramway threatened conductors who omitted to close the decency flaps on ‘their’ stairwells with swingeing fines. Leicester 76 was withdrawn in July 1947 when the Fosse Road routes were converted to buses, just a couple of years before the final closure of the system, and the body was sold – minus controllers and truck – to become a cricket pavilion and changing rooms in the village of East Cowick, near Snaith in Yorkshire. 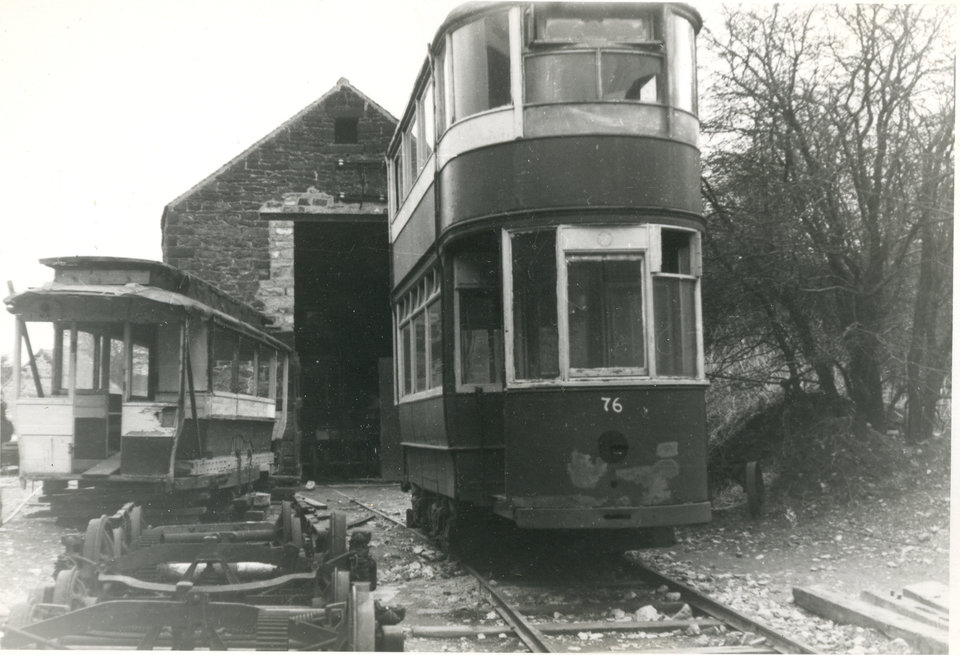 Before restoration – Leicester 76 was in a sorry state, emphasizing the scale of the challenge facing the volunteer restoration team! Photo: Howard Parkinson, date unknown

It was rescued from there, together with the lower deck of a sister car (number 99) in August 1960 and was the first car at Crich to undergo a major structural restoration, the objective being to restore the tram to a condition similar to the SHMD tram which had been adopted as the society’s emblem. This entailed not only the removal of vestibules and enclosed balconies to restore the car to its 1920s condition but also the replacement of parts of the car’s main structure and reinstatement of the ornamental embossed ceilings. Given the rudimentary facilities at Crich in those early days, this was no mean achievement, particularly as it was accomplished solely by volunteers. 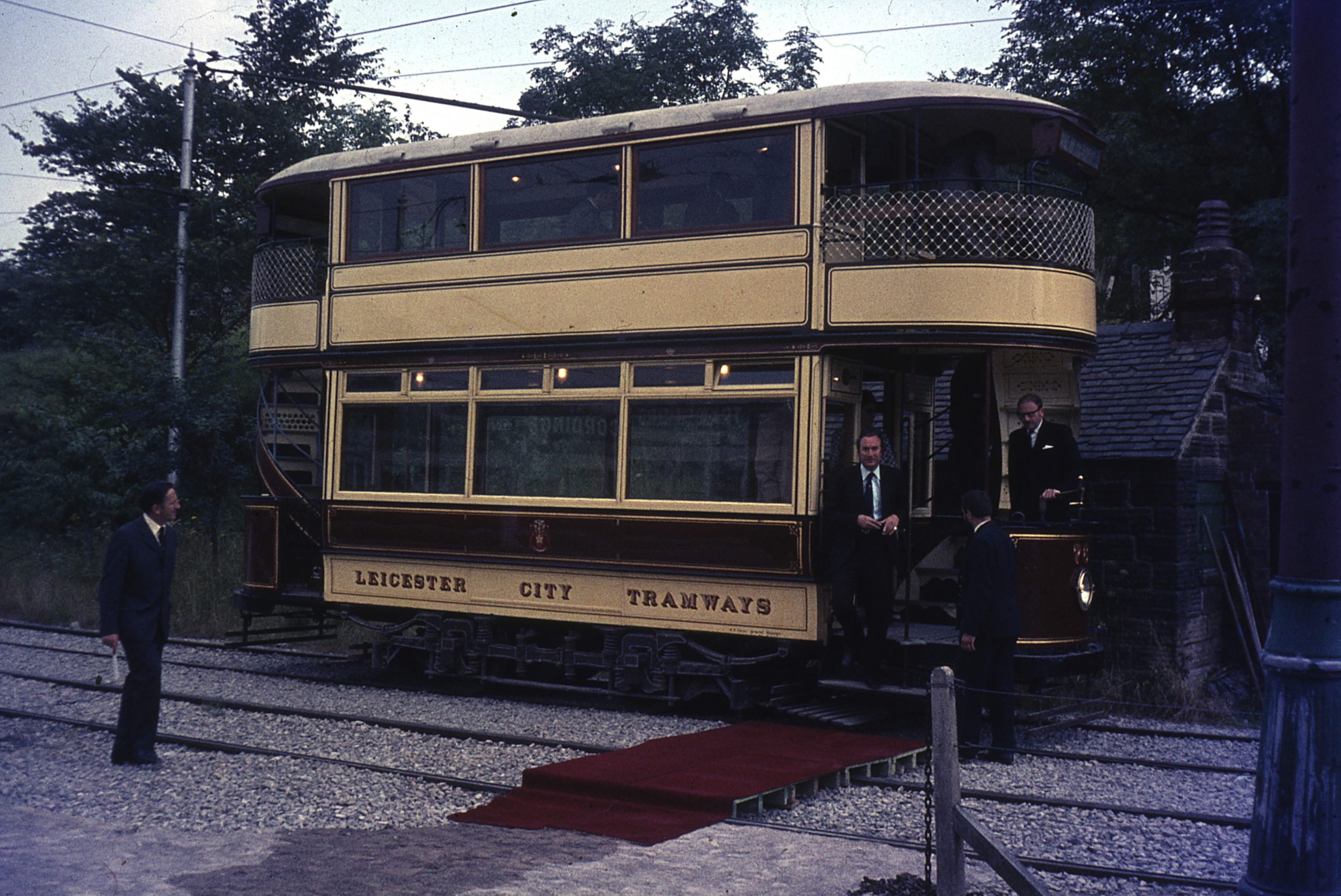 Leicester 76 pictured during a Royal Visit by the late Prince William, Duke of Gloucester, on a visit to Crich on 14th August 1972  Photo: Richard Lomas.

Some idea of the primitive working conditions and challenges facing the early volunteers at Crich during the restoration of Leicester 76 (and other tramcars) can be gleaned from a British Pathé newsreel – part of which (the second half) was filmed at Crich in 1964 – by following the link to: http://www.britishpathe.com/video/trams-and-tram-museum/query/tram 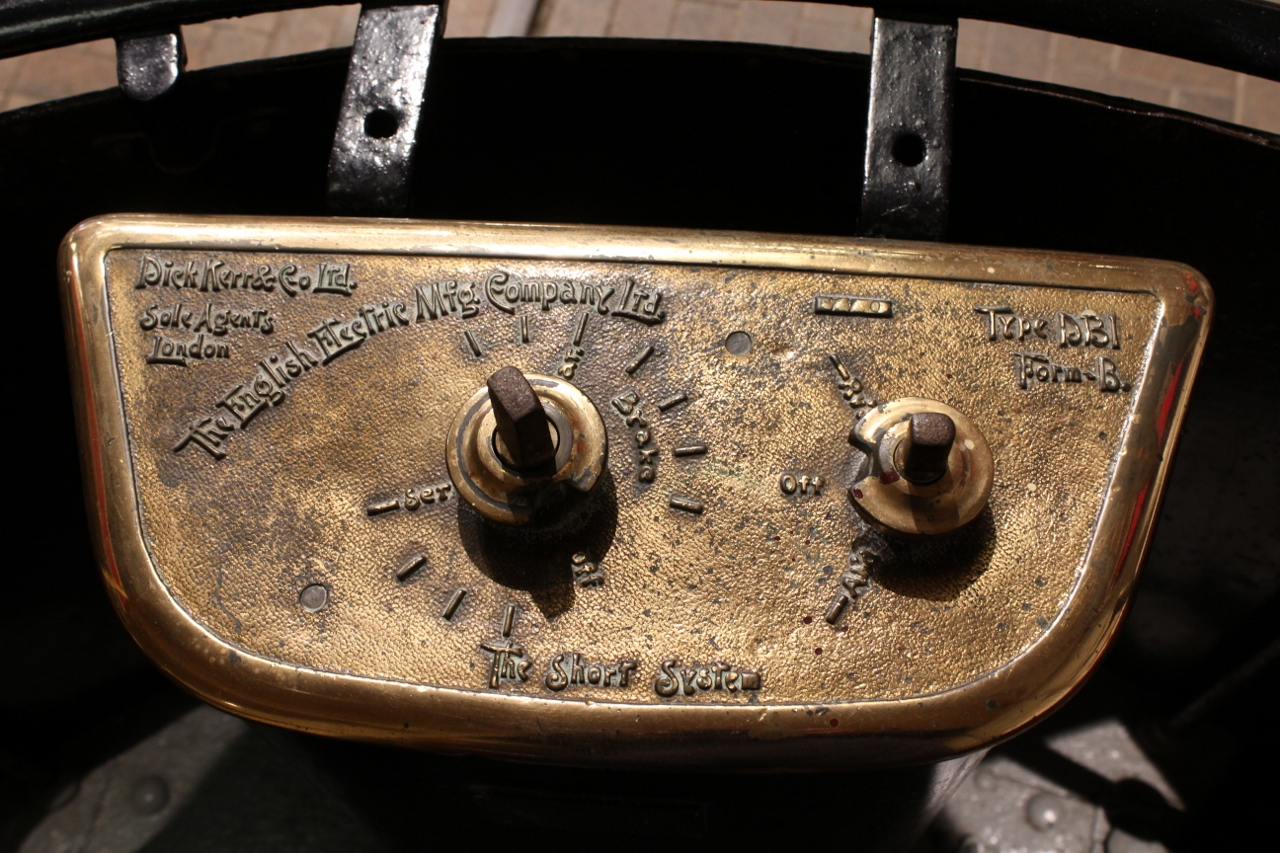 Top of the controller on Leicester 76. Photo: Paul Abell

The newly restored tram did enjoy a brief spell in passenger service for a limited period in the early 1970s (1973-5 inclusive), until the discovery of a major structural defect brought her operational duties to a close. Since then, Leicester 76 has featured very prominently as a static exhibit firstly in the ‘Trade Exhibition’ display and more recently in the ‘Century of Trams’ display. 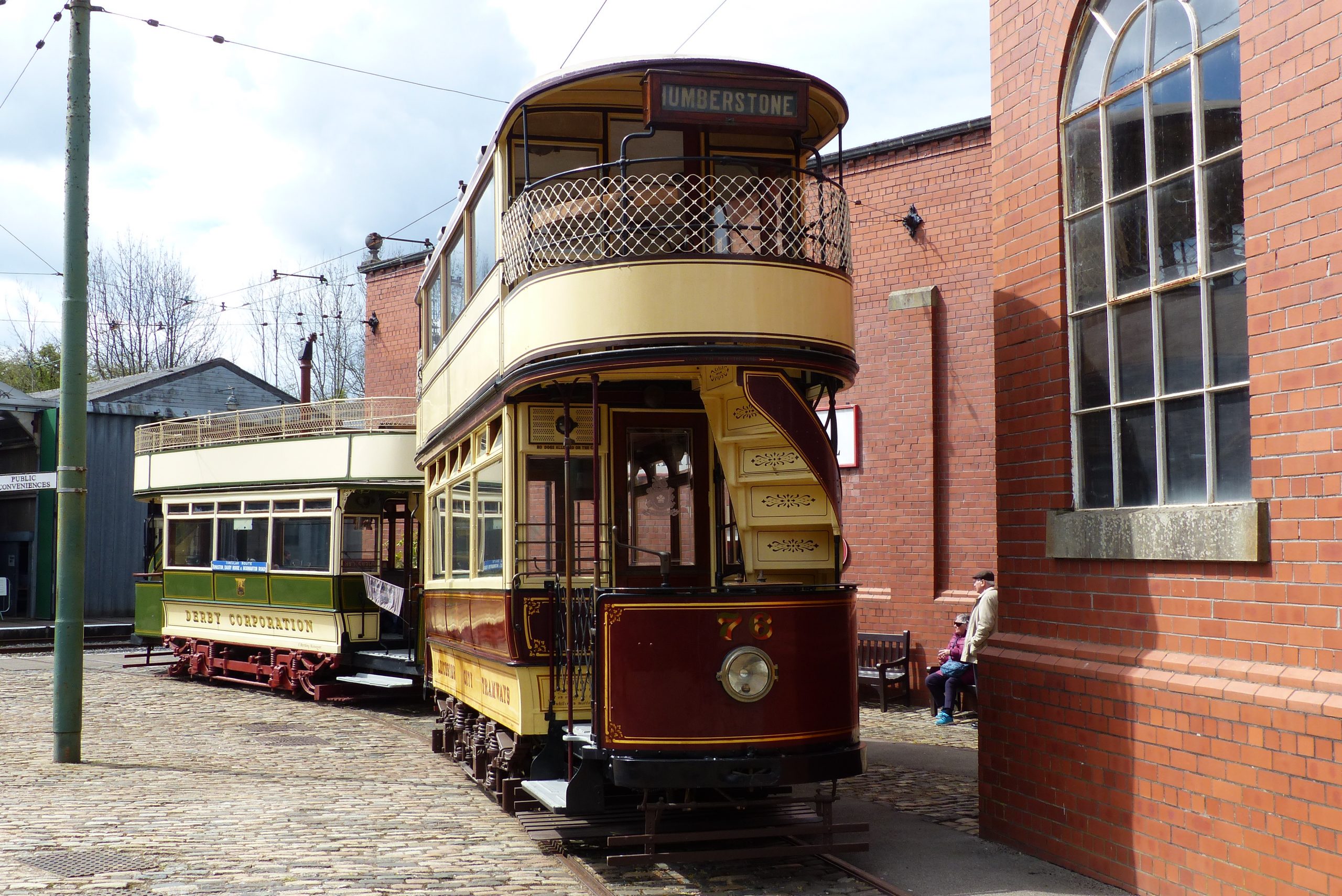 Body sold (minus controllers and truck) to become a cricket pavilion and changing rooms in East Cowick, near Snaith, Yorkshire.

Current status
Restored (though no longer in operational condition) and on display
Date started operating at Crich
1973. Has operated in 3 seasons, most recently in 1975.
Total mileage covered at Crich
658
Current location
Exhibition Hall