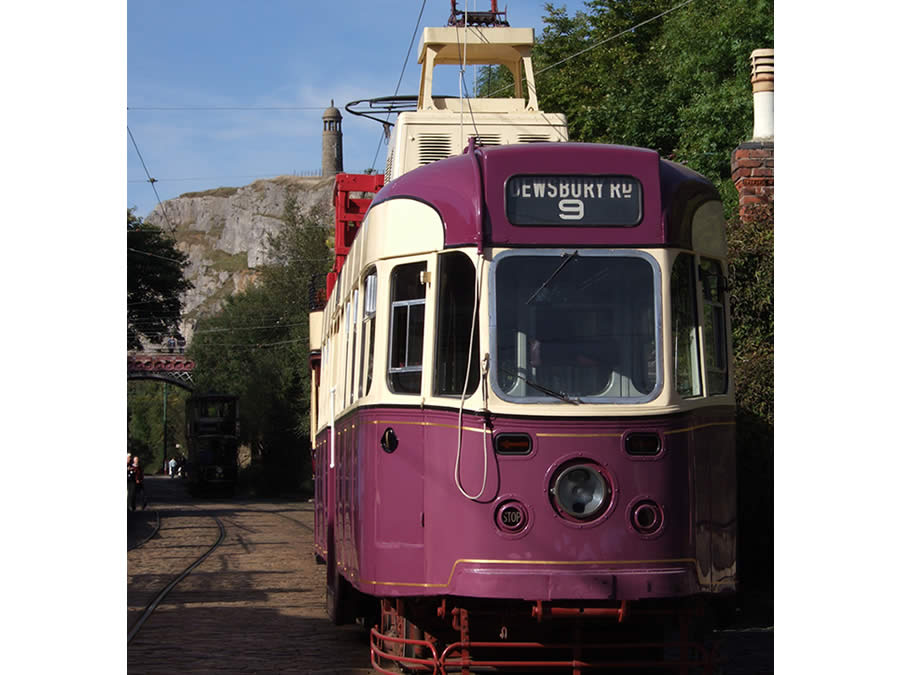 Leeds 602 was one of two prototype trams that were built in 1953 at a time when serious thought was being given to the development of a new tram subway system serving Leeds city centre as a way of avoiding the severe traffic congestion that it already suffered from. If the ambitious project had been completed, it would have seen most of Leeds’s extensive fleet of ageing double-deck trams being replaced by a new fleet of 200 continental-style single-deckers like 602 at a cost of £2 million. The design of the tram was influenced in part by American-style PCC-type single deck tramcars then operating in Belgium and the Netherlands (see Hague 1147 for an example); in part by design work that had been undertaken in Glasgow by the tramway manager (A.B. Findlay) who was later to move to Leeds (1949-60); and in part by similar contemporary developments in Blackpool.

The tram also bears more than a passing resemblance to an experimental tramcar – Leeds 600, also in the National Tramway Museum collection – which was purchased from Sunderland towards the end of the war and which underwent an extensive rebuild that overlapped in part with the design and construction phase for 602. 602’s tapered ends were intended to provide increased clearances on tight curves while its continental-style central entrances were combined with reduced seating capacity to enable more standing passengers to be accommodated and reduced loading times with a view to improving operating schedules by 25%.

The radical changes that 602 incorporated were not simply confined to the bodywork, however, for its innovative features also extended to its electrical components. Indeed, it could fairly be described as Britain’s first fully electric tramcar in the sense that even the braking mechanism was operated electrically instead of using compressed air or hydraulic brakes.

Rheostatic brakes slowed the car to 5 mph before electrically operated shaft brakes brought it to a standstill. Emergency braking was achieved with the aid of four large magnetic track brakes that were powered by the car’s own batteries and thus were capable of operating even in the event of a power supply failure.

One of its most innovate features, however, was a new form of control mechanism (Variable Automatic Multi-notch Braking and Acceleration Control system, or VAMBAC for short), which provided much smoother – and faster – acceleration, enabling it to achieve a speed of 30 mph in just 17 seconds, compared with a more pedestrian 27 seconds for even the most modern bus of the era. Together with its more powerful motors, 602 was said to be capable of 50 mph but because it was subject to a legal restriction of 30 mph this was never put to the test. Even so, the tram was claimed to be capable of maintaining average speeds of 12 mph as opposed to the more usual 9 mph achieved by its predecessors.

Another distinctive feature of the tramcar is its louvred ventilation slots in the specially strengthened platform tower, the purpose of which was to keep the Vambac equipment cool. The order for these two highly unusual cars (though 601 was less technically advanced) was placed with Charles H Roe, a firm that had never built a tramcar before and that was better known as a manufacturer of bus bodies. Although construction began in November 1951, progress was slow and 602 was not completed until 16 February 1953. The tram owes its rather regal purple and cream livery to the fact that its introduction coincided with the QEII coronation in that year and free travel was offered on the first three days of service as a Coronation gesture for the benefit of Leeds passengers. 602 and its sister car were greeted with great acclaim and were heralded by the transport committee chairman as the fore-runners of a modern fleet of vehicles that would transform urban transport in the city.

Just a few weeks later, however, following a change of political composition at the recent council elections, this spirit of optimism instantly evaporated when the fateful decision was taken to abandon the tramway altogether. As for 602 itself, it also failed to live up to the high expectations that had greeted its arrival. For one thing, the Leeds travelling public seemed reluctant to embrace the metropolitan commuter ethos that restricted seated accommodated to just 34 passengers (17 in each saloon) while up to 36 additional travellers were expected to stand.

In addition, the tramcar suffered teething problems and had to be withdrawn from service for several weeks after experiencing braking problems and also difficulty with its innovative control mechanism. Further ignominy was to follow when, after about a year of ‘normal’ operation across various routes in the city, 602 and its two fellow prototypes (600 and 601) were consigned to a single, short and rather obscure route along two miles of congested urban streets (the number 25 from Swinegate to Hunslet). In the absence of any reserved track sections, they were unfortunately never able to demonstrate their true potential.

Although it may appear rather perverse to have assigned such state-of-the art tramcars to this backwater route, there may have been sound operational reasons for the decision since it would have been possible to operate this short route with a single roster. This would have reduced the number of crews that would need to have been trained to operate these relatively atypical tramcars..

There they stayed for the remainder of their all-too-brief working lives until they were prematurely withdrawn as ‘non-standard’ cars on 28 September 1957 and placed in storage pending complete closure of the Leeds tramway in November 1959. Although they were initially offered for sale on the second-hand market, neither Blackpool – Britain’s sole remaining tramway operator after the subsequent closure of Sheffield and Glasgow – nor any overseas operator expressed any interest in them and so, in the end, they were sold separately in April 1960 to private buyers. Number 602 was transported to Crich in May 1960 together with the third prototype Leeds tram (600) but sister car 601 met a sadder fate at the hands of vandals in September 1962 while in storage at a site in Leeds. Although 602 was still in running order on arrival at Crich and did run briefly in 1967 and 1972, it did require some restorative attention. In the early days of the museum when everything had to be done by volunteers in their spare time, this was a process that could take some time and, in 602’s case, lasted from 1963 to autumn 1972. Thereafter, the tram has operated in service somewhat intermittently at Crich, though generally for relatively brief intervals, and it was never used anything like as intensively as some of the other trams in the fleet. It ran in 1972, 1975-6, 1987-95 and 2003-6. It is currently displayed as a static exhibit in the Exhibition Hall and is most unlikely to be restored to operational condition in the foreseeable future following a decision in 2014 to conserve it in its current state.

A foot-operated ‘shaft-brake’ was installed in each cab prior to commissioning, to prevent ‘roll-back’ on gradients.
While still in service, two additional roof pods (subsequently removed) were installed, providing extra resistance for each motor pair.

28 September 1957 then placed in storage in Swinegate depot until the closure of the Leeds tramway in November 1959.

Moved to Crich in May 1960 and ran briefly in 1967 and again 1972 though it has only operated intermittently since then.

The tram underwent an extensive renovation between 1963 and 1972 and sustained a serious roof leak in the mid-1990s, which damaged some of the original ceiling mouldings.

In 2014 the decision was taken to conserve the tramcar in its present non-operational condition.