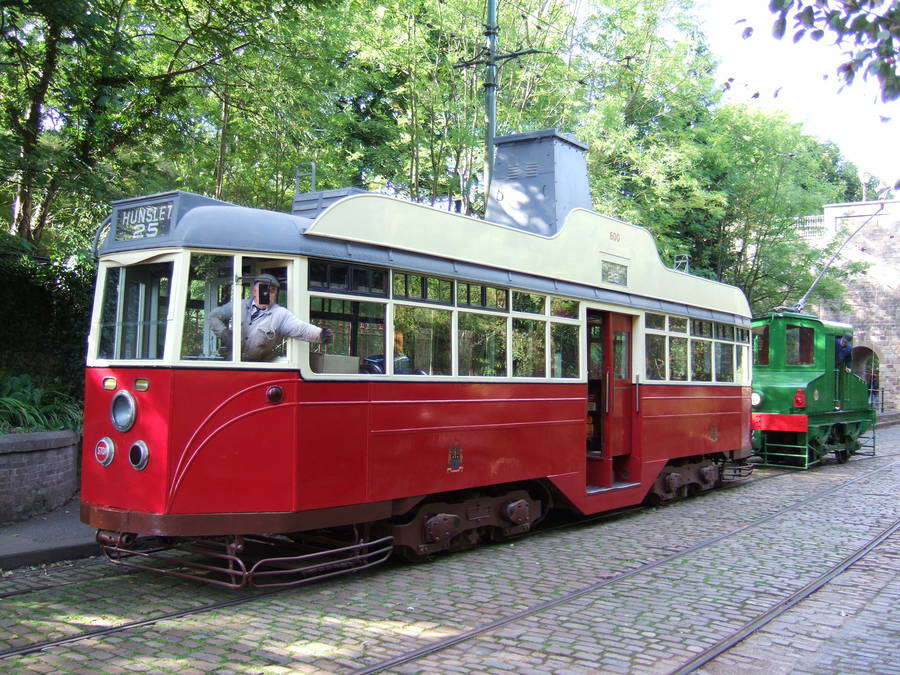 The story of Leeds 600 is an interesting saga of two rather unusual attempts in different parts of the country to extend the life of Britain’s first generation tramways at a time when many were being replaced by either motor buses or trolley buses. The first of these attempts, in Sunderland, was a resounding success; the second, in Leeds, could have re-written Britain’s tramway history but ended in a disappointing failure.

The tramcar began life as an experimental single-decker that was designed and commissioned by the manager of Sunderland Corporation tramways (Charles Hopkins) shortly after his appointment in 1929. He was faced with a familiar predicament in the form of an antiquated fleet of tramcars and a track-bed that was largely life-expired.

One of the worst affected routes (Villette Road) was a line served by single-deck cars because a low bridge precluded the use of double deckers. Indeed, conditions here were so bad that the tram service was suspended in August 1930 and replaced by buses, which resulted in an immediate increase in passenger usage. Mr Hopkins’ response was to use this as an opportunity to test whether a modernized tramcar might be capable of achieving similar or better results and a single-decker – Sunderland 85 – was commissioned from Brush for this purpose.

In its original guise the tram was quite unlike Leeds 600 since it had conventional platform entrances at each end of the tram, but it was equipped with low entrance steps and upholstered seating for 54 passengers.  It was also capable of a greatly improved level of performance with swift acceleration, a top speed of 35 mph and a very efficient braking system.

The tram quickly acquired the nickname ‘Covered Wagon’ after a popular song of the day and, being such an improvement on its dilapidated predecessors,soon proved to be extremely popular with Sunderland passengers. Following this successful trial, the track was relaid, not just on Villette Road but also across the rest of the Sunderland system and a modernisation programme was implemented that involved the acquisition of many new and second-hand tramcars together with the refurbishment of many of the original fleet.

Rather ironically, however, the tramcar that had single-handedly reversed the fortunes of the tramway proved a victim of its own success. For not long after the Villette Road track was re-laid, alterations to the low bridge enabled the route to be operated by double-deckers, which left 85 without an obvious role. Since it was effectively surplus to requirements the tram was placed in long-term storage at the start of the second world war and there it remained until November 1944, when it was sold to Leeds for £375. As with Sunderland a decade previously, Leeds tramway’s general manager (Vane Morland) was convinced that a rejuvenated tramway might hold the solution to the city’s already acute transport problems. A visit to the United States in 1936 had prompted a proposal to develop a subway system that would enable trams to operate underground and so avoid the congested streets in the city centre while benefiting from a network of feeder tram routes that would be serviced by modern single deck tramcars.

The onset of war put paid to any serious attempts to develop such a scheme, but in January 1944 the council established a Reconstruction Committee to consider post-war developments and Mr Morland produced a detailed proposal that was completed by the summer of 1945. By this stage the acquisition of Sunderland 85 provided an opportunity to put this vision to the test and, for a time at least, it looked as if tramway history might be about to repeat itself. Sadly, however, the scheme never materialised beyond the blueprint stage, largely because political support from the council was not forthcoming. So, after a few nocturnal trials Sunderland 85 (which was initially renumbered as Leeds 288) found itself redundant once more.

It did eventually enter service in its adopted city in August 1954, but only after a further period in storage punctuated by a spasmodic and protracted process of reconstruction that radically transformed both its appearance and performance. It was only at this point that it acquired the fleet number 600.

Externally, the most obvious changes were the tapered ends that gave improved clearances on tight curves together with an extended mid-section incorporating central entrance/exit doors that were intended to speed up the flow of passengers on and off the vehicle. The tram also acquired new bogies and more powerful motors that were intended to provide a high speed service, particularly on Leeds’s reserved track routes.

Internally, the main difference was an increase in capacity that was achieved by replacing the original 54 upholstered seats with just 17 in each of two separate saloons together with space for an additional 36 standing passengers making 70 in total. 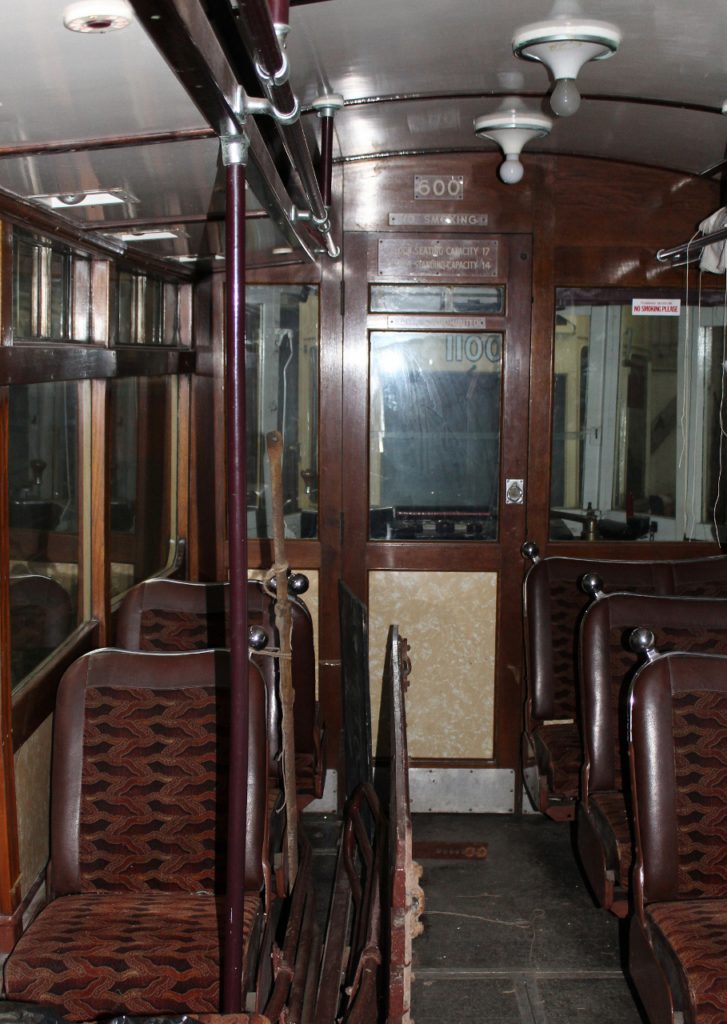 The reduction in seating space and increased standing room area can be clearly seen in this interior view of Leeds 600. Photo: Paul Abell.

Because of post-war restrictions, most of these modifications were accomplished by cannibalising parts from a variety of decommissioned tramcars from as far afield as Bradford, Glasgow, Liverpool, London, Manchester and Southampton. However, the overall effect was a much more modern-looking tramcar that more closely resembled contemporary tramcars that were appearing in a number of continental European cities, including Amsterdam and Zurich, than conventional British single-deck cars.

Despite the effort and ingenuity that had gone into its reconstruction, Leeds 600 was unable to reverse the fortunes of its adopted city’s tramways in the way it had succeeded in its native town. Indeed, by the time it eventually entered service the decision had already been taken some nine months previously to abandon Leeds’s tramway altogether.

As if to add insult to injury, Leeds 600 was not even particularly well-received by the travelling public in Leeds, who seemed to take exception to the lack of seated accommodation and some of whom were rumoured to let the tram pass in the hope of catching a conventional one.

The tram did help to influence the design of a new type of railcar  that might have formed the basis of a rejuvenated tramway system in a more favourable political and economic environment; but the decision to end tramway operations in Leeds meant that only two of these were produced: Leeds 602, which is also at Crich and its sister car, 601, which was eventually scrapped.

Because 600 was the last of the trio to enter service, by which time the fate of the tramway had already been sealed, it was never able even to demonstrate its true potential since it spent its entire working life – lasting just three years – operating on route 25 from Swinegate depot to Hunslet. This was a short two-mile ‘backwater’ service along urban streets with no reserved track on which the tram’s powerful motors could have provided the high speed service for which they were intended.

All in all it was a rather ignominious end for a tram that had promised and – at least in its earlier guise – delivered so much. As a non-standard tramcar 600 was last used in service on 27 September 1957, after which it remained in storage at the Swinegate depot until the closure of the Leeds system on 7 November 1959. It was then sold to an enthusiast and transported to Crich in May 1960. It did operate briefly at the museum in the early days (between 1969 and 1972) and even achieved a brief moment of glory before that when it became the first Leeds tram (and also the first four-motor tram) to run under its own power at Crich in September 1969.

Despite its unusually short working life, however, it was unable to join the operating fleet because its replacement bogies – which were sourced from a tram that was damaged in a fire at Liverpool’s Green Lane depot – have cracks in the side frames. Since its arrival at the museum, most of its time has been spent either as a static display or in the museum’s off-site storage facility, where it is currently housed.

Leeds 600 illustrates a familiar dilemma confronting the tramway museum at Crich. As an unusual tramcar with an interesting history, it was the type of tramcar that was popular with enthusiasts, which made it a prime candidate for acquisition in the early days of the tramway preservation movement.

For a museum that aims to depict the historical development of the tramcar, however, ‘one-off vehicles’ such as 600 can present a problem, particularly where they have been extensively modified and have had little significant influence on tramcar evolution more generally. The dilemma is particularly acute where space for displaying and even storing the many tramcars in the collection is at a premium.

As a final aside, it is perhaps instructive to note that today’s transport planners in Leeds are no closer to resolving the endemic congestion problems that so exercised Vane Morland, having still failed at the time of writing to get a tram or even trolleybus-based public transport initiative off the drawing board more than sixty years after the original subway scheme was shelved.

1945 temporarily fitted with bogies, motors and controllers from an ex-London HR2 car but restored to its old bogies after 1946
Renumbered as Leeds 288 in November 1948 and as 600 in 1950.
1949-1954 completely rebuilt with tapered ends and central entrances, internal saloons with reduced seating accommodation, replacement bogies from trams salvaged from fire in Liverpool’s Green Lane depot and various additional parts from Bradford, London, Glasgow and Southampton trams and also London Underground trains.

Sold to an enthusiast and transported to Crich in May 1960

Not restored to operational service because of damage to bogies.

Current status
Not operational. In store since 2005.
Date started operating at Crich
1969. Has operated in 3 seaons, most recently in 1972.
Total mileage covered at Crich
221
Current location
Off-site storage facility