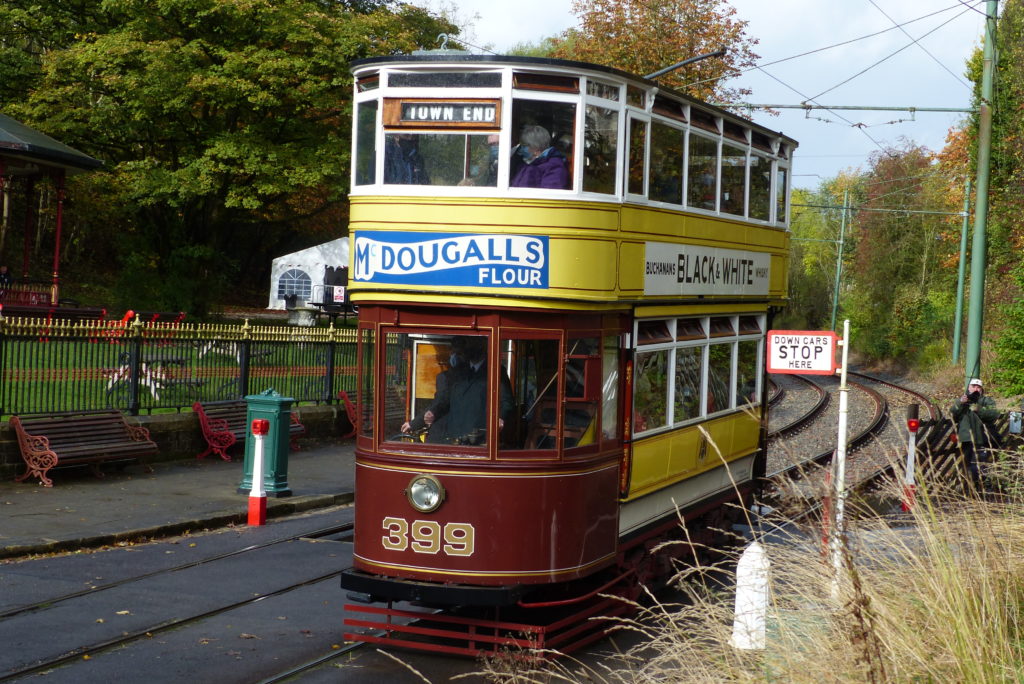 Although tramcars tended to cost a lot more than motorbuses when new, they normally lasted a lot longer in service and, even after withdrawal, some of them continued to earn their keep for their operators in some other capacity. One such example is Leeds 399, which was built by Leeds City Transport at its Kirkstall Road Works in 1925. The batch of which 399 formed part constituted the first totally enclosed tramcars to enter the Leeds fleet, though the basic bodywork closely resembled the traditional open balcony cars that had operated in Leeds with only minor variations since 1908. At the time it entered service (in April 1926), Leeds trams were painted in chocolate, primrose and white and 399 was the last car to emerge from the paint-shops in this – its current – livery. This colour scheme was soon to be replaced by a new princess blue and white livery, however, and 399 itself was repainted in this guise in 1928.

Although it looks a more traditional car than Leeds 345, which is also in the collection, it is actually five years younger than the latter, which was originally built as an open balcony car but was modernised in the 1930s; this renovation, together with its updated dark blue livery, helps to explain 345’s slightly more youthful appearance. In its early years, 399 is thought to have been allocated to the Swinegate Depot and saw service on the hilly Rothwell route, for which it was well suited since it was equipped with an early form of air track braking system in addition to its mechanical track brakes. These were required when negotiating the steep downhill section on the approach to Rothwell. After this route closed in 1932, 399 was redeployed on a number of other routes with hilly sections including those to Rodley, Pudsey, Morley, Tingley and Beeston.

During the war, 399 acquired a third major change of livery when its recently repainted blue and white colour scheme (applied in October 1939) was replaced for a time in 1943 by khaki. Chameleon-like, it reverted to dark blue in October 1946 only to be repainted in a simpler blue colour scheme in 1949. By this stage Leeds was about to acquire an influx of second-hand cars from Southampton, Manchester and London and this enabled many older cars – including 399 in June 1951 – to be withdrawn. This was not quite the end of the line, however, for 399 was allocated a new role as a depot shunter back in its native Kirkstall Works, though it did have a brief outing in 1952 when it was used to transport workshop staff to Harehills following a serious collision at Oakwood. One final journey through the streets of Leeds under its own power was made in 1957 when the closure of the Kirkstall Works necessitated a move to Swinegate depot.

Shortly after this, 399 was acquired for preservation by the Leeds Tramway Historical Society, which meant that it left Leeds just before the Leeds system itself closed, arriving in Crich on 15th August 1959. It was only the second tramcar (albeit the first passenger tram) to arrive at the newly acquired site, since it was preceded only by Cardiff water car 131. This gives it the distinction of having spent longer on site at Crich than any other tramcar since 131 was stored off site for a number of years awaiting restoration. It was to be quite some time before it was able to join the operational fleet at Crich, however, since it had become increasingly decrepit during its ‘retirement years’ while operating as a shunter at Leeds.  So it required extensive work on both body and truck before it was finally able to enter service in 1991. Thereafter it has been one of the regular ‘workhorses’ of the fleet apart from brief periods (for example in 2007) during which it has been out of action while undergoing remedial work. Such lay-offs have been rare, however, and its performance in 2012, when it topped the annual ‘mileage chart’ for operating trams at Crich, is much more typical.

Type of tram
Double deck fully enclosed four wheel electric tramcar
Livery
Chocolate, primrose and white
Seating capacity
70 (24 downstairs, 46 upstairs)
Date built
1925
Date entered service
3rd April 1926
Manufacturer of body
Leeds City Transport
Manufacturer of truck
Peckham P22. [The tram looks to have been designed for ‘pivotal’ trucks and the timbers above the truck have been prepared for mounting them. In the end, however, the car entered service on P22 trucks, which it retained for the rest of its life].
Gauge
4’ 8½”
Motor
Dick Kerr 30B1 2 x 50hp
Controller
DK DB1 K4B with air box tops
Current collector
Trolley pole
Modification

Minor changes to the route indicators in 1930 (single blind destination indicator replaced by three blind type). 1938 – the original trolley pole was replaced by a bow collector.

8th June 1951, whereupon it became a depot shunter back in Kirkstall Works

Extensive restoration of both body and truck was required following a severe deterioration in its condition while being used as a works shunter after its withdrawal from passenger service.

Current status
Restored in operational condition. Commissioned for service as part of the operational fleet during the current season.
Date started operating at Crich
1990. Has operated in 30 seasons, including 2021.
Total mileage covered at Crich
30,176
Current location
Depots