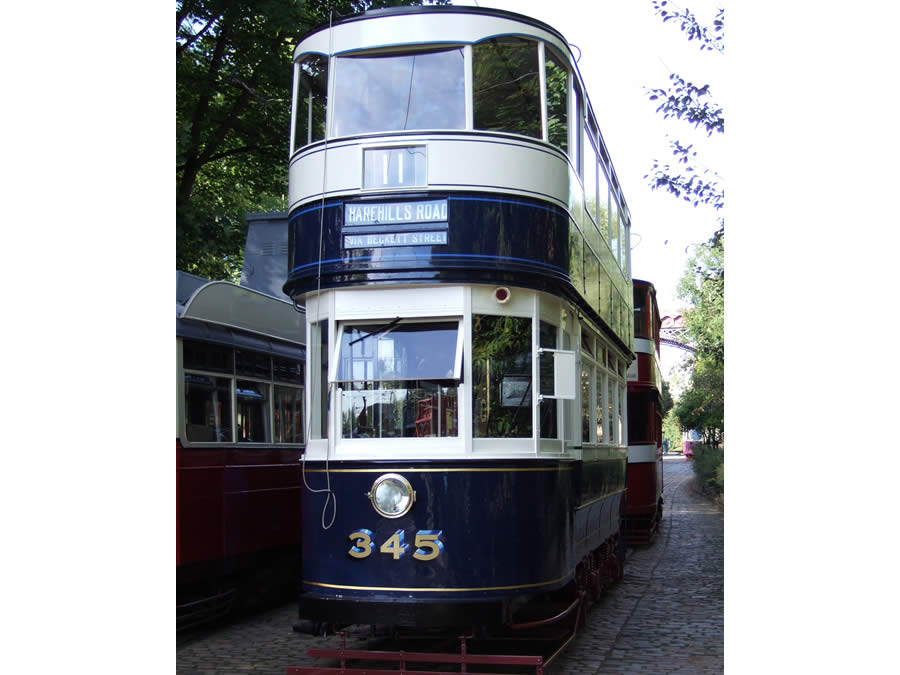 Leeds 345 was originally built in-house by Leeds City Transport in 1921 as a typical open balcony four wheeler with reversed stairs, in common with virtually the entire Leeds passenger fleet at the time. When first introduced it sported the livery currently displayed by 399 and only acquired its dark blue livery in December 1927.

As the Leeds fleet was modernised during the 1930s, however, the open balcony cars appeared increasingly obsolete even though they were still by this stage less than 20 years old. As this was also an era of financial stringency, the transport committee decided that instead of replacing them all with new trams they would convert the later ones such as 345, with the aim of modernising their appearance and thereby extending their working lives. Many other tramway operators adopted a similar policy, though the extent (and resultant cost) of the conversion process was very variable. The conversion process adopted by Leeds, which 345 underwent shortly before the war, was relatively straightforward and economical since it consisted of little more than enclosing the balconies themselves, replacing the old-style reversed stairs with a direct staircase, removing the upper deck bulkheads and adding platform doors, though the seats were also upholstered at the same time and a bow collector was substituted for the original trolley pole. Thereafter, 345 and the rest of its class were often referred to as ‘Converts’ and most continued in service throughout the war and beyond, though the majority had been withdrawn and scrapped by 1950. When number 345 was due for an overhaul in 1948, however, its body was found to be in poor condition and, as a result, it was requisitioned for use as a joiners’ shed, a decision which almost certainly secured its salvation and ultimate preservation. By the time the Leeds tramway was abandoned in 1959, number 345 (which was still in running order) was selected for preservation, one factor in its favour being that its truck – a Hurst Nelson 21E – was thought to be the last one still in existence.  Even so, it was only just rescued in the nick of time as sufficient funding for its purchase from the scrapyard was only raised on the day it was due to be broken up!

Leeds 345 was only the fourth tramcar to arrive at the newly acquired site in Crich. Because of the poor state of its bodywork, however, this car was not part of the original operating fleet and for many years even the type of restoration that would be most appropriate – whether as an open balcony car or a semi-modernised ‘convert’ – was a matter of considerable debate and uncertainty.

Eventually it was decided (in 1978) to restore it to its current ‘converted’ state but subsequently the tram was placed in store off site in 1982 while awaiting its turn in the workshops and also for the fund-raising process that would be required before this could happen. In 1999, the tramcar again narrowly avoided destruction when vandals set fire to the storage premises and flames were already taking hold on the roof when the fire brigade arrived and managed to quench them.

Following this narrow escape, the car did not return to Crich until 2002, by which time funding for its restoration had been provided by the Tramcar Sponsorship Organisation, and it was only in 2006 that the car re-entered service.  It was the first tramcar to be restored in the then newly extended workshop. 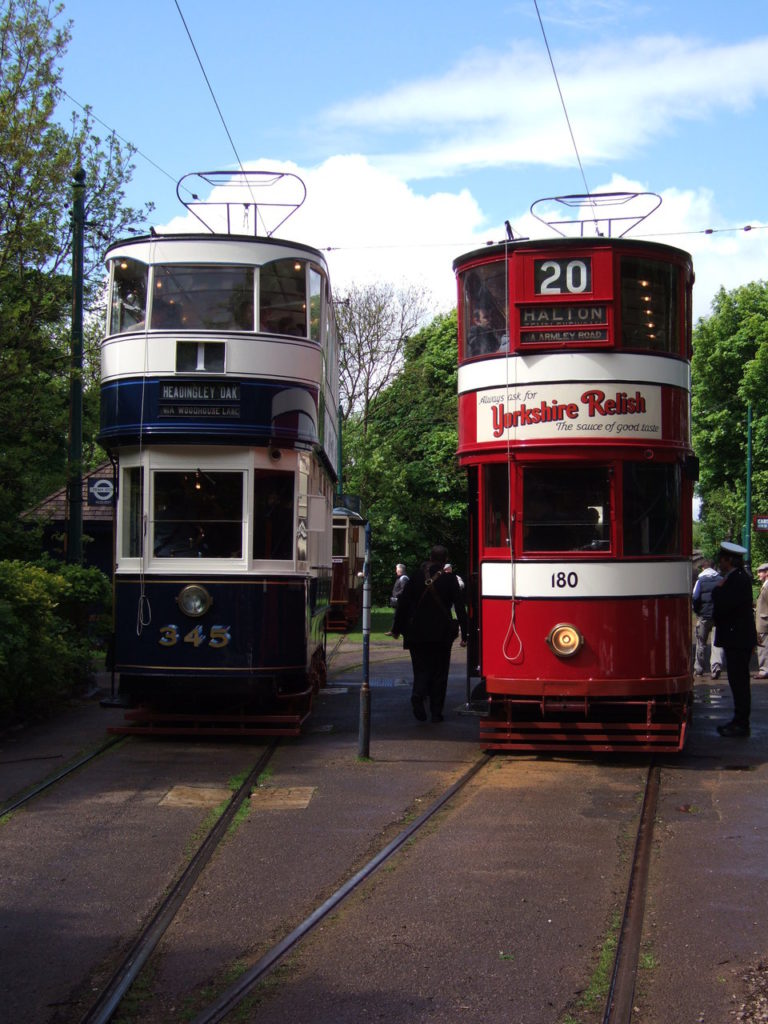 1939 Rebuilt by Leeds City Transport which involved a conversion from an open balcony car with reversed stairs into a fully enclosed car with direct stairs, platform doors and added vestibules. The original trolley pole was replaced by the current bow collector and new motors were also installed. The upper deck bulkheads were removed and seats upholstered at the same time.

Acquired by Leeds Transport Historical Society in 1959, which saved it from the scrap-yard for preservation. Transported to Crich on 18/12/1959.

Initially (1963) intended for restoration in its original condition as an open-balcony car but then in 1978 it was resolved to restore it as a ‘Convert’ car. Placed in off-site storage in 1982; returned to Crich in 2002 and entered service in 2006 after a full restoration.

Current status
Restored in operational condition. Commissioned for service as part of the operational fleet during the current season.
Date started operating at Crich
2005. Has operated in 15 seasons, including 2021.
Total mileage covered at Crich
11,969
Current location
Depots