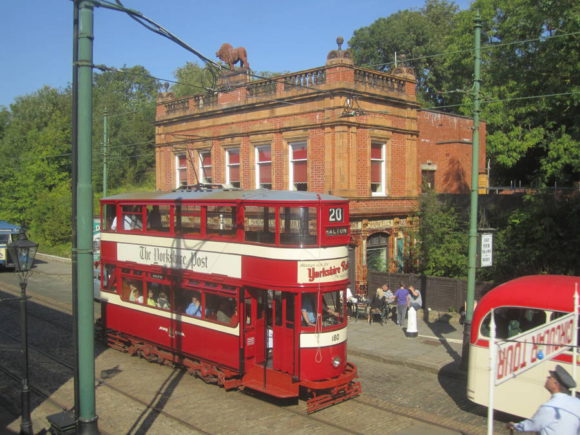 One of the most obvious and distinctive features of a tram is its colour scheme and tramcar liveries form an interesting aspect of transport history in their own right. In the early days of horse drawn tramways, when standards of literacy were fairly rudimentary, many operators designated particular colours for specific routes (as exemplified by Cardiff horse tram 21 in the collection).

During the electric traction era that followed, a great many tramways were no longer operated by localised small-scale private operators but by local corporations on a city-wide basis, and these often adopted a distinctive livery as an expression of civic pride.

The choice of livery was often the product of lengthy deliberation and in many instances persisted for many years with few, if any, changes. Indeed, attempts to change a city’s colour scheme were not always successful, as Sheffield Corporation found to its cost, when a public outcry in favour of its much-admired traditional blue and cream livery forced it to abandon an experimental all-green colour scheme, in 1953.

However, Leeds City Transport was somewhat unusual in adopting at least four main changes of livery during the 67 years of municipally-operated electric tramways and, of the five Leeds electric passenger tram cars in the collection at Crich, only two (180 and 600) share the same colour scheme. Part of the explanation for this may reside in the fact that Leeds effectively delegated responsibility for this decision to the tramways manager. Leeds 180 once formed part of a large fleet of tramcars (numbering over 100) that was designed and commissioned by the then manager, Bob Horsfield, as part of the extensive modernisation programme he inaugurated during the early 1930s. For this reason they were often referred to as ‘Horsfields’. Because this class of trams was exceedingly brightly lit, however, they were also known as ‘Showboats’ after the Jerome Kern musical of the time. Although the first few trams in the class were built in the Transport Department’s own works at Kirkstall Road, the rest of the batch were supplied by Brush. One of the most notable features of the Horsfield trams was that – unlike many of their predecessors – they were able to operate on all routes, even the hilliest, without difficulty.

A relatively unusual design feature is that in this particular class of trams the body simply rests on the truck instead of being bolted to it in the normal fashion for four wheel tramcars. This had the advantage of facilitating relatively quick and easy truck replacements, a factor which may have helped to secure 180’s survival into preservation towards the end of its working life.

During its early years in service, 180 appeared in a princess blue and white livery (currently exhibited on Leeds 345), but some of the fleet was subsequently repainted in a war-time livery of khaki green with maroon trucks, white bumpers & white band. This was introduced in 1942 but reverted to blue after the war, though the precise shade of blue underwent a number of subtle variations. At the end of 1949, the Leeds fleet was augmented by a number of ex-London Felthams that were painted red, and this ultimately inaugurated yet another change of livery. After several variations had been tried, a new standardised livery of British Electric Traction red and whie with a grey roof was adopted for Leeds trams in 1952 (while its buses were painted green). It is this final livery that Leeds 180 currently displays. Although it was originally equipped with a trolley pole (one of the last cars in Leeds to sport one), this was replaced by a bow collector in 1938 and in 1934 platform doors were fitted. For many years it operated on the no. 14 Stanningley-Corn Exchange route.  In 1936, 180 was involved in a fatal collision involving a motorcycle combination and another tramcar. Many of the Horsfields remained in service until the system closed in 1959, though 180 itself was withdrawn for a time in 1957 in order to provide a source of spares. Shortly afterwards, however, a sister car – number 189 – was written off in a collision with a bus and this resulted in 180 being returned to service, albeit using 189’s truck and inheriting its number. Fortunately, the Horsfield design meant that this was a relatively straightforward and easy procedure. In this guise it, too, continued in service until the system was closed, and even took part in the final closing procession.

After it was selected for preservation and moved to Crich, in February 1960, it reverted to its original number, partly for reasons of authenticity, but also to differentiate it from Sheffield’s 189, though the subsequent arrival of another 180 from Prague thwarted this endeavour to maintain its distinctive and unique identity.

Following its arrival at Crich, it took eight years for the volunteer workforce to prepare the car for operational duties.  So, Leeds 180 first entered service at Crich in August 1969 and, after running intermittently during the next two decades, was re-launched in August 1989 following a major programme of work.

In November 2009, the tram achieved television ‘stardom’ when it featured in an adaptation of Kay Mellor’s “A Passionate Woman” – set in Leeds during a visit by the Queen in 1950 – part of which was filmed in the tramway village.

Despite sharing a number with Sheffield 189 for a while, in other respects the two tramcars provide an interesting contrast in the way two adjacent English cities managed to produce broadly similar tramcars while still preserving their own distinct identities and local colour variations. 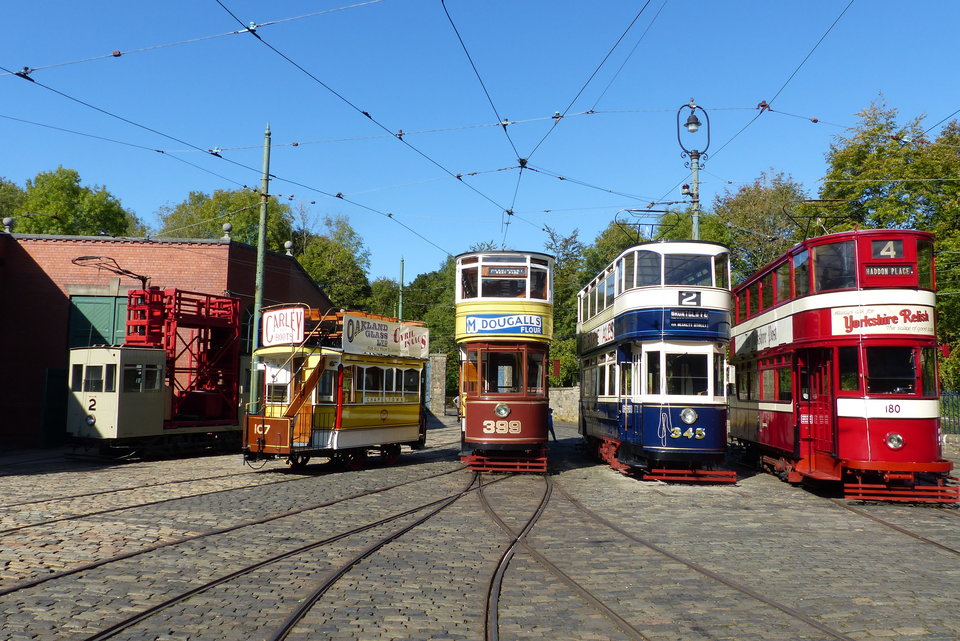 A recent line-up of Leeds trams on 21st September 2019 shows some of the different liveries that were adopted by this one operator through the years. Photo: Jim Dignan

Similar contrasts might have been encountered during the 1930s in most of the other towns and cities that still retained their tramways, thereby contributing to the geographical diversity of everyday travel between, or even within, different urban areas, particularly those that were served by more than one tramway undertaking. 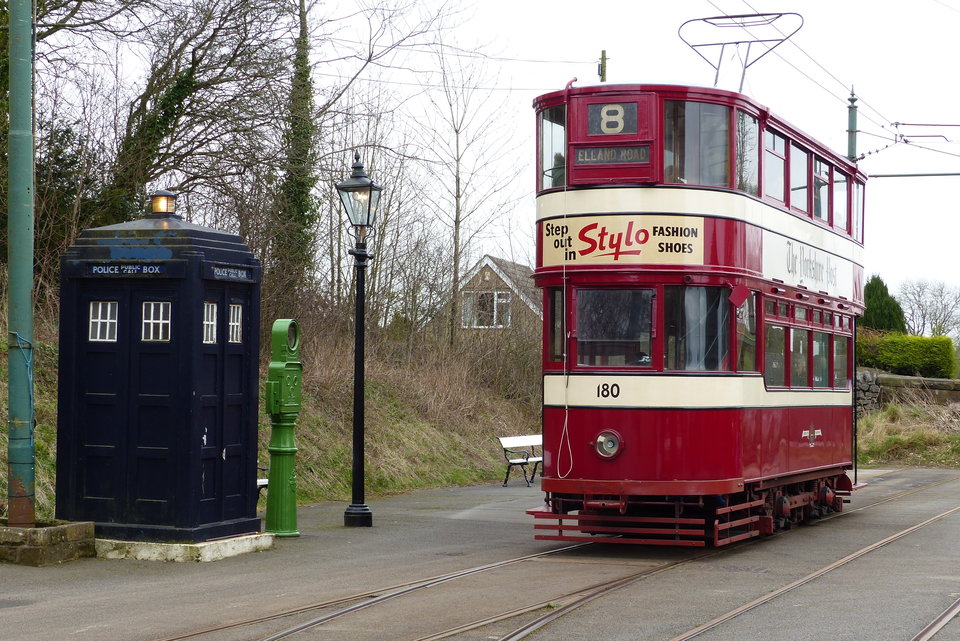 Facing an uncertain future. Leeds 180 at Town End on the last day of operation before the closure of the museum in response to the Covid-i9 virus. 19/3/2020. Photo: Jim Dignan

Initially withdrawn in November 1957 with a view to using it for spares, but refurbished and re-instated.on the truck belonging to 189 after the latter was seriously damaged in a collision. Renumbered as 189 at this time.

Took part in the last tram procession on 7th November 1959 and saved for preservation, moving to Crich, where it had its original number restored, in February 1960.

Launched into passenger service at Crich in 1969 after initial restoration and then re-launched in August 1989 after a major overhaul. Further overhaul in 2009.

Current status
Restored in operational condition but not currently commissioned for service as part of the operational fleet.
Date started operating at Crich
1969. Has operated in 43 seasons including 2020.
Total mileage covered at Crich
31,254
Current location
Depots