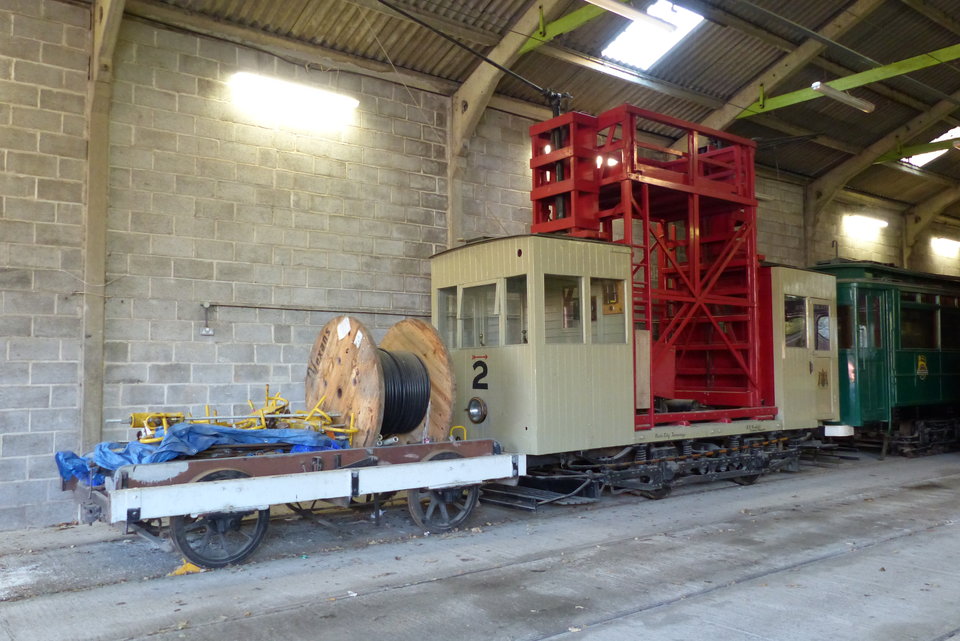 Leeds Works car no. 2 is a tower wagon (or derrick) and was purpose-built  in 1931 to assist in the construction of a number of off-road ‘reserved track’ routes that were laid on railway-style ballasted sleeper tracks, such as the Middleton Light Railway. Existing road-based tower wagons were not so suitable for this purpose, which explains why no. 2 came into being. The tram reflects the “make-do-and-mend” attitudes of the day as it was based almost entirely on second-hand parts of trams that were about to be broken up. It originally utilised the cantilever truck of a decommissioned tram (110A), to which the tower and frame of a pre-existing four wheel tower wagon were attached, together with two cabs of match boarding. Subsequently it acquired a replacement truck from tower wagon number 1 (ex 80A) when that car was scrapped in 1954. One of its most unusual features is that it was initially fitted with both a trolley pole and a bow but, when bows became standard in Leeds in 1938 it acquired a second bow, which it retained for the rest of its life. After completing its initial work on the erection of overhead wiring for the ‘new’ reserved track sections, the tram was mainly used on maintenance and repair work until the closing days of the system, when it was required to help in removing the overhead wiring. One of its last major tasks was the removal of overhead equipment from Cookridge Street and Park Row after the closure of the Lawnswood tram service in 1956. Prior to this, the tramcar had been out of commission for a short time with a defective truck but it was given a new lease of life when it was fitted with a replacement truck from a much older tower wagon (no. 1) that was about to be withdrawn from service.  The works car was repainted and renumbered ‘1’ before returning to service in December 1953.

The tram remained in service until 1959, when it was finally withdrawn.  It was acquired by enthusiasts in 1960 as the final remnants of the Leeds tramway system were being disposed of and, after a short period in which it was stored in the open, it moved to a building in Garforth in 1964, which enabled the restoration process to move up a gear. It arrived at Crich in 1969 after six years of intensive restoration work by volunteers. They were so thorough that the car was able to run on test within 24 hours of its arrival. Although no longer in regular service, it does still put in an occasional appearance on enthusiasts’ days, the most recent being September 2019. 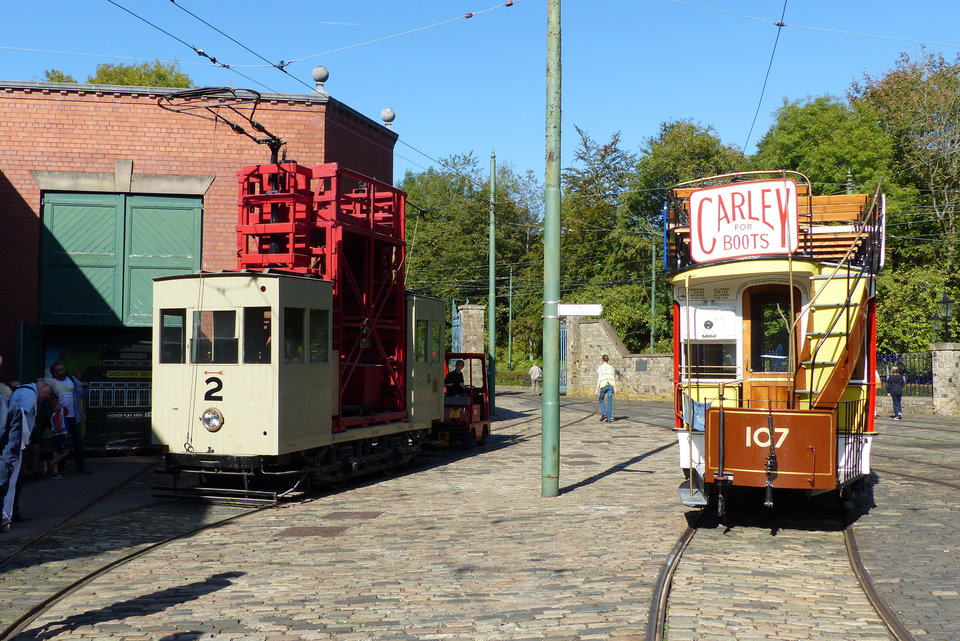 The original truck was swapped for a similar one that was salvaged from another tower wagon (No. 1), when it was scrapped in 1954. At this time No. 2 was re-numbered as No. 1 until the system closed in 1959

It was preserved through the efforts of the Middleton Railway Preservation Society and the Leeds Transport Historical Society.