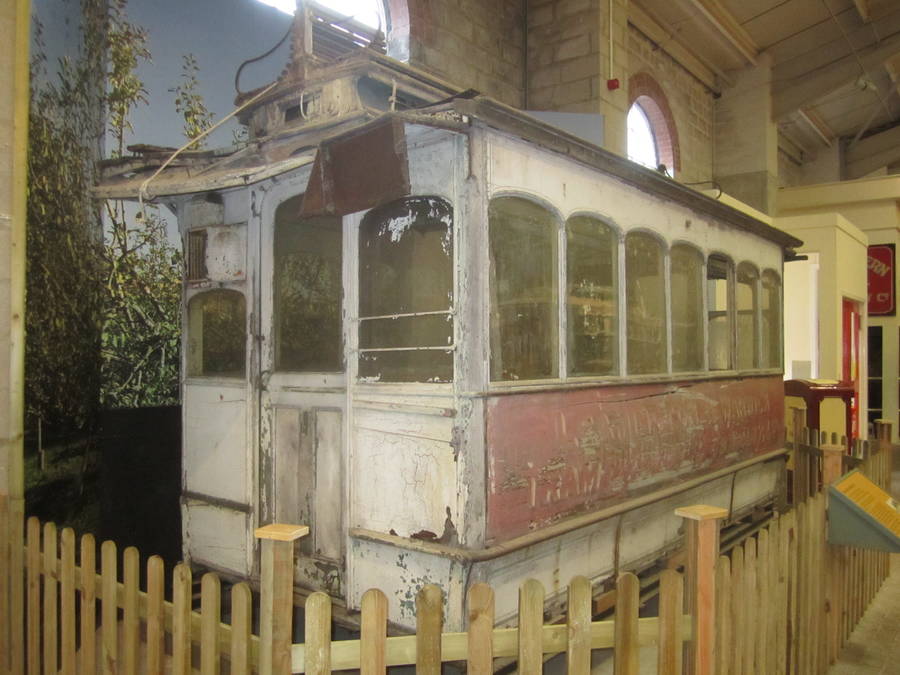 Leamington & Warwick 1 is an open-topped double-decked horse-tram that once ran on a single track tram line from Leamington Spa to Warwick.  The Leamington terminus was located at the then LNWR station yard while the Warwick terminus was located at the Warwick Arms Hotel, which still exists and is close to the Lord Leycester Hospital (actually an ancient alms-house)..  The tramway opened for passengers on 21 November 1881 and the three-mile length of line was covered in 50 minutes at a cost of 3d.  Two well-known Leamington men were actively involved in setting up the company, as a result of which the first trams were known as “Wackrill and Bright’s Rattlesnakes”. 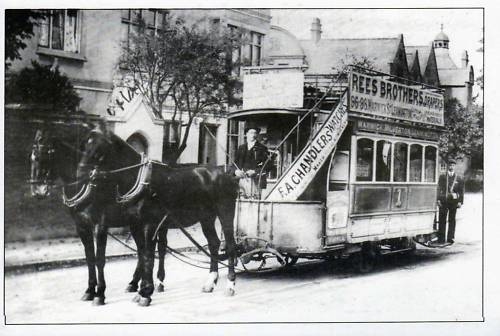 It generally took two horses to pull the double-deck tramcars, though when the cars were fully laden an extra trace horse was needed to assist on steep sections of track, such as by East Gate, where there was an arch. At first the tramcars passed underneath the arch itself, though passengers were not allowed to ride on the upper deck at this point. Rather surprisingly, however, since this is not an era that is known for its concerns about health and safety issues, the tracks were re-laid after a few months so that they no longer needed to pass under the arch.

In its heyday the service operated every 13 minutes, which required 7 trams (not all of them double-deckers) and 45 horses. Despite the outlay that this must have entailed the service appears to have been profitable for most of its life since dividends (of between 2.5% and 6%) were paid to share-holders between 1883 and 1901. In 1900, however, the company was taken over by Brush Electric Traction, who set about replacing the standard gauge single tracks with narrower 3’ 6” gauge double tracks and converting the system from horse to electric traction. The passing of the horse tram era was commemorated by the production of a somewhat ‘tongue- in-cheek’ “In Memoriam” post-card, which noted that the horse trams “succumbed to an electric shock aged 25 years”. As for the decommissioned horse trams, some were sold to Glasgow Corporation and others – including number 1 – were sold off.locally. Car number 1 was converted into a bungalow at Claverdon. Here it remained until it was rescued by the Birmingham Railway Museum in 1984 after which ownership passed for a time to the Science Museum, who transferred it to the Tramway Museum Society in 1993.

The tram has been conserved in unrestored state for display in the exhibition hall to enable visitors to appreciate the extremely decrepit state of a number of the museum’s tramcars at the time they were rescued and taken into preservation. Rather remarkably, this is not the only Leamington and Warwick horse tram to have survived into preservation as one of the tramcars that was sold to Glasgow Corporation (number 8) also escaped the usual fate for redundant tramcars and is now owned by Beamish, the living Museum of the North, where it is being restored as a Newcastle and Gosforth horse tram.

Converted into bungalow at Claverdon.

Rescued in 1984 by Birmingham Railway Museum. Owned for a time by the Science Museum but ownership transferred to TMS in 1993.

No concrete restoration plans at present.