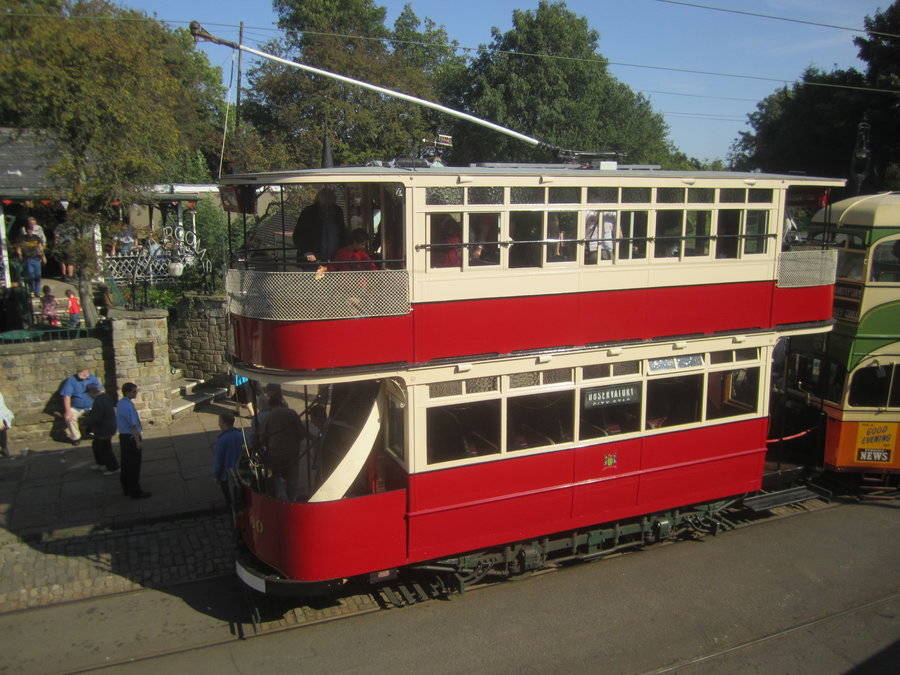 Johannesburg Municipal Tramways was British-built and managed and its British-supplied tramcars were virtually identical to those operating in countless British towns and cities apart from the fact that notices appeared in Afrikaans as well as English. Number 60 was one of a batch of sixty cars supplied by the Preston-based United Electric Car Company for assembly in Johannesburg. Shipping costs increased the overall cost of these balcony trams from £594 to £943. 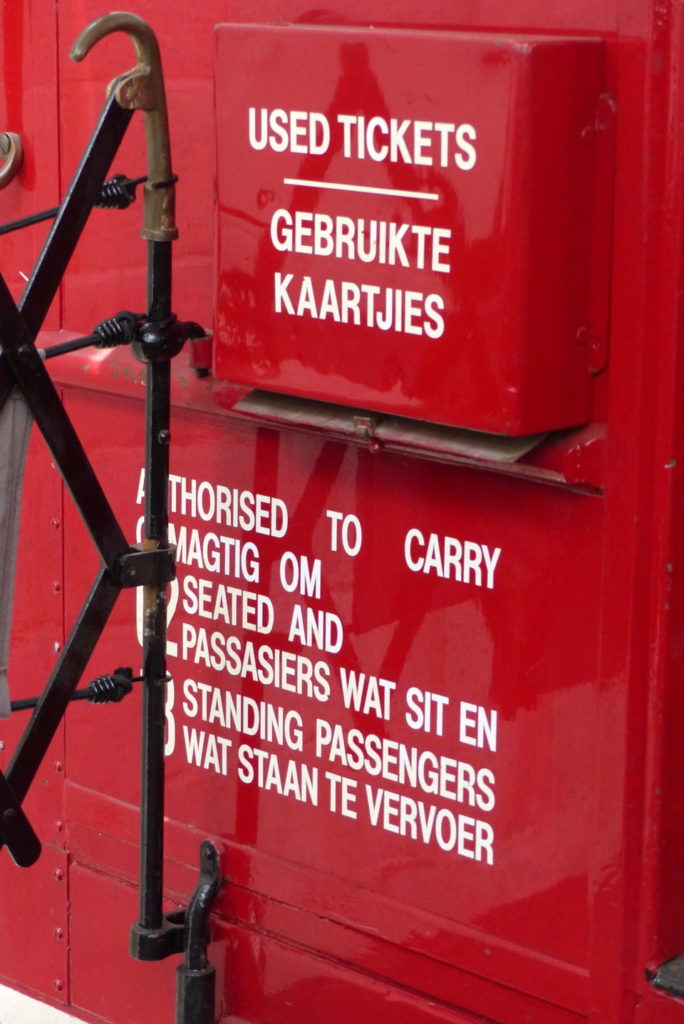 Bilingual signs – in English and Afrikaans – are an unusual feature on such an English looking tramcar. Photo: Jim Dignan, 22/6/2018

Originally the lower saloon had three windows and the upper saloon had six unglazed windows protected by horizontal metal bars after early experience with open-topped cars demonstrated their unsuitability for Johannesburg’s unpredictable weather. Additional protection from the elements was provided by means of striped roller blinds. As four-wheel tramcars with a short wheelbase they quickly became known as ‘Springbok Cars’ (named after a native species of antelope famed for its vertical ‘pronking’ leaps) because of the bouncy ride.

Although it may have looked like a standard British tramcar, however, the social context in which number 60 operated could not have been more different since it was dominated by a system of racial segregation whereby white and non-white sections of the community were segregated and accorded very different treatment, with markedly different rights and entitlements. The system came to be known as apartheid when it became enshrined in law in 1948, but the practice of racial segregation dated back to the earliest days of both Dutch and English colonisation. and covered the sphere of public transport.

Show more
Initially this meant that only white passengers were allowed to use the newly imported electric tramcars while non-whites were confined to the older horse-drawn cars that had been converted into trailers reserved for ‘Natives’. Consequently, Johannesburg 60 was fitted with couplings that enabled the trailers to be towed behind it. However, the use of trailers for non-white passengers was discontinued in 1910.

Thereafter, non-white passengers were for a time confined to the balconies until a court case in August 1914 established for the first time that they were also entitled to ride inside the normal service trams.

By the early 1920s most of the early British tramcars had succumbed to the excessive crush loading of passengers, which was commonplace and resulted in the pronounced sagging of balconies and platforms. As part of an extensive rebuilding programme that commenced in 1923 and was not completed until 1932, number 60 was completely rebuilt in the JMT workshops in 1931.

This greatly altered its appearance as the new lower saloon was fitted with five windows instead of the original three, with corresponding sliding windows fitted to the upper deck. Upholstered seats were fitted at this time and the original livery of dark chocolate outlined in gold was replaced by the blue and grey livery – with a garter placed on the waist panels – that had been introduced in 1922. The current cherry red and cream livery was introduced in 1936.

In later years, as the apartheid system became more entrenched, an extensive system of ‘native’ tram services was introduced and after this black passengers were only allowed to travel on ‘European’ services if accompanied by a white employer. At around this time the newer streamlined trams were generally reserved for white passengers while the older cars were mostly ‘reallocated’ to what were euphemistically described as ‘lesser duties’, meaning that they were reserved exclusively for use by non-white passengers. Such cars, which came to be known as “Kadalies” were designated by means of a distinctive silver livery and a vehicle numbering sequence preceded by the letter ‘N’.

It is not known for certain whether number 60 was reallocated, but it seems highly probable that it continued to operate on the ‘European’ services since it retained its red livery until it was withdrawn from service altogether in 1960.

After its withdrawal, the Tramcar Sponsorship Organisation expressed an interest in acquiring a four wheel balcony tramcar from Johannesburg Municipal Transport and initially agreed to purchase another recently withdrawn tramcar – number 20 – for £5 to which another £500 needed to be added to cover transport costs. Number 20, as the dedicated preservation car, was consequently spruced up and pressed into service as Johannesburg’s official ‘last tram’ on the final day of service on 18th March 1961. Following this event, which attracted a lot of media coverage and local interest, JMT came under a lot of pressure to hang on to its own ‘last tram’ and so it was agreed to dispose of number 60 instead, which was then smartened up and repainted prior to being dismantled and shipped to Britain in three sections: top deck, lower deck and truck. Photo courtesy of Crich TMS photo archive. Johannesburg 60 in the guise of Notts and Derby Tramways no. 14 on 11/5/1965.

After a five week sea journey on the City of Port Elizabeth, number 60 arrived at Hull docks on 15th December 1964. It arrived in Crich four days later on three lorries and not long afterwards secured a prominent role in a televised DH Lawrence play with a prominent tramway theme, “Tickets Please” – filmed on 11th May 1965 – in which it appeared masquerading as Notts & Derby tramcar no. 14, despite a lack of electrical power at the time. The car was not ready for testing on the main line until 4th June 1966. Masquerading as Manchester 717, taken on the set of Howard Spring’s “Shabby Tiger” in 1973.  Photo: Richard Lomas.

In 1973 Johannesburg 60 secured another starring role – together with Blackpool 49 – in Howard Spring’s “A Shabby Tiger”, in which it masqueraded as Manchester tramcar no. 717. This was its first ‘active’ performance, as it was now operational once more, since retiring from passenger service in Johannesburg over a decade earlier.

While still in its ‘Manchester’ guise, the tramcar entered the workshops in July 1976 for an extensive restoration, the first to be completed under the auspices of the then recently introduced job creation scheme. Sixteen weeks later it emerged with replacement dashes and balcony panels, new platform floors, refurbished seating, truck and electrical equipment, rebuilt staircases and a restored “Johannesburg 60” livery. The tram has continued to perform in service for most years since then though it has been periodically withdrawn for further repairs, particularly to the wheel sets. It did have a further film role in September 1983, when it appeared in some second world war scenes that were shot at Crich for a film called ‘Secret Places’ starring Jenny Agutter. It was also decked out with the flags of the 32 nations taking part in the 2010 World Cup tournament which was held in South Africa.

A planned outing to Blackpool in August 2010 to take part in the tramway’s 125th celebrations had to be aborted, however, when it hit a tree not far from the museum shortly after its journey by low-loader had begun.

Type of tram
Electric 4-wheel open balcony top-covered passenger tram
Livery
Cherry red and cream (original livery is thought to have been dark chocolate outlined with gold); repainting in the current livery probably took place around 1936. Some of Johannesburg’s trams were painted in a blue and grey livery
Seating capacity
58 (34 on top deck; 24 downstairs with official standing capacity for 18)
Date built
1905
Date entered service
Summer 1906
Manufacturer of body
United Electric Car Co./Johannesburg Municipal Tramways.
Manufacturer of truck
Brill 21E
Gauge
4’ 8½”
Motor
2x Westinghouse 249 2x60hp
Controller
DK DB1 K3 (not original, but bought from English Electric who are believed to have re-purchased them from Bolton Corporation and reconditioned them before supplying them to JMT). The originals were DK DB2.
Current collector
Trolley
Modification

Rebuilt in 1931 with five windows instead of the original three, sliding windows upstairs and heavier top decks than previously. The car was painted in the then-current livery of blue and grey with a garter placed on the waist panels.
1936 repainted in cherry red and cream with black trim edged in yellow. Route letter/number boxes were fitted on to the balcony panels

Probably 31st January 1960 upon closure of the north eastern routes, by which time number 60 was the only remaining open balcony car of its batch (number 41-80).

Accepted for preservation by the Tramways Museum Society in 1964 and shipped to Hull in December, arriving at Crich on 18 December 1964.

Current status
Restored to operational condition but not currently commissioned for service.
Date started operating at Crich
1977. Has operated in 27 seasons, most recently in 2013.
Total mileage covered at Crich
19,677
Current location
Depots