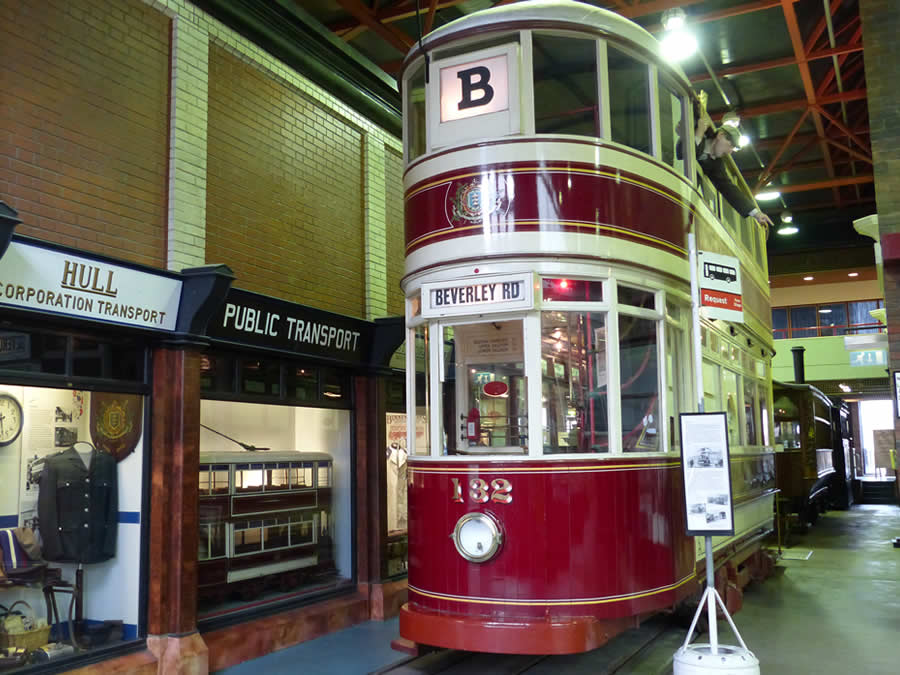 Photo: Jim Dignan. Hull 132 at the Streetlife Museum in Hull

Early electric tramcars in Britain differed from one another in a variety of ways: design of bodywork, degree of protection afforded for passengers and crew, seating (or standing) capacity, livery, the method by which electrical current was conveyed from the power source to the tramcar’s motors and also the gauge of the tracks on which they operated.

Hull 132 reminds us that these differences even extended to the profile of the tram tracks themselves and the manner in which contact was maintained with the tramcar’s wheels. Most tram rail was designed with a flat surface that provided support for the corresponding flat surface of the tram wheel, known as the tyre, and a groove on the inside of the rail which accommodated a narrow flange on the tram wheel that prevented derailment.. Hull City Tramways was one of a small number of early tramcar operators (Doncaster was another) that adopted tram rail with a central groove, which meant that each tramcar wheel also had to have a flange in the centre instead of at the inside edge. As joints in centre-grooved trackwork were cut diagonally instead of at right angles, this had the advantage of making for a much smoother ride than on conventional tram rails.

On the other hand, such an arrangement prevented the through running of tramcars onto any neighbouring system that used a more conventional rail profile and was also inconvenient if tramcars from such systems were later sold onto another operator. As there were no adjoining tramways the through-running issue was not a problem for Hull City Tramways though they did dispose of a number of redundant tramcars (including 132) to other operators, who then had to swap the centre flange wheels for those with a regular profile.

As for Hull 132 itself, this tramcar had an interesting history. It was originally built in 1910 by Hull City Tramways at the Corporation’s Liverpool Street works. This was an interesting transitional era in the evolution of double deck tramcar design from the earliest open-topped vehicles to those that were completely enclosed.

During this period, various attempts were made to provide a degree of protection for top deck passengers and one of the earliest designs was the so-called ‘Bellamy roof’ (named after the General Manager of Liverpool Tramways), which provided cover for seated passengers but left the balconies completely open.  Hull 132 was initially fitted with a somewhat similar partial top cover that left the balconies exposed.

In 1931, the tramcar was fully enclosed for the first time when the original roof was replaced with an entirely new top deck that was roofed from end to end. The tramcar’s current appearance dates from this time. The tramway museum does not currently have a tramcar with a Bellamy roof in its collection though one such tramcar – Wallasey 78 – has been restored to working order and operates on the Wirral Tramway and Transport Museum in Birkenhead. The only other distinctive feature of 132’s design is a unique staircase cover that lowers over the stair well from the upper deck. Once the cover is in place an additional seat drops down onto it. In other respects, however, the tramcar is a fairly conventional double decker.

Hull 132 was later equipped with relatively modern replacement truck, track brakes, motors and controllers that had been obtained from the Dearne District Light Railway when it closed in 1933 after only nine years of operational service.

The tramcar was withdrawn from the Hull fleet in 1942 after most of the city’s tram fleet had been replaced with trolleybuses but, in accordance with wartime regulations, had to be retained as part of the city’s ‘reserve fleet’. Meanwhile, other cities, such as Leeds, found themselves in need of additional tramcars, partly to replace wartime losses and partly because of restrictions on the use of diesel engine buses.

Soon afterwards, 41 ex-Hull tramcars including 132 were sold to Leeds.  Once it had been re-tyred and, sporting a new number – 446 – this was the first of the Hull trams to enter service in Leeds later in 1942. Nicknamed ‘Kipperboxes’ on account of their place of origin and somewhat cramped seating, the ex-Hull trams appeared first in wartime khaki livery but were later repaired in dark (Princess) blue and white (similar to Leeds 345 in the collection). The newcomers were not entirely suited to their new home network, however, particularly on Leeds’ hillier routes. Consequently, the newcomers – including 446 – were based at the city’s Swinegate depot and operated mainly on the lower lying Hunslet, Dewsbury Road, Compton Road and Beckett Street routes, though they were occasionally pressed into service on peak-hour duties elsewhere in the city.

On 21st October,1951 a tram tour organised by the Light Railway and Transport League in Leeds took place using Leeds 446.  Twelve months later, number 446 – by then the last of the ex-Hull cars still in service – was withdrawn, though by this time it had been acquired for preservation.

Even so, its future at this stage was somewhat precarious as the tramcar travelled around the country for a time in search of a permanent home.  It was worked on for a while in Bolton though full restoration proved impossible because its truck had been stripped of anything that might have been of use to Leeds, including its motors, various springs and other items of equipment.

This period of uncertainty was brought to an end when the tramcar became one of the first to be acquired by the Tramway Museum Society and arrived at Crich in May 1960, where it spent many years in storage. In March 1983, it was moved to Hull on long-term loan and, while there, has been cosmetically restored in Hull livery so that it can be displayed in the city’s ‘Streetlife’ Museum of Transport.

As the only surviving restored tramcar from Hull City Tramways in the collection, the current location for Hull 132 is entirely fitting and brings it to a much wider audience than if it has remained in storage at the Tramway Museum.

Taken into preservation and worked on in Bolton before being transferred to Crich in May 1960. Transferred to Hull’s Streetlife Museum on long-term loan in March 1983

Some restoration work undertaken in Bolton before arrival at Crich. Cosmetically restored in its original Hull livery while at Hull during the 1970s.