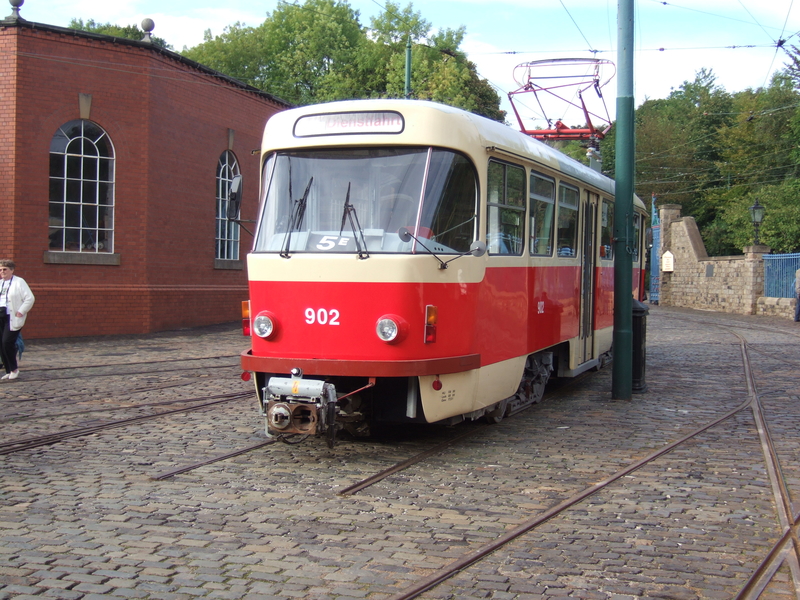 In many ways tramcars were rather better suited to the planned economies of the former Soviet bloc, where they were much less susceptible to the vagaries and unpredictability associated with market economies in the west. There they were relatively economical to build and operate by large scale state-run enterprises; there was also a reasonably constant and predictable demand since huge numbers of people had to travel daily between their place of residence and work-place; and private car ownership was far too restricted to pose a serious challenge to their dominance, as it did in the West.

For many years after the second world war, the largest tram producer in the world was CKD Tatra, which was based in Prague.  It exported its products throughout the Soviet bloc including to Halle, which was an important city and economic centre in East Germany. It was also one of the first cities in the world to operate an electric tramway, having installed one as long ago as 1891.

Halle 902 was built in 1969 as a standard T4D, which was an Eastern European adaptation of a hugely successful design of tramcar known as the ‘PCC’ (standing for ‘President’s Conference Committee’), which originated in the United States during the 1930s. As such, it was the commonest type of tramcar behind the iron curtain. Indeed, some 17,622 Tatras of this type (T3/T4s) were built, which is more than any other type of tram anywhere in the world.

Being built to a common design in this way achieved huge economies of scale but wasn’t very flexible in meeting the specific requirements of individual operators. For instance, every tram of this type was constructed as a single-ended tramcar with doors on only one side. Many operators did install doors on both sides and several, including Halle, asked if a double-ended version might be produced, but were always informed that a modification of this kind would not be possible.

Halle’s tramway persevered, however, and eventually succeeded in rebuilding their two original T4D’s, one of which was 902, as double-ended cars in 1984, thereby proving Tatra wrong. However, 901 and 902 were destined to be the only double-ended Tatras of this type ever to be built.

By the turn of the century both cars were becoming less and less frequently used as more modern vehicles were becoming available, and sister car 901 eventually became part of their preserved fleet. At around this time, the Tramway Museum at Crich was actively seeking a second access tram to provide a back-up for its existing ‘rekowagon’ from East Berlin (then numbered 3006), which had been providing this service single-handedly for many years.

When Halle 902 was offered as a second access vehicle it appeared to be an appropriate and fitting choice. As a relatively modern tram with good seating capacity, it would avoid the need to damage the integrity of a genuine historical artefact and, as another Eastern European tram, it would provide an appropriate alternative to the existing access tram. 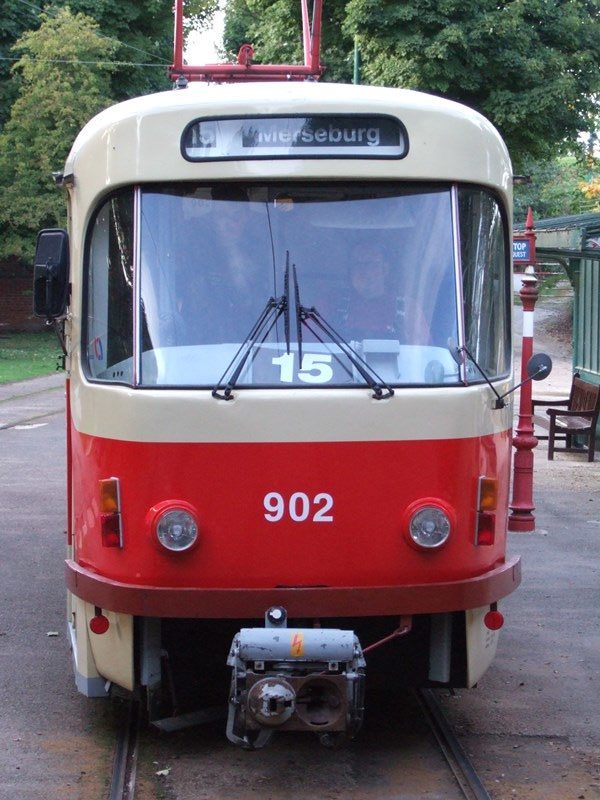 Since its arrival in 2005, however, number 902 saw only spasmodic use during its first season, with just a few passenger journeys and an occasional outing as a driver training vehicle. However, a succession of faults meant that it was often taken out of commission and, consequently, it was withdrawn from traffic at the end of its second year in service and placed in long-term storage in the depots.

It now seems highly unlikely that it will ever fulfil its intended role as a second access tram as it has a number of shortcomings including steep steps, restricted head height access and low internal headroom.  There are also a number of technical issues with the car relating to its speed characteristics and the equipment which would be needed to properly maintain the car.

This presents the museum with something of a dilemma. On the one hand, the tram is almost unique, since it is one of only two double-ended versions of a once extremely numerous class of vehicle. Moreover, it is the only example of a PCC-inspired Tatra tramcar in the country and, as such, is the sole representative in the UK of a class of tramcar that was once globally highly significant.

On the other hand, the almost unique adaptation of the tramcar to its current double-ended condition means that it is not strictly an authentic representative of this important category of vehicles. Nor is this the only adaptation since the tram has also been re-gauged from its original meter gauge and no longer has its original pantograph.

Number 902 is not the only tramcar in the collection to exhibit this tension between a claim to historical significance based on its ‘rarity’ value and a counter-claim based on a lack of ‘authenticity’ because of the modifications it has undergone. However, the chronic lack of storage space both on and off the museum’s premises at Crich makes the dilemma particularly acute in the case of Halle 902, especially in view of the fact that it is not a genuinely historical artefact in comparison with other tramcars in the collection.

At the end of May 2018, the tramcar was moved to Blackpool’s Rigby Road depot on a two year loan for temporary display and storage purposes that also helped to facilitate the acquisition of the Barnsley & District Electric Traction Company service bus.  The loan period is due to expire in 2021, however and, following its return to the museum, the tramcar will be placed in off-site storage.

One of only two examples of this once very numerous class of vehicle to have been converted from single-ended to double-ended status, which took place in 1984.
Subsequently, the original metre gauge bogies were replaced with standard gauge ones in Leipzig in 2005 and the original pantograph has also been replaced

Acquired by the Tramway Museum Society for use as a possible second access tram and brought to Crich in 2005.

No attempt has been made at restoration.

Current status
Currently on loan to Blackpool in unrestored non-operational condition
Date started operating at Crich
2005 for 2 years
Total mileage covered at Crich
277
Current location
Rigby Road depot, Blackpool, where it is on loan for the time being.
Future plans