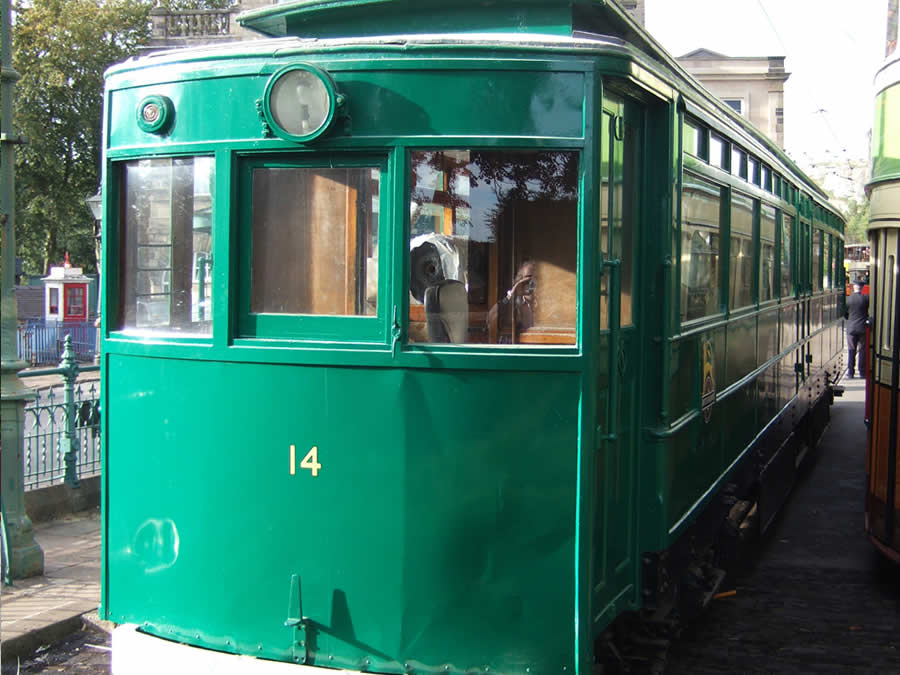 One of the big public transport news stories in the spring of 2012 concerned a proposal to pilot the concept of ‘tram trains’ on the second generation Supertram system in South Yorkshire by linking Sheffield and Rotherham with the aid of existing rail connections.

Six years later, the service still had not commenced by the spring of 2018.  However, Grimsby and Immingham 14 is a successful example of a kind of ‘tram train’ hailing from a much earlier era.

The tramcar is a fascinating hybrid that incorporates elements of early electric train-based railcars and more conventional interurban tramcars.  As a ‘one-off’, however, it is something of an anomaly and cannot be said to either represent, or have influenced, the development of first generation tramways more generally.

As befits its railway provenance, the tramcar was built by the Great Central Railway at its Dukinfield works in 1915 in order to service the rather unusual tramway that the company had built to connect its relatively inaccessible new deepwater coal dock complex at Immingham with the nearest pool of dock labour, which was six miles away in Grimsby. Although there was an existing steam-operated freight line serving the Grimsby and Immingham area, the electrically powered trams made use of a specially constructed parallel track, some of which used grooved tram rails in the street-running sections while the ‘inter urban’ part ran along railway-type chaired rails. As there was no physical connection between the two sets of tracks, however, the tramway did not represent a fully-fledged fore-runner of the tram-train concept where the same set of tracks are used by two different types of railed vehicles. Because of its rather unusual primary function as a means of conveying dock-workers, who were employed by the company free-of-charge to their place of work, the tramway carried relatively few fare-paying passengers, despite being very heavily utilised. This was not a problem in the early years while the same company operated both the tramway and the docks complex, but it became much more of an issue after both concerns were nationalised and, in effect, hived off into two separate utilities. Thereafter, the nationalised railway undertaking found itself effectively subsidising the docks utility and its unwillingness to sustain this burden without adequate compensation was one of the main factors contributing to the eventual closure of the line in 1961. Prior to this, the complex history of the tramway mirrored the organisational upheavals in the railway industry since the Great Central Railway was absorbed by the newly-formed London and North Eastern Railway in 1923, which was in turn nationalised in 1948. The most obvious external impact of these changes was a succession of livery changes from GCR reddish brown carriage livery to LNER teak and even brown for a short while after nationalisation, before it was decreed in 1951 that all electric vehicles should appear in British Railways malachite green.

The tramcar itself also betrays its railway origins in many aspects, including its overall size (being one of the longest tramcars – at 54ft 2in – to operate in Britain) and design, though it does also incorporate many aspects of tramway technology. 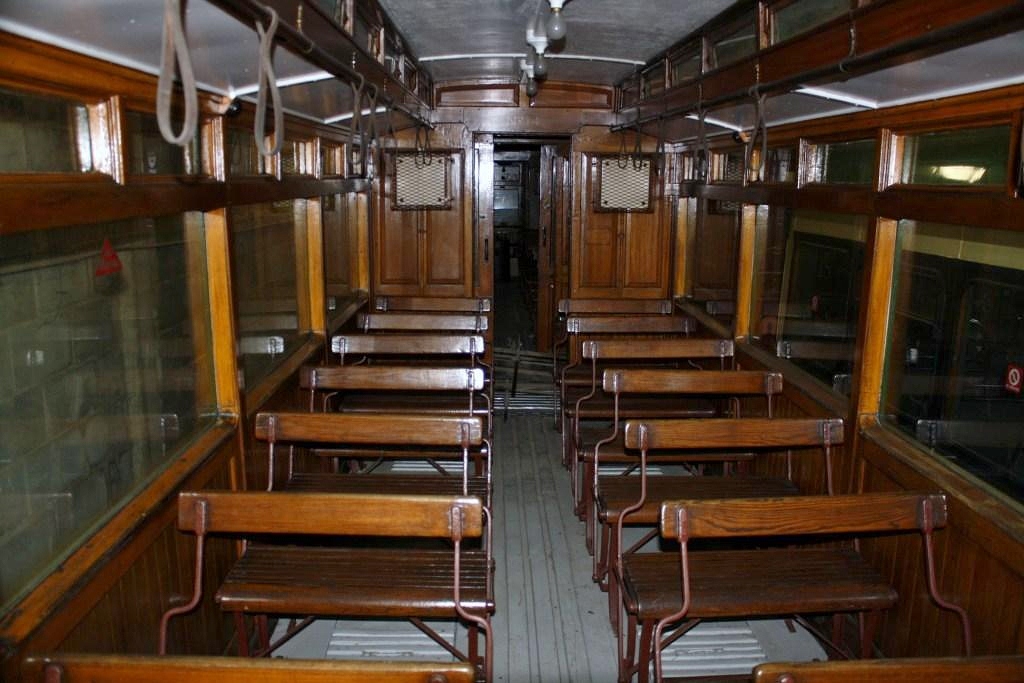 Interior of G&I 14, looking towards the so-called ‘fish compartment’, which is located in the centre of the car. Photo: Paul Abell

An unusual feature is the incorporation of a so-called ‘fish compartment’ in the centre, which is accessible by two hinged doors. Although little is known of the operational history of this particular car, there are reports that, together with sister car no. 1, one of the ends had to be rebuilt after a fatal collision in January 1958.

As is often the way with anomalies, the preservation of Grimsby and Immingham 14 has presented the preservation movement with something of a dilemma since it is neither a straightforward railway vehicle nor a conventional tramcar and, as such, it does not form an obvious part of the collections policy of either the National Railway Museum or the National Tramway Museum. This may help to explain the various changes of location it has experienced over the years.

It was initially intended for display at a railway museum in the Midlands, which necessitated a journey from Grimsby to what was then a British Rail facility at Clay Cross. Transporting such a long tramcar presented an unusual challenge, however, since its wheel profiles were felt to be unsuitable for the journey to be accomplished by rail, and there wasn’t a railway truck sufficiently large to accommodate it. In the end, therefore, it made the journey rather less fittingly in one of Grimsby’s largest removal vans.

Although the tramcar has spent most of its time at Crich tucked away in a depot, it did enjoy one brief moment in the limelight when, on Sunday 22nd July 2012, it paid a fleeting return visit to its home town of Immingham as part of the centenary celebrations of the opening of the docks complex there.  Unfortunately, the absence of adequate secured storage space on site meant that the historic return visit was confined to an all- too-brief weekend.

Despite its current ‘ugly duckling’ status, it would be nice to think that the advent of a new era of ‘tram trains’ might prompt a well-deserved renewal of interest in, and respect for, a remarkable early attempt to combine the advantages of two complementary forms of public transport in a single vehicle. 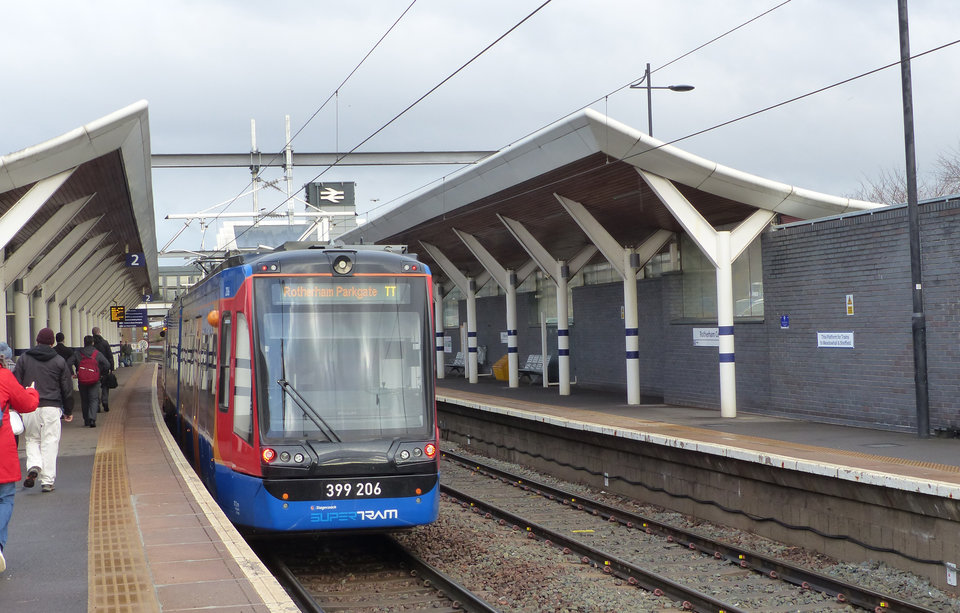 On 25th October 2018, the first British tram train service finally commenced between Sheffield and Rotherham, heralding a new era in tram travel.  Although the Grimsby and Immingham line was not a direct precursor, it did nevertheless represent an unusually early attempt in Britain to amalgamate certain aspects of two distinct forms of public transport.

Rebuilt after a fatal collision in January 1958.

Preserved by BR November 1961
In store until August 1988 when moved to NRM York for restoration.
Arrived at Crich June 1990.

Current status
On static display as restored by NRM. Not in operational condition.
Current location
Depots; on display