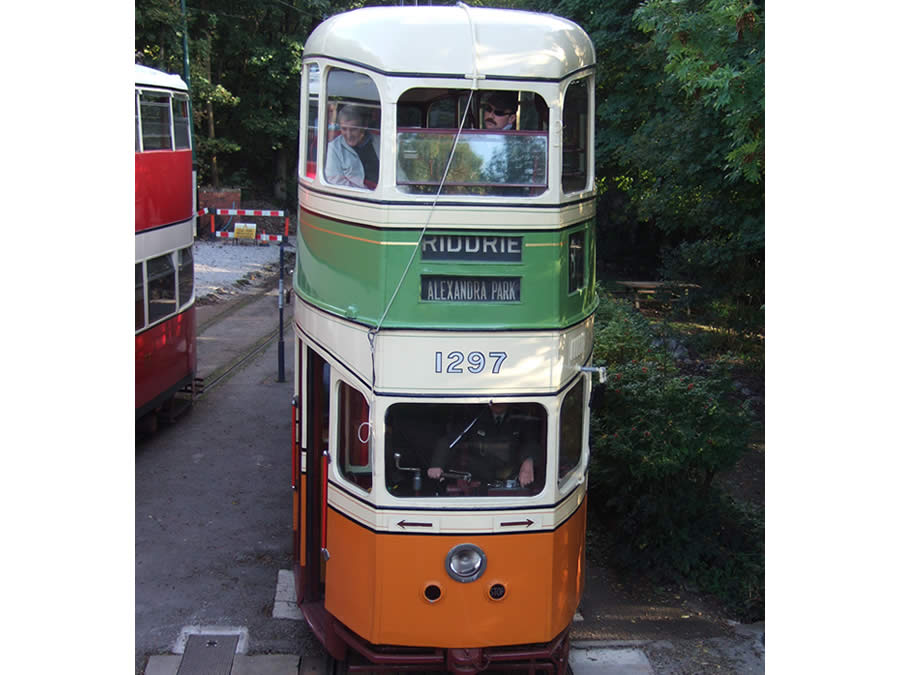 Glasgow 1297 is one of the last double deck tramcars to have been built in Britain before all but one of the first generation tramways were phased out; and, of the few post-war tramcar designs to enter service during that era, this was by far the most numerous. It was built in 1948 and was one of the first of a new class of 100 tramcars that came to be known as ‘Cunarders’.

They look very similar to the pre-war Coronation cars (one of which, 1282, also survives at Crich). Despite being commissioned in an era of post-war austerity and shortages of materials, the Cunarders betray little of this and the main changes from the pre-war specification relate to ease of maintenance and saving in weight. Being slightly longer, they could accommodate an extra six seats.

Despite their superficial similarity, the electrical and running gear was very different as the Cunarders were supplied with more modern Maley and Taunton inside frame bogies and Metro-Vick EP control gear. Even with these refinements, however, they never achieved the popularity of the pre-war Coronations. Indeed, it is likely – in the interests of standardisation toward the end of tramway operations – that they would have been withdrawn in advance of their predecessors had it not been for a disastrous fire at the Dalmarnock depot on 22nd March 1961.

As it was, number 1297 continued in service until the closure of Glasgow’s tramway on 4th September 1962 and was one of the last cars to run in the city after taking part in the final procession. A British Pathé newsreel that was filmed in 1962 shows a procession of Glasgow tramcars and captures something of the enthusiasm felt by the quarter of a million Glasgow citizens (roughly one-in-four of the population) who turned out to say goodbye to their trams). The sequence can be viewed by following the link to:
http://www.britishpathe.com/video/glasgows-last-tram/query/tram 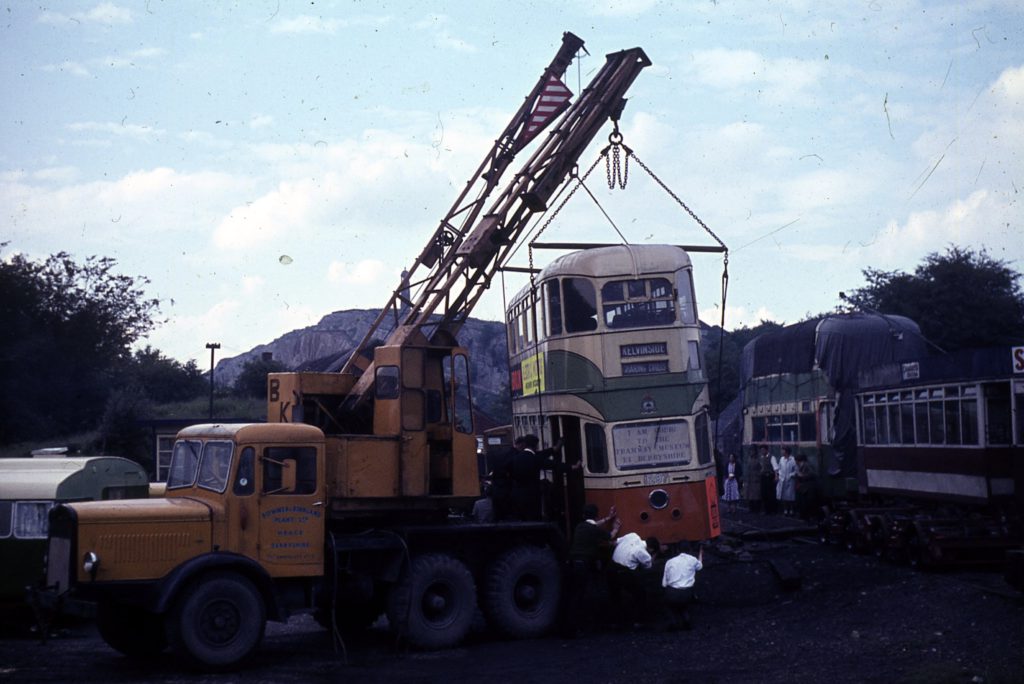 1297 arriving at Crich.  Loading and unloading tramcars was a much more precarious affair in those days!  Photo: Richard Lomas, 13/7/1963

This tramcar owes its survival to a private benefactor but, even after arriving at Crich on 13th July 1963, its initial prospects were still rather precarious as there was insufficient funding, at first, to meet the costs of depot storage and further efforts were required from a small team of sponsors to weatherproof the tram while in storage on site. However, the tram was still in excellent condition on arrival and was capable of entering service once tramway operations began at Crich with relatively little remedial attention. While at Crich it has been loaned to Blackpool (in 1985) and even returned briefly to its home city where it was a star attraction during the Glasgow Garden Festival of 1988. 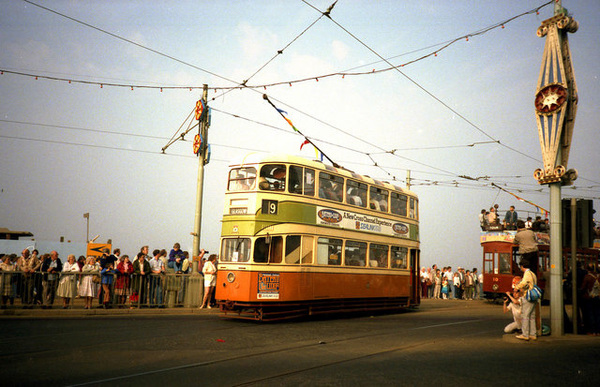 Glasgow 1297 at Blackpool in 1985. © Copyright Dr Neil Clifton and licensed for reuse under the Creative Commons Licence

During these visits the tram was fitted with a trolley pole instead of its original Fischer Bow collector and this caused some damage to the roof, causing it to be withdrawn. Repair work was undertaken and the tram received an overhaul in 2005 but a motor failure in 2007 precipitated a further withdrawal. 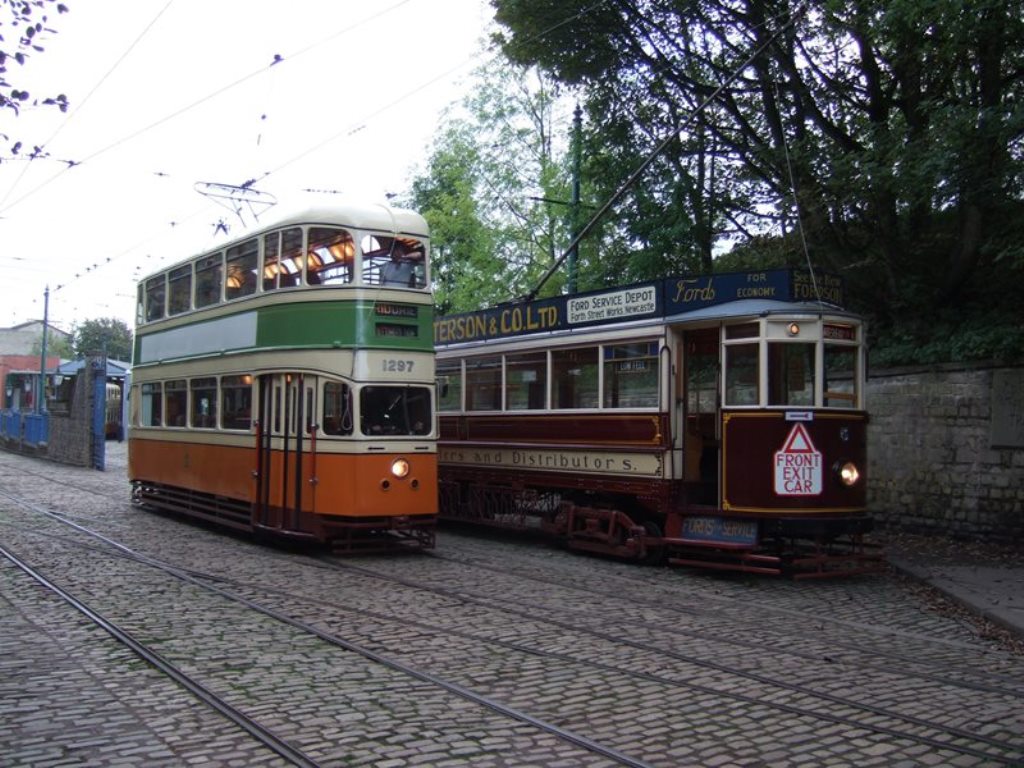 Restoring 1297 to operational condition would be problematic as it retains its original asbestos-covered wires and cables, which would require the services of specialist contractors for removal under strictly controlled conditions. Currently the tramcar has been assigned to a static display role.

Taken into preservation privately and arrived at Crich on 13th July 1963.

The tram was in good enough condition to operate at Crich without the extensive restoration required by many of the other trams, though it has been repainted three times and has received some attention to the interior. The lower deck seat covering is not authentic.
A trolley pole was temporarily fitted during its stint at the Glasgow Garden Festival in 1988.

No current plans for operational restoration.