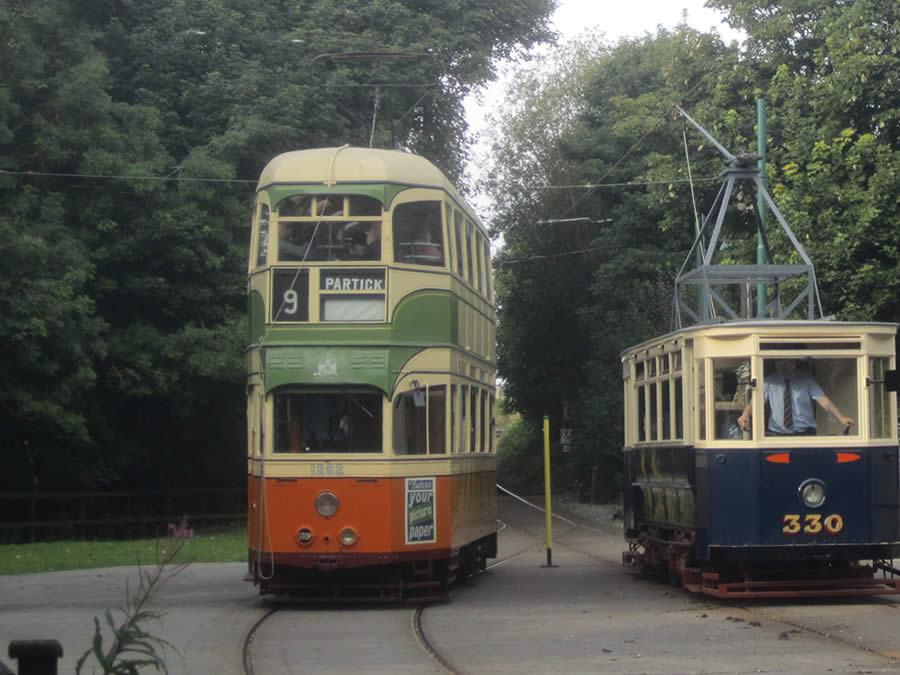 Glasgow during the 1930s was still in the grip of the great depression but in 1938 was due to host the Empire Exhibition, an international exposition that was intended to showcase the city and its accomplishments while providing a welcome boost to its economic prospects. Since there was already felt to be a need for additional tramcars, the decision was taken in 1936 to commission a new class of tramcars that would not only provide additional capacity but also help to demonstrate the city’s potential while ferrying visitors to and from the exhibition.

Since the tramcars were intended to serve as ambassadors for the city they were built to the highest level of specification and are considered to be among the most luxurious of tramcars ever to have entered public service. While other operators were introducing rather futuristic streamlined designs, Glasgow Corporation’s somewhat conservative Transport Department opted instead for a more restrained design incorporating tapered ends that allowed a longer tram to negotiate the city’s sharp curves (dictated by the gridiron layout of the streets) without interfering with the operation of other trams. What the design lacked in terms of stylistic flamboyance, however, it made up for in terms of the quality of the materials specified for the tramcar’s construction, which boasted steel underframes and teak body rails. The luxuriously appointed interior incorporated Alhambrinal panelling on the ceilings, integral mirrors and indirect illumination, which must have seemed palatial in comparison with the ten stark light bulbs that did little to lessen the gloomy interiors of the regular tramcars.

The trams were not only equipped with doors to keep out the cold but also built-in heating and ventilation systems. The comfort of passengers was ensured by the provision of leather upholstery and an entirely new type of truck – known as the EMB Lightweight Bogie – was developed using rubber shock absorbers, which made for a smoother and also quieter ride. Nor were the needs of the crew neglected as the trams also featured an enclosed cab for the drivers and an ornate mirror replete with art deco border pattern and embedded in mahogany panelling.

Although they were originally known as ‘Exhibition Cars’ within the Transport Department they quickly became christened “Coronation cars” by an enthusiastic public as the first of them entered service in 1937, which was the year George VI was crowned. Glasgow 1282 was built in early 1940 and because the country was already at war by this stage, a number of features were removed from some cars for safe-keeping during its early years. This particularly referred to the art deco lighting. After the war a number of modifications were made including the removal of the driver’s opening windows and other associated changes to the vehicle’s ventilation system. Despite its luxurious specifications, the tram endured a hard life during its 22 years of continuous service as its early years coincided with a period of war-time austerity while reduced levels of maintenance were also a feature of the tramway’s final years of operation. By chance, this tram was selected to operate special commemorative runs in Clydebank two days after the final procession in Glasgow and so – on 6th September 1962 – became the last tram of its generation to operate on Scotland’s streets. It was officially withdrawn on the same day, and was moved to the National Tramway Museum at Crich on 23 March 1963. Following a period spent in storage on the site the tramcar embarked on a full restoration programme in 1977 under the auspices of the government’s Job Creation scheme. This entailed a thorough stripping and overhaul of most of its internal and external components, replacement of its panelling and re-upholstering of its seats so that it was able to re-enter service in 1978, by which time it had reverted to its 1952 livery and operating condition.

The tram cost £3354 when new and was sold into preservation for just a couple of hundred pounds in 1962. The cost of restoring it was £30,000 and after it resumed operational duties it was in service almost constantly until 2003, by which time some concerns were raised over the condition of the lower deck steel framework and the paintwork was beginning to look a little tired.

Although the tramcar has not formed part of the operational fleet since then, it was a star attraction at the commemoration of the 50th anniversary of the closure of Glasgow’s tramway in 2012 and there are hopes that a fund-raising appeal might generate the further funds that would be required to return the car to service at some time in the future.

Removal of driver’s opening windows and the half drop window at each end together with the ventilator hood over the driver’s cab and the interior cab doors after the war.
Art deco lighting removed from lower saloon in the 1950s.

Sold into preservation for a couple of hundred pounds in 1962.

Much work was lavished on it by volunteers in the early days at Crich, but it underwent a thorough restoration programme with the aid of government funding in 1977-8.
Although part of the operational fleet between 1978 and 2003 it was withdrawn as a result of suspected underframe and bodywork problems.