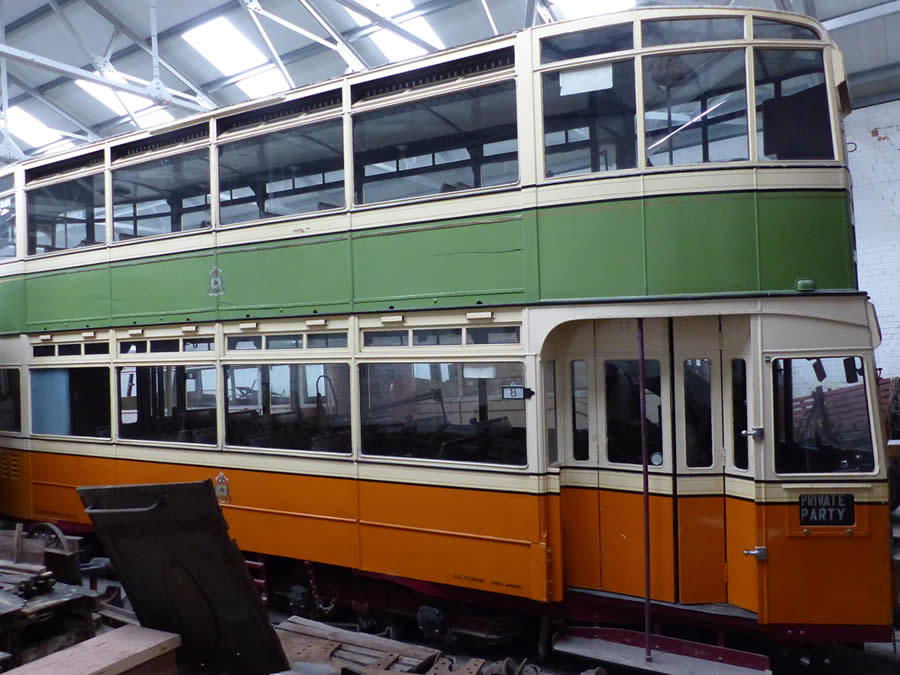 The National Tramway Museum is somewhat unusual in the sense that not only are many of the priceless exhibits regularly pressed into service to show visitors what life was like in the days of the tram, but they owe their survival to the efforts and resourcefulness of the enthusiasts who saved them for preservation and founded the museum in the first place. Only a few trams could be saved and often it was the ‘unique’ or unusual ones that appealed to enthusiasts which passed into preservation.

This posed a problem as the museum began to develop a more rational collections policy in which greater emphasis was placed on more typical ‘mainstream’ tramcars that could illustrate key phases in the tramcar’s evolution and which were therefore more ‘representative’ than the rarities and one-offs beloved by enthusiasts. One tram which illustrates this tension to perfection is Glasgow 1100, which owes its very survival to its ‘novelty value’ and appeal to enthusiasts who were active in the early days of the preservation movement even though it was one of the least typical cars in the Glasgow fleet.

The tram began life as a conventional Glasgow ‘Standard’ double bogie car that was built by the Scottish firm of Hurst Nelson and entered service in November 1928. Just under one year later, however, its original ‘Kilmarnock’ maximum traction bogies were replaced for a time by an equivalent set obtained from J.G. Brill of Philadelphia before reverting to the original type. This was to be just the first of many modifications, though, as the tramcar came increasingly to be used as a ‘mobile test-bed’ for the purpose of trying out various ideas and modifications. The most radical modifications took place in 1940/1 when the car was extensively rebuilt with a view to assessing the feasibility of upgrading Glasgow’s fleet of traditionally built tramcars by subjecting them to a comprehensive modernisation process encompassing bodywork, mechanical and also electrical components. In terms of its visual appearance, the most obvious effect of the rebuild was to replace the original end sections with a more streamlined tapering design incorporating separate driver’s cabins, which somewhat resembled the highly acclaimed ‘Coronation’ class of tramcar (see 1282 for an example) that had been introduced in 1937. Two sets of experimental route colour lights were also installed at this time in an attempt to increase the operational flexibility of the fleet, which traditionally had assigned particular tramcars to specific routes by painting the upper deck panels in one of five colours: red, white, blue, yellow and green.

The tram’s original control equipment was replaced by a new type of Maley & Taunton field control system but this modification proved unsuccessful as it turned out to be sensitive to fluctuations in voltage. This had the unfortunate effect of causing the tram to ‘stall’ on busy sections of the route in response to a drop in voltage caused by the number of cars drawing current, a situation which only rectified itself when the ‘offending’ tramcars were brought to a halt by the obstruction and voltage levels returned to normal.

This prompted yet another modification which involved the adaptation and installation of a third type of control system, this time based on the BTH electro-pneumatic control gear which had recently been adopted for the Coronation class of tramcars. 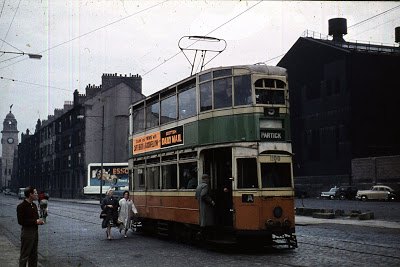 Glasgow 1100 providing a rush-hour service between Partick depot and the shipyards in 1961. Photo: Richard Lomas

The end result was a tramcar whose appearance represented a ‘half-way house’ between the more traditional standard tram bodies produced between 1898 and 1928 and the semi-streamlined cars known as “Coronations” and “Cunarders” that were to replace them in the 1930s and 1950s. As a one-off, however, its outings tended to be confined to morning and evening shipyard specials, though in later years it became a popular tramcar with enthusiasts, who tended to commission ‘special’ or unusual cars for tours of the tramway system in its closing stages. Although it was twice listed for scrapping, the tram somehow survived to the end of the system and, even though by this stage it had been withdrawn from regular passenger service, it was destined to be the last tram to depart from the famous Coplawhill works when it finally left in 1964.

Its intended destination was something of a mystery though it actually ended up, somewhat controversially at the time, in Crich, thanks to the endeavours of a member who was particularly keen to ensure its long-term preservation. After spending some time in storage on site in the open, it made its first proper run on the main line on 24 January 1965, though the process of restoration was not completed until September 1965. 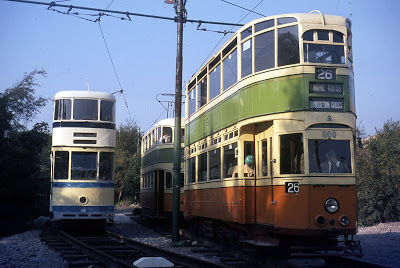 Most of the restoration was undertaken by volunteers though the tramcar was professionally repainted by contractors in the stone workshop during June 1965. Because the overhead line was unsuitable for tramcars with bow collectors during the early days, 1100 was fitted with a trolley pole to enable it to operate satisfactorily. It then ran in service at Crich until 1976, after which it was withdrawn from use and placed in storage. In 2005 the tramcar was removed to the museum’s off-site storage facility, where it remains to this day.

October 1929 original Kilmarnock maximum traction bogies replaced by JG Brill 61E1’s. A pantograph was fitted around this time.
Rebuilt by Glasgow Corporation Transport in 1940/1 in the course of which its body was partially streamlined and an experimental set of route colour lights was installed.
The tramcar received a new set of BTH electro-pneumatic control gear (its 3rd type of control gear) in 1941.

Not known to have run in regular passenger service beyond 2 November 1961.

The tram survived in storage for a time at the city’s Coplawhill works which it finally left in 1964.
Despite being destined for a site in Cheshire the tram ended up at Crich in somewhat mysterious and controversial circumstances.

The tram was restored and repainted in 1965 and ran in regular passenger service until 1976, when it was placed in storage.