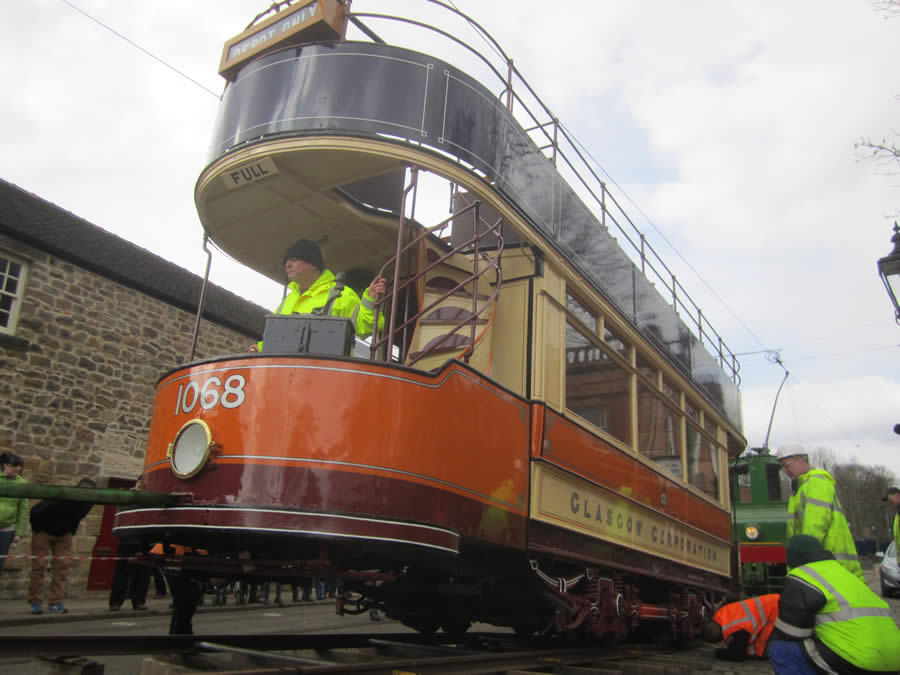 Glasgow 1068 was commissioned and built in 1919 for the Paisley District Tramways Company, where it operated as number 68. Although it was unusual for tramcars of this era to be supplied without a top cover, the existence of a low bridge on one of Paisley’s main routes precluded the adoption of such refinements. Consequently, in its original guise the tram’s lower deck was modelled on tramcars of the LCC’s “M” class (dating back to 1908), with which it shared most of the components After just four years in service, however, Paisley’s trams were taken over by their larger neighbour – Glasgow Corporation – and, like the tramway itself, number 68’s original identity was lost in the process. Effectively it was gradually converted into a Glasgow ‘Standard’ (number 1068) by the addition, firstly, of a top cover with open balconies and vestibules in 1924, followed by full enclosure together with the provision of a new truck and higher speed motors in 1931. Glasgow 1068 on a ‘farewell tour’ of the system. Photo courtesy of Crich TMS photo archive. Date and location unknown.

In this guise it continued to serve as part of the Glasgow fleet until it was withdrawn in 1953 and acquired by the Scottish Tramway Museum Society. The tramcar was briefly exhibited in Paisley for the Golden Jubilee of the town’s tramway and, after a period in storage, it then received an overhaul in Glasgow’s Coplawhill Works before being moved to Crich in October 1960. It was then restored as far as possible in 1966-7 to its original state including its Paisley livery and number. Thereafter, the tramcar operated in service as Paisley 68, at least during fine weather, in most years between 1968 and 2009. During this period the tramcar made a return visit to Glasgow in 1988 where it played a prominent role during the city’s Garden Festival. In addition to transporting many thousands of visitors around the site it also featured in Scottish Tourist Board publicity for the event. Paisley 68 at Glasgow Garden Festival on 1/6/1988. © Copyright Dr Neil Clifton and licensed for reuse under the Creative Commons Licence

In 2009 it was taken out of service for a while, during which time it received a truck overhaul. This respite was only temporary, however, for with the 50th anniversary of the closure of Glasgow’s tramways looming in September 2012, the opportunity was taken to display the tram as Glasgow 1068, albeit in pre-standardised guise. 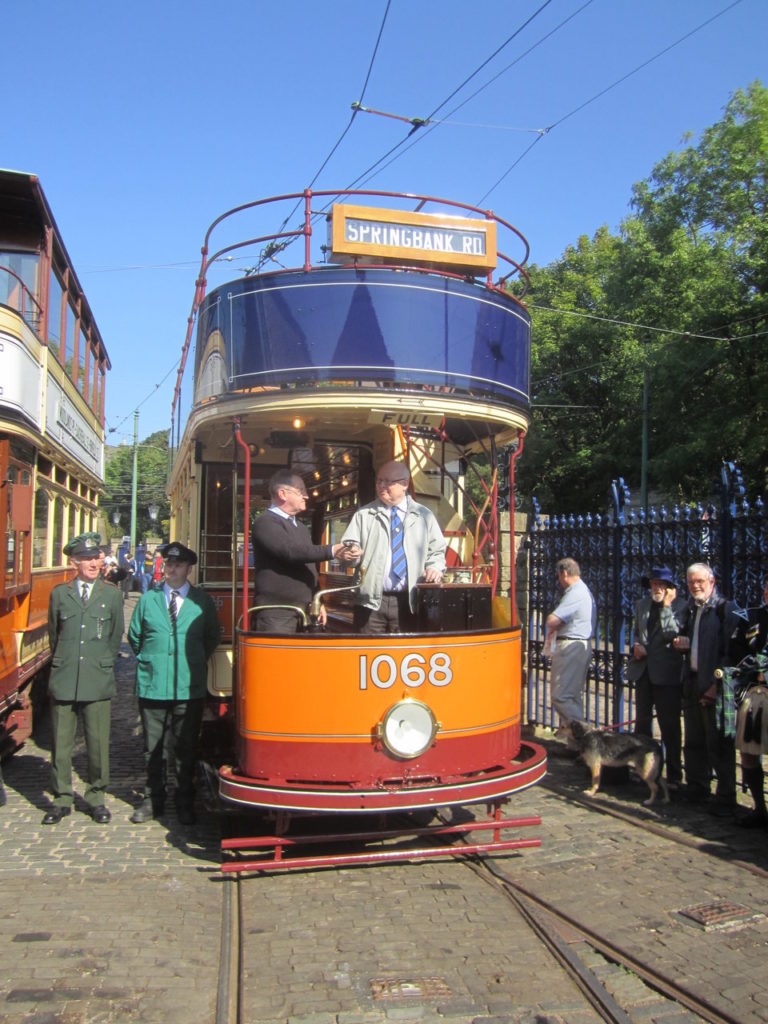 This new livery included the dark blue panels between the decks that it had last sported in the years prior to 1936 following its assimilation into the Glasgow fleet, blue being the route colour for the Hillfoot route on which it operated while based at the Elderslie depot..

Shortly after its transformation the tramcar was dispatched to Beamish for a week in the spring of 2013 to participate in the 40th anniversary celebrations for the living museum of the north.

Rebuilt 1924 (top cover and vestibules added) and 1931 (totally enclosed and given a new truck and higher speed motors).

Initially presented to the Scottish Tramway Museum Society for preservation, the tramcar was briefly exhibited in Paisley for the Golden Jubilee of the city’s tramways and, after a period in storage, was then moved to Crich in September 1960 after undergoing minor remedial work in Glasgow’s Coplawhill Works.

Partial restoration in 1967/8 under the auspices of the Manpower Services Commission Job Creation Programme, as a result of which it reverted to open-topped condition while retaining many of the features it acquired in Glasgow (including non-authentic truck, motors and controllers). In addition, it still lacks the high upper deck railings with which it was originally equipped.
2012 – restoration as Glasgow 1068 involving a change of livery and a truck overhaul, which has allowed it to return to passenger service.

Current status
Restored in operational condition and commissioned for service during the current season
Date started operating at Crich
1978 -as Paisley 68. Operated in 29 seasons, most recently in 2009. Then appeared in 2012 as Glasgow 1068 and has operated in 5 seasons, most recently in 2016.
Total mileage covered at Crich
21,327 as Paisley 68 (plus an additional 3,776 miles at the Glasgow garden festival). And 4,514 as Glasgow 1068. Total Crich mileage is 25,841
Current location
Depots