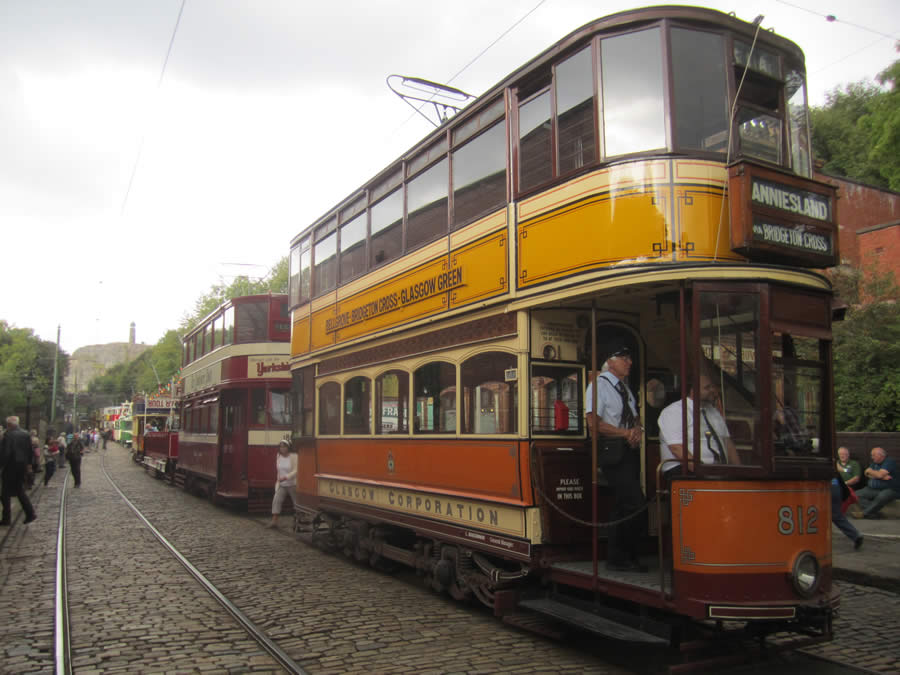 For most people nowadays the term ‘regenerative braking’ is likely to conjure up an image of state-of-the-art hybrid-engined motor vehicles. These attempt to reduce fuel consumption – and also CO2 emissions – by converting kinetic energy (forward momentum) into electrical energy by recharging an on-board electric motor for subsequent use in powering the vehicle.

Few people are probably aware, however, that this innovative approach to energy conservation and re-use was originally pioneered on electrically powered railed vehicles including trams and also on trolleybuses, where the energy that was recovered in braking was either used to feed back into the overhead power line or to provide a form of electrical braking to impede the vehicle’s forward momentum.

Improbable as it sounds – since it was originally built in 1900 in Glasgow Corporation Tramways’ Coplawhill Works as a relatively primitive uncanopied, unvestibuled open-top tramcar – some of 812’s contemporaries came to be fitted with the then highly innovative regenerative braking mechanism as part of a comprehensive upgrade and modernisation process that they received in the mid 1930s.

Glasgow Corporation’s policy over many years was to extend the life of its ‘Standard’ tramcars by subjecting them to a rolling modernisation programme in an attempt to ensure that comfort levels for passengers and crew were not too badly eclipsed by advances in rival motor bus design and technology. So, although 812 was one of the oldest trams in Glasgow’s fleet of over 1,000 ‘Standards’ that were built over a 25-year period between 1899 and 1924, it was progressively modified and upgraded during this period as tramcar design evolved.

Early changes included the addition of a top cover some ten years after its introduction followed, subsequently, by platform vestibules until eventually, by 1930, it had evolved into its current much more modern looking guise as a fully enclosed tramcar. As part of these changes Glasgow Corporation had launched an ambitious programme in 1928 to modernise and upgrade much of the electrical equipment and running gear on its progressively ageing fleet of Standards, beginning with the newest and latest vehicles in the fleet.

With over 1,000 tramcars to modify at a rate of some three tramcars per week the programme took until 1935 to complete, which meant that, somewhat paradoxically, by the time that some of the ‘old timers’ were upgraded they ended up with some of the newest and most advanced equipment in the fleet. For forty of 812’s contemporaries (including 809, 814 and 817), this also included the installation of pioneering technology such as the regenerative braking mechanism.

812 itself was not modified in this way because it was one of the first of the early cars to be upgraded and went through the process in 1930. Even so, 812 did benefit from the addition of high speed motors, air brakes, electric heating, improved lighting and upholstered seating.

It was also equipped at this time with a longer wheelbase truck (of 8 ft wheelbase, compared with earlier 6ft and 7ft versions) and the trolley pole with which it was originally equipped was replaced with a Fischer Bow collector. The upshot of all these improvements was an increase in top speed from a fairly pedestrian 23 mph to a rather more lively 32 mph.

In view of this protracted process of gradual evolution and upgrading, 812 and its contemporaries are thought by some to represent the ultimate development of the classic British tramcar in one vehicle.

Even this was not intended to be the final phase of the modernisation programme, however, as plans were in place to make better use of the modern equipment with which most of the oldest trams had been equipped. Sadly, though, the onset of war put paid to these plans and also ended the process of renewal that had helped to maintain a cheap, reliable and efficient public transport service in Glasgow for over fifty years.

As it was, the withdrawal of Glasgow’s Standard tramcars began in 1939 and number 812 itself might not have survived, but the Suez crisis of 1956, and the fuel rationing that this entailed, gave the electric trams a new lease of life. In the end, 812 was not only reprieved but was also given a final (unscheduled) overhaul, which almost certainly ensured that it would ultimately survive into preservation following its withdrawal in the summer of 1960. The tram was moved to Crich not long afterwards, on 13 August 1960, and it then spent six months standing outside before some protection could be provided and, ultimately, depot accommodation could be constructed and made available for it.

Once electrical operations began, it entered service on 3rd July 1966 and went on to become a very high mileage car.  However, it did receive a major full overhaul in the late 1970s/early 1980s, which involved splitting both decks and overhauling each of them.  This brought the car back to an acceptable standard and, until recently, it remained a heavily used operational vehicle.  It is also unusual in being a very old car that was very heavily modernised in the 1930s for improved levels of passenger comfort and performance.

Although the tram operated with a blue route colour for most of its working life in Glasgow, it was decided to present it as a yellow car at the time of its overhaul as no other original yellow cars were due to be preserved

Number 812 celebrated its 90th birthday at Crich in August 1990, some 30 years after its first arrival, which was just half as long as the period it spent in arduous city service in its home town, where it is estimated to have covered over 3 million miles (compared with just a few hundred miles a year while at Crich). It celebrated its 100th birthday on Saturday 5 August 2000 at Crich, an event that was commemorated with a centenary birthday cake decorated with 812’s image.

In 2015 the tramcar was withdrawn for a much-needed major overhaul, which means that it will probably be out of operation for a little while, until this is completed.

Originally operated with green route colour, changing to blue in 1910. Top deck cover added in 1910 but balconies still open; drivers’ vestibules added two years later. Fully enclosed as part of modernisation programme in 1930. The truck wheelbase was extended to 8ft with roller bearings. Trolley pole replaced by Fischer Bow collector at around the same time.
Upholstered seating was provided (on both decks) in September 1930.

In 1963 the tramcar was painted in 1950s livery.
In 1965 it was decked out with its current yellow route colour.
A substantial body overhaul was carried out in the late 1970s- involving separation of both decks.

Current status
Restored to operational condition but not currently commissioned for service.
Date started operating at Crich
1960 with a break between 1978 to 1981. Has operated in 42 seasons, most recently in 2015
Total mileage covered at Crich
29,090
Current location
Depots