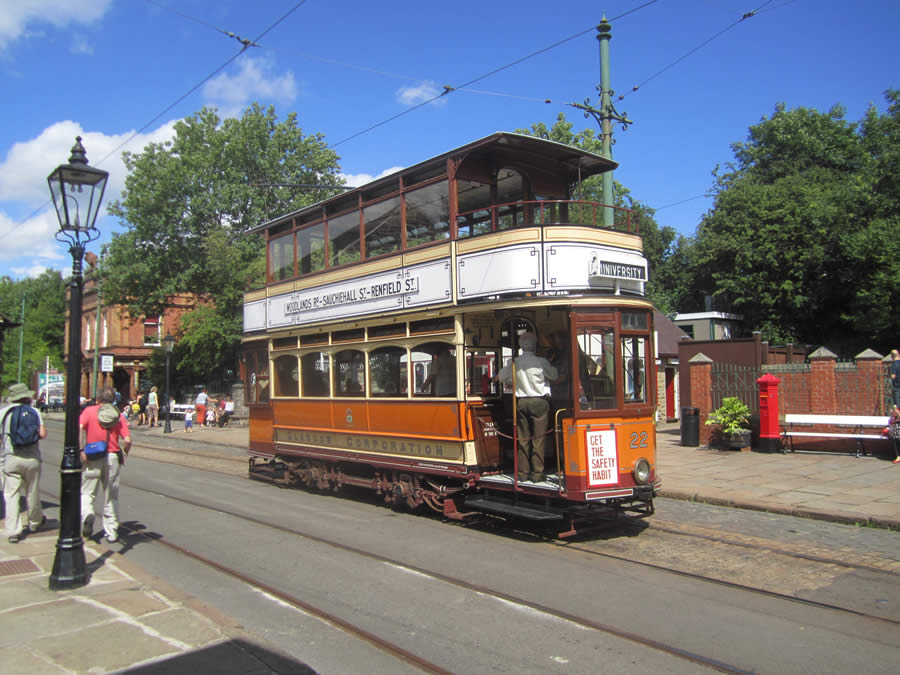 Glasgow 22 provides an interesting example of a traditional four wheeled tramcar, of which there are several at Crich.  Many of these (for example Chesterfield 7) were purchased ‘off the peg’ from established tramcar suppliers and received relatively little modification over the years.  Others, however, such as Glasgow 22, were built in-house by their operators and were often extensively modified over time, thereby acquiring a distinctive local ‘character’ that set them apart from those operated by other tramway undertakings. As one of Britain’s largest tramcar operators, Glasgow Corporation had extensive workshops of its own and, over time, developed a series of tramcars that – because they shared a number of distinctive features – came to be known as ‘Standards’. The Glasgow ‘Standards’ constituted one of the most numerous and successful types of tramcar in the country, the 1,000 or so examples of which were exceeded only by London Transport’s E/1 design.

Although the design of Glasgow’s double deck Standards can be traced back to the origins of the system in 1898, the process involved an ongoing programme of modification and rebuilding, latterly (in Glasgow) to emulate improvements in the design of the bus fleets that provided a constant challenge for all tramway operators.

Glasgow Corporation’s trams employed five distinctive route colours around the upper decks to differentiate services and 22 is displayed with the ‘white’ route colour confirming its allocation to the Mosspark-University service, which also took it past Hampden Park football stadium.

By the time Glasgow 22 came into service in 1922, the already long-running Glasgow Standard cars had already undergone two previous upgrades and the original version that it now exemplifies incorporated open balconies with short balcony roofs and vestibules with storm covers on the top of the stairs. Its predecessors, dating back to the early 1900s, were essentially open-topped cars with very short canopies. During the course of its lifetime, Glasgow 22 (in common with the rest of the fleet) was modified by means of upgrades such as enclosed balconies, upholstered seating, air brakes and high speed motors, from which it has since been partially restored to its original condition. The tram was withdrawn from passenger service in 1960 and escaped the normal fate of scrapping by being pressed into service as a depot shunter at Maryhill depot. It was acquired for preservation in 1962. Before its arrival at Crich, Glasgow 22 was restored to its original condition by a unique collaboration between the municipality and a number of tramcar enthusiasts working together at Coplawhill Tram Works.  This combined effort helped to ensure that 22 was one of the first cars to operate at Crich once the electricity supply was connected for the first time on 6th June 1964.  It also enabled the car to subsequently clock up 45 years of operational service at Crich and 35,656 miles – a service record that is exceeded only by Blackpool 40.

A very brief sequence of Glasgow 22 in operation during the early days of electric tram traction at Crich can be seen towards the end of a 1964 British Pathé newsreel by following the link to:
http://www.britishpathe.com/video/trams-and-tram-museum/query/tram 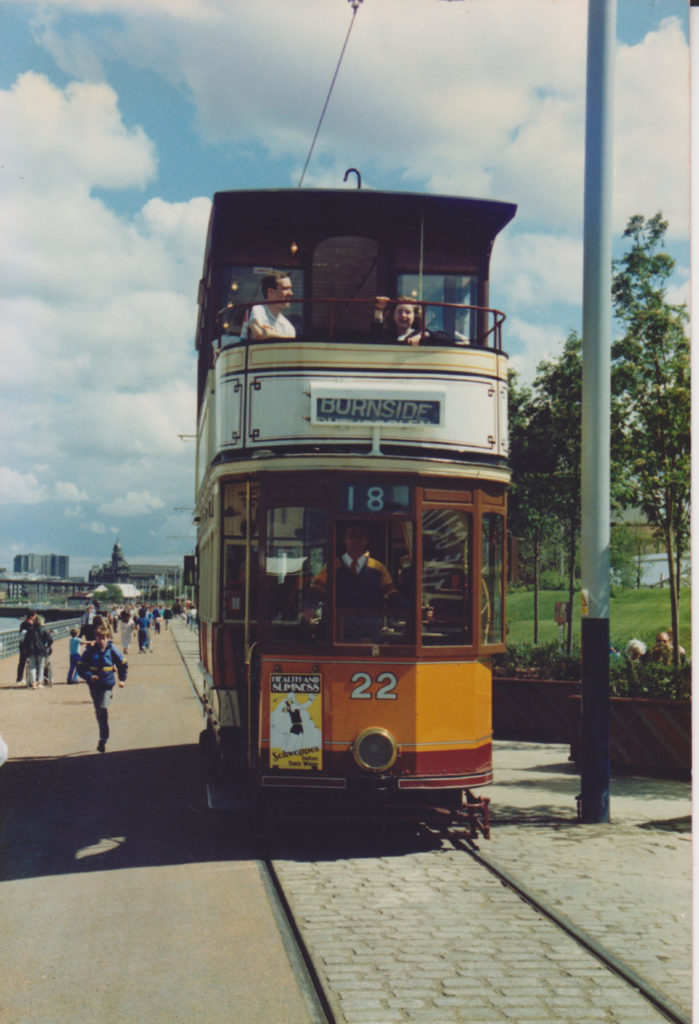 Glasgow 22 at Glasgow Garden Festival on 6/8/1988. © Copyright Rosser1954 and licensed for reuse under the Creative Commons Licence

However, its finest hour during its time in preservation was undoubtedly the sterling service it performed during the Glasgow Garden Festival of 1988, where it not only covered nearly 4,000 miles but also provided the official means of transport for the royal party during the formal opening ceremony on 28 April. 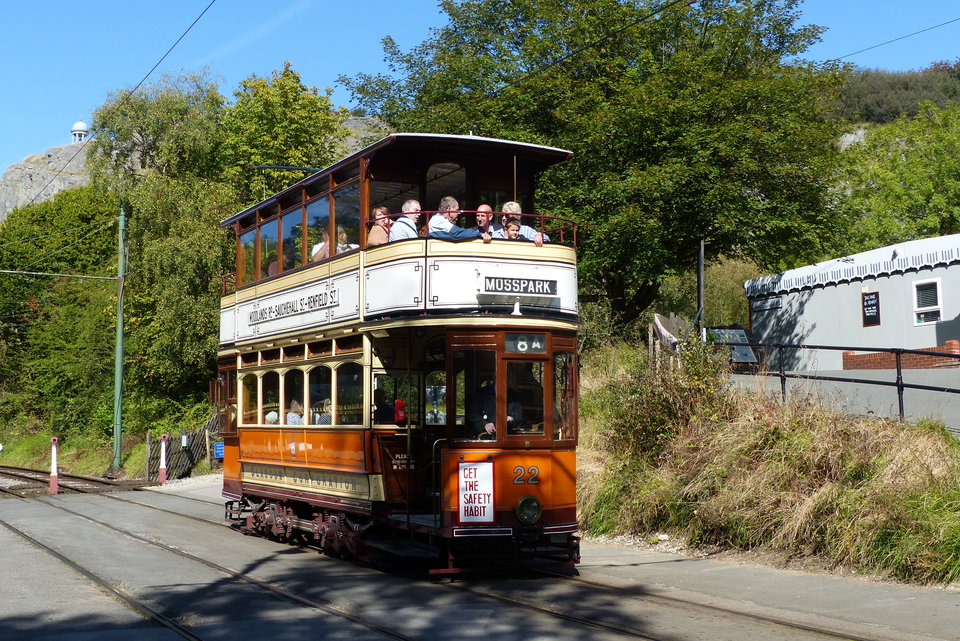 Since then it has been one of the regular workhorses of the operational fleet.

It survived as a depot shunter at Maryhill depot

Largely restored to its original1922 condition, though retaining its final truck and motors. The original storm covers on the top of the stairs have not been refitted.
A substantial overhaul was carried out in the mid-1980s (completed by 18 April 1987) in preparation for service at the Glasgow Garden Festival in 1988.
Motors overhauled and repainted in 2015.

Current status
Restored and operational. Commissioned for service during the current season.
Date started operating at Crich
1964. Has operated in 50 seasons, most recently in 2020..
Total mileage covered at Crich
40,658
Current location
Depots