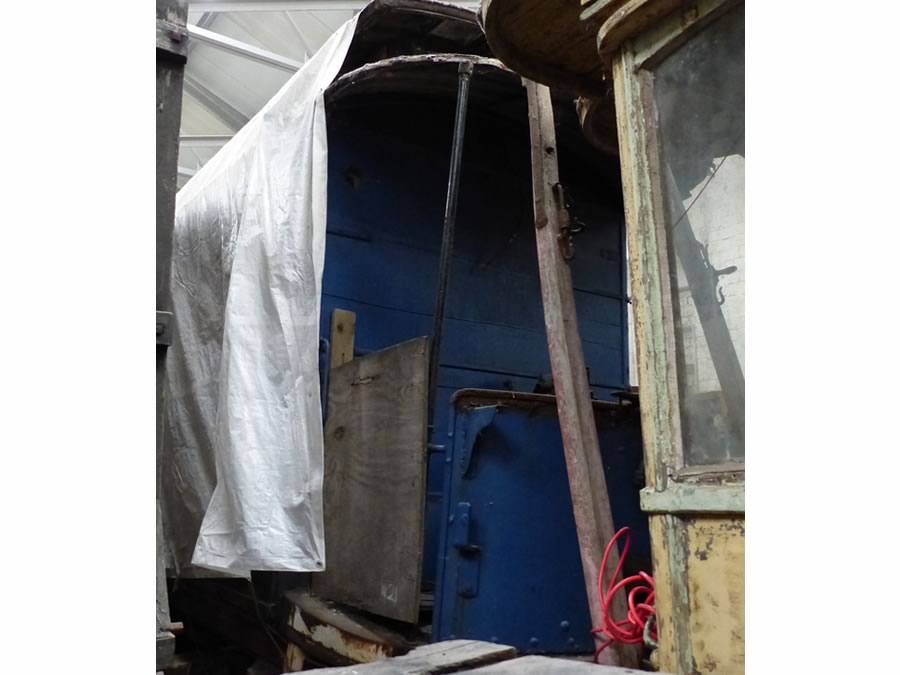 An often overlooked aspect of tramway operations is the tram track itself, or permanent way. Although tram track looks superficially similar to rail track, the form and profiles of the two are slightly different and this difference also extends to the profiles of the wheels themselves. As a result, even though both trams and mainline trains run on track that is nominally the same gauge (4’ 8½”), the difference in profile means that in practice they would not normally be able to operate satisfactorily on the same track.

Ordinarily this was not a problem for first generation tramways as, for the most part, “never the twain did meet”, but Glasgow was an exception. Here, on account of the extensive shipyards around Govan, it was felt to be desirable to transport heavy loads of steel directly from the nearest mainline freight yards to the shipyards themselves using conventional railway freight wagons that were hauled along short sections of the city’s tramway by small electric locomotives (not unlike the museum’s Blackpool electric loco 717).

In order for this to happen, Glasgow adopted the highly unusual track gauge of 4’ 7¾” for its tramways so that railway wagon could run on their deeper flanges along sections of tramway. As a result, all of the Glasgow tramcars that have ever operated at Crich have had to be regauged to the tramway standard gauge of 4’ 8½”. Glasgow 21 is exceptional inasmuch as, alone of all the city’s tramcars represented at Crich, it has retained its original idiosyncratic gauge of 4’ 7¾”, because it has only ever been a static exhibit at Crich.

The tramcar was originally a works car and, as such, formed part of Glasgow’s huge works fleet. Originally built in 1903 by the Corporation’s own workshops, it has features recognisable from the Room and Kitchen single-deckers and doubtless incorporates parts used in the construction of those cars.

Originally assigned No.1 in the Permanent Way Tool Car fleet, it was used to carry the tools used by the track welding teams in the days before Ford Transit vans and their equivalents came to be used. Since these welding teams tended to operate at night, in order to minimise disruption of essential passenger services, this tramcar was unlikely to have been seen by most members of the travelling public in Glasgow.

The city’s extensive fleet of works vehicles – Mains Department, salt wagons, sand wagons, tool vans, water cars and trailers – was initially organised into separate mini-fleets according to the various functions they performed, each of which was given its own series of numbers. Following Glasgow Corporation’s acquisition of neighbouring Airdrie and Paisley tramways in the 1920s, however, the various works cars – including those taken over from Paisley – were reorganised into a single combined works fleet. The Mains Department vehicles (including the museum’s own cable laying tramcar) were allocated the lower numbers and ex-tool van number 1 became 21 in the new combined works car sequence. Like the other works cars in the fleet, it was originally painted in teak or maroon and was lined out in yellow, red and white. Subsequently the tramcar acquired platform vestibules in 1939 and a decade later it was refurbished with new truck, controllers and more powerful motors.

The tramcar continued in service almost until the close of operations, having been withdrawn shortly before the final farewell cavalcades. It was then one of four works cars to be bought from Glasgow, in 1962, by the Tramway Museum Society. Two of these were dismantled for spares shortly after their arrival at Crich, but No.21 performed a variety of static duties in the early years and, in this way, has managed to survive intact. Before the museum townscape began to take shape, No.21 was used for a short while as the bookshop and, for this purpose, was sunk in a specially dug pit so that customers were able to walk into it on the level instead of having to clamber aboard. It then spent a short period on display beside the Town End terminus before being relocated in 1976 to Wakebridge, where it was placed on a piece of genuine Glasgow track as a static display. For many years it enjoyed the dubious distinction of being the only tramcar at the museum to be deliberately stored out in the open whereas the others only did so temporarily while awaiting depot space to be constructed.

Eventually, following a decision to spruce up the Wakebridge area, the tramcar was removed and placed in offsite storage in 2005 though by this stage its condition had sadly deteriorated following its extended period of outdoor display.