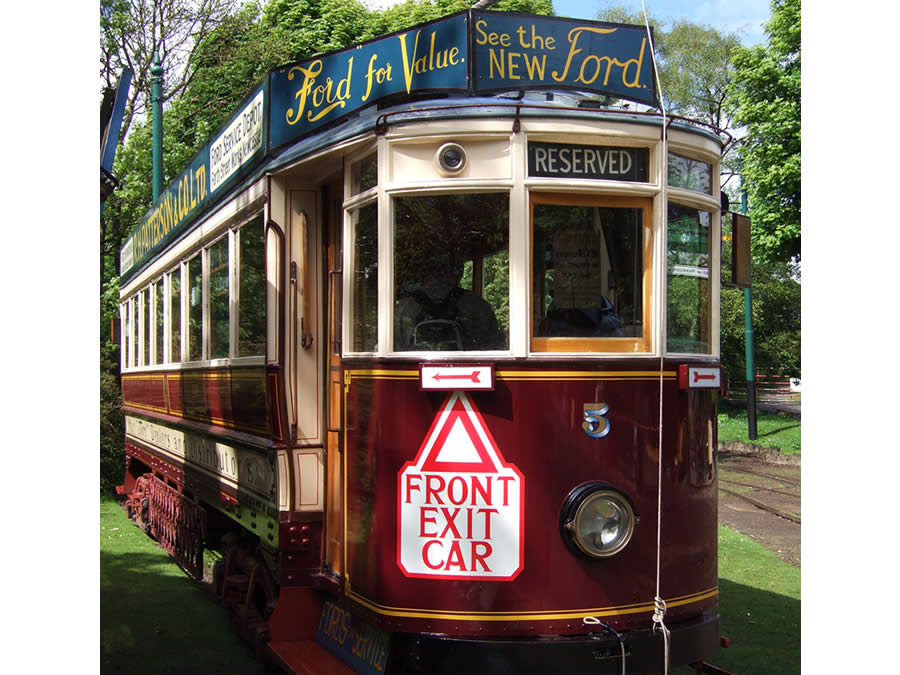 Most of Britain’s first generation tramways were municipally owned and operated, but Gateshead  & District Tramways was an exception.  It was a subsidiary of British Electric Traction Company, which for many years was the largest privately-owned tramway conglomerate in the country, operating upwards of 40 separate tramway systems throughout the United Kingdom and also abroad. 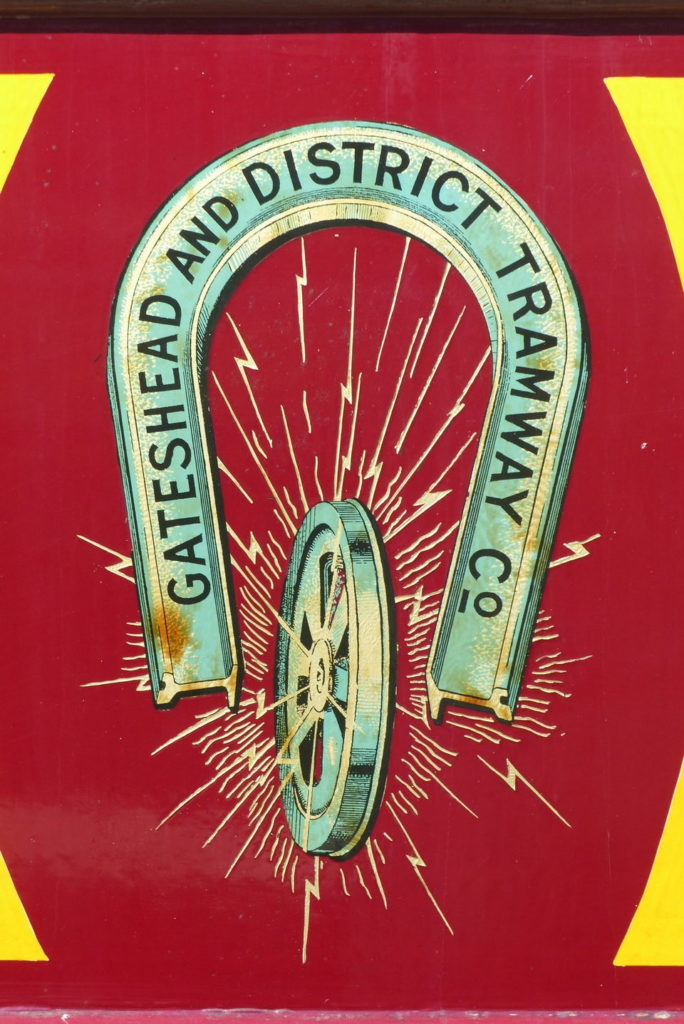 Gateshead & District was an innovative tramway that pioneered many ideas and experiments over the years. The system itself was electrified in 1901 but faced a challenge in that a number of routes serving densely populated areas were unsuitable for double deckers because of the need to negotiate a low bridge near Gateshead station at the nub of the network. The solution they resorted to involved the use of extra long bogie-mounted single deckers with far greater standing capacity than seated. Sister car Gateshead 6 outside Gateshead station. I A Yearsley, 9/8/1949

The first tramcars for the system were purchased from established manufacturers but when Gateshead & District Tramway Co. decided to modernise its fleet between 1923 and 1928 most of the new single deckers were built in-house at its Sunderland Road works.

Gateshead 5 was one of these. Built in 1927, it provided longitudinal seating capacity for 48 and strap-hangers for 40 standing passengers, though as many as 70 standees were known to have been carried. The saloon incorporated separate smokers’ and non-smokers’ compartments with a centre partition.  An unusual feature was the use of reversed maximum traction bogies in which the smaller pony wheels face outwards In order to facilitate the boarding and dismounting of such numbers, an innovative “passenger flow” system was adopted whereby passengers boarded the tram at the rear, using sliding doors that were operated by the conductor and exited from the front using a hinged door that was controlled by the driver. Motorists were warned of these novel front exit arrangements by the large painted panel on both dashes.  In addition, as the door opened, a “Stop/Danger” notice that was fixed to the door protruded from the tram at the same time as illuminated “STOP” signs appeared on the rear dash.

Another distinctive feature of the trams were the very prominent advertising displays mounted on the roof. In the case of cars number 5 and 6 these featured a local Ford car dealer and the same advertisements were carried from the date of entering into service in April 1927 until 1950, not that long before the system closed. Other advertisements were originally displayed both inside and out, the interior ones comprising ornate coloured etched glass panels mounted in wooden frames at the tops of the windows.

In 1950, No. 5 was repainted (without the lining out) and the advertisements removed. No other modifications were made to this tram apart from the addition of twin lights that were fitted to the headlamps together with a mask during the second world war. Gateshead 5 was withdrawn from service upon closure of the Gateshead system in August 1951, the trams being replaced by a fleet of double deck buses that were low enough to negotiate the low bridge by the station. The tramcar was initially purchased by British Railways for use on its Grimsby and Immingham electric railway line, which involved a degree of minor modification. Renumbered as Grimsby & Immingham 20 and painted in its new green British Railways fleet livery, the tram also lost its exterior roof boards and internal ornamental brass fittings; its maple ceiling panels were replaced with white painted plywood; new roof mounted headlamps were fitted to the exterior and saloon heaters installed in the interior.

Following a through overhaul, the tramcar then provided another ten years’ intensive service on a line that operated 24 hours a day for seven days a week.  With seating reduced from 48 to 44, the tramcar conveyed large crowds of workmen – up to 100 at a time – to the docks at Immingham as well as the many factories along the line.  It was eventually decommissioned for a second time a decade later when the Grimsby & Immingham line closed in July 1961.

The car was then acquired by the Tramway Museum Society and brought to Crich in 1963. Shortly afterwards it became one of the early tramcars to move under its own power at Crich in the autumn of 1964 and was then used for a time to store the massive bank of batteries required in order to be able to operate a tramcar in the days before an overhead power supply had been installed.

At this stage it was still in its BR green Grimsby & Immingham livery but between 1965 and 1973 it was gradually restored to its Gateshead condition and livery.  Despite the ongoing programme of work, Gateshead 5 entered passenger service on 3rd September 1966.  In 1978, an upgrading of the workshop facilities at Crich enabled the tram to be given a much-needed mechanical overhaul together with other work including rewiring, roof re-canvassing and repainting.

Currently, Gateshead 5 depicts the livery, interior and advertising boards that might have been associated with a mid-1930s tramcar during the heyday of the Gateshead tramcar fleet. Over the years, this tramcar has intermittently clocked up over a quarter of a century of passenger service while at Crich, but last ran in 2007 and will require some further workshop attention before it can resume passenger operations. 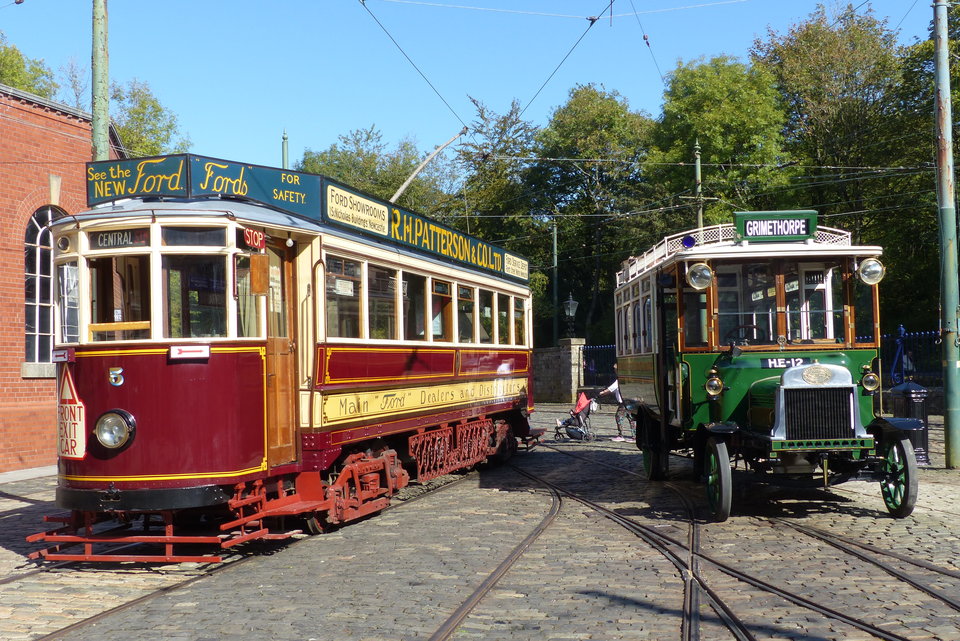 For many years, Gateshead 5 was British Electric Traction’s sole representative at Crich, but that changed in July 2018, with the arrival of a 1913 “combination car” style motor bus that was initially introduced as a tramway feeder vehicle by another of B.E.T’s subsidiaries, Barnsley Electric Traction.  This bus has now been accessioned into the museum’s tramway heritage fleet of vehicles.

From 2021 both vehicles will be on display in the Great Exhibition Hall.

Modification of headlamps and fitting of masks during World War 2. Repainting and removal of advertising roof boards in 1950. Removal of destination boards and ornate brass fittings in 1951 on change of ownership and installation of block board bulkheads with sliding centre door plus repainting in Grimsby & Immingham green livery and renumbering as 20. Roof mounted headlamps were also added, together with saloon heaters and the maple ceiling panels were replaced with painted plywood. The tramcar also parted company with its original bogies at this point.

Bought by British Railways for use on the Grimsby & Immingham line.

Acquired by Tramway Museum Society and brought to Crich in 1963. Restored to Gateshead condition and livery between 1965 and 1973.