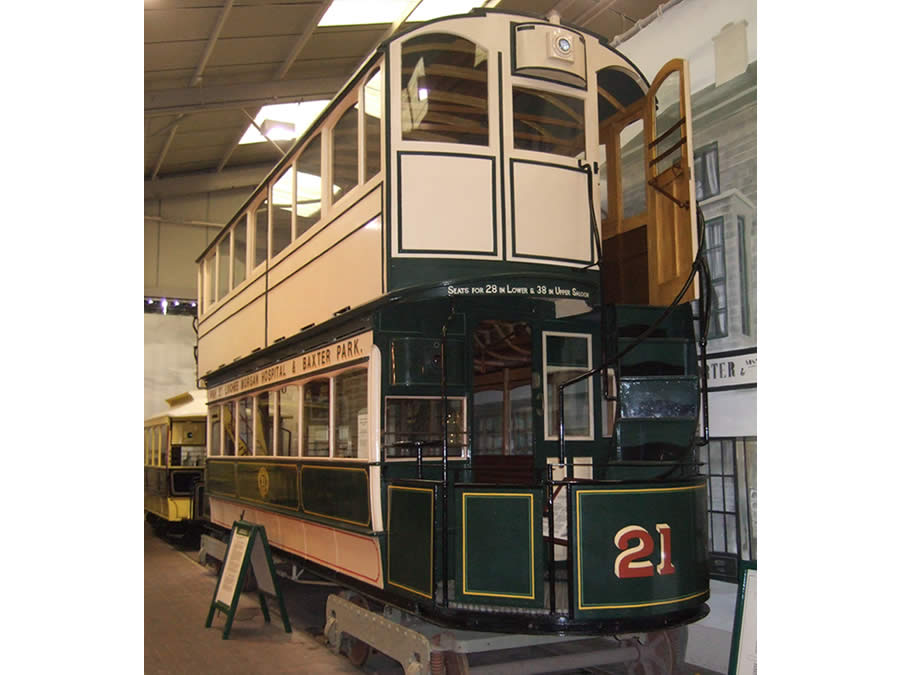 Dundee & District Tramways no. 21 is the only example of a steam tram trailer in the collection at Crich.  As such, it represents an important transitional phase in tramway development between the limited capacity and relatively low-powered horse tramway era and the much greater capacity and increased tractive power of the large  bogie tramcars that emerged during the electric tramway era.

Horse trams had to be small and light enough to be pulled with a full complement of passengers and, for this reason alone, seating capacity was generally limited to between 20 and 30, even on double deck cars. Even then, additional horses were normally required for any hilly sections of track while steeper gradients were normally ruled out altogether. In addition, horses were expensive to house and maintain and needed regular rests. They also had a relatively short working life and were prone to disease. Photo of Dundee 21 in service, courtesy of Alan Brotchie.

Steam trams provided a reliable means of overcoming such drawbacks and, in so doing, enabled tramways to operate in much more challenging terrain while transporting many more passengers. This opened the way for tramways to develop in many of Britain’s northern industrialised hill towns for the first time.

A Board of Trade stipulation preventing steam tram locomotives from hauling more than one trailer meant that these were typically designed to accommodate as many passengers as practicable, in order to maximise their operational efficiency and hence, also, their profitability.

Dundee trailer 21 illustrates this type of design perfectly, with its sturdy bogies placed at each end of a relatively long saloon incorporating a straight steel underframe.  This seven-bay saloon had sufficient seats for 66 passengers.

One of the drawbacks of such a design was the very high platform with its corner steps (currently missing from Dundee 21) – not at all forgiving for those with mobility problems! But at least upper deck passengers were provided with a top cover, which was partly intended to protect them from the elements, but mainly also from the inevitable sooty emissions from the locomotive’s exhaust.

Dundee’s steam tram engines were supplied by Leeds-based Thomas Green & Sons.  The first steam trams they supplied were built under licence to a design patented by Wilkinson, which incorporated a vertical boiler and vertically mounted engine (similar to MBRO 84, which is also in the collection).  Later models, however, were built to Green’s own design, which featured a horizontal boiler and inclined cylinders.

Dundee & District Tramway trailer no. 21 was constructed by G.F. Milnes & Co. of Birkenhead in 1894 and similar types were also to be found in Huddersfield, Leeds and East Lancashire.   Although the trailer was only in service for approximately ten years, there is evidence that it may have carried as many as four different liveries during this period.

Starting in 1885, steam trams gradually replaced horse traction on all but one route in Dundee, but towards the end of the nineteenth century the days of the steam tram were themselves numbered as local authorities started to take over the operation of tramways from the private companies that had usually built them.

Dundee Corporation was unusual insofar as the Corporation had initially built the tram tracks but then leased them to tramcar operators who provided the service. However, the Corporation took full control of the tramway in 1899 and made an immediate start on electrifying the system since this new form of traction provided a number of operational and financial advantages.

Electric traction not only provided instant power (unlike steam trams, which had to be ‘fired up’), but also enabled the traction unit to be integrated with the passenger accommodation itself, which achieved significant construction savings. Body of Dundee 21 on the shore of Crombie Reservoir. Photo: Alan Brotchie, 1962.

Newly redundant steam tram locomotives and trailers were mostly disposed of. Most of the trailers were sold by auction from Lochee depot on 24 July 1902, which is how the lower saloon of trailer number 21 came to be relocated to the shores of the Crombie reservoir, where it spent the next 60 years providing shelter for fishermen. Eventually it was discovered by enthusiasts, who took it into preservation in 1963 and embarked on the lengthy and painstaking process of restoration and renewal.  All that was left of the tramcar by this stage was the lower saloon with canopies, all of which needed to be refurbished.

A pair of cable tram bogies were acquired from an ex-Douglas cable tram of 1896, while new staircases and top covers had to be made from scratch together with many other components.  Much of the work was carried out at Marton Moss, near Blackpool with funding provided by the Tramcar Sponsorship Organisation and the Tramway Museum Society.  All these efforts eventually culminated in the revival of this important landmark in the development of British public transport.

One outstanding challenge that remains to be tackled relates to the tramcar’s braking system since there were many different variants and each type had to be compatible with the type of locomotive providing the traction.  For this reason, the trailer has never operated in service since arriving at Crich.

Although steam trams themselves were swiftly displaced by their electric counterparts, elements of the trailer design were nevertheless incorporated in many of their successors. They included the use of bogies, which enabled much larger tram bodies to be constructed, thereby maximising their payload. Other tramcars at Crich – notably Blackpool 59 – share many of their design features with their steam-era predecessors such as Dundee 21. 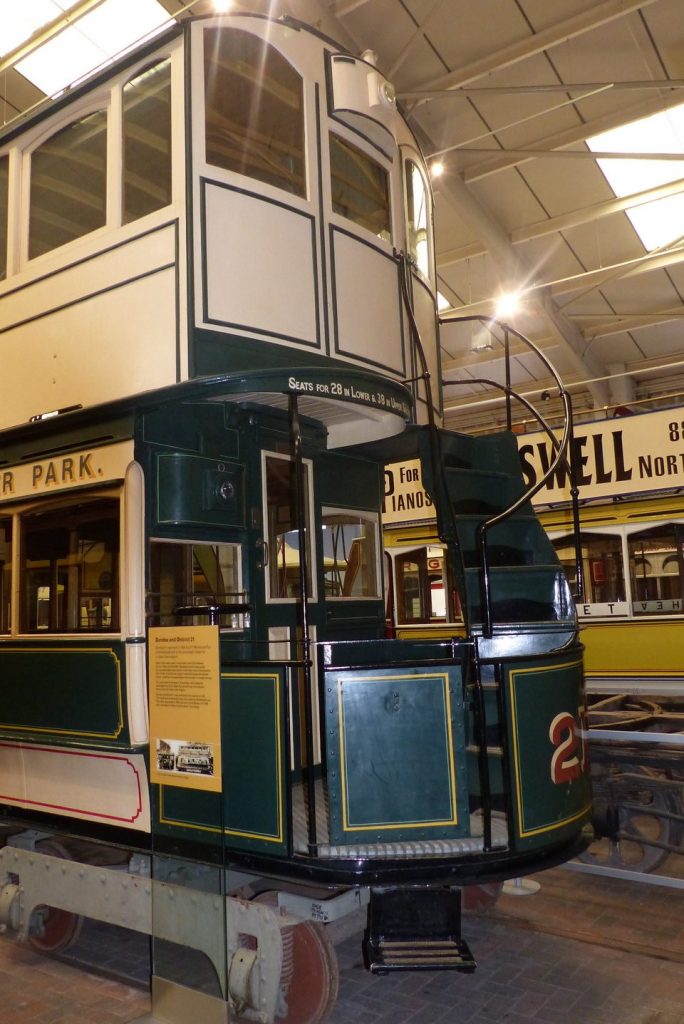 Mind the gap! Steam tram passengers needed to be reasonably fit and agile in order to climb on board. Photo: Jim Dignan, 28/6/2018

Lower saloon taken to Crombie reservoir, north-east of Dundee, for use as a fishermen’s hut.

Removal to Blackpool in 1969; where restoration commenced on the body of the tramcar while it was in open storage. Removal to the museum’s off-site storage facility in 1980 for further restoration work to be completed under cover. A further move, to Bolton, also took place before the restoration was finally completed in 1989.

Current status
On display. Mechanically incomplete (in particular the braking system), it has never operated at the museum.
Current location
Exhibition Hall