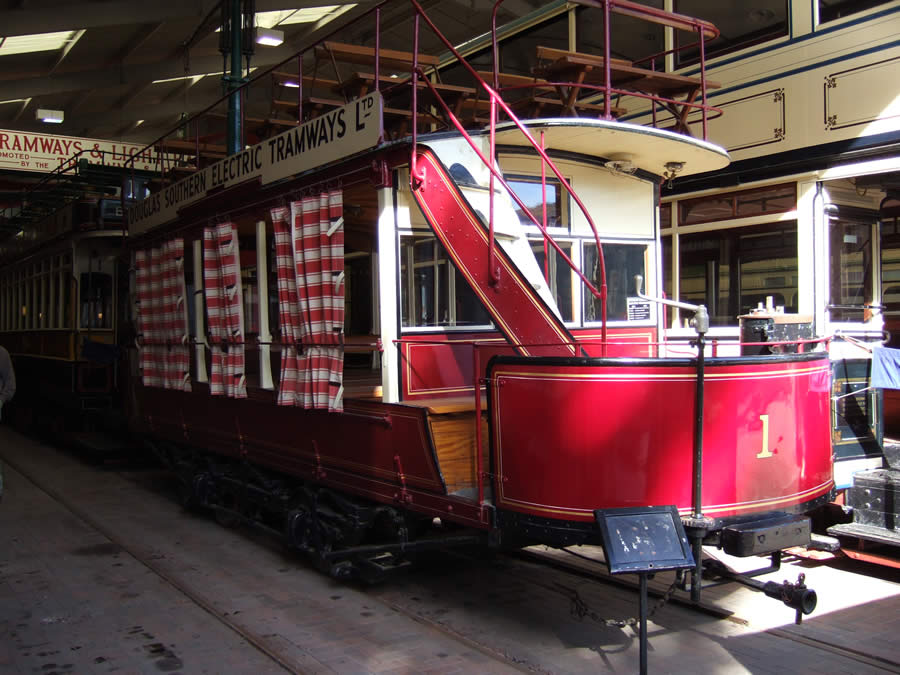 The tram was originally commissioned for Douglas Southern Electric Tramway, which ran along the very dramatic Douglas Marine Drive that was excavated along a ledge on the sheer cliff face between Douglas Head and Port Soderick, a distance of 3.5 miles. The tramway was single track with passing places and at each end of the route short inclined railways carried passengers to and from the termini.

The tramcar was built by Brush in 1896 to an unusual design, being a double deck ‘toast-rack’, an open top car with short canopies. Although the body was English, it was placed on a ‘Lord Baltimore’ truck that was imported from the United States.

The use of cross-bench seating in the open-sided lower saloon together with transverse garden seats on the open upper deck provided an unusually high seating capacity of 75. This was very suitable for the seasonal tourist service that the tram provided but may also reflect an era in which many passengers would have been less amply proportioned than some of their present day contemporaries. Another unusual design feature is that access to the tram was from the seaward side only, which explains why both sets of stairs are on the same side of the car and the trolley mast is also displaced on what would have been the ‘landward’ side. Canvas blinds were added later to give a degree of protection from the stiff sea breezes.

Unusually for a British tramway (though not the Isle of Man) the number of passengers that could be accommodated was also increased by the regular use of trailers and the Douglas Southern Electric Tramway eventually operated a fleet of eight motorised tramcars together with an equal number of trailers.

In the early days the tramway company was a separate entity from the Douglas Head Marine Drive Company, which owned the roadway and received a payment of one penny per passenger together with a share of the takings. When the franchise to operate the tramway expired in 1926, however, the two companies amalgamated under the title of the Douglas Head Marine Drive Company Ltd.

Tramway operations had ceased for the duration of the first world war and the system was once again moth-balled on the outbreak of the second world war in the expectation that operations would re-commence once hostilities were over. Sadly, however, changing tastes in leisure pursuits and tourism meant that the tramway never re-opened and the company’s assets were sold to the Isle of Man Highways Board once the war was over.

Although the tracks were lifted in 1946-8, the remotely-situated depot at Little Ness, together with its fleet of 16 tramcars survived as a ghostly ‘time capsule’ until 1951. Eventually, the depot and all its occupants were unceremoniously scrapped on site but shortly before this happened, in June 1951, DHMD 1 was rescued in the nick of time by a member of the Light Railway Transport League (F K Pearson), who persuaded the IoM Highways Board to undertake the challenging feat of extricating and removing the car. After a period in storage on the Isle of Man, the car was moved in 1956 to the British Transport Museum in Clapham, where it was expertly restored and put on display. When this museum closed in 1964, responsibility for the car passed to the Science Museum, which made it available for display at the TMS site in Crich in 1975.  It made its initial test run on 20th April of that year. In May 1997 the Science Museum agreed to transfer ownership of the car to the TMS in recognition of Crich TMS’s unique relationship with the tramcar and the high degree of professionalism shown by the TMS in developing the museum. DHMD 1 is the oldest electric tramcar in existence that has never been rewired. So although it has been restored to working order, it is likely to remain as a largely static exhibit in view of the pioneering – and irreplaceable – state of its mechanical and electrical equipment. Nevertheless, it has made the occasional sortie from the Exhibition area, one such instance being the commemoration of the 25th anniversary of the Tramway Museum Society in 1980. 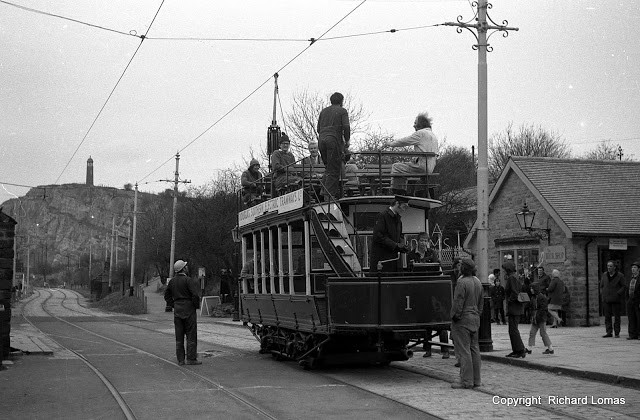 DHMD 1 making an exceedingly rare foray under its own power shortly after its arrival. Photo: Richard Lomas, April 1975

Moth-balled in 1939 at the outbreak of war

Transferred to Museum of British Transport in 1956 and restored.

Conserved for display purposes only