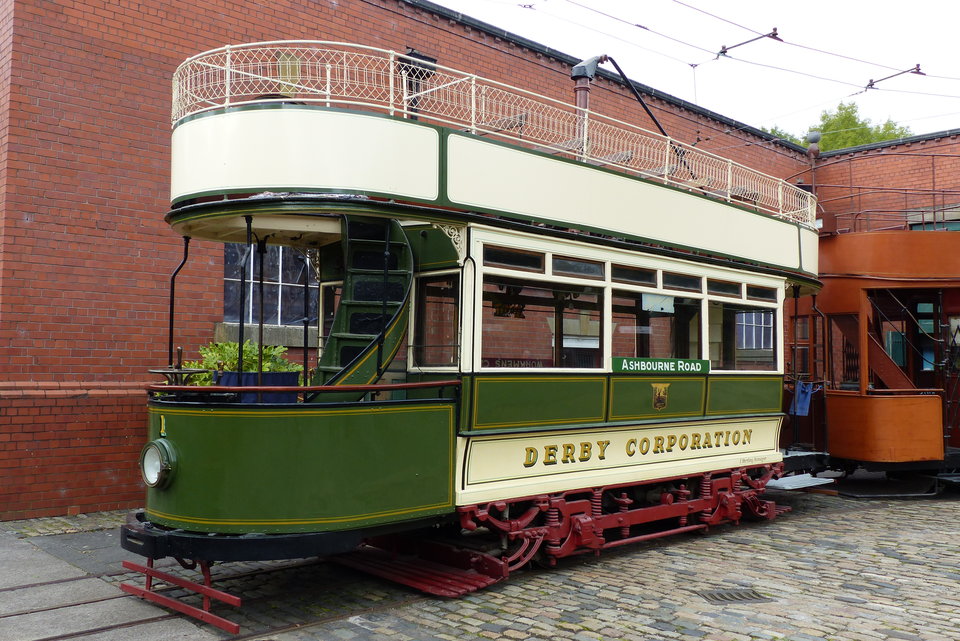 Derby 1 was built in 1903 at nearby Brush Electrical Engineering Co. Ltd., of Loughborough, just down the road from Derby itself. A horse tramway had existed in Derby since 1880 but, after taking it over in 1899, Derby Corporation set about improving and electrifying the four foot gauge network, which by 1908 had been extended to 14 miles in length. Delivered to Abingdon Street depot in December 1903, it was first used as a crew training vehicle and to test the infrastructure before the formal opening of the system on 27 July 1904. The tram then continued in regular service until 1933, by which time a top cover and vestibules had been added in 1928.

A fascinating feature of these early tramcars was the installation of an electricity meter that not only showed the tramcar’s performance, in terms of the amount of electricity it took to power it, but also the performance of the driver.  Current could be saved by ‘coasting’ the tramcar rather than continuing to draw electricity on flat and downhill stretches and, in order to encourage this, drivers were periodically paid a bonus (sometimes called “Juice Money”) according to how much power, and therefore money, had been saved.  Not all operators installed them but Blackpool and Chesterfield, in addition to Derby, were among those that did. 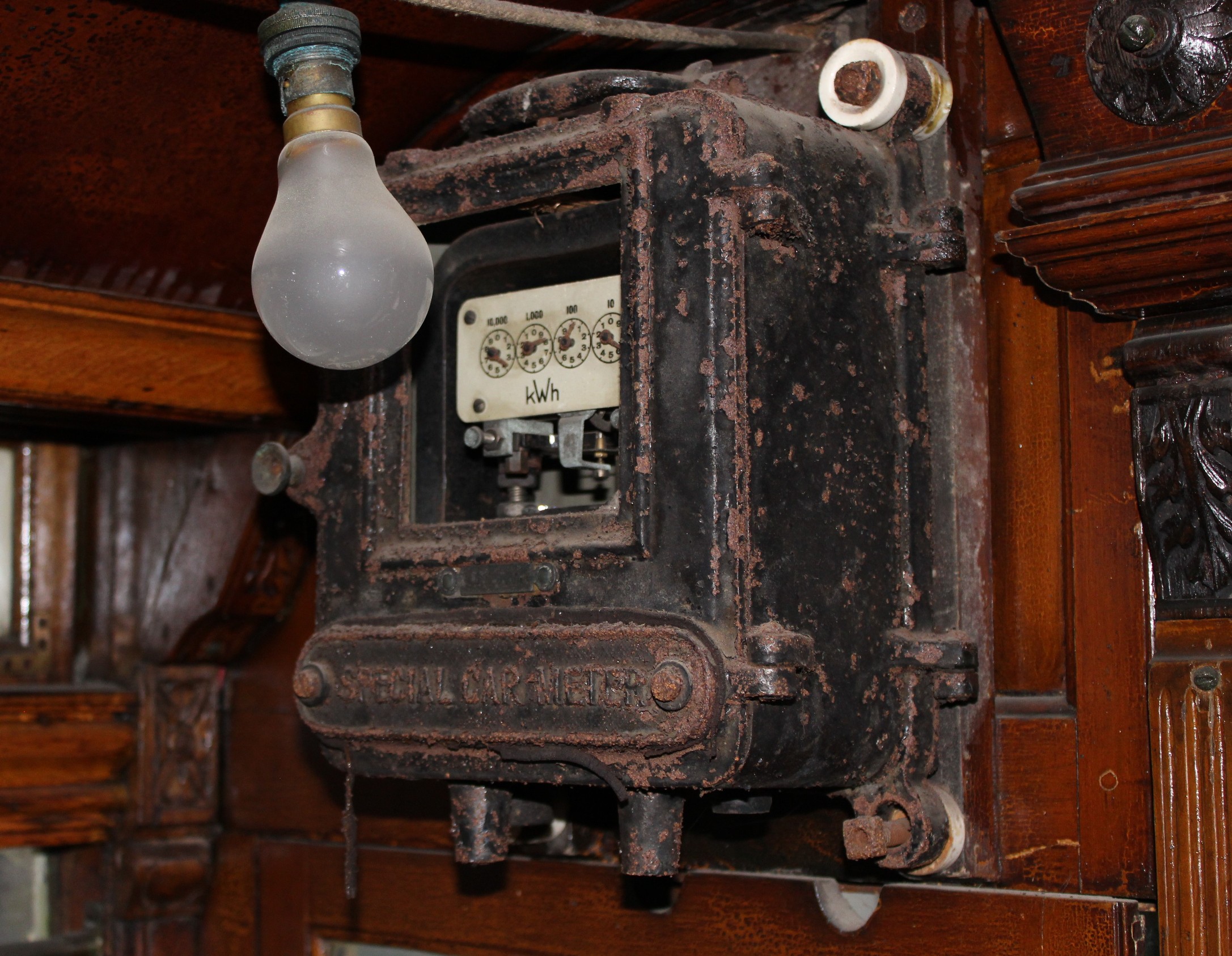 Derby 1’s electricity meter, which monitored the performance of both tramcar and driver! Photo: Paul Abell, 2/5/2021.

It spent the latter part of its life on the Nottingham Road and Kedleston Road routes and was recorded as having covered 660,390 miles by the time it was pensioned off in September 1933, ten months before the last Derby tram route was replaced by a trolleybus system. Fortunately for this particular tram, the lower saloon was sold off for use as a summer house in Mickleover, where it remained for almost 30 years before being acquired by the Derby Tramway Group in 1962. The upper part was reconstructed from parts salvaged from about a dozen old tram bodies that had belonged to trams from Derby, Nottingham and Leicester. Some advertising panels that had formed part of the decency panels on the upper decks of open-topped tramcars of this type were found separately by a sharp-eyed tramway enthusiast who spotted an unusual windbreak on some nearby allotments. The truck was originally bought from Blackpool Corporation for a project to restore a Nottingham tramcar (no. 67). 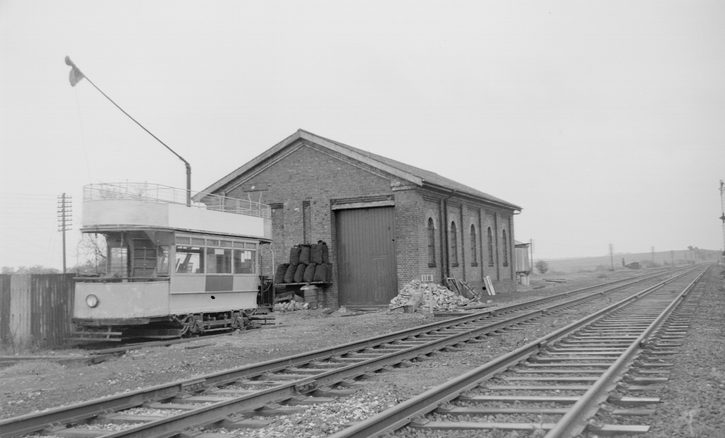 After initial restoration and display at the short-lived East Midlands Transport Museum near Nottingham, the tram itself was later acquired by the Tramway Museum Society and moved to its off-site storage facility in 1970, where it remained in store for the next 20 years, before taking its place in the then newly opened Exhibition Hall in 1991 after a cosmetic repainting.

The tram has never operated at Crich since it was originally built to the narrower four foot gauge, though when it was cosmetically restored it was re-gauged and placed on a standard gauge truck that was obtained from the ex-Blackpool “Gondola” illuminated car, which  made it possible to exhibit it together with the rest of the collection in the Great Exhibition Hall. 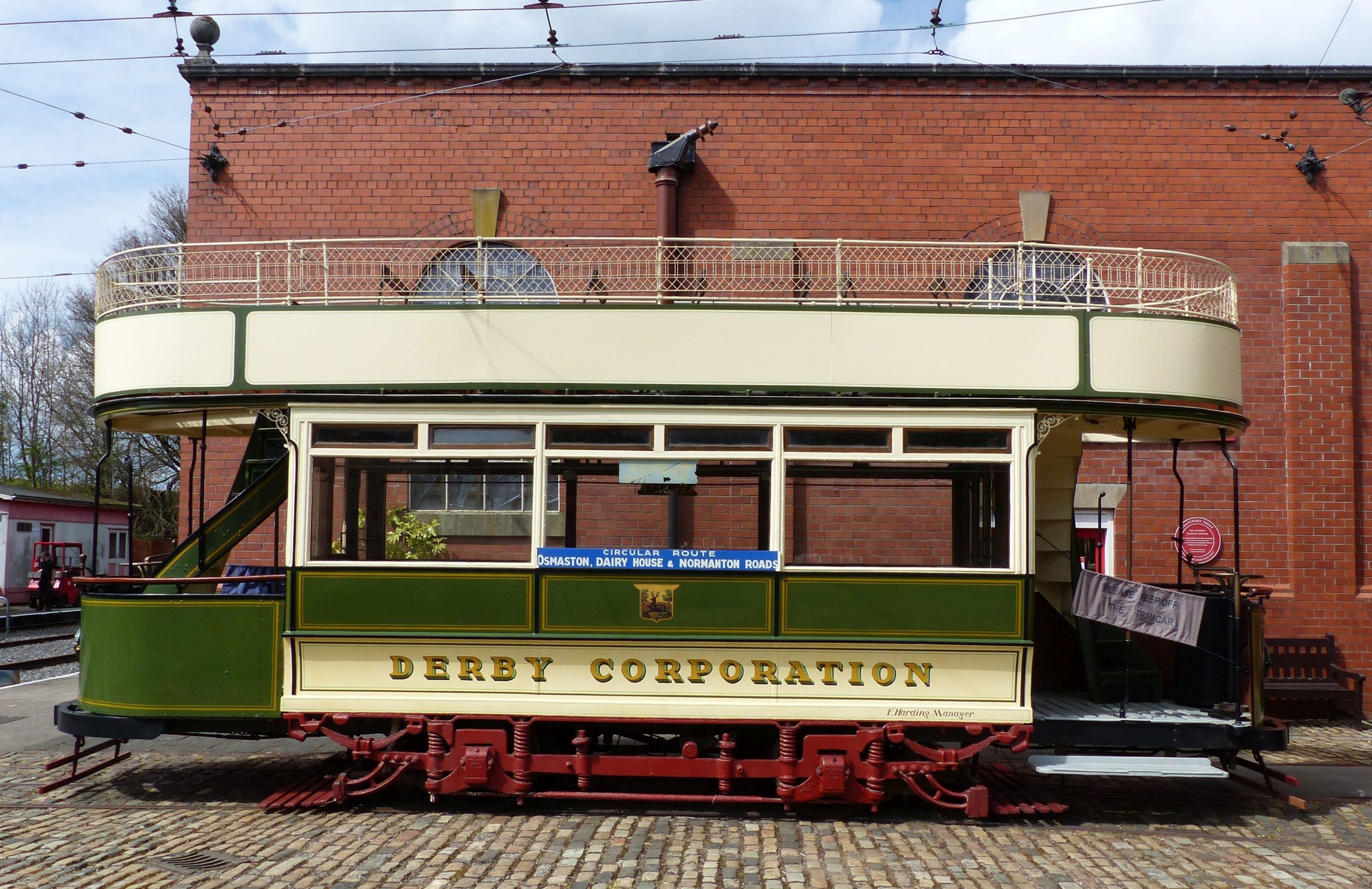 Derby 1’s last public appearance at Crich for a while took place on 2/5/2021 shortly before it was due to be placed in storage for the time being. Photo: Jim Dignan

Its spell in the limelight came to an end on 11th June 2021, however, at least temporarily, as the tramcar restoration programme and consequent constraints on space in the workshop necessitated a reorganisation of the contents of the Exhibition Hall. 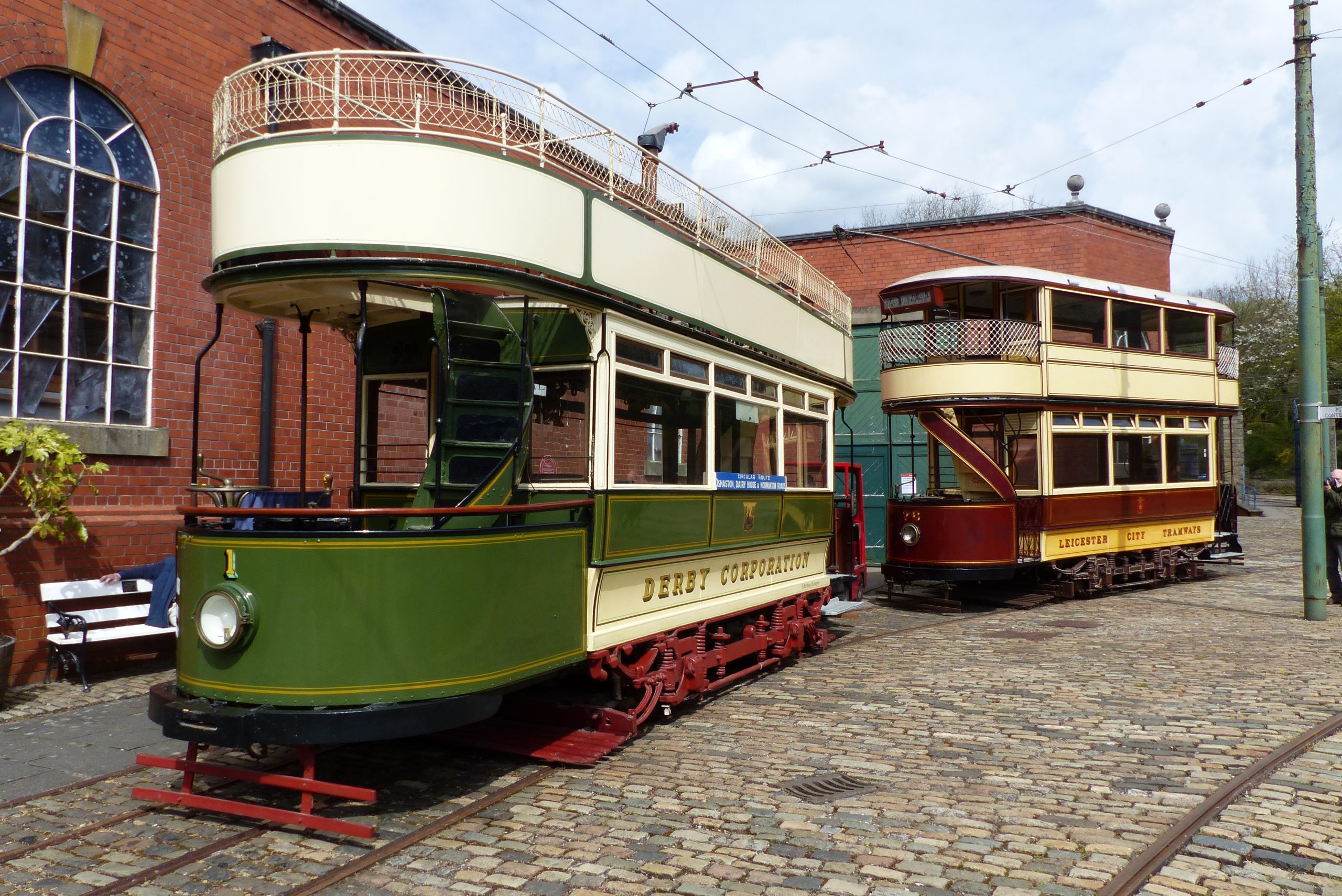 Two Midlands tramcars, Derby 1 and Leicester 76, photographed on a rare outing together on 2/5/2021. Photo: Jim Dignan

In order to free up sufficient space for Blackpool 298 to return to the museum for its long-awaited restoration to begin, Derby 1 had to  take its place in the museum’s off-site storage facility at least for the time being.