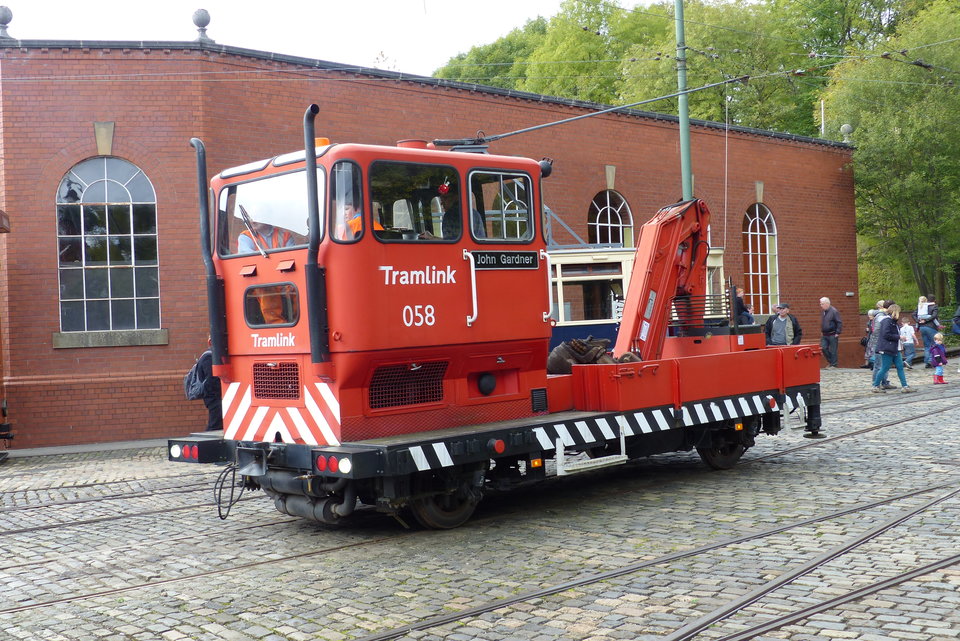 The newest vehicle in the museum’s collection is not, technically, a ‘historical artefact’ in the sense that most of its tramcars are; nor is it, even, a tramway vehicle at all in terms of its origins.  Nevertheless, it is a very useful addition to its fleet of operational vehicles.

In fact, works tram 058 and its trailer 061 are the only representatives of a second generation tramway to have found a home at Crich to date, though their connection with Croydon’s Tramlink was both tenuous and short-lived.  Both vehicles were designed and built in 1978 for the German state railway company Deutsche Bahn, which operated them as general purpose track construction and railway maintenance vehicles.  They were originally numbered DB Netz 53 0692 and 0692-3 respectively.

Unlike most other vehicles in the museum’s fleet, Tramlink 058 is powered by a four- stroke diesel engine with mechanical transmission powering the two axles.  This enables it to operate at a maximum permissible speed of 70 km per hour.  The ‘tractor’ unit is equipped with a hydraulic ‘Atlas’ crane, which is powered by the unit’s engine.  This enables heavy and awkward loads to be lifted and moved with precision.  Other attachments can also be fitted to such vehicles, such as weed control equipment.  It has a ventilated weather-proof cab that provides accommodation for a crew of six.

The accompanying flat bed trailer offers a large payload.  Moreover, the specially recessed design of the ‘engine’ compartment enables even long materials such as rails to be transported.  This makes it an ideal construction and maintenance vehicle for railway or tramway undertakings.

As the largest railed transport undertaking in the world, the DB company operates an extensive fleet of works vehicles and 058 belongs to a large class known as Klv 53.  Between 1963 and 1994 no fewer than 824 vehicles of this type were produced, making it the most numerous railed works vehicle to have been produced by Sollinger Hutte.  With their distinctive yellow livery, they were certainly ubiquitous on the extensive German railway network for many years.  [The most numerous railed works vehicle in Britain was the Class 08 diesel-electric shunter, 996 of which were produced between 1952 and 1962].

By the early 1990s, however, a replacement design had been introduced and Deutsche Bahn began withdrawing or selling off many of the class Klv 53 works vehicles as part of a general drive to streamline and reduce the cost of its operations.  058 was offered for sale in August 2005 and was acquired the following year by Croydon Tramlink, a second generation British tramway that began passenger operations in May 2000.

Two motorised engineering trams – 058 and 059 – were obtained by Tramlink together with three four-wheel flat wagons, which were renumbered as 060, 061 and 062.  The significance of the numbering sequence is that these numbers followed on from the numbers used for the works car fleet operated by London Transport during Britain’s ‘first generation’ tramway era.

The vehicles were given a major overhaul in 2006 and were initially painted in the original London Transport red livery.  The rationale for their acquisition was not entirely clear, however, and they do not appear to have been extensively used by Tramlink.  In March 2008, Croydon Tramlink was taken over by Transport for London and, not long after this, 058 and flat-bed truck 061 were sold on to the Tramway Museum at Crich.  By this stage, however, they had been repainted in a new green livery. 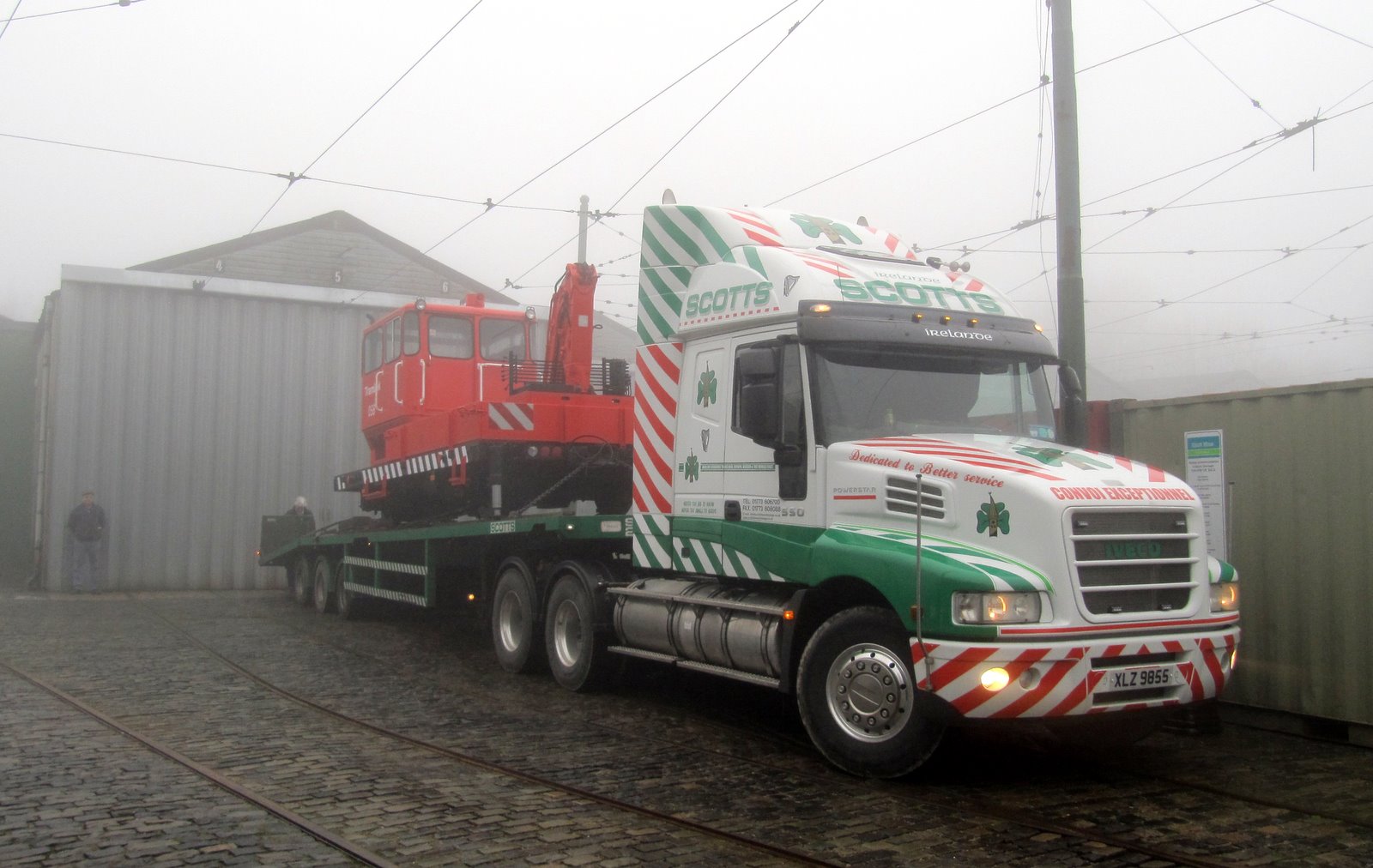 058 arriving at Crich on a very misty morning in January 2010. TMS archives.

The works tram and its trailer were repainted in their previous London Transport red livery and arrived in January 2010 at Crich, where they were adapted for use at the museum.  This mainly involved re-profiling of the wheels and a number of minor repairs.  A replacement clutch was fitted in May 2017, after which the vehicle was ready to enter service.

In a break with tradition, 058 has also been given a name-plate in addition to its number.  It has been named after an early TMS member – the late John Gardner – who made a very valuable contribution to the development of the museum in its early years.  As he also had a particular interest in rail-mounted cranes, the name is fitting.  The plaque was unveiled in November 2015. 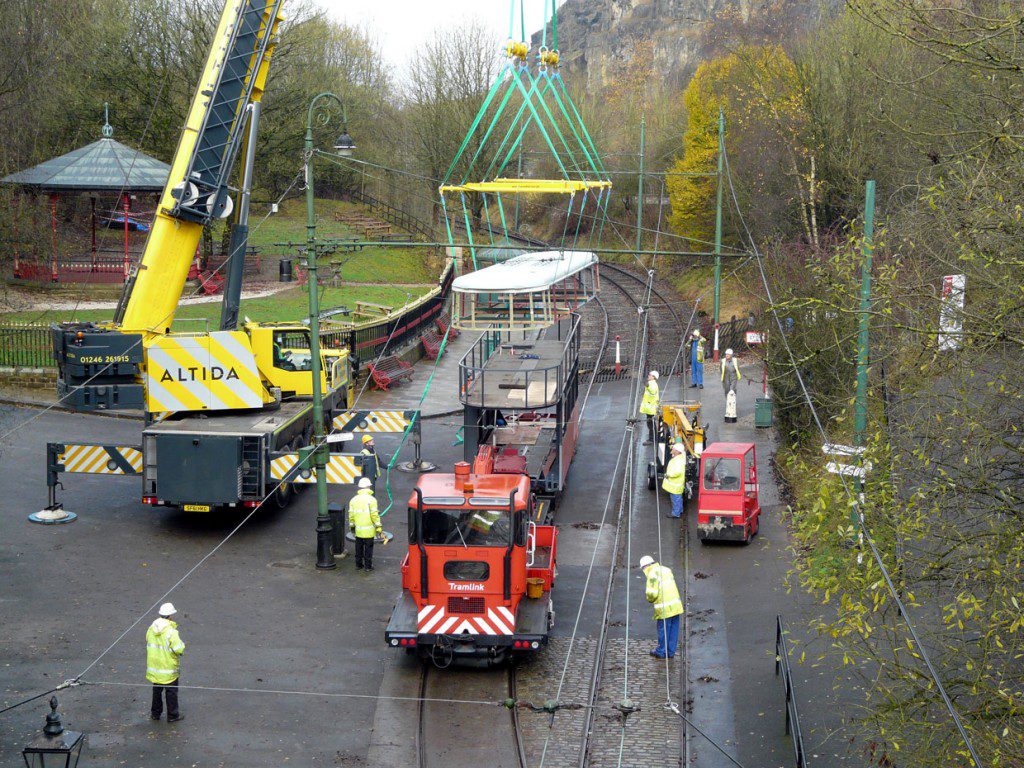 068 and 061 in action, showing the kind of work for which these vehicles are ideally suited. TMS archives.

As heavy duty general purpose maintenance vehicles, 058 and its trailer are likely to be useful additions to the museum’s fleet, one important advantage being that they are capable of operating even when the electric power supply is out of action.  This would enable 058 to retrieve trams from anywhere on the tracks in the event of a power failure.  More importantly, it is the only vehicle powerful enough to recover the very large passenger tram Blackpool 762 in the event of its failure.  So, the acquisition of 058 was an essential precursor to the commissioning and operation of 762 following this tram’s arrival in 2011. 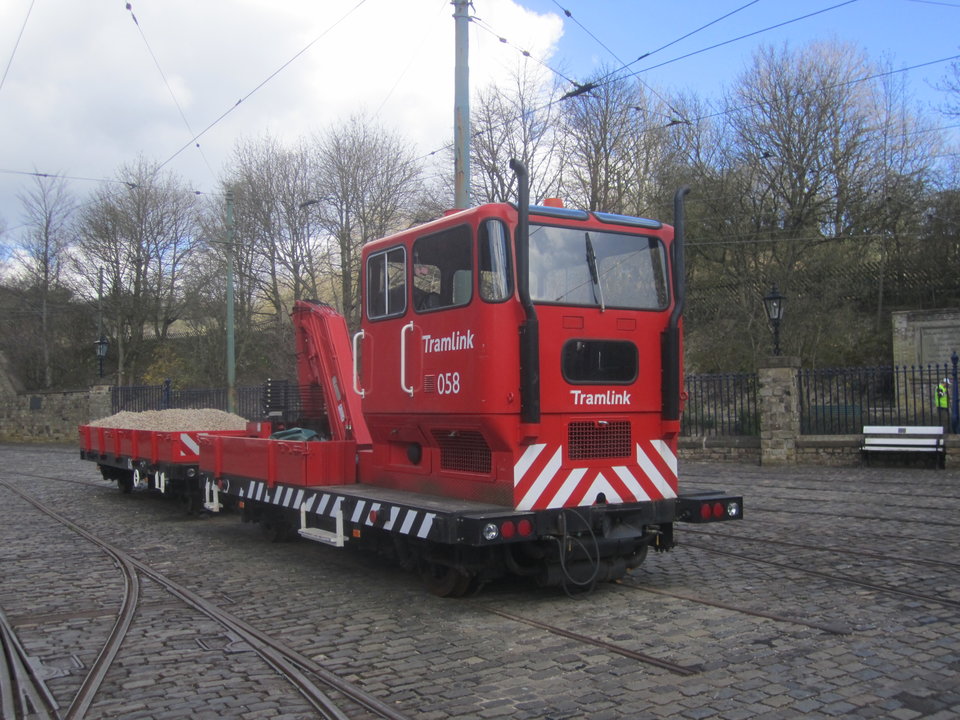 Because of a shortage of depot space, 058 and its trailer are generally to be seen on the stub track in the centre of the depot fan when not in operation.  This is also advantageous as it enables essential maintenance work to be undertaken around the site outside of the normal operational season, even when the depots are closed and the power supply is turned off.

Sold to Croydon Tramlink in 2006 together with flat bed truck; renumbered 058 and 061 and given London Transport red livery. Repainted in green after Tramlink was taken over by Transport for London in 2008. Sold to Crich Tramway Museum in 2009, arriving on 19th January 2010.