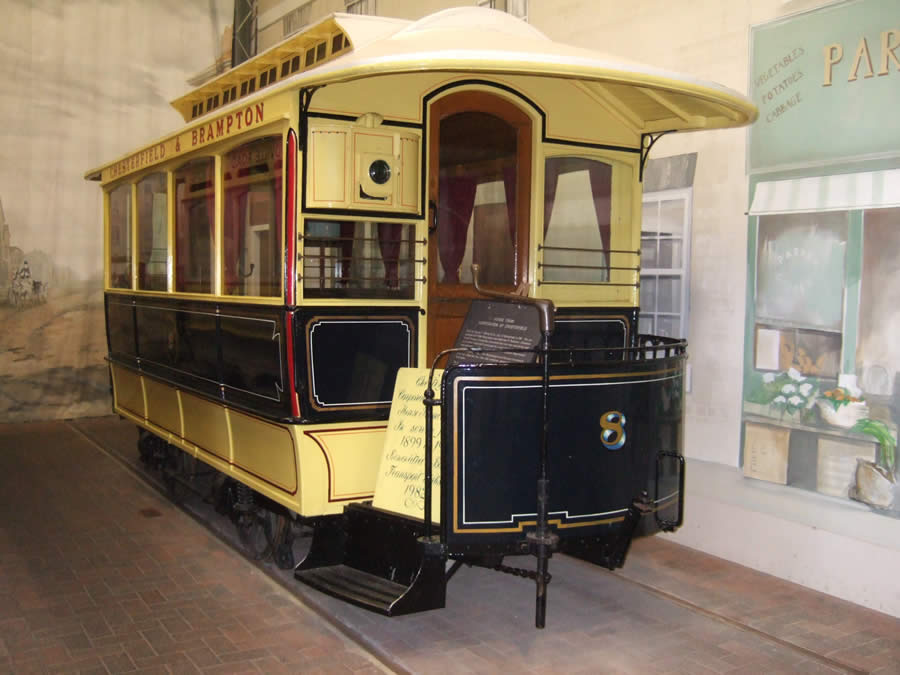 Chesterfield 8 – together with sister car no. 7 – were the last new horse-drawn trams to be added to Chesterfield Corporation’s fleet in 1899, when they cost £125 apiece and, although a further second-hand double-deck horse tram was bought from Sheffield (for £5) in 1903, all three were made redundant by the decision to convert the tramway to electric traction, a process that was completed by January 1905. With just five years in service, the tram was sold off and converted into a summer house in a private garden. Just before this happened, however, horse car 8 was photographed ceremonially with one of the new electric trams, which just happened to be car no. 7. Coincidentally, they were the only two Chesterfield trams to have survived and both have now been reunited at Crich, where they were photographed together again almost a century later, in 1997. Before this could happen, however, the tram was fortunate in being rescued in 1934 by the chairman of the Corporation’s transport sub-committee and transferred to Thornfield bus garage before being overhauled by Chesterfield’s Transport Department. This made it one of the earliest tramcars at the museum to have been taken into preservation, pre-dating the post-war inception of the tramcar preservation movement by over a decade. Initially painted in the Chesterfield electric tramcar livery of maroon and primrose yellow, number 8 then spent many years in storage until it was presented in 1956 – before the National Tramway Museum had even come into being – to the British Transport Commission, which moved it to London for a further period of storage.

Ownership of the tramcar passed to British Railways in 1962, shortly before the tramcar was exhibited for a time at the Museum of British Transport, which was based in Clapham. When this museum closed down in the early 1970s, ownership of number 8 was transferred to the National Museum of Science and Industry who placed it back in store once more. The tramcar did enjoy just a few brief moments of glory during this otherwise uneventful period, however. As long ago as October 1947 it was displayed for a time inside Nottingham’s Trent Bridge works to help commemorate Nottingham City Transport’s golden jubilee. On 14th May 1956 the tramcar made a brief return to its native town where it was displayed outside the Town Hall for a formal presentation ceremony to mark the transfer of ownership to the British Transport Commission.

It then made a return visit to Chesterfield on 21st April 1982, this time destined for a much needed restoration to be undertaken, once again, by the town’s transport department. The cost of the restoration – £5,000 – was forty times the original purchase price, however! An interesting discovery that came to light during the restoration was that the tramcar’s original livery had been Prussian blue and primrose and not the maroon and primrose livery that had been applied when the tramcar was initially taken into preservation almost half a century earlier. On 7th July 1982 the tramcar – resplendent in its ‘proper’ livery – was formally launched into service at the tramway museum in Crich by members of Chesterfield Transport Department and other dignitaries from the council. The tramcar covered 35 miles in passenger service during this initial period on loan to the museum before returning to Chesterfield to take part in the Transport Department’s centenary celebrations in September 1982. Less than three years after this, number 8 returned to Crich, this time on permanent loan from the Science Museum and was just in time to participate in a number of notable ‘firsts’. On 8th and 9th June 1985 horse, steam and electric tramcars ran together at Crich for the first time and just over a month later on 27th and 28th July Chesterfield 8 joined Sheffield horse tram 15 in passenger service together for the first time. A historic first, on the 8th and 9th June 1982, when horse, steam and electric traction were all exhibited at Crich for the first time. Photo courtesy of Crich TMS photo archive.

Over the next decade the tramcar clocked up a total of 120 miles in passenger service at Crich including a brief period in service on Santa specials in December 1989. The dash at the north end of the tramcar had to be replaced in 1991 after it was kicked by a horse (presumably an occupational hazard for this type of vehicle) and then in 1993 the tramcar had to be withdrawn because its wheel profiles were showing excessive wear.

Since then number 8 has mainly been displayed in the Great Exhibition Hall apart from brief sojourns for ceremonial duties. One of these occurred on 1st June 1997 when Chesterfield 8 was reunited with Chesterfield electric tramcar number 7 for the first time in almost a century to recreate a historic photograph.

In September 2016, ownership of the tramcar was passed from the Science Museum to the National Tramway Museum.