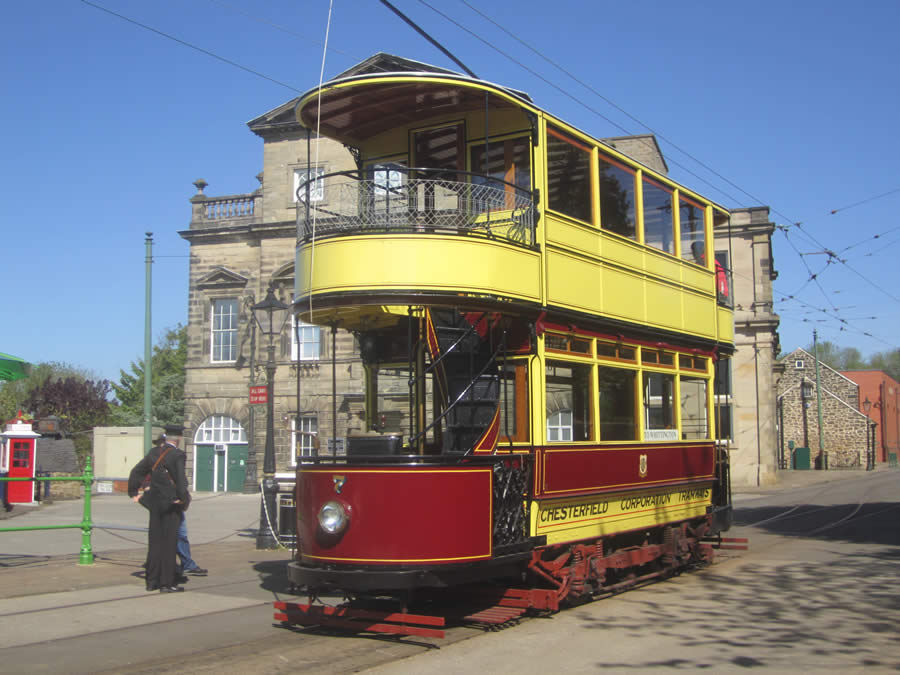 Chesterfield was one of the first towns in England to use electricity to light its streets, in 1881, but this early experimental initiative only lasted for a couple of years and it was not until 1904 that Chesterfield Corporation decided to build an electricity generating station with a view to electrifying and extending its existing horse-drawn tramway. Chesterfield 7 led a charmed – and celebrated – life. Originally built in 1904 as an open-topped double decker by the Brush Electrical Engineering Company at Loughborough, it narrowly escaped destruction in a severe fire which gutted the Corporation tramshed in October 1916. Car 7, which was damaged in the blaze, was restored and a top canopy was added later at the start of 1919. In common with many other tramway undertakings at the time, receipts from fares barely serviced the loans taken out to build the tramway and when the trackbed and components began to wear out, replacement – initially by trolleybuses – afforded a cheaper option than renewal of the tramway. By the time it was pensioned off, following the closure of the system on 23 May 1927, Chesterfield 7 could already claim to have been the most photographed tram of the 18-strong fleet. Numerous photographs survive of its arrival by rail and its first horse-drawn journey from the sidings to the new tram depot. These were followed by a series of ‘out with the old and in with the new’ pictures of the tram posing alongside the soon-to-be displaced horse car number 8 (coincidentally also now restored and displayed at Crich). Model depicting Chesterfield 7 after its conversion into a holiday home at Two Dales near Matlock. Photo: Jim Dignan.

Its charmed life continued even after withdrawal as number 7 was initially sold off in 1927 (in common with much of the rest of the fleet) and converted into a holiday home with the two decks sitting side by side in a field in the picturesque setting of Two Dales, north of Matlock. While there it experienced a kitchen cooker explosion which demolished one of the platform ends in 1934, was burgled by Italian prisoners-of-war, used as a honeymoon location in 1949, narrowly avoided a moorland fire in 1963 and provided a comfortable home for an elderly lady for fourteen years from 1954 to 1967.

Indeed it remained there until it was sold to the Tramway Museum Society for £10 in 1973 by a man who had bought the converted tramcar for use as a holiday cottage, having previously ridden to school on it in Chesterfield as a young boy. The tramcar was initially put into storage while other trams received precious workshop space and labour on the road to restoration.

Eventually an offer of funding was made by the Tramcar Sponsorship Organisation and the ambitious process of restoring a tram that had not turned a wheel for 65 years could begin in 1993. By the end of 1996 the mammoth task of refurbishing the original shell and tracking down and restoring missing parts from other derelict tramcars (including some obtained from sister car no. 9) was complete and Chesterfield 7 was able to return to service as a fascinating example of an extremely local tramcar with an intriguing history.

The tramcar was ceremonially launched into passenger service on 17th May 1997 and shortly afterwards it was photographed with Chesterfield horse tram no. 8, thereby recreating an image that was originally captured back in 1904. Since then it has run in service on a very regular basis and has occasionally returned to the limelight when decorated for ceremonial duties that have included the 150th anniversary of British tramways in 1910 and the royal wedding of Prince William and Catherine Middleton in 1911. Most recently it appeared a First World War recruitment tramcar and appeared in this guise at regular intervals throughout the 2015 season.

Sold as holiday cottage and sited in Two Dales, Derbyshire

1973 – Semi-derelict property purchased by TMS
1993-6 – Restored to operational condition at a cost of £120,000, paid for by the Tramcar Sponsorship Organisation.

Current status
Restored in operational condition. Commissioned for service as part of the operational fleet during the current season.
Date started operating at Crich
1997. Has operated during 25 seasons up to and including 2021.
Total mileage covered at Crich
20,633
Current location
Depots