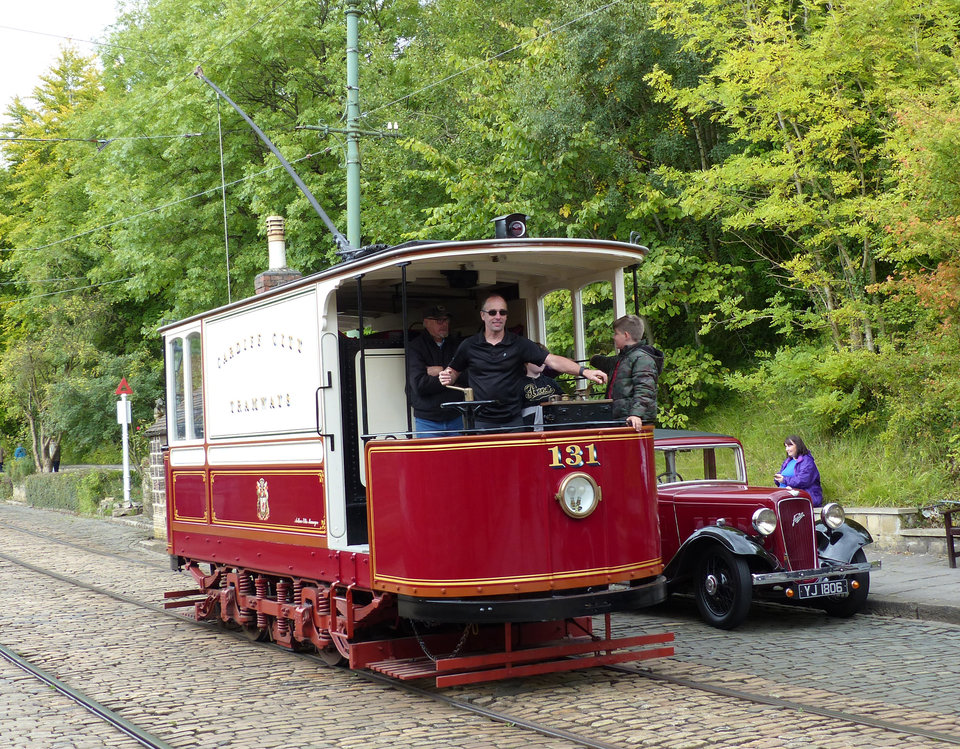 At the dawn of the electric tramway era, horses were still the predominant mode of traction for road vehicles and in London alone 300,000 plied the city streets at a time when the total number of motor vehicles in the whole of the country was just 17,000. Moreover, the state of the roads was often deplorable as the patent for tarmac, which involved the mechanical mixing of tar and aggregates to form a more durable weather-resistant surface, was not granted until 1901.

Not surprisingly, therefore, an abiding preoccupation for early tramway operators was the need to keep the streets reasonably clean to ensure that tramlines did not become completely blocked with mud and animal waste. An important weapon in their armoury was the water car and many operators found it necessary to incorporate at least one as part of their fleet even though – partly because of their unglamorous role, perhaps – only one was to survive into preservation.

This was built in Preston by the Electric Railway & Tramway Carriage Works as a 1000-gallon rail-cleaning car for Cardiff, at a cost of £600. It was delivered as a completely open car, with a central water tank, gaining the number 131 in 1905. By 1913 the tank had been enclosed, and in 1919 it was fitted with slipper brakes. At one time it was thought to have carried a revolving broom.  From 1920 it was used for grinding out corrugations on the track around Cardiff, and it was also used to take the traffic superintendent home to Cathays after the day’s operations had been completed.

In 1913 it was painted in the full passenger livery, but around 1916 it became plain grey (the livery typically used for such tramway works cars), then ten years later it even lost its number, after which it was referred to by tramway staff as “Polly”. It then continued in use as a general permanent way and stores van until 1947 when it was fitted with snowploughs in lieu of lifeguards and also replacement motors that were recovered from an open topped bogie car that was bring scrapped.

In addition to its essential maintenance functions, Cardiff 131 – in common with other works cars – was frequently used as a driver training vehicle since passenger tramcars were too valuable and often too heavily utilised to be deployed for this purpose. It was last seen in use in May 1949.

But it was to have a happier fate than the remaining Cardiff passenger cars. At the end of the Cardiff tramways enthusiasts enquired whether one of these trams together with the water car might be preserved, only to be told that all the passenger cars been sold for scrap already. However the little water car had fortuitously been overlooked, possibly because, in the absence of a number, it was omitted from the inventory of tramcars that were destined for the scrapyard. 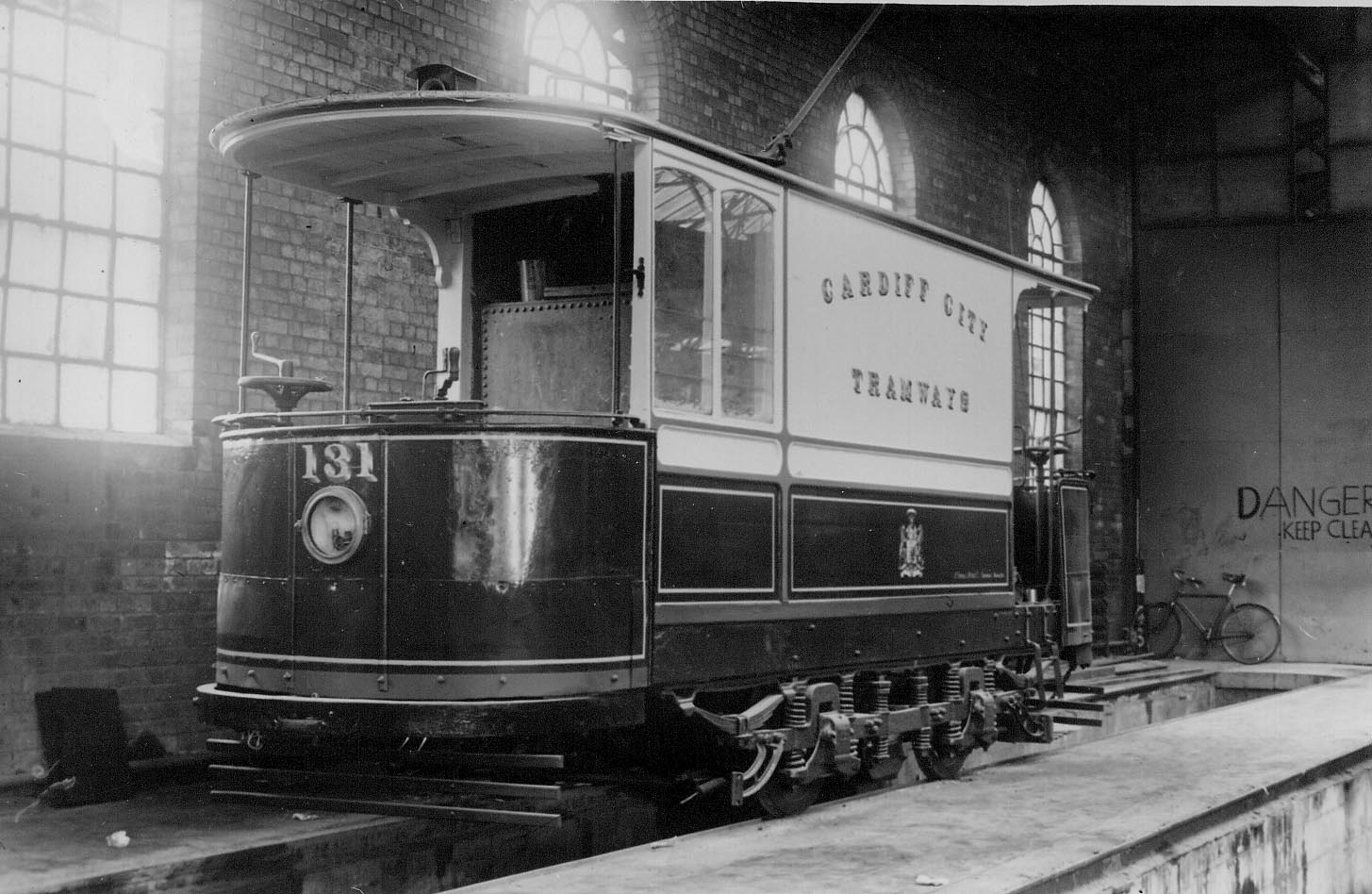 Cardiff 131, photographed in Roath depot by R..B. Parr in January 1951, shortly after its refurbishment and repaint.

Accordingly, it was then presented to the Museum Committee of the Light Railway Transport League (forerunner of the Tramway Museum Society) together with an undertaking that it could remain in storage in the depot at least for the time being. In the event, it remained there until March 1951 during which time it was repaired and repainted by volunteer enthusiasts to look as far as possible as it had done in 1913. 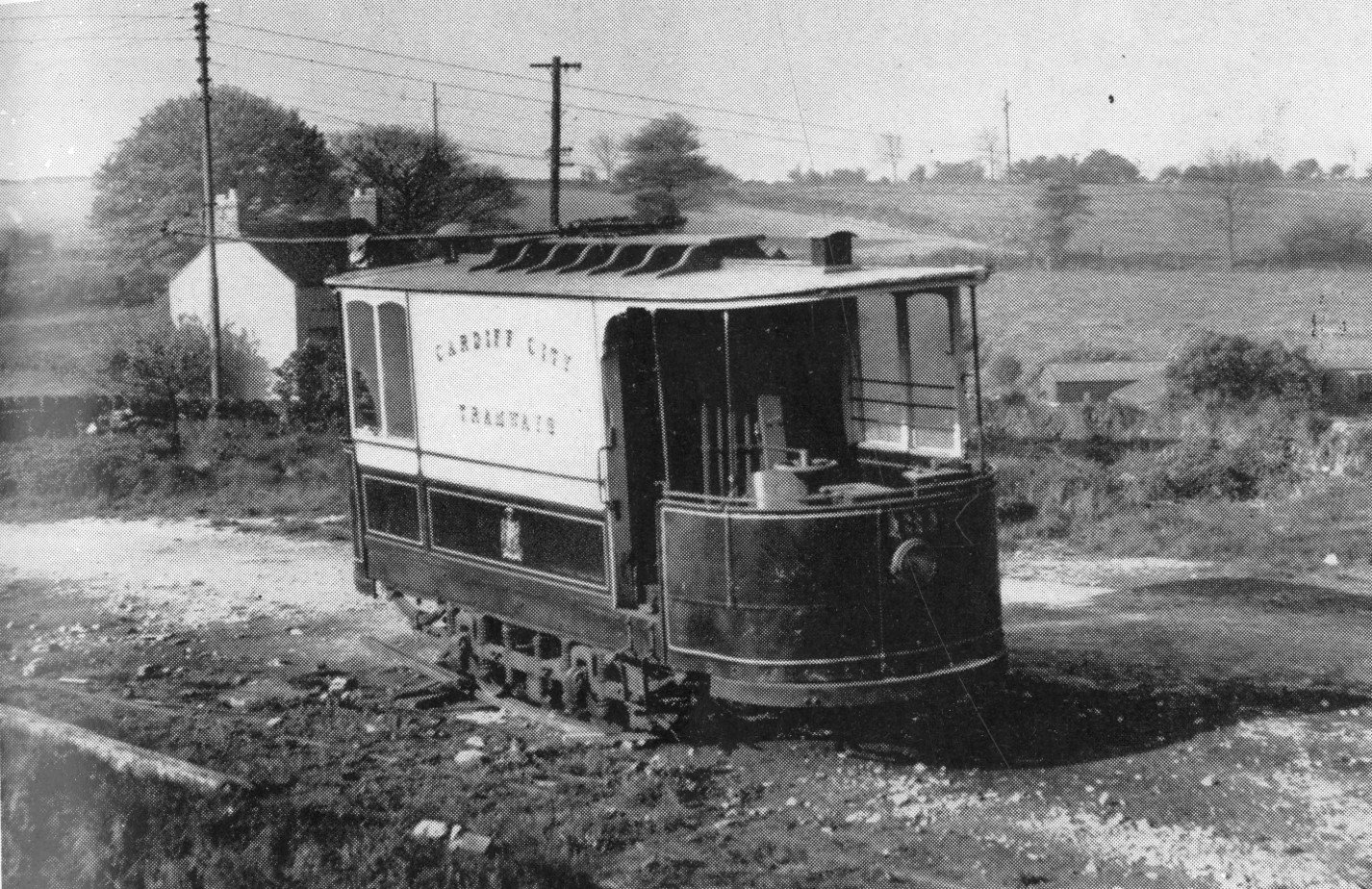 The start of a new era for the tramcar preservation movement. Cardiff 131 was the first tram to arrive at the newly acquired site at Crich. Photo courtesy of Crich TMS photo archive, May 1959

Following a ‘notice to quit’,  the tramcar then led a somewhat nomadic existence, spending time in a Cardiff heavy haulage contractor’s yard (until 27th October 1952) and a Gloucester timber yard where it spent the next 6.5 years.  While there, its ownership was transferred to the newly formed Tramway Museum Society in 1955.  Eventually, however, 131 acquired the distinction of being the first tramcar to arrive at the Crich site in May 1959, shortly after its acquisition by the TMS a few months earlier. Sadly, there was little room for sentiment in those early days as recently rescued tramcars from around the country quickly began jostling for the limited depot space and workshop attention. So it was that Cardiff 131 was placed in the museum’s off-site storage facility in May 1971, an unfortunate fate for the only surviving purpose-built water car in Britain. 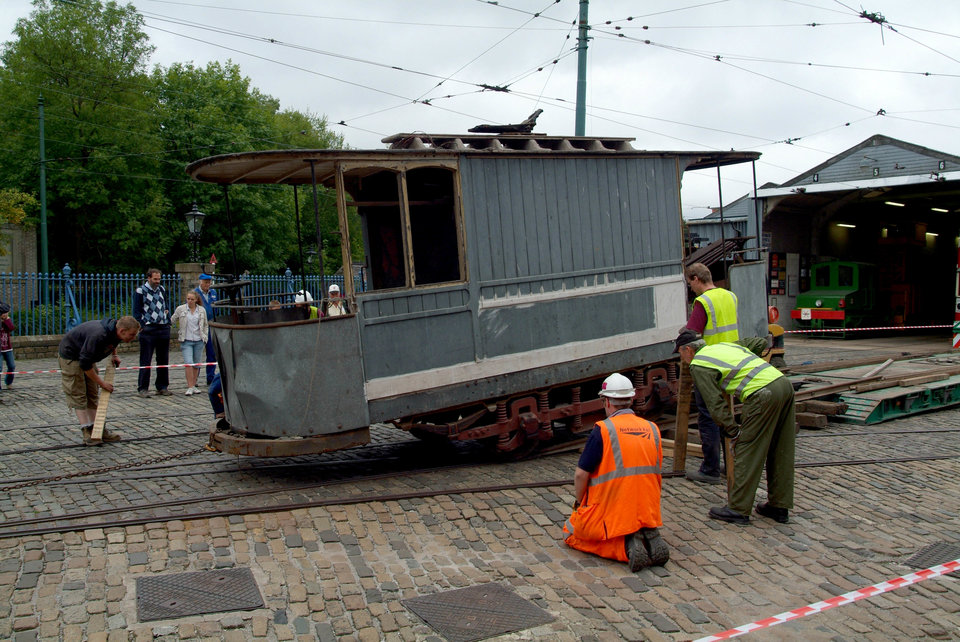 Cardiff 131 arrives back at Crich at the start of its restoration project on 3rd September 2007. Photo courtesy of TMS archives.

Over thirty years later, however, and with an important 50th anniversary looming since the acquisition of the Crich site, time and resources were finally made available in 2007, thereby enabling this fascinating vehicle to be fully restored in time to take pride of place in the 2009 anniversary celebrations. 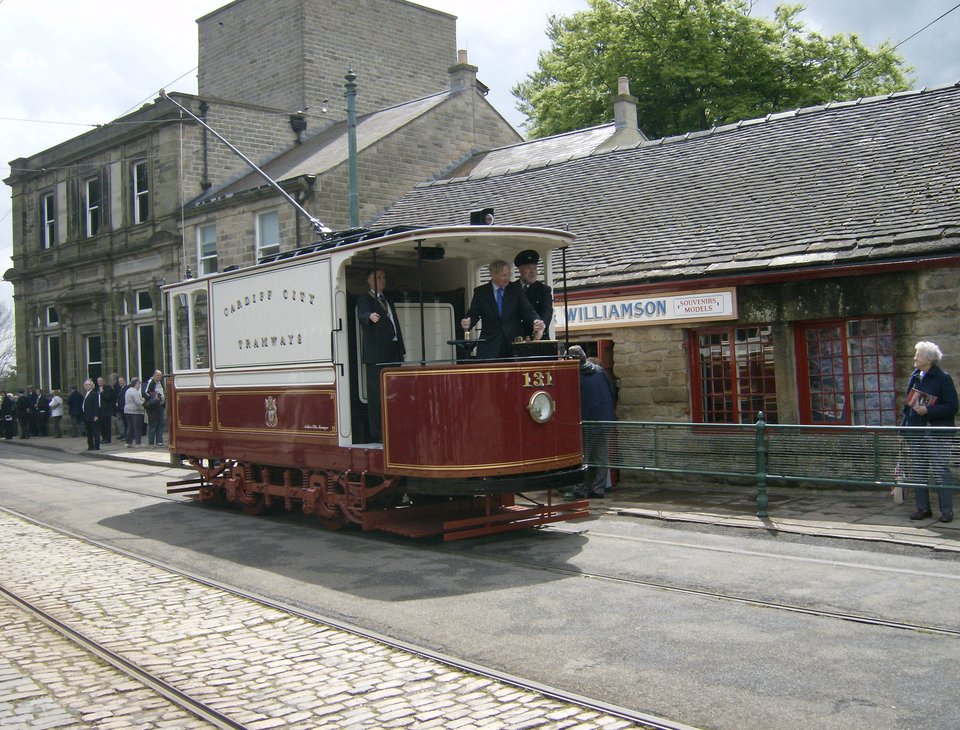 50 years on, the appearance of the tramcar – and the museum site – had been transformed. Photo courtesy of Crich TMS photo archive, May 2009

After its restoration, for which it won a prestigious award from the Heritage Railway Association, Cardiff 131 has visited Beamish museum in County Durham in 2010 and also Blackpool in 2011, where it assisted in cleaning the tracks between Pleasure Beach and Starr Gate in preparation for the trial running of the new second-generation Blackpool trams. 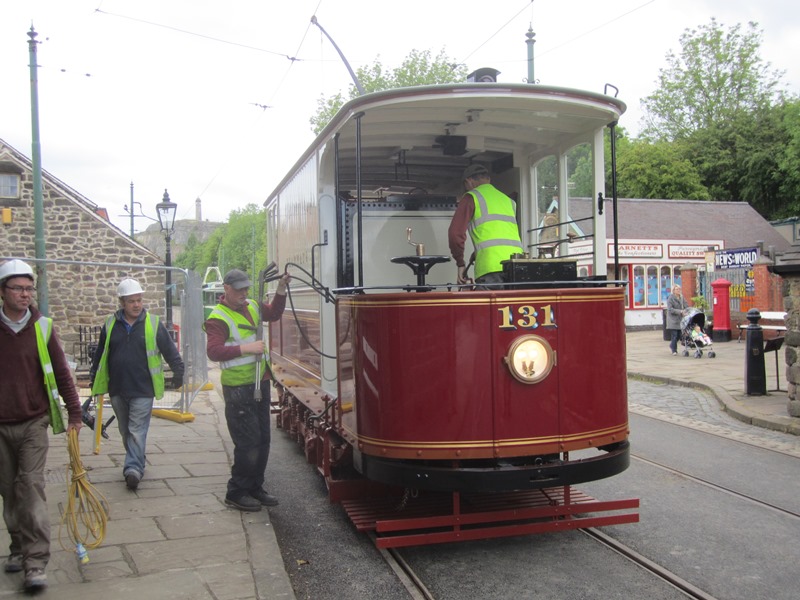 Now part of the regular operational fleet at Crich, it performs an important role preparing and maintaining the track each season.  One of its earliest tasks is to scrub the rails and flush out the grooves before the season gets under way. 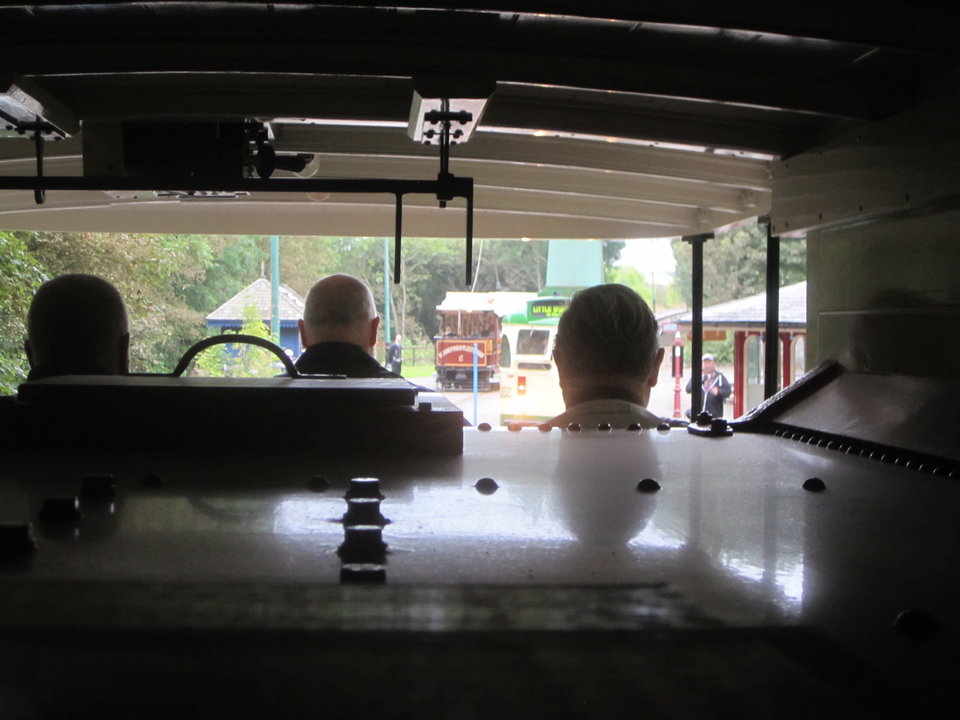 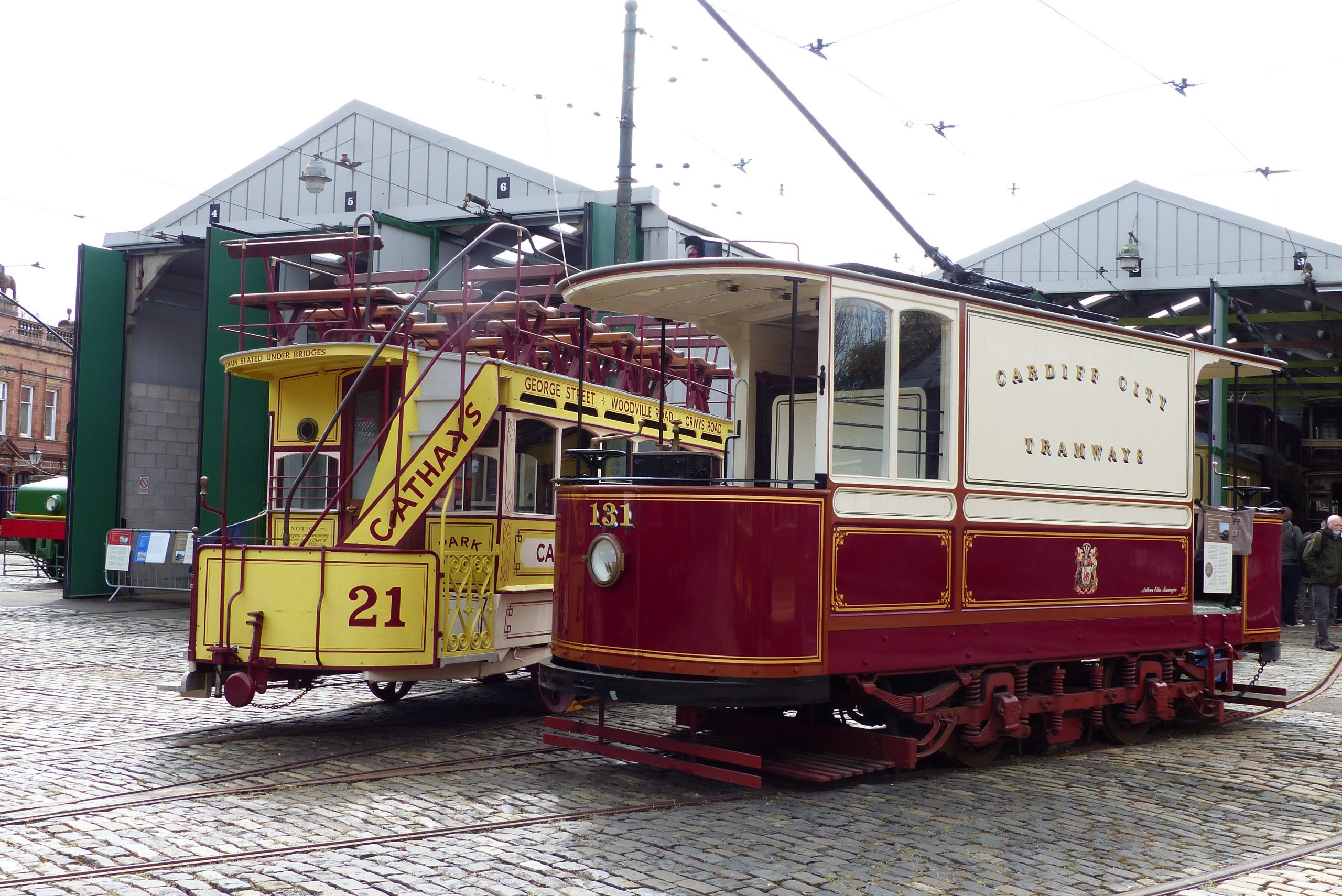 Two Welsh tramcars pose together in the depot yard shortly before the Cardiff horse tram was due to return to Wales following the expiry of its long term loan to Crich. Photo: Jim Dignan, 2/5/2021.

In 1913 the previously open sides were enclosed by matchboard panelling and a roof structure. In 1919, track brakes were fitted and, the following year, these were modified to take carborundum blocks, which enabled the tramcar to be used for rail grinding.
In 1947 its lifeguards were replaced by snow ploughs and the car was given replacement motors that had been salvaged from a redundant passenger tram.

Acquired for preservation on withdrawal

It was preserved by members of the Light Railways Transport League, who overhauled it after its withdrawal, and repainted it back into the attractive livery of the Cardiff passenger trams. They arranged for its temporary storage in a variety of locations before its arrival in Crich in May 1959, the first tramcar to appear on site.
The car was painted in grey primer in 1968 and on 13th May 1971 it was moved to the museum’s off-site storage facility.
It returned to Crich in 2007 to enable a full restoration to be undertaken.

Current status
Restored to operational condition. Commissioned for service as part of the operational fleet during the current season.
Date started operating at Crich
2010. Has operated in 10 seasons, most recently in 2019.
Total mileage covered at Crich
586
Current location
Depots