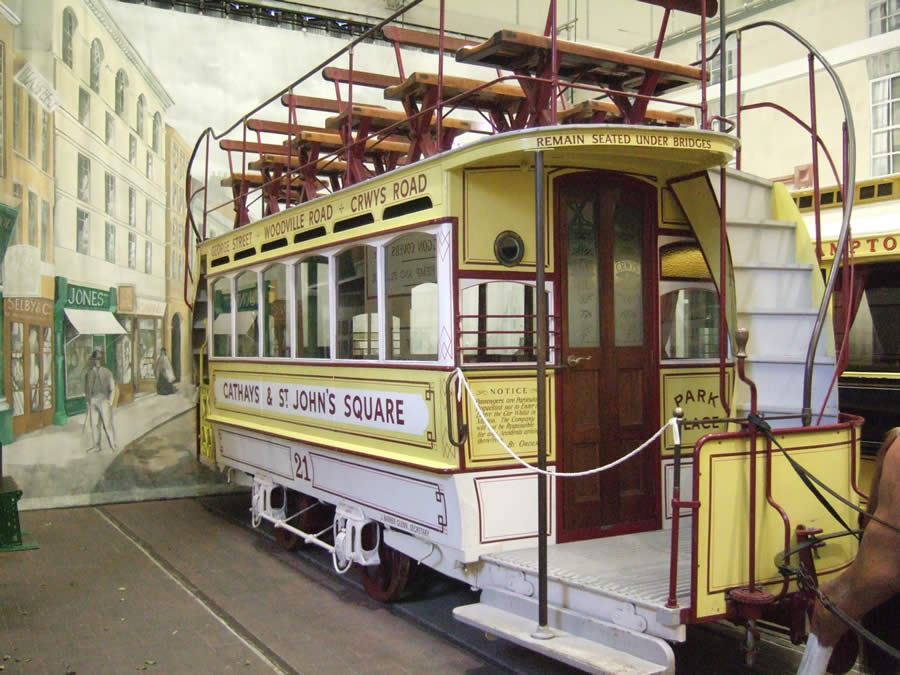 A horse-drawn tram service was introduced by Cardiff Tramways Company on 12th July 1872. The initial service ran from High Street in what was then the town centre (Cardiff did not become a city until 1905) to the Docks, and eventually 6 miles of route were operated. The company was a member of the Provincial Tramways group, which also operated horse tramways in Plymouth, Portsmouth and Grimsby. This particular tram operated on the town’s Cathays route, which helps to explain the colour scheme since each route was colour-coded, to ensure that all passengers could tell which tram they needed even if they couldn’t read. Unlike earlier double deck horse trams, which tended to have back-to-back ‘knifeboard seats’, this one had reversible transverse garden seats on the upper deck, enabling it to carry up to 40 passengers, though two horses were needed for such loads. Horse tram 41 on the Royal Oak to Pier Head tram route, circa 1890.  Photograph by kind permission of WalesOnline

The warning at the top of the stairs to upper-deck passengers to remain seated under bridges was a sensible precaution in view of the number of low railway bridges on many of Cardiff’s horse tram routes. As a “low height” tramcar with a flat ceiling, it was well adapted for service on such routes.

The service continued to operate until the company was taken over by the Corporation on 1 January 1902 and a programme of electrification commenced almost immediately. It is not known precisely when the tram was taken out of service, though the conversion of the Cathays route was completed on 13 June, just six months later.

After being taken out of service, number 21 was sold to the Cardiff Ladies Temperance Guild and converted into a tea-bar selling non-alcoholic beverages to dockers at Roath Dock in Cardiff.  There it remained for over sixty years, though it changed hands in about 1930, when it operated for a while as ‘Walter’s Tavern’.

The refreshment stall finally closed in 1966 and was removed from the docks in 1968.  Three years later it was donated to the National Museum of Wales, which restored it with support from the Manpower Services Commission.  Its restoration was completed in 1983 and the tramcar was then displayed at the now-closed Welsh Industrial and Maritime Museum in Cardiff, before moving to the Nantgarw Collection Centre, a few miles north of Cardiff. 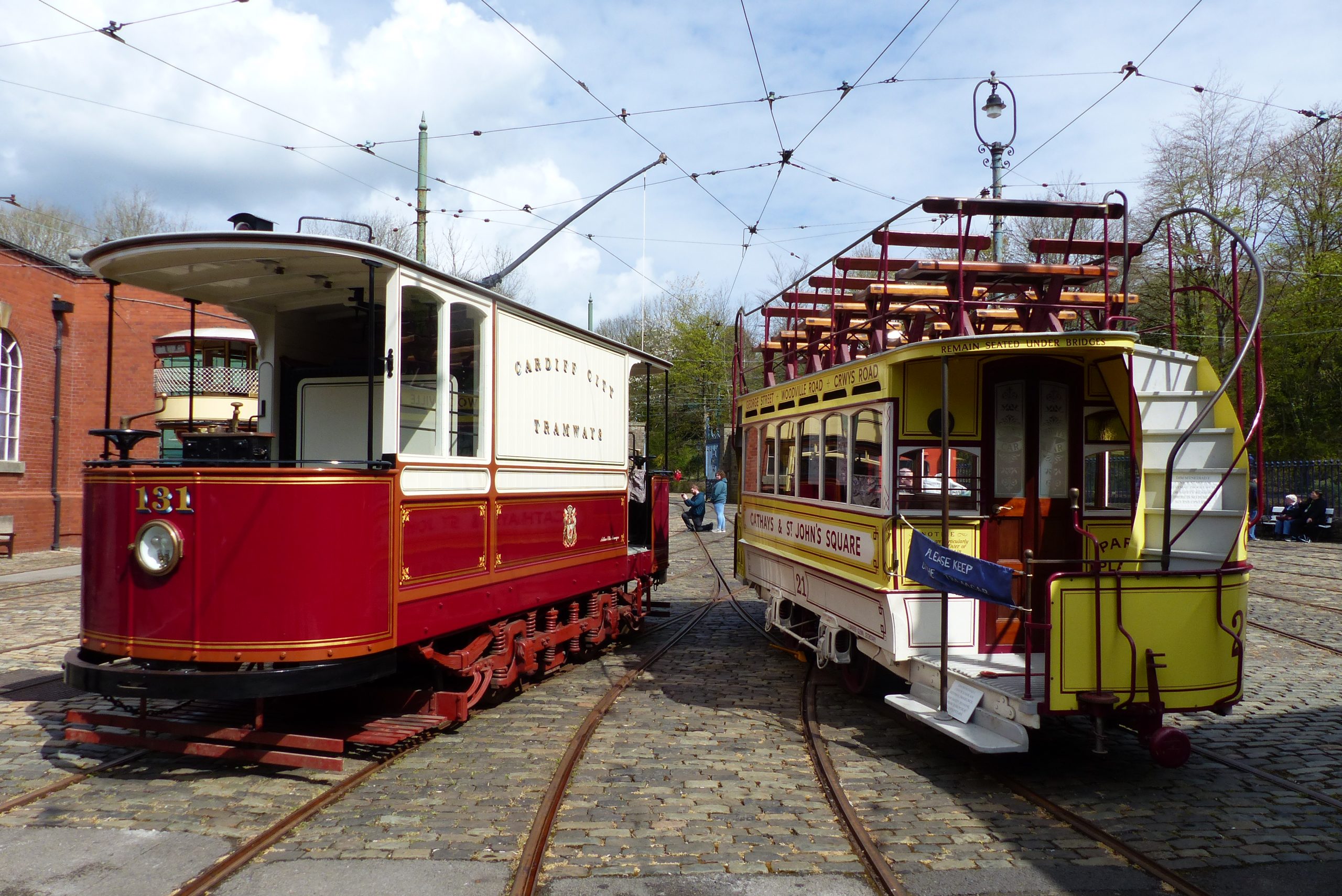 Then, in 2009, it was borrowed by the National Tramways Museum so that it could join forces with newly restored fellow Cardiff tramcar 131 for a joint appearance at the Crich 50th anniversary celebrations.  This has led to an extended stay at the museum as part of the display in the Exhibition Hall.  . 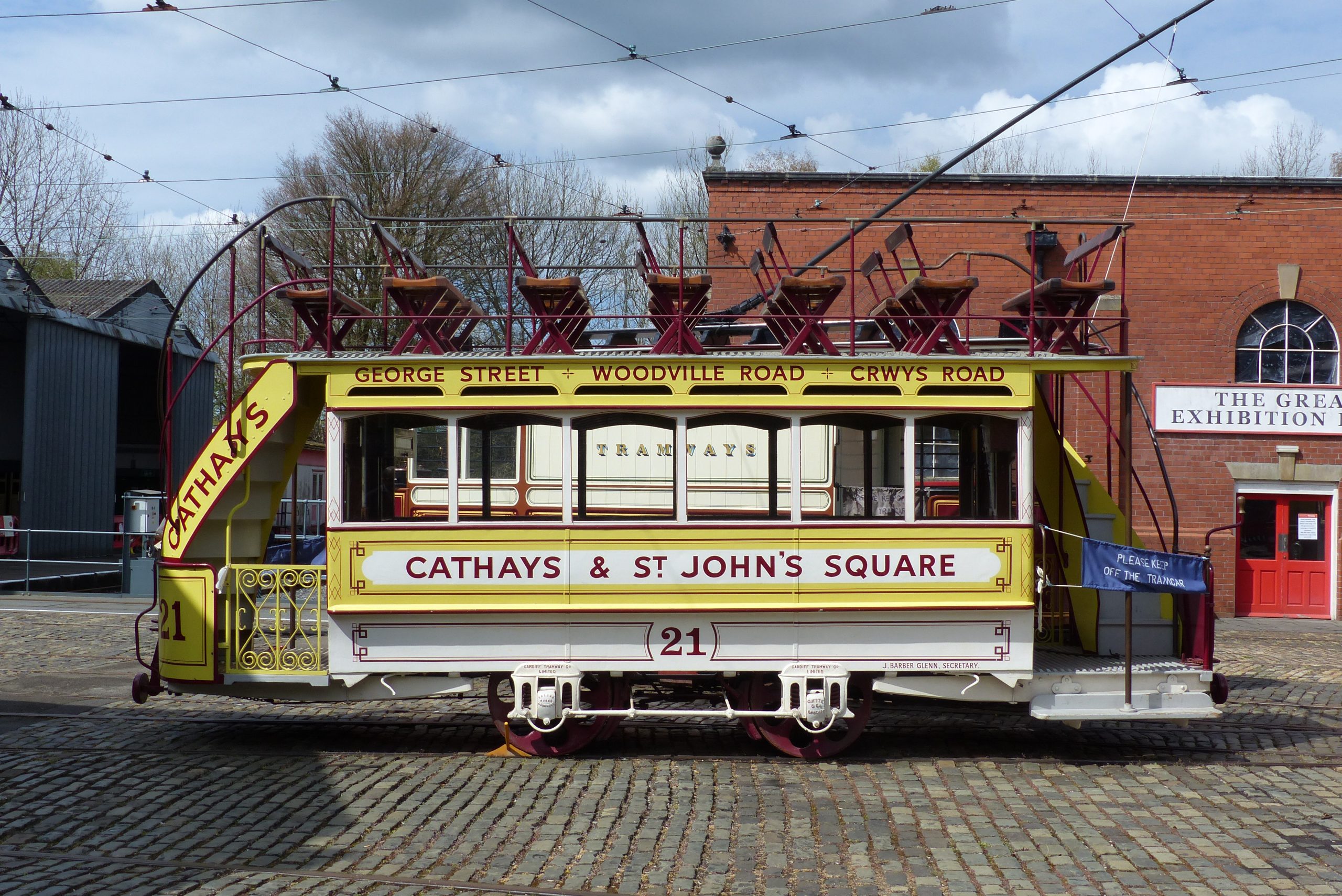 Cardiff 21 enjoying a brief moment of glory in the open air on 2/5/2021, shortly before its return to Cardiff at the end of its long-term arrangement. Photo: Jim Dignan

This long-term loan terminated in 2021, and the tramcar returned safely to the National Museum of Wales on 17th June, drawing to a close a lengthy association with an attractive and popular tramcar.

After being taken out of service, the tram was used as a tea-bar for over 60 years before being donated to the National Museum of Wales in 1971.

Its restoration was complete in 1983.

Formerly on loan from the National Museum of Wales but now back in their care.