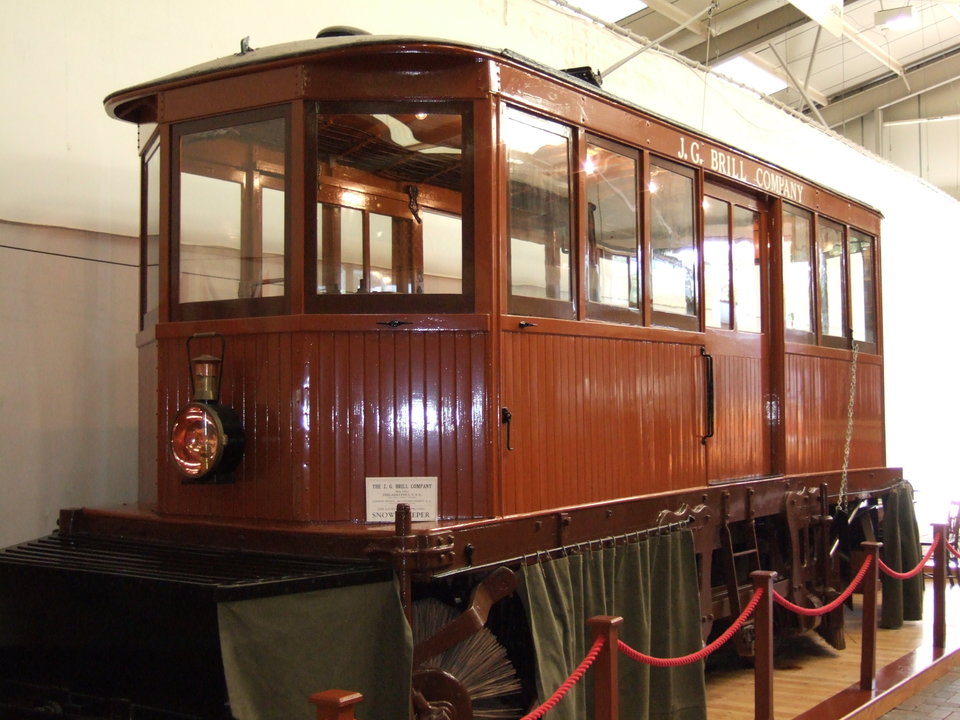 Snow could be a major problem for tramway operators, particularly in parts of the world such as North America and Central and Northern/Western Europe that were prone to severe winter weather. In the early days the only solution was to purchase one or more purpose-built snowbrooms to help keep the tracks clear enough for the trams to get through.

Brussels 96 is an excellent example of this type of specialist vehicle and was one of 360 snowbrooms to have been built by J.G. Brill & Co of Philadelphia, which for many years was the largest tramcar manufacturer in the world. Although they produced more than 45,000 tramcars (or ‘streetcars’ as they were known in the States) – more than any other manufacturer – 96 is the only example of a Brill tramcar in the collection as well as being the only surviving snowbroom (and indeed the only complete Brill tramcar) in the United Kingdom. Leeds operated five similar cars, also built by Brill, to keep its tram system clear of snow in the harsh Yorkshire winters but none of these survived into preservation.

The tramcar’s important function is clearly reflected in its design, with a very high clearance between the tramcar’s body and trucks in order to accommodate the huge revolving brushes made of rattan – somewhat like giant bottle brushes.

The distinctive Brill design of snow sweeper made use of two short brooms – one located at the front and one at the back end of the car – each of which swept one of the tramlines and half the track. Other manufacturers favoured a single rotating brush positioned under either the front or centre of the tramcar. The advantage claimed by the Brill design was that shorter brushes could be set at a greater angle, which would enable the snow to be swept clear of the tracks, instead of just being pushed forward as would happen with a longer broom.. Another distinctive feature of the car is its three motors, two for powering the vehicle and the third for operating the brooms

Brill snowbrooms were built for both the home and export market and Brussels 96 would have cost around $1,100 when new. This substantial cost for a non-revenue earning vehicle was one reason why many tramway operators in later years sought to economise by converting redundant passenger trams to snowbrooms at the end of their working life. One such example from the collection is LCC 106, a tram which owes its survival to the fact that it was converted into a snowbroom (022) at a time when its contemporaries were either being scrapped or sold to other operators. Another example is Sheffield 46 which was converted into a snow plough in 1920 when no longer needed as a passenger car.

The Brussels snowbroom is one of two that were ordered for the city’s undertaking in 1903 and 1906. On arrival, these were numbered 95 and 96. Number 96 was allocated to Schaerbeek depot, which serviced routes 53 and 58. Various modifications were made to the tramcar over the years, one of the main ones being a rebuilding of the tramcars ends so that they more closely resembled a ‘Brussels standard car’ of the 1930s. Electric front lights, direction indicators and side-lights were also added over the years. In common with other works vehicles in the fleet, number 96’s original brown livery was replaced by a brown and white striped livery after the second world war. Photo courtesy of Crich TMS photo archive. Brussels 96 in the depot soon after its arrival on 5th June 1995.

After more than 60 years in service the by now redundant Brussels 96 was withdrawn around 1975 and was acquired by the West Yorkshire Transport Museum at Bradford in 1987 where it remained for a time. It was bought by the Tramway Museum Society in 1995, one of the main justifications being that it was an authentic Brill tramcar; an added bonus was that it very closely resembled the former Leeds Brill snowbrooms. The tramcar was always intended as a static exhibit and, in view of its historical significance, it was decided to restore number 96 as far as possible (cosmetically at least) to its ‘as new’ condition so that it could appear as a J.G. Brill ‘showroom’ exhibit as part of the 1905 Trade Exhibition that formed the main display in the Great Exhibition Hall at the time. 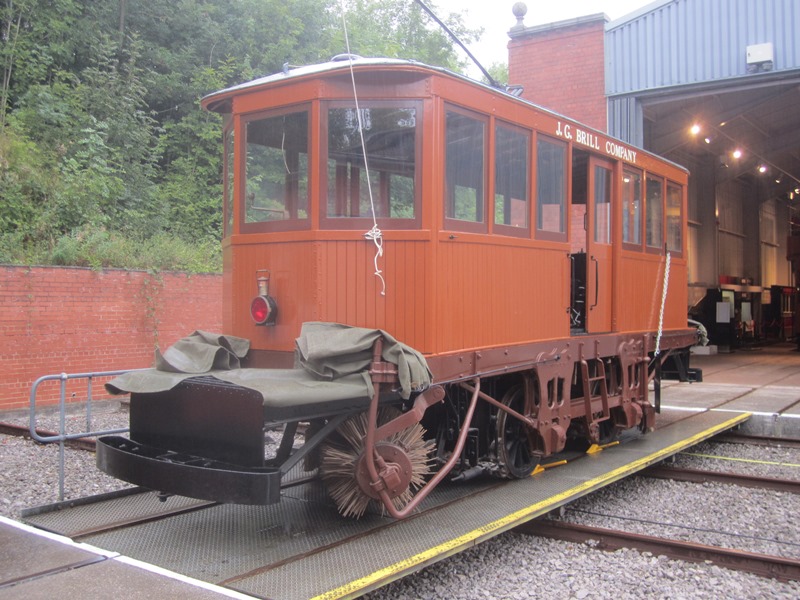 Brussels snowbroom pictured on a rare excursion out of the Exhibition Hall on 13/9/2013. Photo: Jim Dignan

Number 96 remains on display in ‘showroom’ condition and has never run at Crich. However, its sister car – Brussels 95, which dates from around the same era – has also been preserved and this one has operated again under its own power at least once, in Brussels, in October 2012. This tramcar, which preserves the modifications that 96 exhibited when it first arrived at Crich, can be seen at the Brussels Transport Museum.

1930s Both ends of the car rebuilt to resemble a standard Brussels passenger car of the period. Original oil lamps replaced by electric lights at around the same time and air brake system fitted..
1939 direction indicators fitted
1940 electric side lights added
End of World War II repainted in brown and white livery.
1950s base of trolley pole modified.